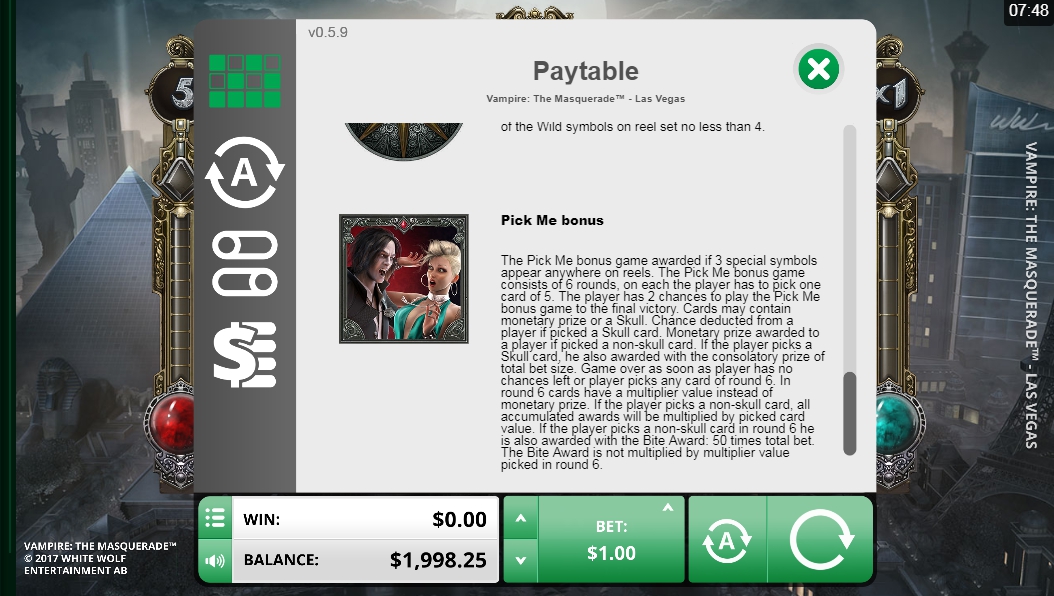 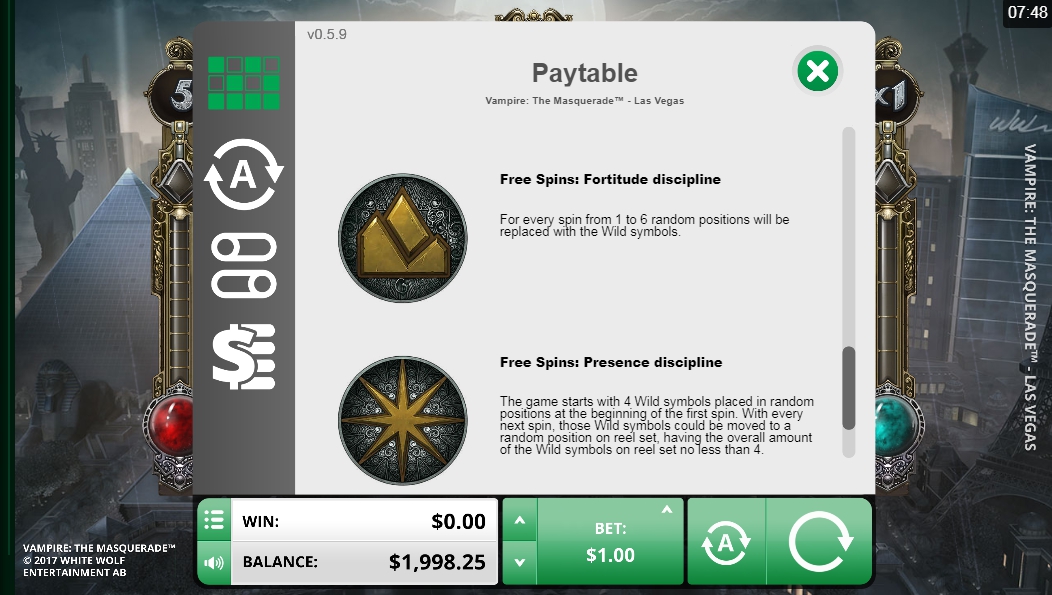 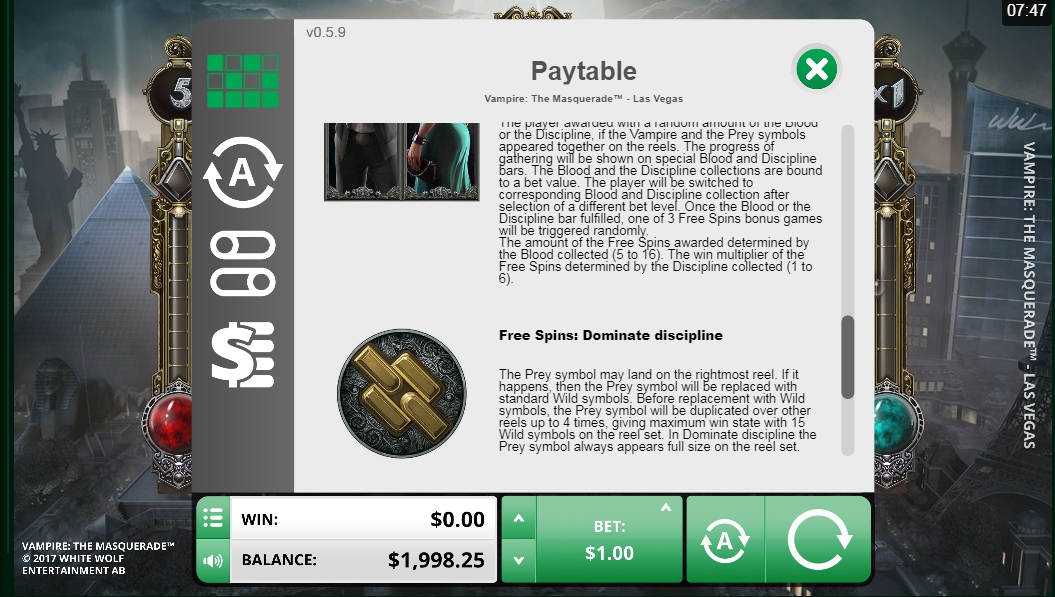 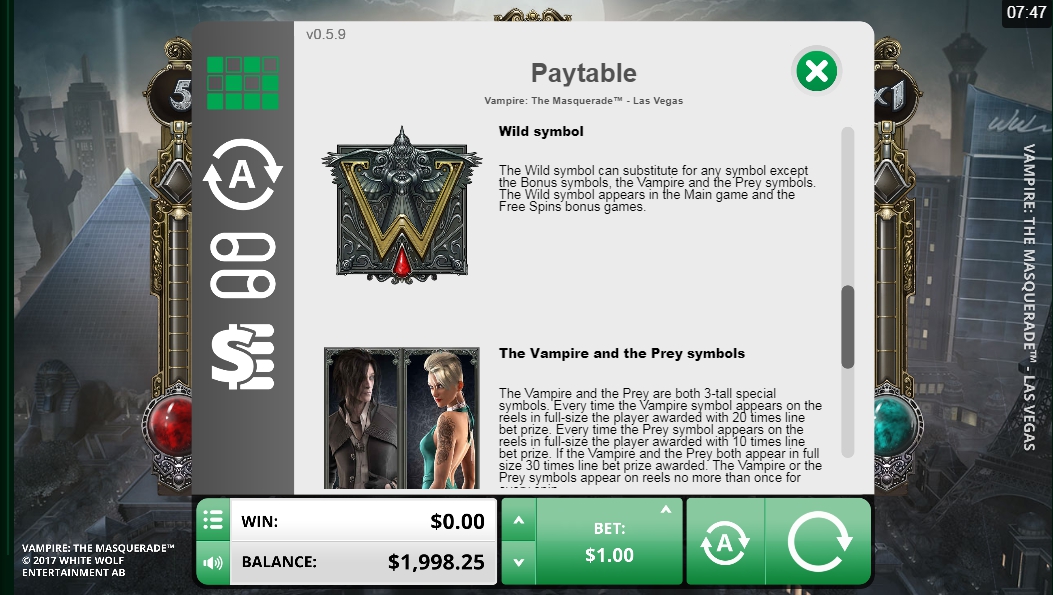 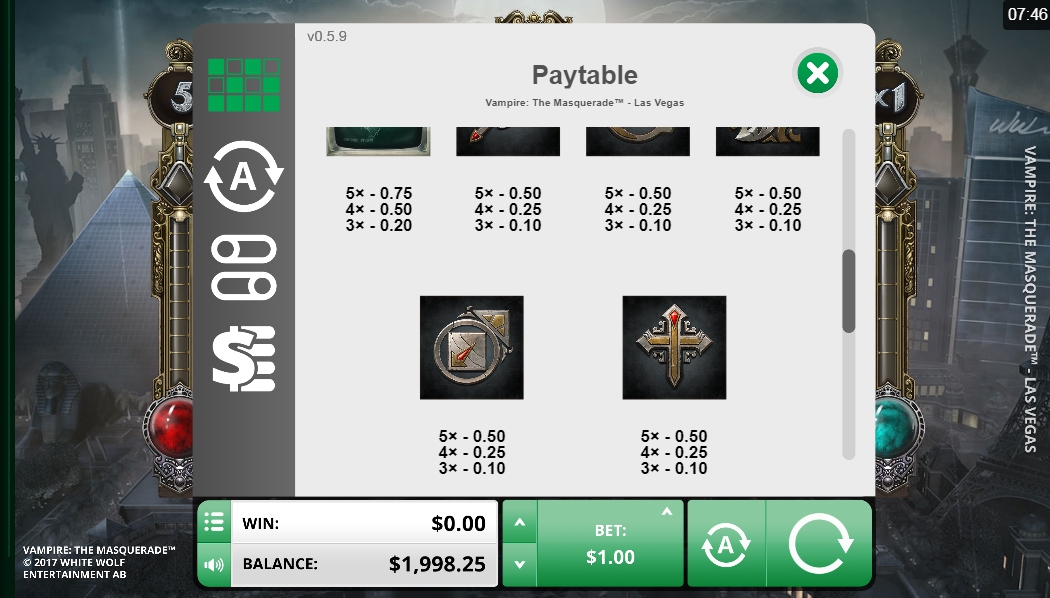 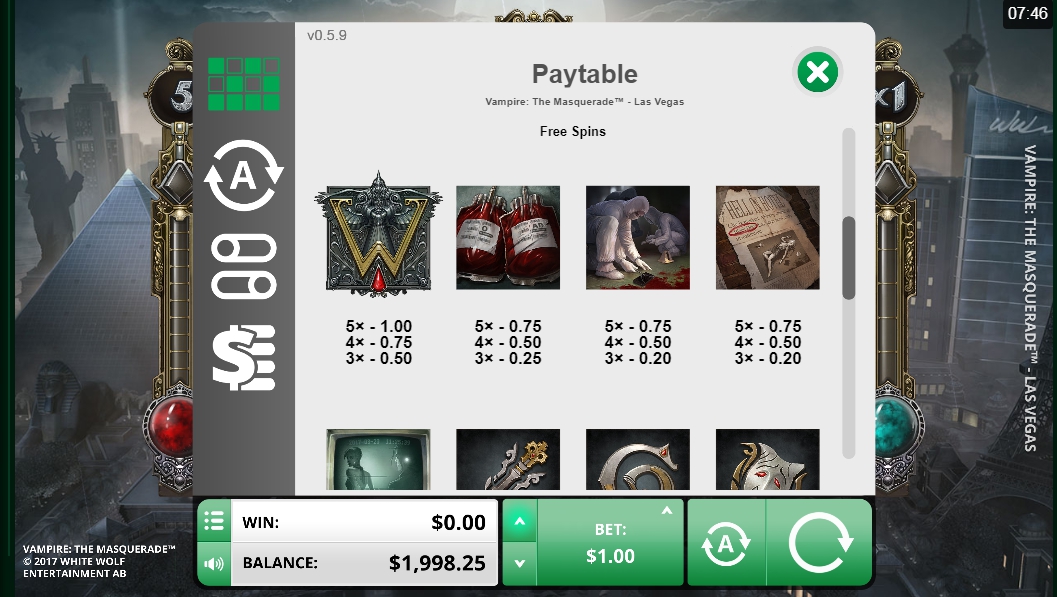 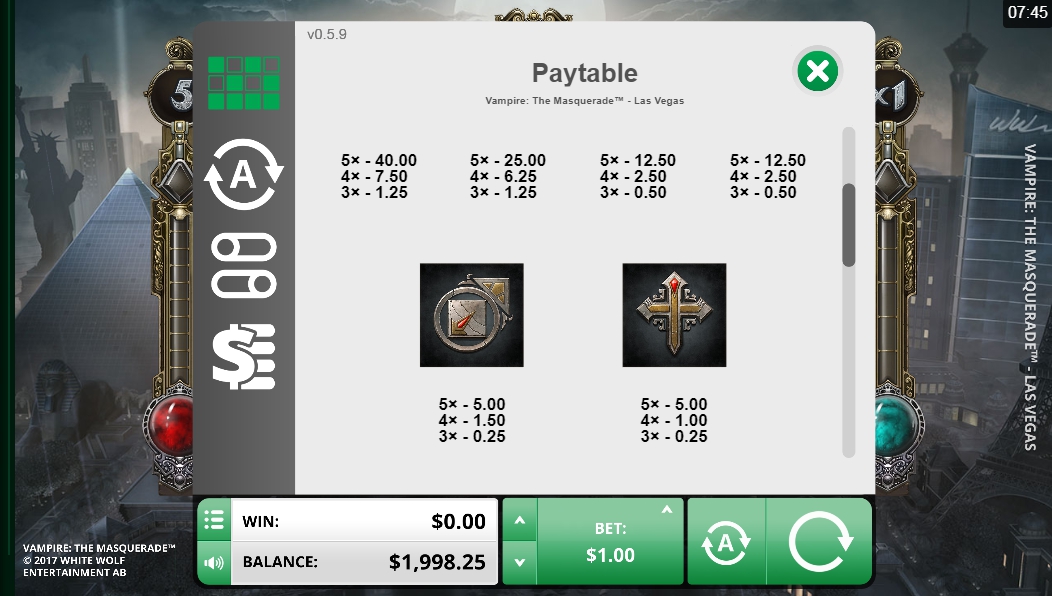 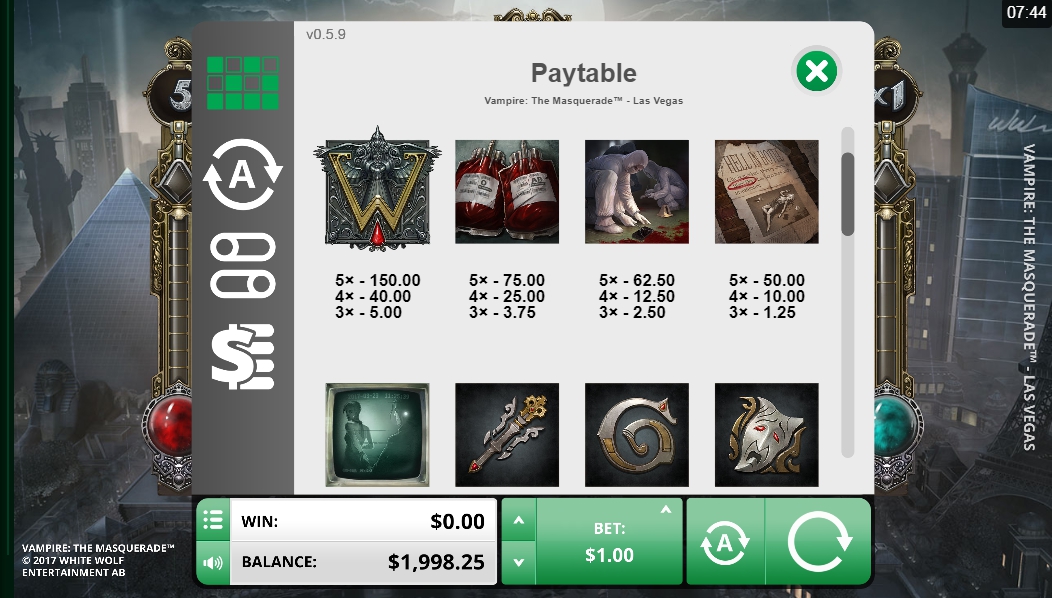 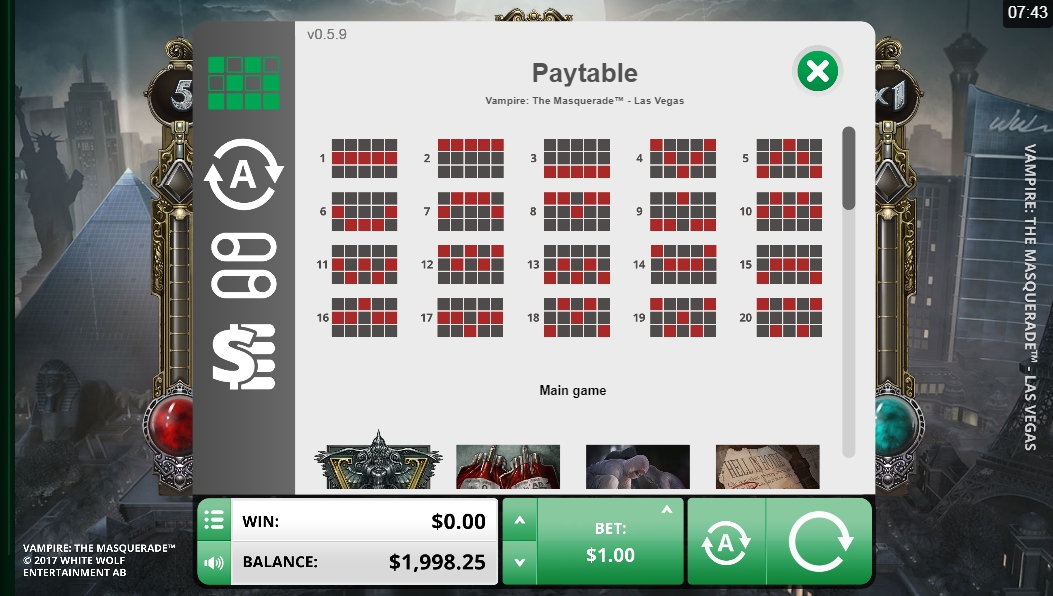 Vampire is a mythological creature. It is a corpse from the grave or a bat, which sucks blood. It is considered they were criminals and people who died due to suicides or vampire bites. The vampires have always been an attractive character for the cinema and novels. There are a lot of fantastic novels, films, and games about these creatures, their customs and aspirations.

One of these performances will take place on five reels and twenty pay-lines of the Vampire: The Masquerade – Las Vegas online slot machine developed by the Foxium video software provider.

In the heart of a city, in the moonlight, three rows of paintings enclosed in a steel drum frame pop up to a gambler. All the events performed on the monitor are accompanied by the music creating such an atmosphere so the gambler will feel as if being inside of the world of vampires. In order to become a part of the dark side of Vegas, the gambler has a green control panel.

It contains the main buttons such as the Bet arrows, the Letter A of the Autoplay, and the twisted arrow of the Start on the right, and the windows of the current state of gambling on the left.

The gambler will notice the masquerade of such elements as Blood bags, Crime scene, Surveillance footage, Ventrue, Giovanni, Nosferatu, Tremere, and Ravnos. Each of them has its own price, which is described in the Paytable.

Steel hatch “W” is a wild element in the vampire world, which can occupy the place of any other element, except for the special ones. The wild element will be presented in the base gambling and in the program of free rotations.

The Vampire and The Prey (a lady) are two special elements that occupy three cells in a row on the reels. If the vampire is displayed in a column, the gambler will receive a payout of twenty common bets. If the blonde is displayed in the column, she will provide 30X. Both these elements will push the gambler to the Blood & Discipline bonus program.

On both sides of the drum, the gambler can notice red and green meters. The red meter is blood, the green one is discipline. The gambler is provided with a random amount of one of them if the blonde lady and the vampire meet on the reels during a single rotation. When one of the meters is filled, the gambler will enter one of three programs of random free rotations. The amount of blood determines the quantity of free rotations from 5 to 15 times. The level of the discipline provides from 1X to 6X of a multiplier.

If the gambler notices three special elements, he or she can be invited to the multi-level Pick Me bonus program. It consists of six stages where the vampire will seduce the blonde. The gambler ought to choose one of five cards that contain payouts or skulls.

If there is the skull, the program is over. The further the gambler climbs, the larger the sum will be. First five stages provide real money and the sixth one provides a multiplier 50X.

Tour to the vampire world for free

The Vampire: The Masquerade – Las Vegas slot is so mysterious and complex that the gambler should get close to all the vampire elements and payment terms for each of the compositions. Its Demo mode is an excellent tool to play it for free, especially since there is no registration and no download required.

Other Games by Foxium