Under the Rainbow Slot Machine

You can not play this game for free
For free slots game go
Play free
or
(24 votes)
Game Played: 8
Full screen: close

Under the Rainbow Slot Game Images 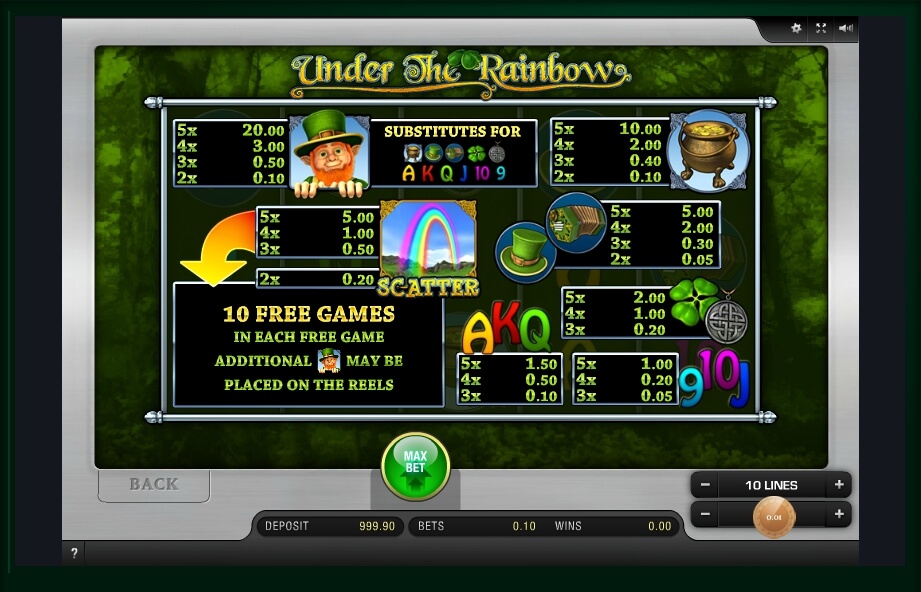 Under the Rainbow Slot Review

Have you ever been to Ireland? Oh, this is an amazing place that has an amazing culture and tradition. By the way, you have probably heard about the leprechauns that live in the myths of Ireland. However, the locals do not consider this fairy tale, as many residents claim that they saw real leprechauns and their treasures. Witnesses claim that these creatures live on the rainbow and catch them only after the rain. Having studied this theory, the Merkur developers propose to check this in the new video slot called Under the Rainbow. But be careful because these dwarfs are very cunning and have many traps.

Reading a variety of tales in humans formed a certain image of leprechauns. So, we know that these are dwarfs who are dressed in green clothes and wear clover that is also one of the main symbols of Ireland.

We also know that leprechauns are very kind, but if is it true? See, at night they make their way into the houses and steal gold jewelry and coins. But on the other hand, they do not attack people, on the contrary, they can share the treasures in this slot machine.

The interface of the video slot is made in bright colors. When the player starts the game, he/she will be in the magic forest. In the same style, 5 reels and 10 paylines are made. Here there are colorful symbols that completely convey the atmosphere of the game. In addition, during the game session, the user will enjoy stunning animations as well as 3D elements.

To start the game you need to choose the number of lines on which winning combinations will be formed. To do it, you need to use the Lines button that is at the bottom of the screen. Then the user has to bet on each line. To do it, click on the Bet button and select the value according to your budget. The game can take place in the manual and automatic modes.

They are activated by the corresponding buttons, but in the second case, the player needs to set the number of continuous spins. As we have already said, the leprechauns are very cunning, so that in order not to fall for their tricks, the participant needs to study the pay table and the rules of the slot machine. Besides, the structure of all the lines is described here.

During each spin, the jackpot (20,000) of the game is played. If a combination appears on the screen, the user will have access to additional risk games during which the payout can be increased. The first risk game is called “Card Gamble” and it offers to specify the color and suit of the playing card. If you do it correctly, your payment will be credited with the payment multiplied by 2 or 4 times.

The second extra round is called “Ladder Gamble”. Here the client needs to climb the stairs and collect the payments. However, in case of an error, the last payment will be canceled.