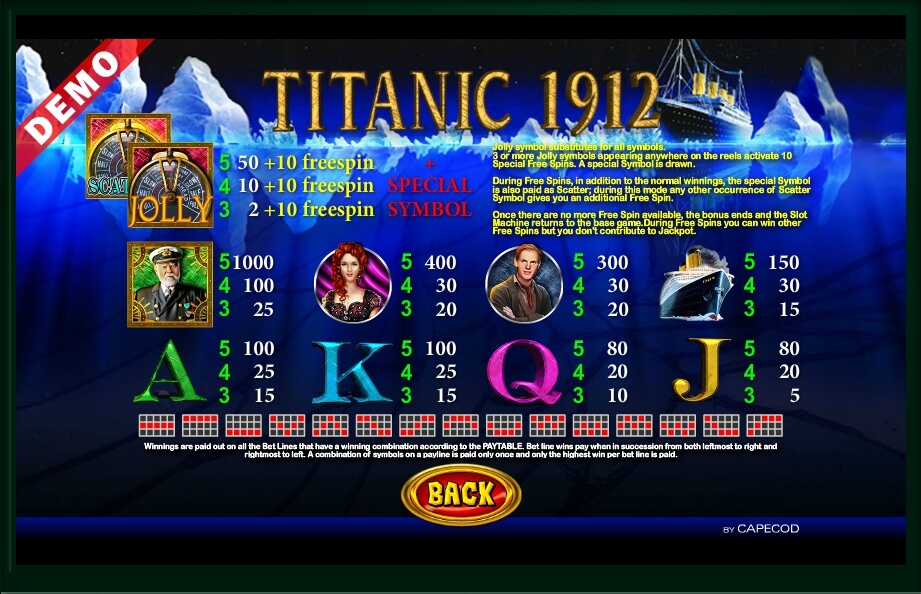 On April 14, the captain and his team got several important messages from other ships about floating ice that was encountered on the way. But despite this, the team completely ignored these warnings and at full speed led its liner to New York.

Closer to midnight, looking ahead they reported about the rapprochement with the iceberg, this message was given to the first assistant captain who was on duty. You probably have already guessed that it was a legendary Titanic, which could not achieve its destination. To this ship was dedicated to a lot of films that described the tragedy. The company Capecod Gaming also decided to present its vision of this story in the new video slot Titanic 1912.

The theme of this model is completely dedicated to the ship, which became the main sensation of the last century. Everyone wanted to buy a ticket to the Titanic and go to free America. That`s why all the action of the game unfolds against the background of the cold ocean. In addition, we can see there a lot of icebergs and a big ship. In the color scheme, the different shades of blue that are associated with the cold predominate.

Thanks to such graphic techniques, designers managed to convey the atmosphere of the ship’s death. However, Titanic 1912 is not a sad story. On the contrary, it’s a fun and lucrative adventure during which you will meet with famous movie characters. Let’s look on the structure of this gaming machine.

At the top is a logo that is made using the 3D technology. In the center is a “cold” playing field that has five reels. First, we suggest that you visit the theoretical section with a table of payments. In addition, there is a structure of 15 lines as well as the rules of the video slot. After that, the user must make a bet and select the number of active lines (from 1 to 15).

To do this, use the “bet line” and “lines” functions. Please note that the outcome of the game session depends on these indicators. To start winning real money, the customer needs to choose one of the starting rotations (manual or automatic). There are additional settings on the bottom. Here you can select the full-screen mode of the game and also mute the sound.

To make this model popular and in demand, manufacturers have added special elements. So, the wild can replace an element and complete your combination. This will help players to get real money. Also, in the game there is another special image. After it appears on the playing field the participant will move to the depths of the ocean where he will determine the number of free spins.

It is worth noting that this is a great way to increase balance and get positive emotions! All the rules as well as pictures are described in detail in the payout table. On the screen will appear Kate and Leo, who are the main characters of the eponymous film.