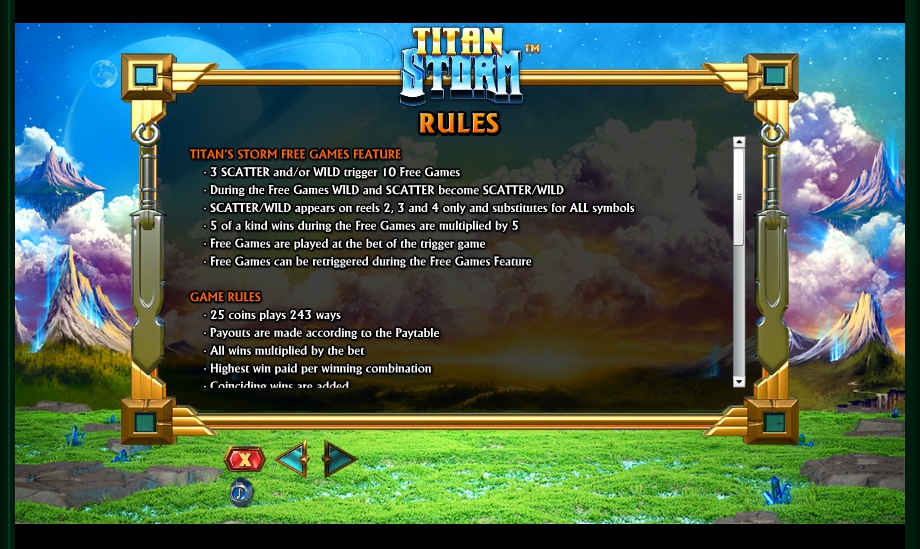 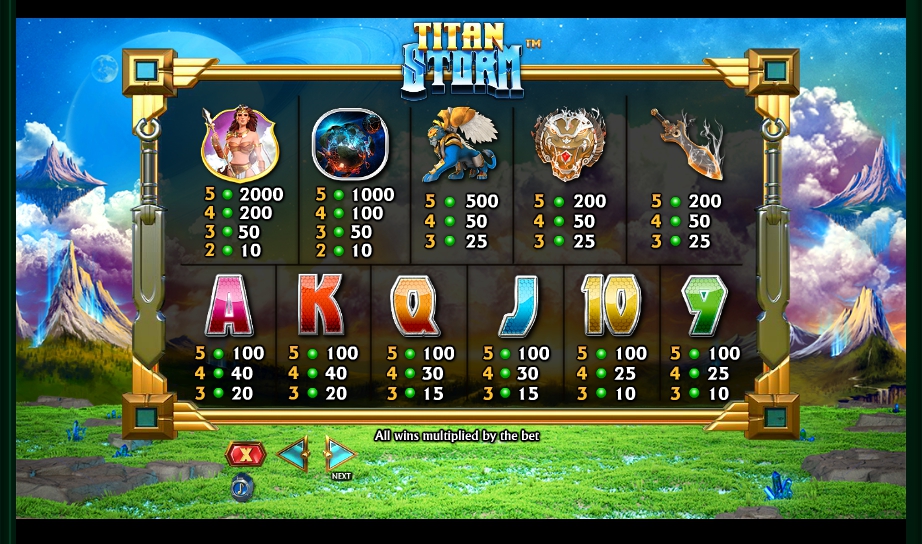 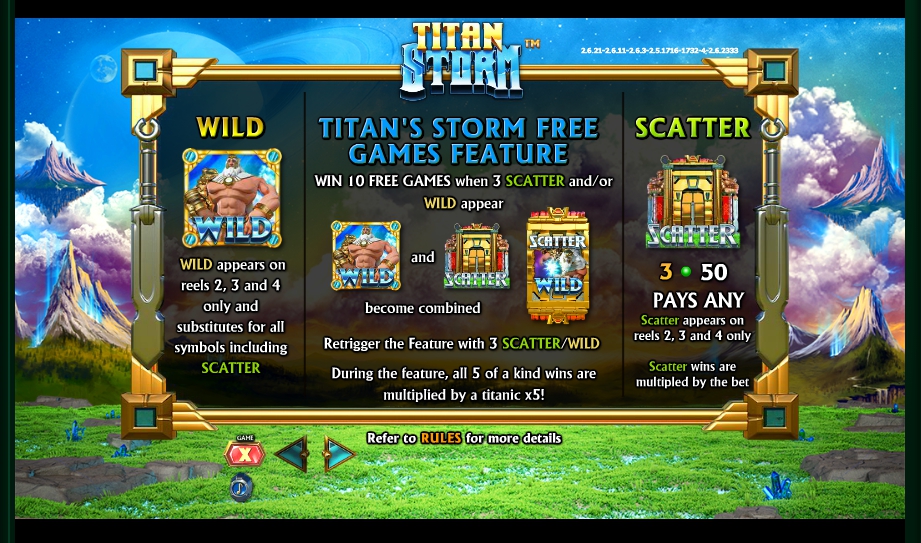 In the mythology of ancient Greeks called titans gods of other generation who were born as the goddess of the earth Gays and god of the sky Uranium. These brothers and sisters, having entered marriages between themselves, have generated Prometheus, Muses and other more recognizable characters of age-old legends. In recent years this subject gains popularity again.

Directors shoot about them movies, and creators of computer games devote to them their own latest creations. Also the hazardous industry doesn’t lag behind. So, the Titan Storm Slot machine which was released by the NextGen Gaming company became the next novelty in the market of game software.

Design of the Titan Storm Slot machine is very beautiful and pleasant to an eye. Mountains, the blue sky and green fields against the background of directly located on a positive, and music only add charm. On reels you will see subject characters, and at the bottom of the screen a control bar with the main buttons. Everything is issued is harmonic and it is convenient.

The game Titan Storm represents five-reel video slot. Characteristic is the lack of functional lines of payments per se. The paid combinations in it are also created from identical symbols, but they shouldn’t go accurately on the line. There is enough that pictures have dropped out on the next reels, starting with left, in any of three cells.

The sum of a prize is calculated for size to a rate and coefficient on a concrete symbol (to x2000 the credits). In total in a game there are 243 options to create an advantageous combination. You will be able to play the slot online, having relied on, multiple 25. It varies in the range from 20 cents up to 5 euros. In Titan Storm Slot there are special and usual symbols, free spins, a round on doubling and other not less interesting functions.

Having started Titan Storm Slot, you will see on its reels fantastic characters, their tools and face values of playing cards from the nine to an ace. At the same time each of symbols owns the cost with which you can get acquainted in details in the table of payments.

In the automatic machine there are also two special signs: Wild (gray-bearded giant) and Scatter (lock). They can brag of additional opportunities which make a game much more interesting and more favorable. Wild can appear only on three middle reels. Therefore, it isn’t capable to form full-fledged combinations in any way.

But it is possible to put sets of other pictures with its help: Wild has an opportunity to substitute other images, except scatter. One more special sign – Scatter. It also arises only on the second, third and fourth reels. As soon as three of those symbols drop out on the screen, the player receives payment in the volume of fifty credits.

The main bonus of the slot is a series of free spins which consists of ten rotations under certain conditions. You get all of them free of charge, and the level of a bet remains at the same level, as in flowing to a spin. All prizes are paid with coefficient, and you will be able to prolong a round for ten rotations.

But before that it is necessary to reach it at first. Wild and Scatter are read by interchangeable elements for start of a round of free rotations. As soon as three of these figures fall out on any line item, before you the road from 10 prize-winning free rotations opens.

Among other things in the automatic machine there is an option about risk game where from you it will be required to call correctly the color of a card or the type. In the first case the multiplier x2, and in the second – x4 is applied. In total five attempts are provided for one stop.