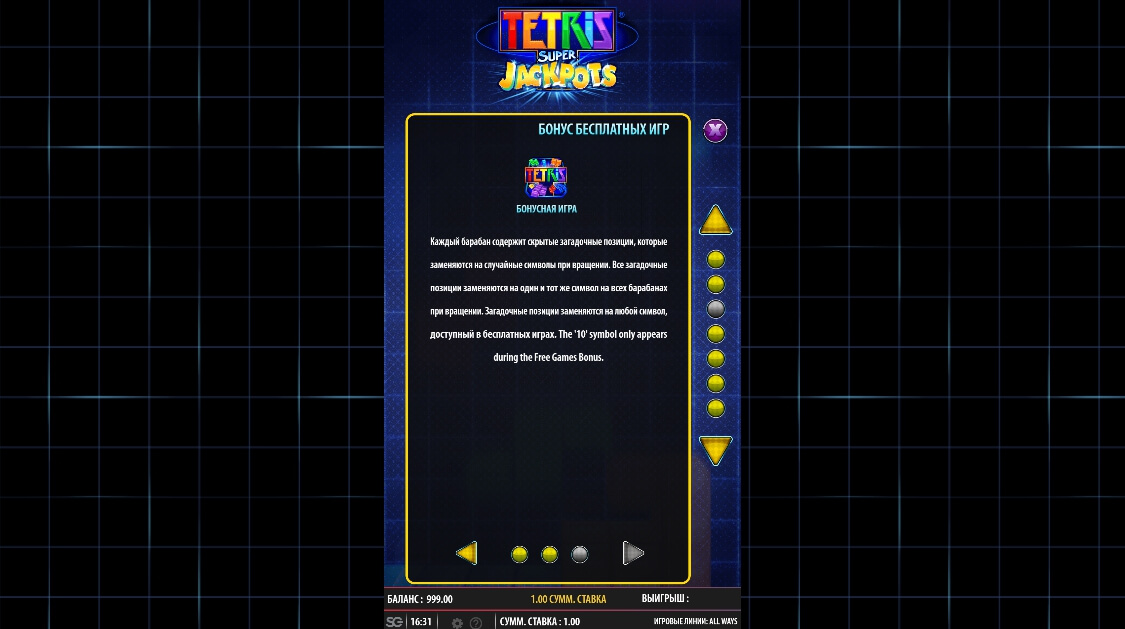 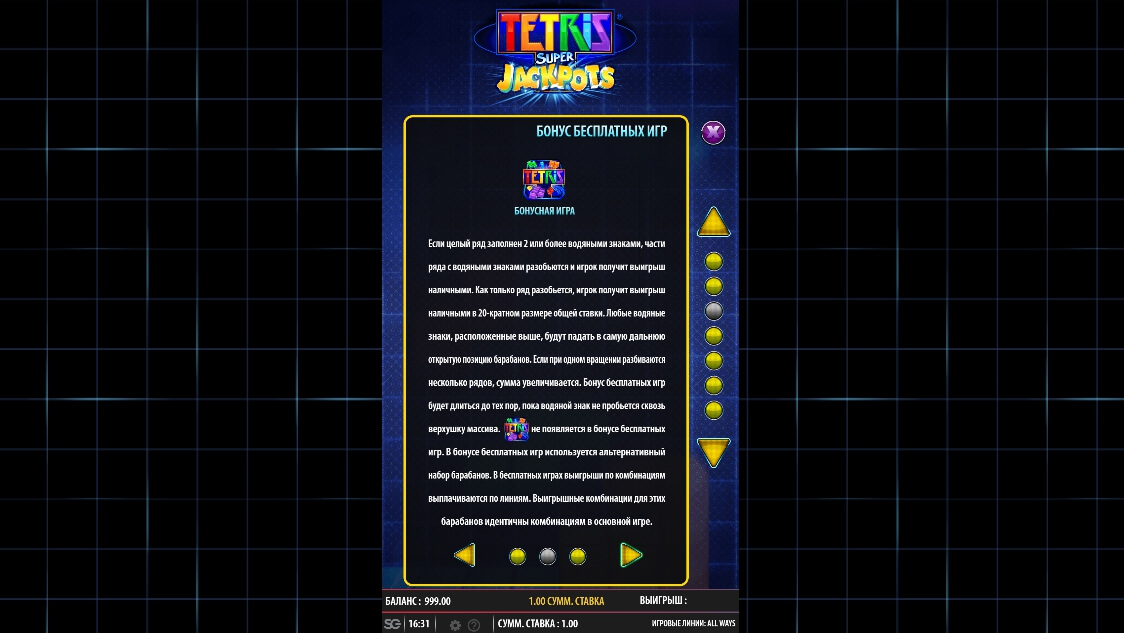 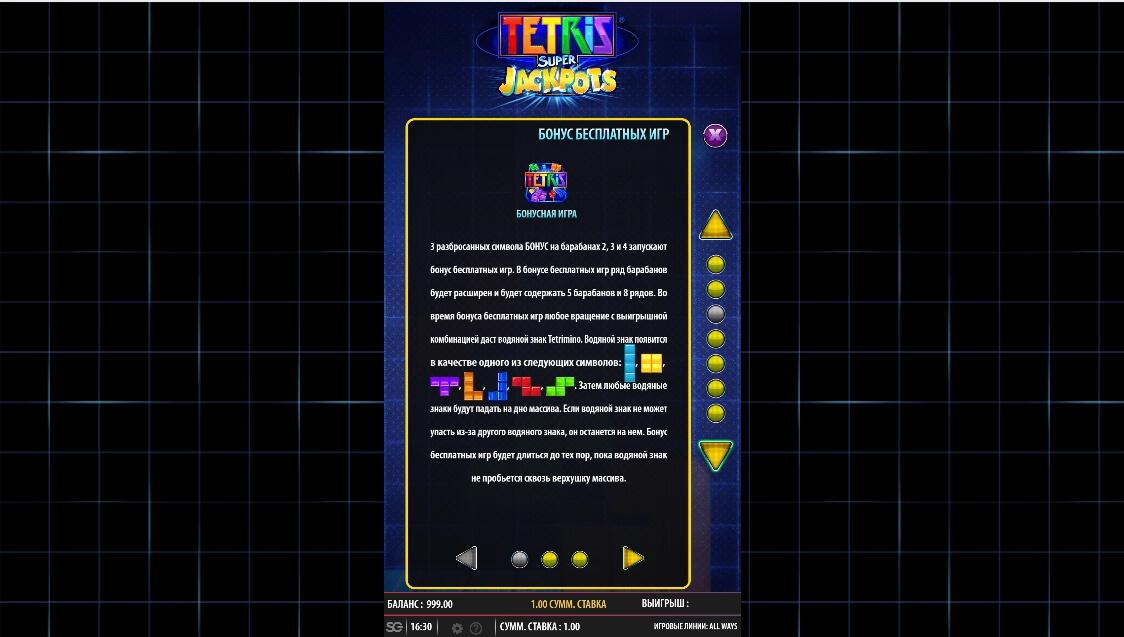 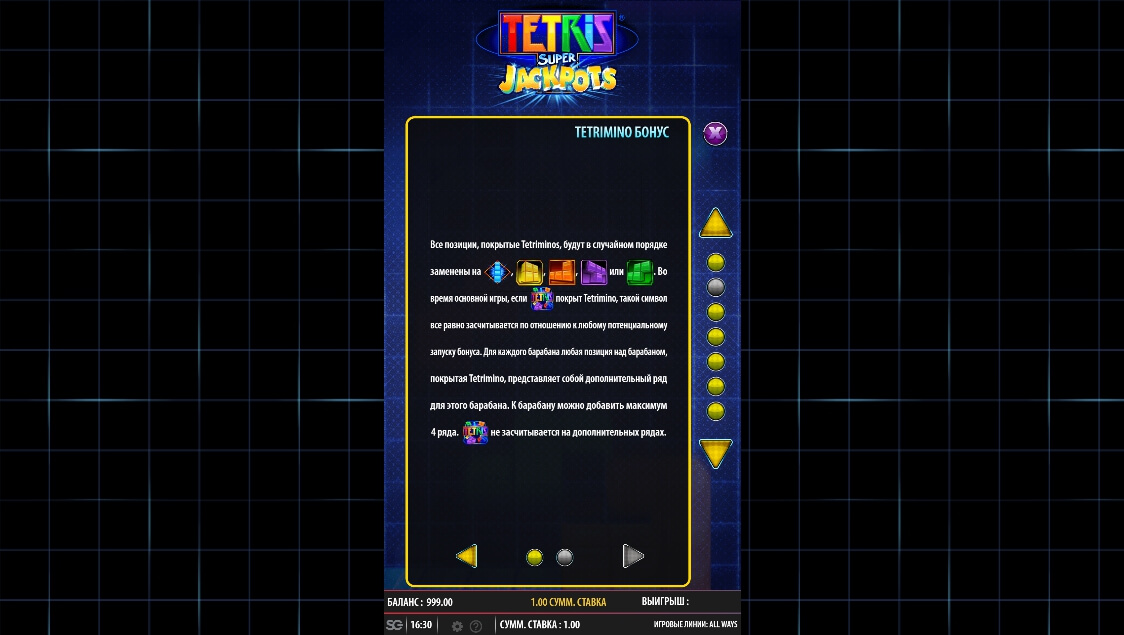 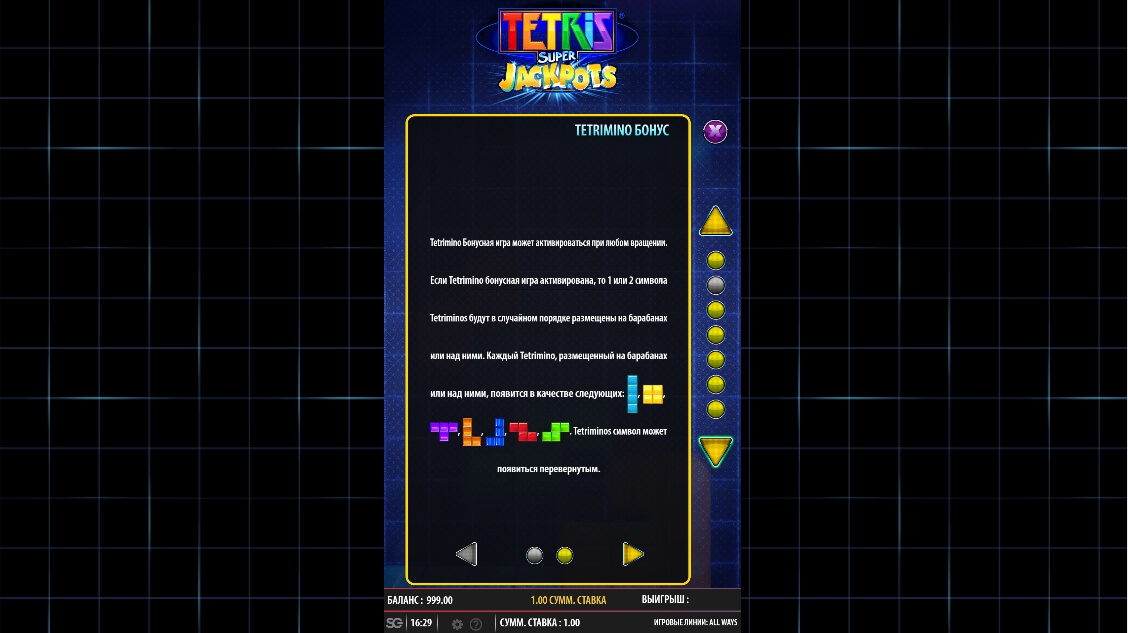 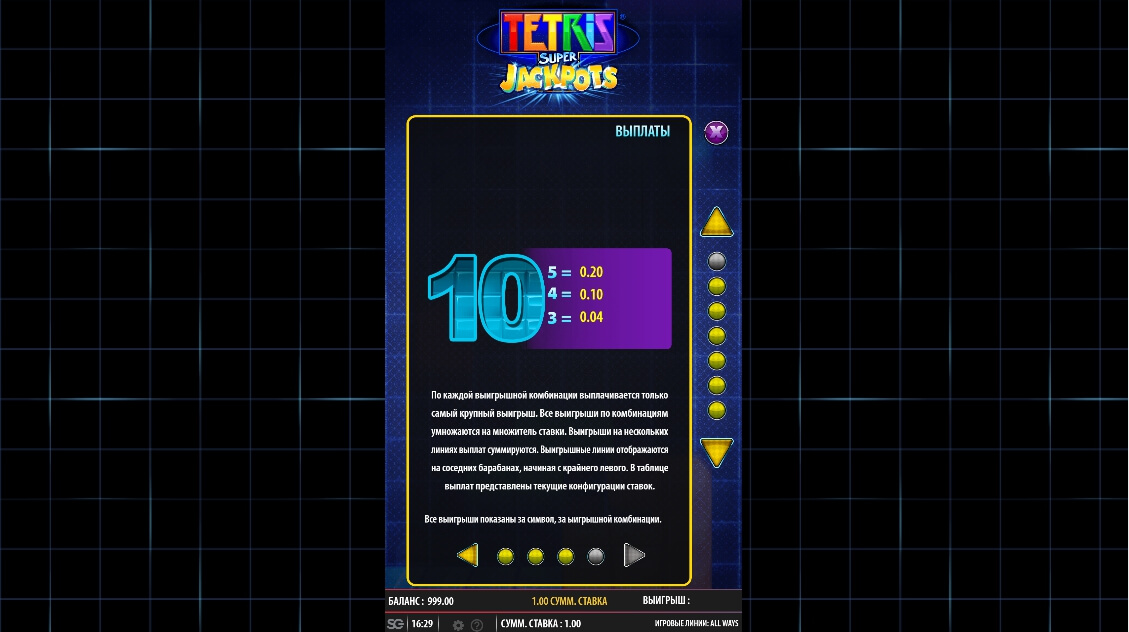 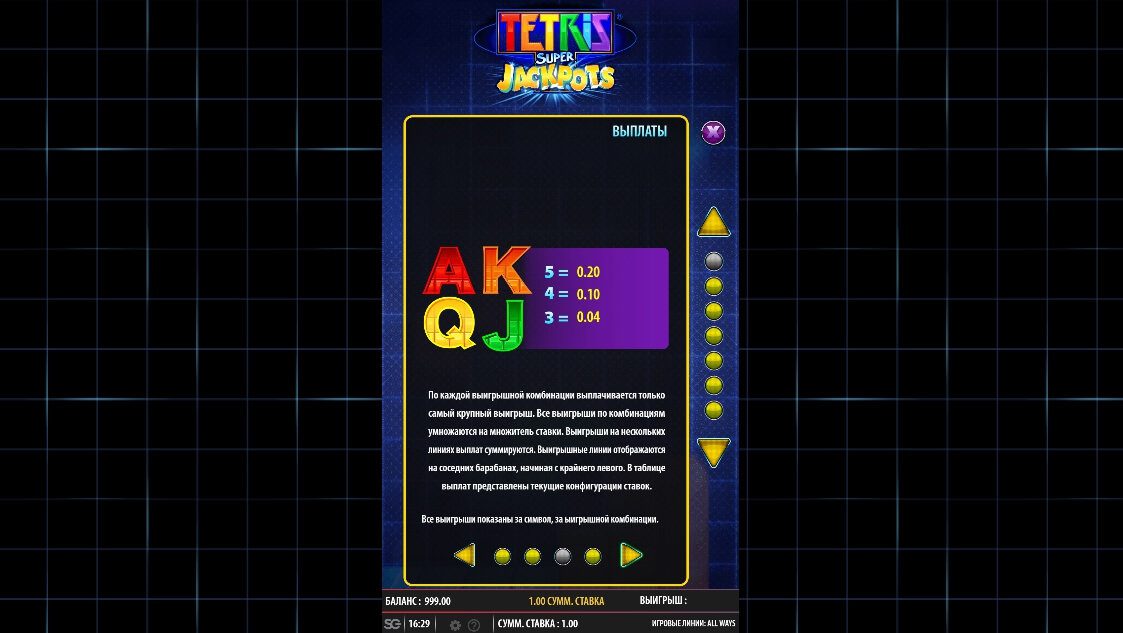 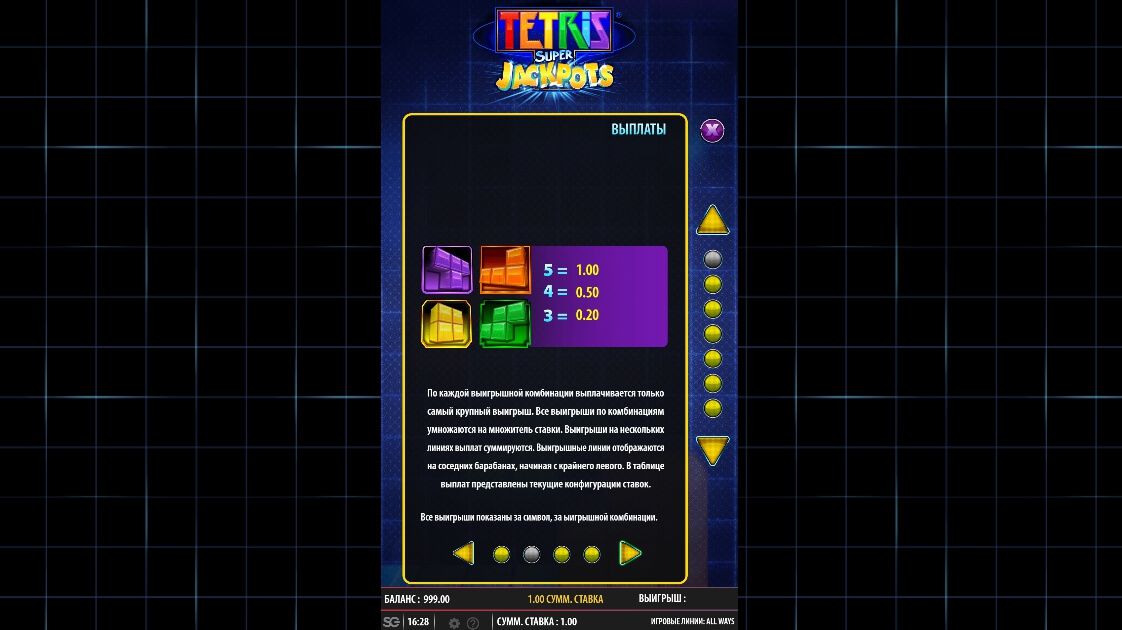 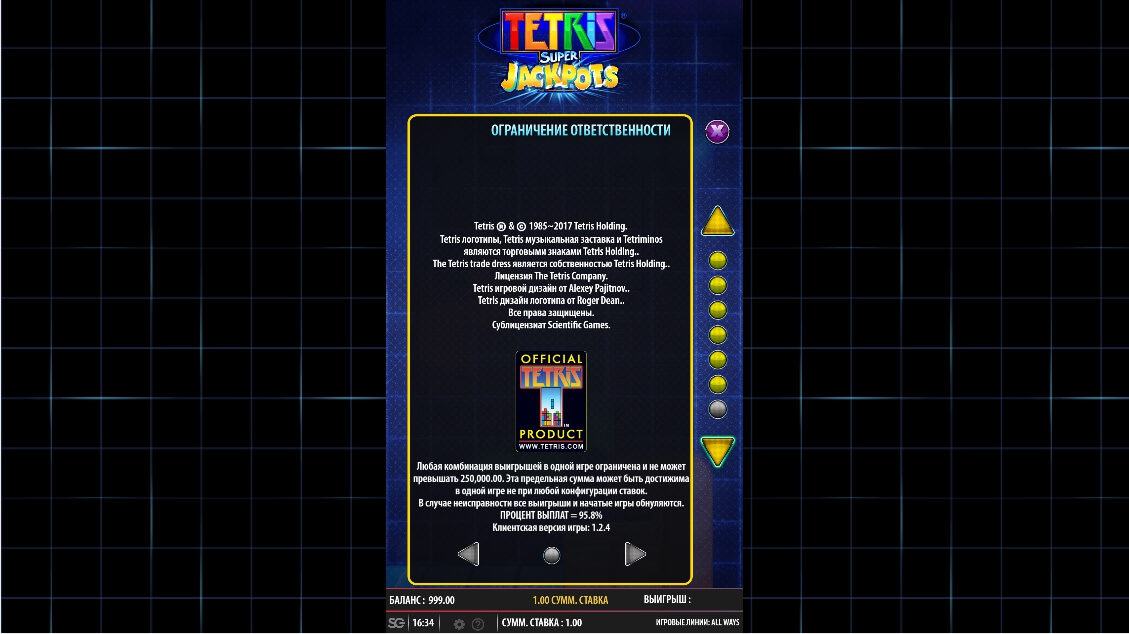 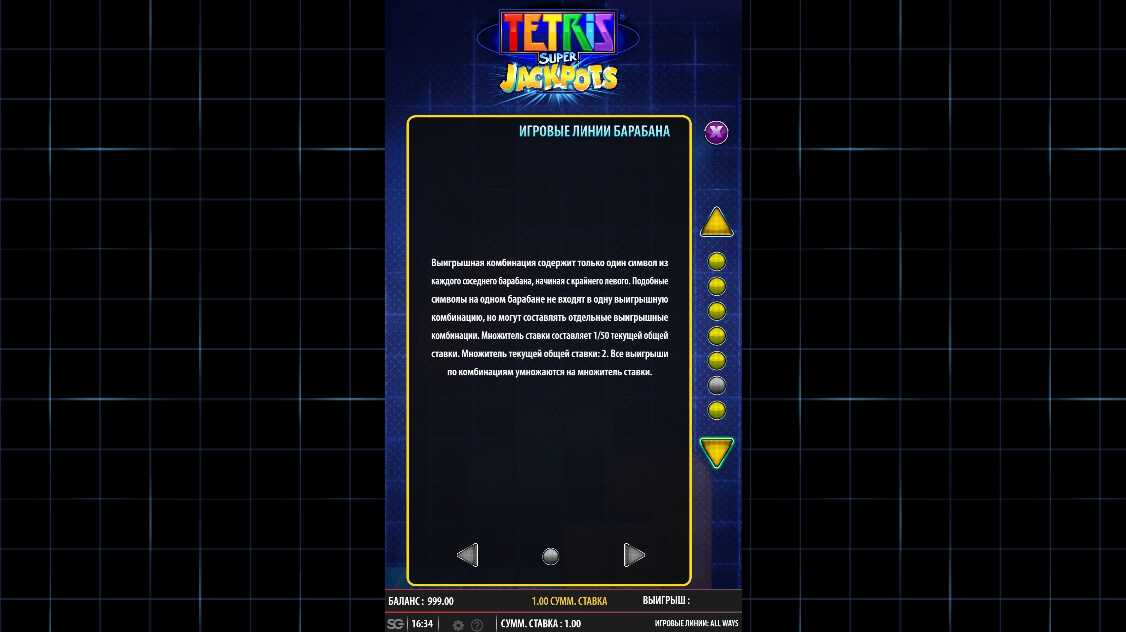 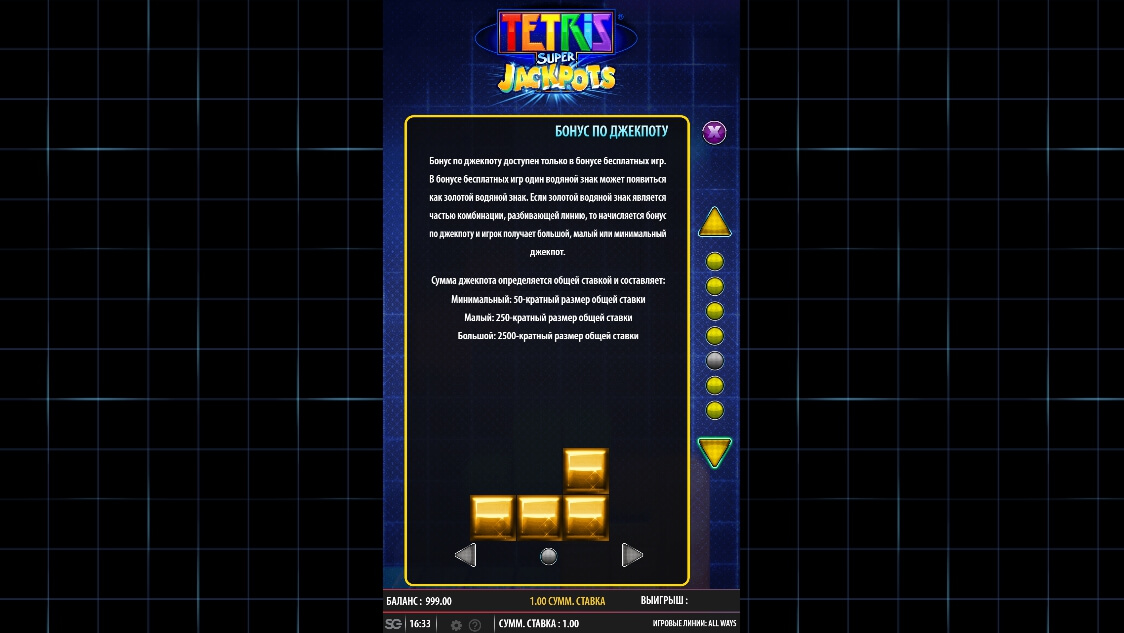 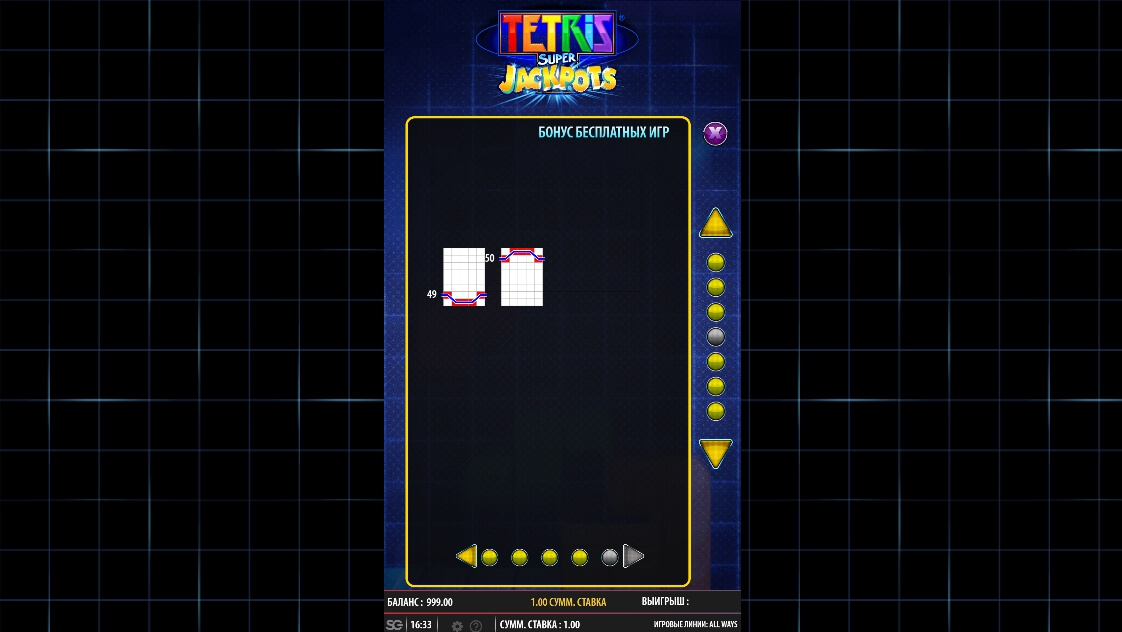 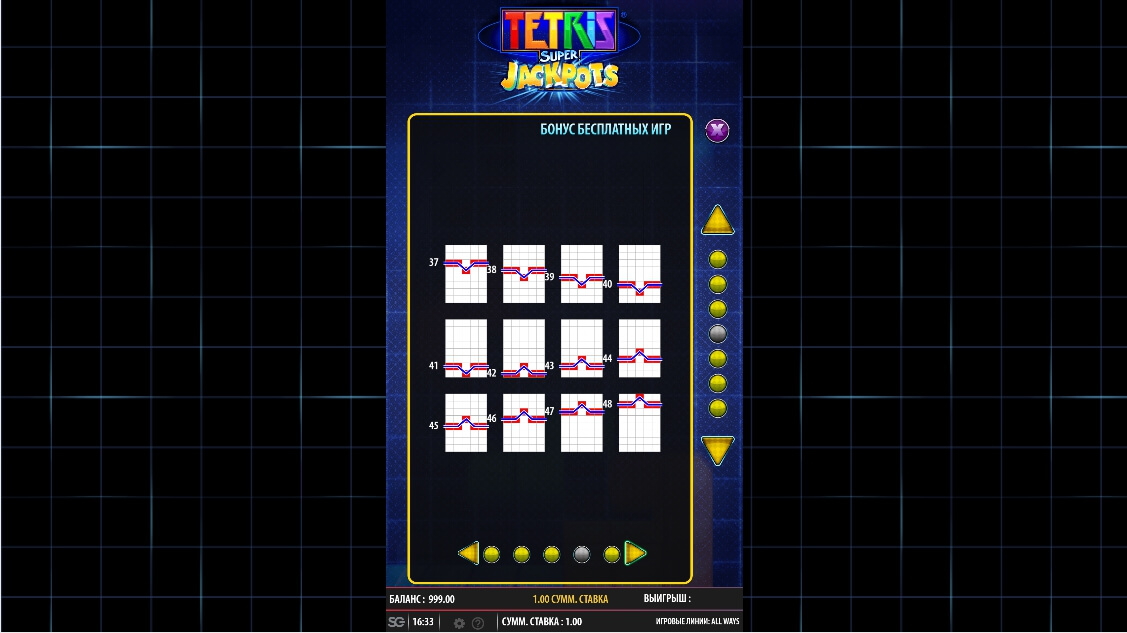 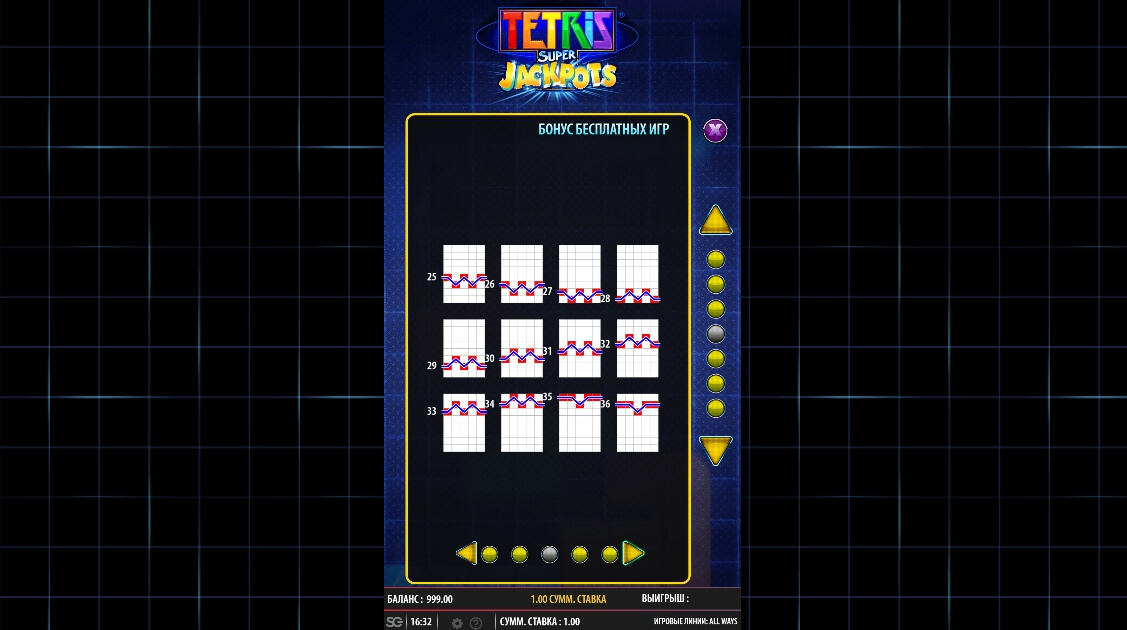 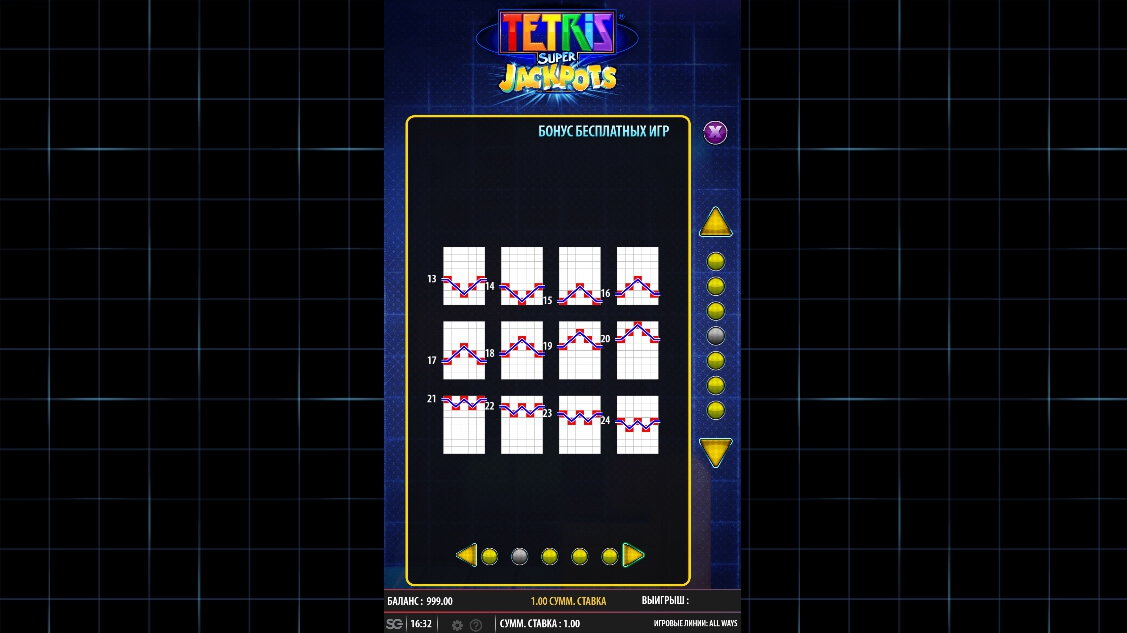 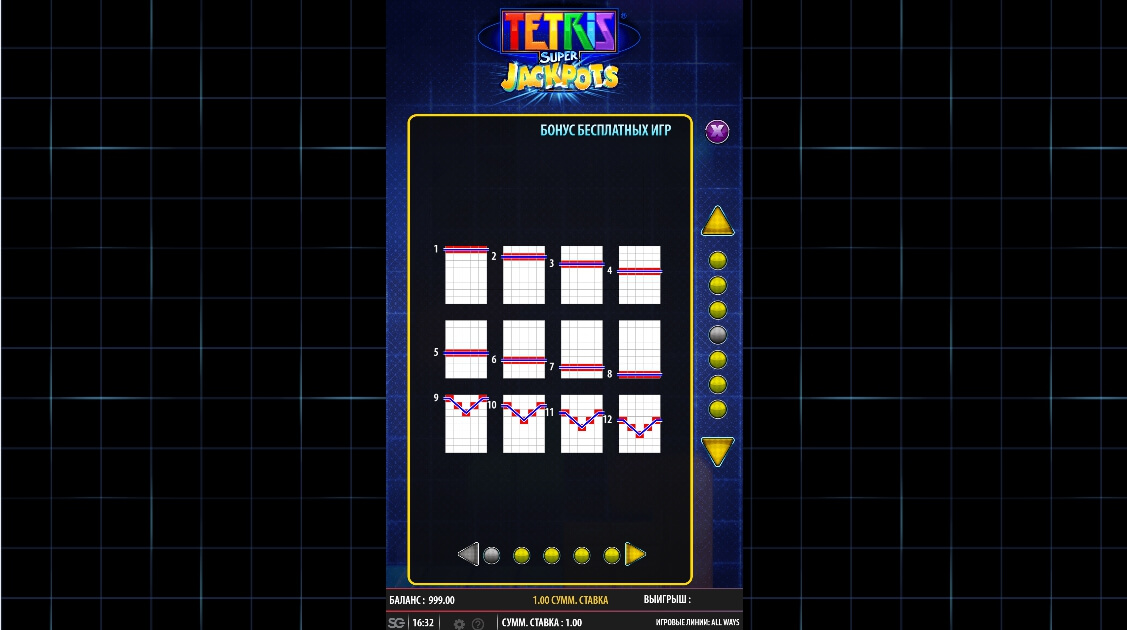 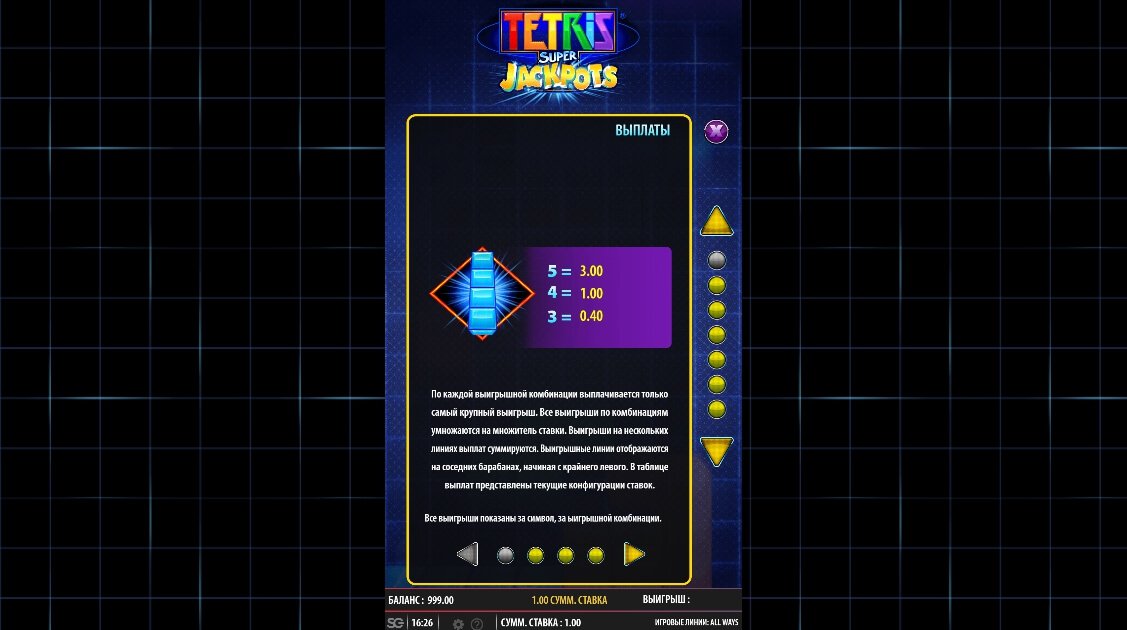 More than 30 years ago in the territory of the Soviet Union there was an amazing game called “Tetris”. The prototype of the game is the pentagram “pentamino”. There all elements were made of five cells, and from them it was necessary to spread out the given figures. Today there are many different versions of “Tetris”, in addition, the game is implemented on almost all modern computers. Not so long ago, the Bally Corporation has created and released a fascinating slot called “Tetris Super Jackpots”. Here, the famous elements were presented in a new style. If you remember the best game of the 90’s then you made a right choice!

This slot machine was built on the classical principle of multi-line models. So here 5 drums are applied. There are no standard lines, but 243 ways of composing combinations are available instead. This structure significantly increases chances of users to win. Each element of the interface was created using three-dimensional graphics. This method makes the classical game more modern and interesting.

Above there is a logo that is surrounded by falling elements. Probably every our guest knows the principle of Tetris. You need to make chains of items and get points, right? Since it is the modern video slot, the developers have used stunning animations and many bright colors. On the monitor will appear only thematic pictures that reveal the meaning of the classic game.

In order not to have problems, you should study the functionality of the keys that are on the control panel at the bottom of the screen. As we have already said, there are no standard lines here, so the player only needs to make a bet. This action is performed with the Total Bet button and the additional “+” and “-” controls.

Thanks to a wide range of rates, this slot is suitable for every player. Experienced players are recommended playing at high rates. Spins can only be carried out in the manual mode. During this round, the user can control his/her performance and change the bet.

On the left side there is a button that opens access to the theoretical section. Here the participant will find the paytable, the coefficients and the structure of the pay lines. The “?” button opens a reference section with rules and instructions.

Among the bonus offers slots we can select a round of free spins which is activated by the corresponding pictures. By the way, it is a great way to enjoy the gameplay and also to win real money (up to 30,000 credits).

Due to additional factors the player can receive payouts. The “freeplay” inscription indicates the demo mode that can be activated at any time. It will allow users to familiarize themselves with the principles of the functioning of the video slot. The game is played on virtual loans.