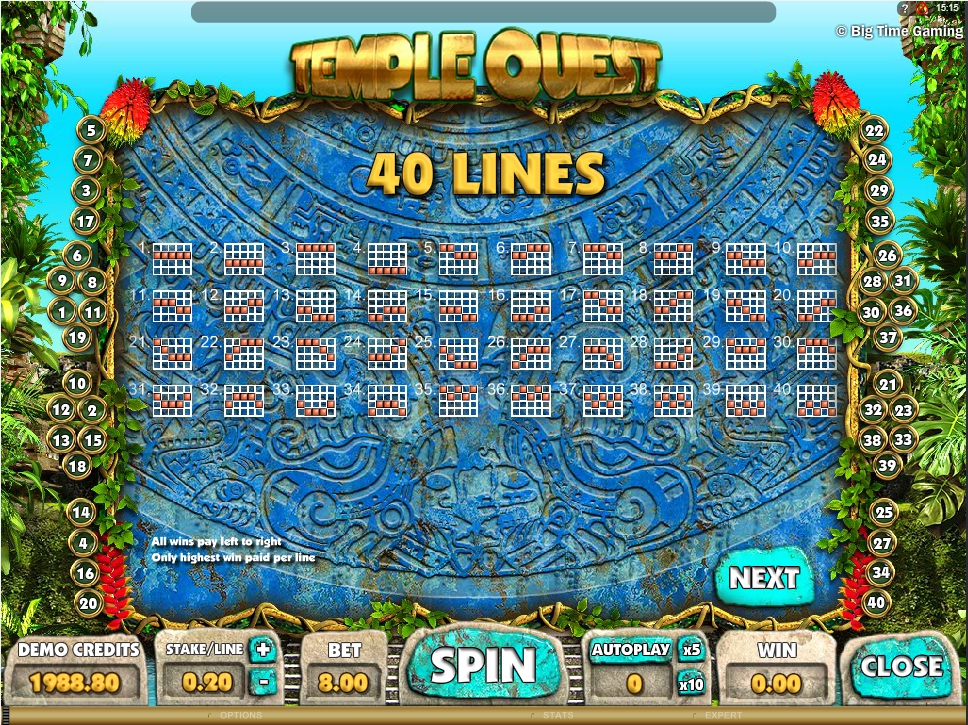 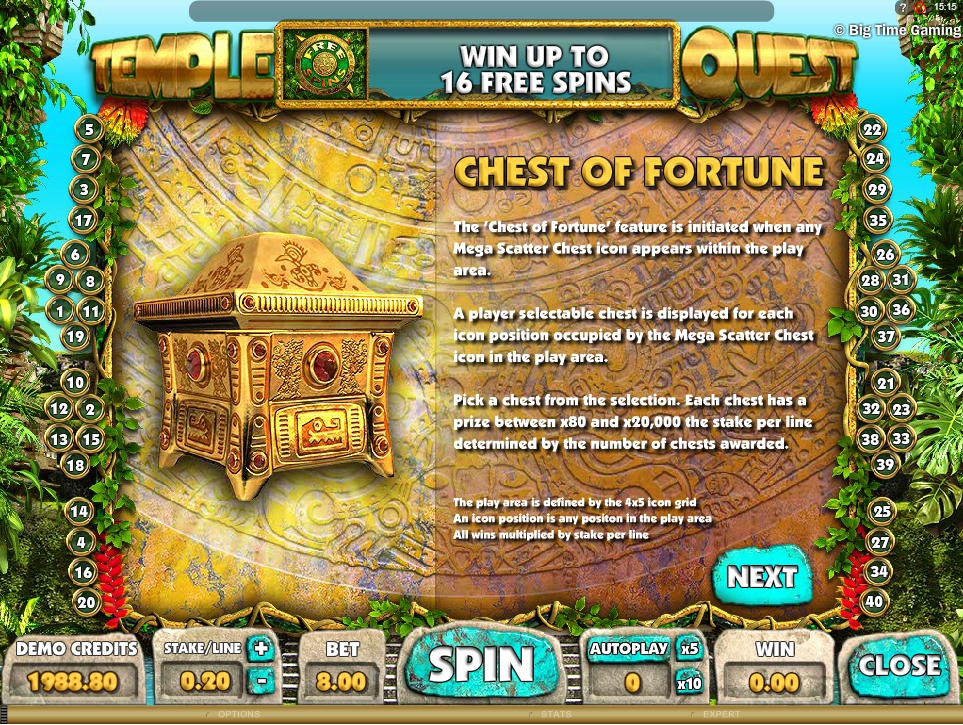 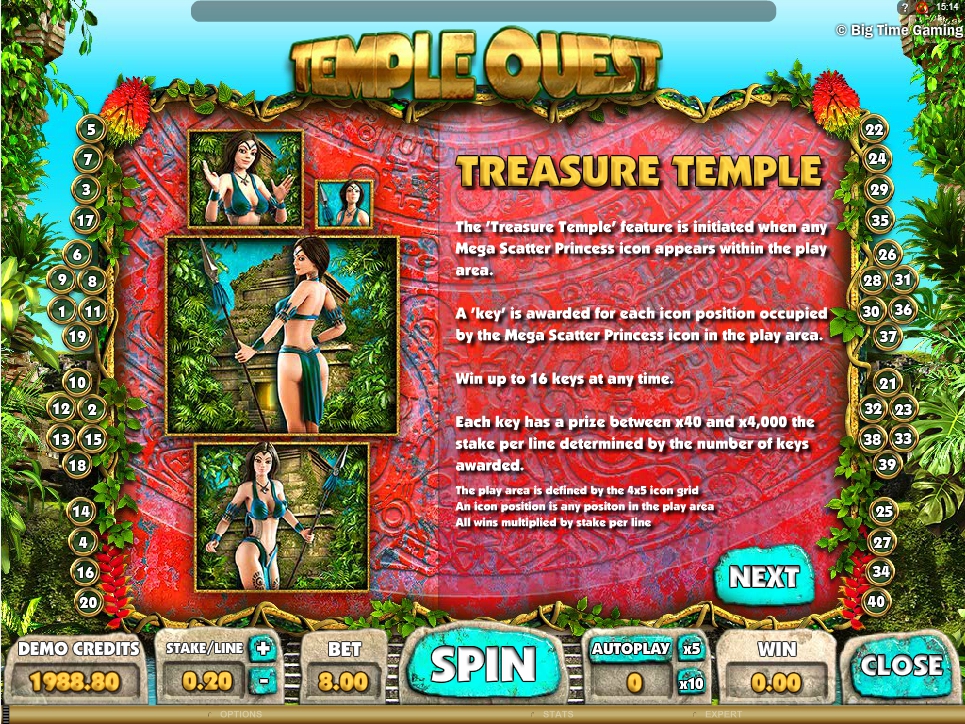 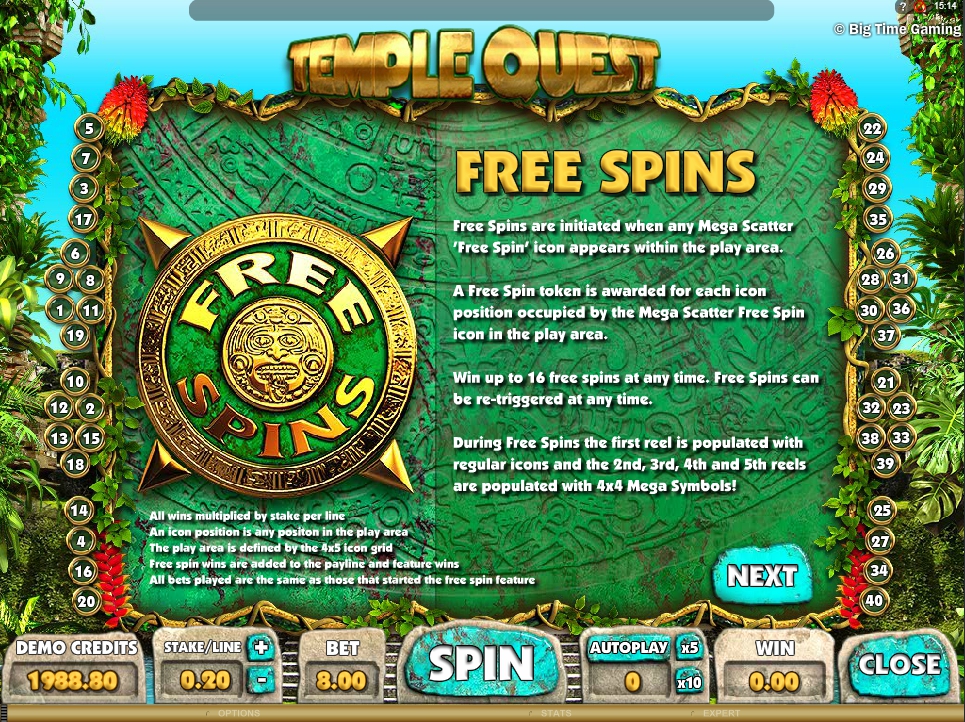 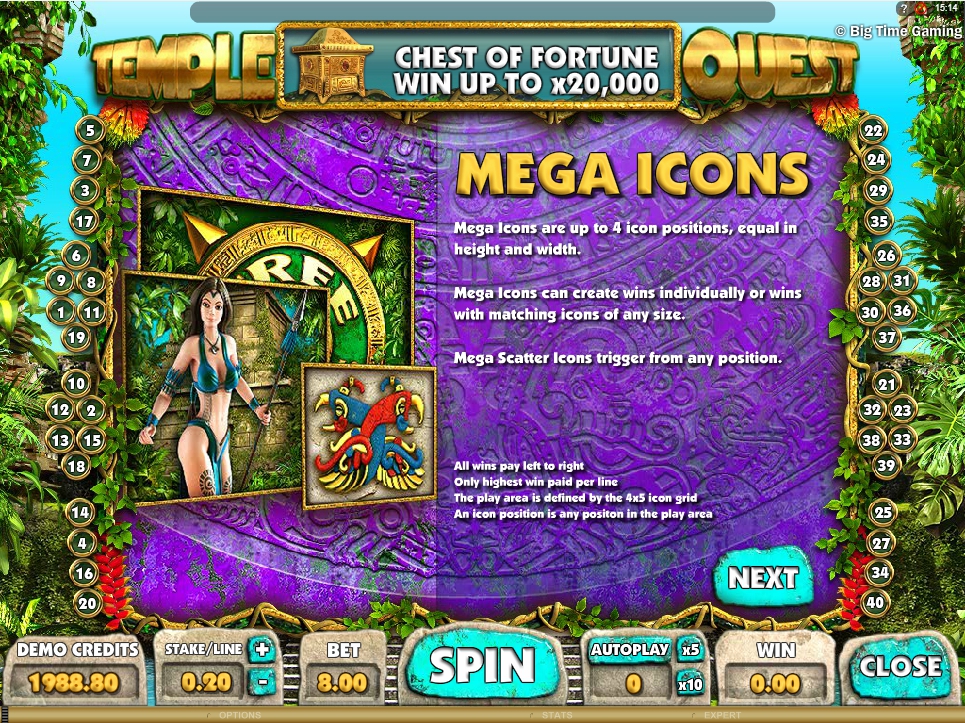 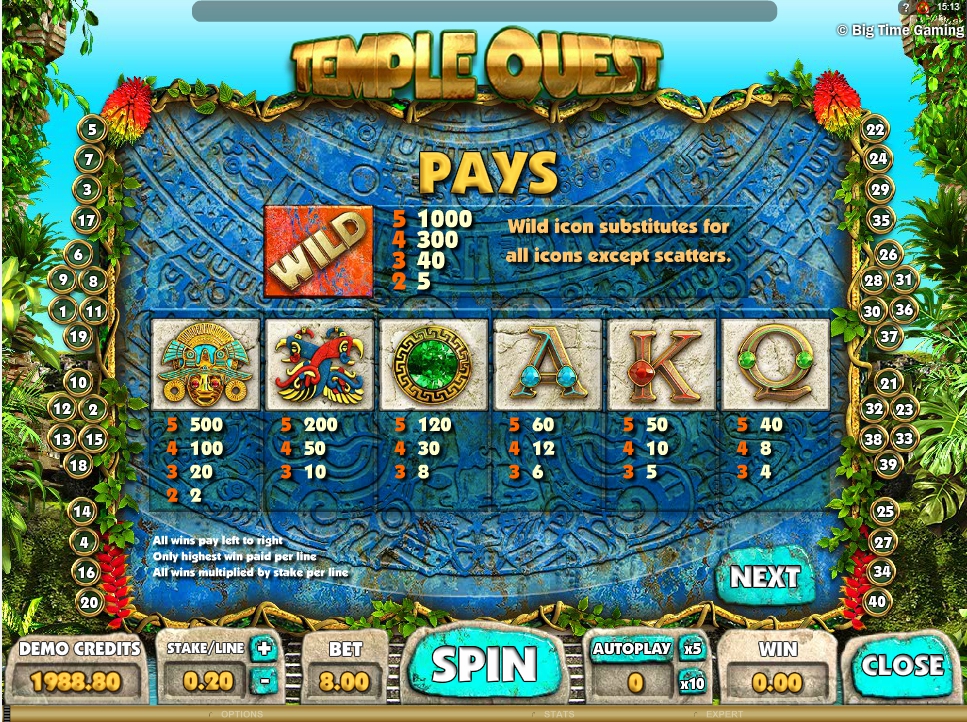 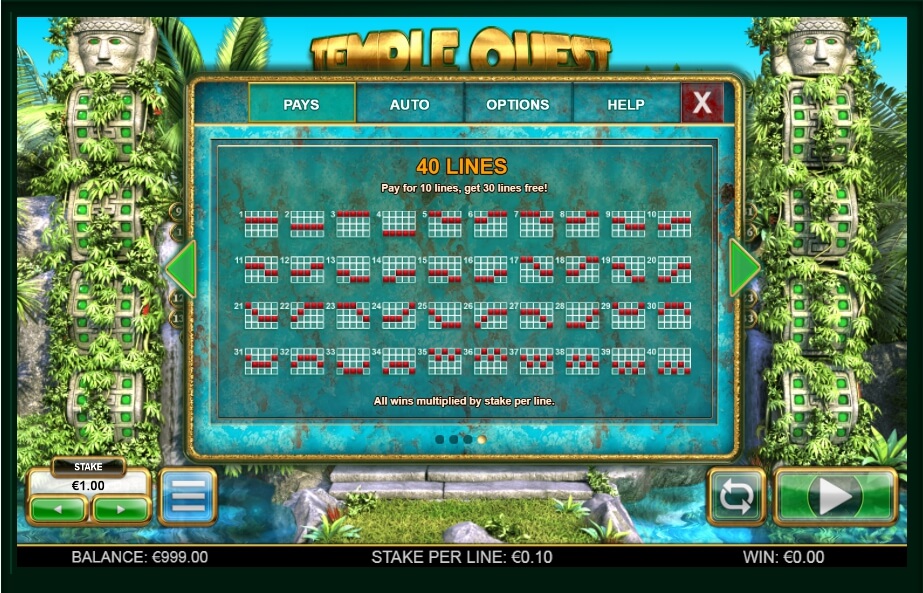 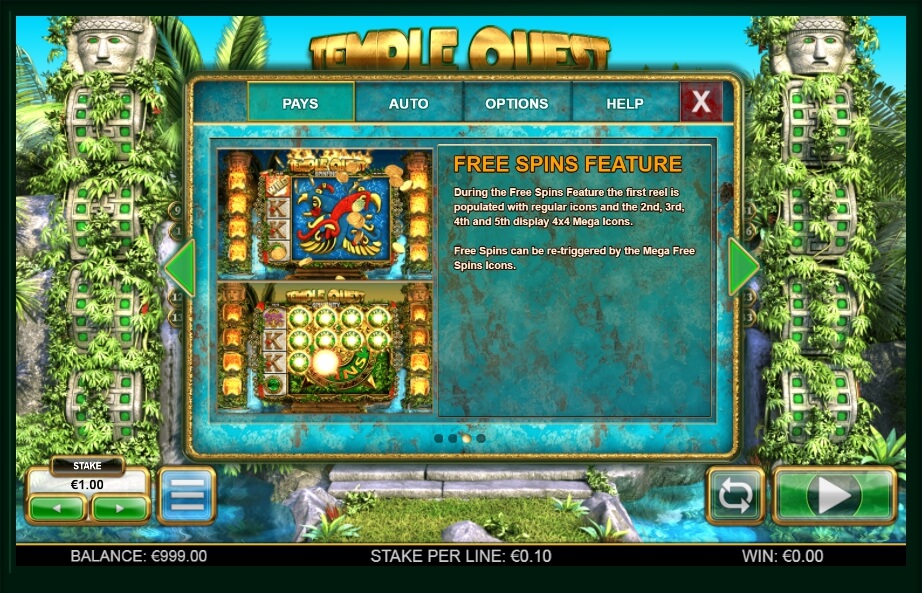 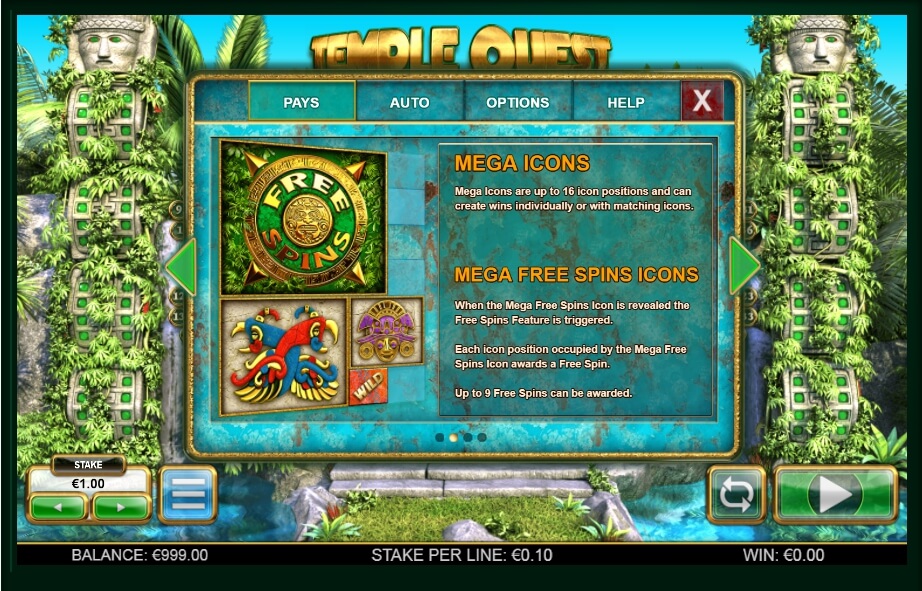 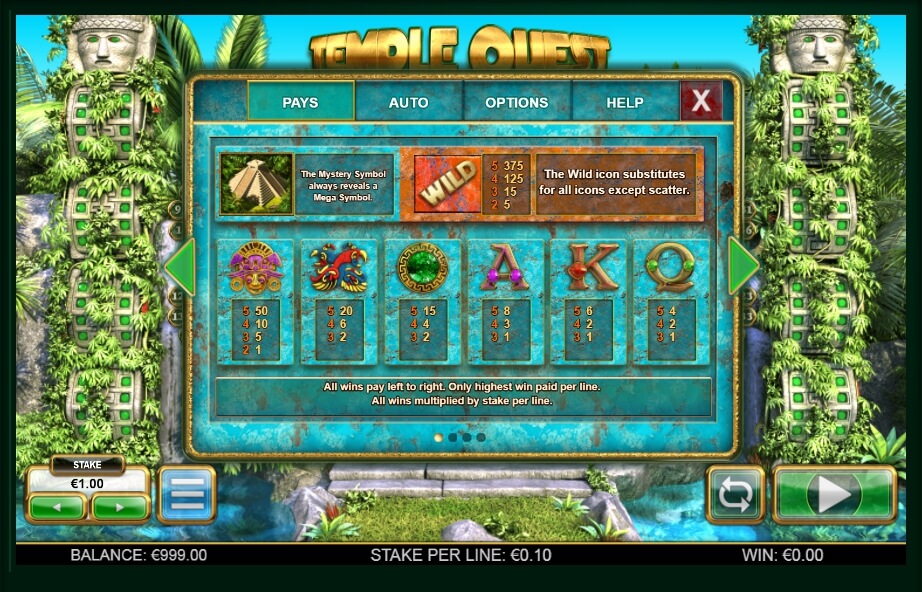 Thematic models of ancient civilizations are in great demand in the gambling world. Four years ago, the provider Big Time Gaming released a product that tells of one of the ancient civilizations. In a short period of time, the emulator managed to attract a record number of users. Therefore, the developer decided to create a continuation of this amazing story. Today we will look at the features of Temple Quest Spinfinity, which is a brighter and more profitable version.

Customers need to try to find gold of the ancient Aztecs, which until now has not been found by archaeologists. According to the legends, the civilization before the disappearance hid all the treasures in one of the pyramids in the jungle. A dangerous journey awaits you!

By the thematically designed interface of the slot you can accurately determine the name of the game, as colors and symbols are matched in accordance with the main story. Since all actions are unfolding in the jungle, the design of the gaming machine is dominated by a green color. The playing field is decorated with columns that were sacred to ancient civilizations.

Under the golden logo is the playing field with 5 reels and 40 lines. By the way, the last indicator is activated by default. The site was made in the form of an ancient plate on which the Aztecs left a mysterious message. The laconic control panel is made in accordance with the general style of the video slot.

The various buttons’ functions are defined by the slot device. If the player visits the information section, then he will study information about the characteristics of the gaming machine. The TOTAL STAKE button and auxiliary keys will help the user to bet on the round. Almost all emulators of Big Time Gaming have automatic mode and Temple Quest Spinfinity is no exception.

You can activate it at any time and take a break. If you would like to control the gameplay, use single rotations. This amazing journey is complemented by quality sound effects. Designers have spent a lot of time and effort creating this stunning model.

The same elements form combinations that will give the player a payout according to the table.

Consider the features of special icons:
Mega Icons. These are large varieties of pictures that occupy several cells on neighboring drums.

Mystery Symbol will also appear as chains. These images are replaced by the same pictures of a different type. The Wild forms combinations according to common rules and replaces standard images in combinations. The Joker is one of the most valuable elements of the game.

Mega Free Spins launches a round during which you can win real money. The number of free spins depends on the number of parts of the symbol “Mega Free Spins”. The rate does not change. In addition, this round can be restarted.