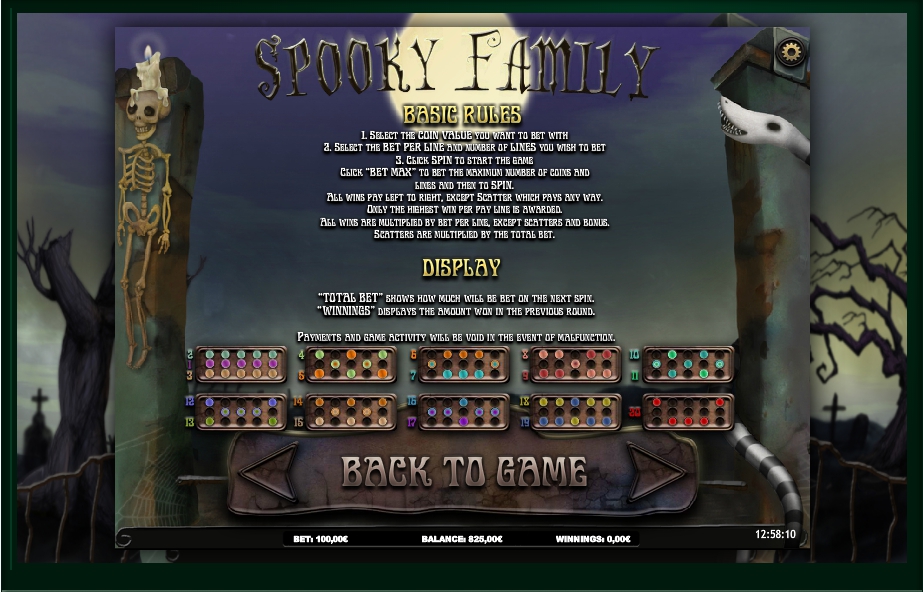 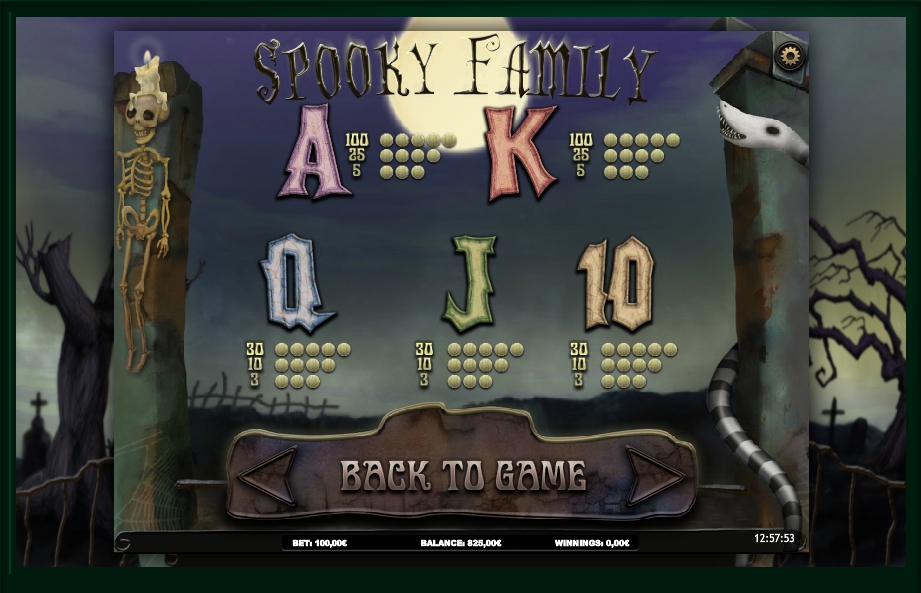 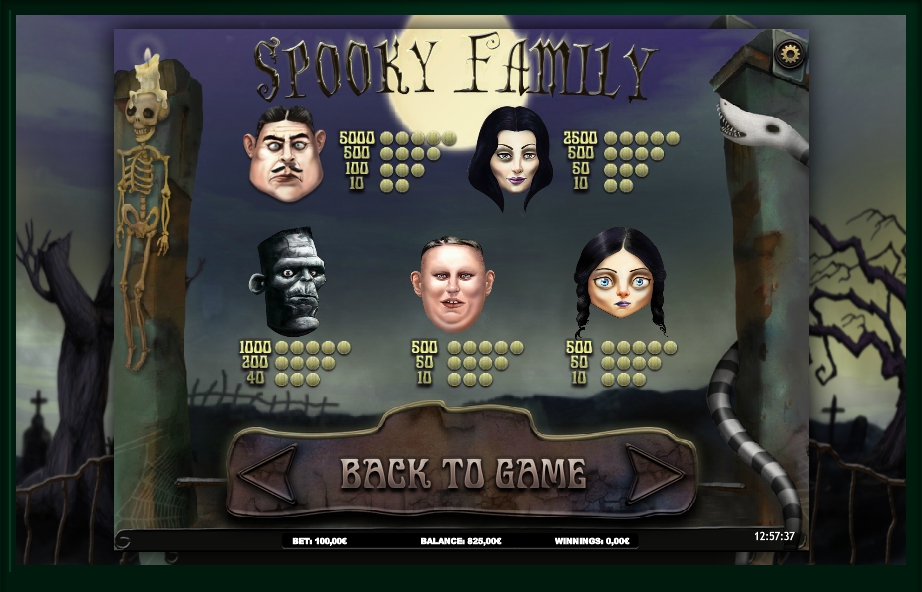 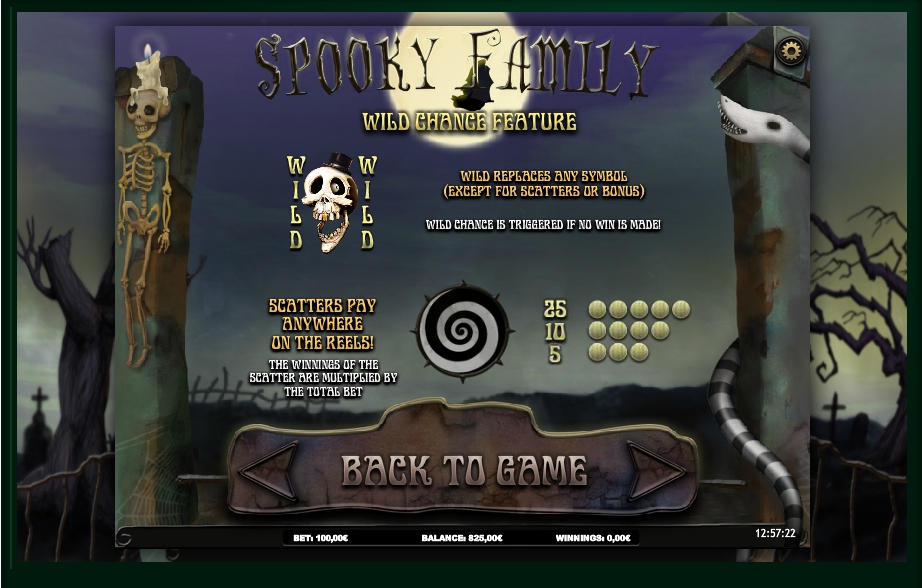 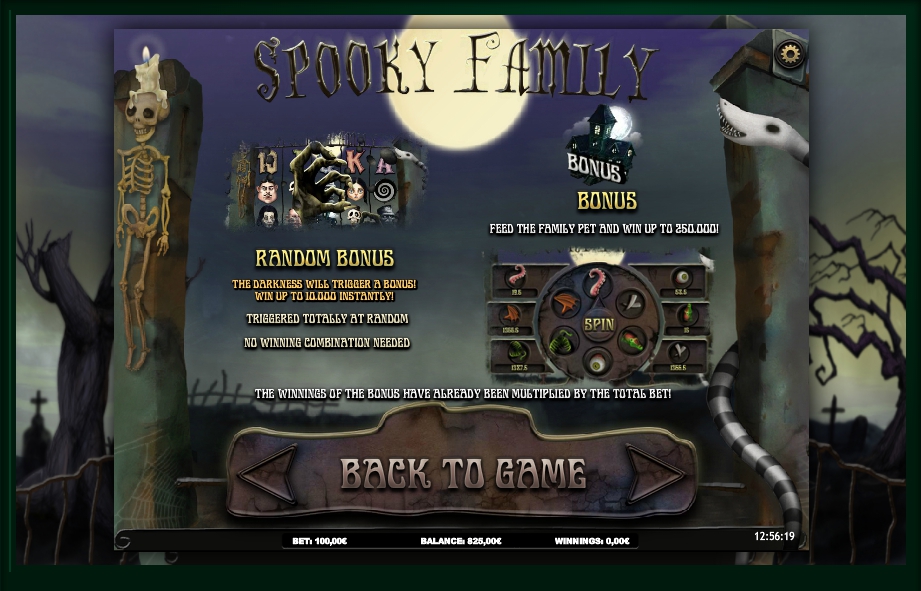 Get ready, you will have a real horror story in the virtual slot. From the very first moments of playing, each user is immersed in a fascinating atmosphere, getting acquainted with the Frankenstein family. Also, on the way to winnings, heroes resembling members of the Adams family will meet the player. Well, the adventure promises to be exciting. What treasures are hidden in the cellars of the old house? The Spooky Family online game by iSoftBet will tell us this.

Thanks to a well thought-out and stylistically consistent design, the player instantly immerses in a mysterious sinister atmosphere. So the background image in the game is the landscape of a cemetery with graves, trees and a curve, covered with moonlight. The game control buttons are stylized beneath the gravestones, between which you can see ominously luminous eyes, and the drums themselves are located on a high dark fence. A huge striped snake crawls along the edges of them and a skeleton hangs.

The game process reveals the given theme even more: all actions are accompanied by sharp frightening sounds, and when the combinations are formed, the game symbols begin to blur, as if in a hypnotic mirage. The user will not only have to try to get a prize, but also to understand what secrets this sinister family keeps.

First, the user is offered to set initial parameters. There are a maximum of 20 game lines, the exact number of which can be optionally set with the help of the Lines button. The Bet Max option is designed to immediately bet on a maximum. The Spin and Auto spin buttons are responsible for the standard and the automatic spin mode, respectively.

It is worth remembering that when the automatic rotation is activated, the doubling option becomes unavailable. If the user plays in the normal mode, in the case of adding any winning combination, he/she can risk and double his/her own winnings in half or even more.

The prize-winning unbeaten round is activated if there are 3 Family House pictures. Here the player is invited to feed local pets, but only the final outcome of the tour will determine what kind of delicacy they will have more to their liking. More precisely, the player will have to start rotating a round stone slab, which will then stop at one of the positions.

Here there is another opportunity to get an extra win – a random bonus. It is activated randomly after the completion of any rotation, regardless of whether any combination has been formed. At the end of the round, gold coins with skulls will scatter around the screen, informing of winnings.

It is also worth mentioning one more feature of the slot machine. The Skull sign has the function of replacing any other characters in the game, except for special ones. However, the sign does not operate at the position at which it falls, it can be moved on the field to stop at the position where it will bring the greatest payout.