If there anything famous among all the people exists, it is sport, precisely soccer. Worldwide known championships are held almost within every corner of the Earth, and no wonder that such a thing has an enormous number of fans.

It is quite often that a soccer fan may also be a gambler. Thus, why not to create such a slot that combines both of the listed players’ hobbies in order to deliver a truly funny and enjoyable experience in result? Thinking about that, Tom Horn Gaming slots development company created this masterpiece. It is called Soccer Championship, and this is a video slot devoted to football theme, and everything here is about it. 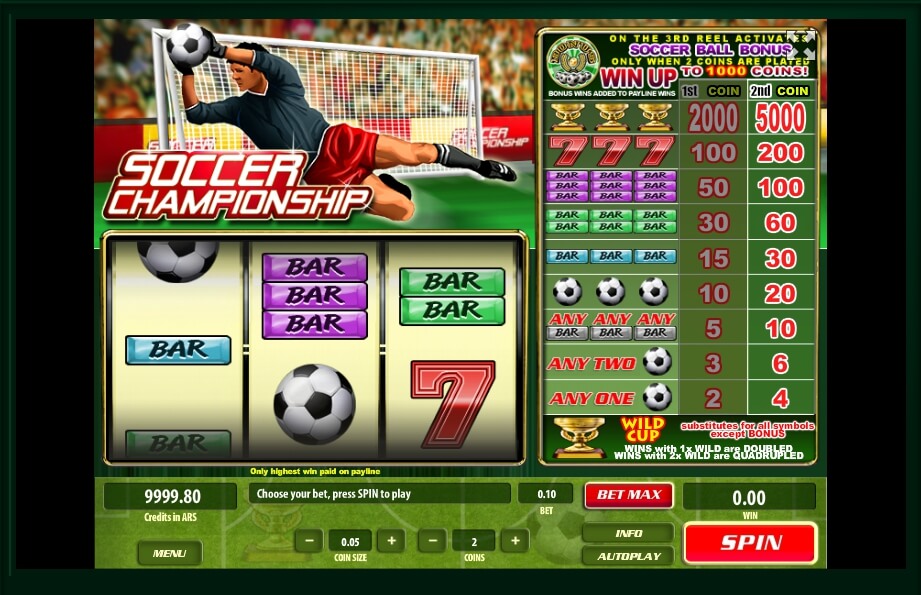 Other Games by Tom Horn Gaming

The slot`s design, thematic soundtrack, even the reels themselves and the symbols that fall off the screen remind gamblers of that kind of sport, and that is perfect, since all this creates the overall atmosphere, allows gamblers to touch and feel it with their hearts. Thus, why not to take a look what is inside such an interesting game?

Being faithful to the traditions of the original source of inspiration, Soccer Championship is a tough game with really tense playthroughs where everything is done in quite fast and fluent way. To begin with, there are only 3 reels that consist of 3 rows, which means the field itself is narrow and you are tied up with really a few ways to win.

As for paylines, there is only one of them, which makes the game even tougher than it could be and differs it remarkably from similar ones. The value of bets that can be placed here is limited to 2 credits maximum depending on an actual currency in use. Along with that, you can always go with the autoplay feature and let the game do everything for you.

As for special features, they are few, yet, remarkable. First of all, there is a wild Ball symbol that helps you to build up combinations out of nowhere in order to make a win. The second interesting point is a score-multiplier bonus game.

During that game, you are acting as a goalkeeper and should catch one of five flying balls towards your gates. Depending on the ball you have caught, your score will raise significantly, which makes overall gameplay a bit more interesting.

To sum up, Soccer Championsip is a good game for those who are ready to risk. It is good to remember that the slot itself can be played via demo mode. In that case, no additional download is needed, you also do not need to make special registrations, as well as you will not be asked about any bets.

By the way, you will have no options to withdraw your cash won. After you have trained good enough, feel free to open real-money gambling mode where an actual game starts, and the play for real begins. The game is available in demo mode in our online casino.