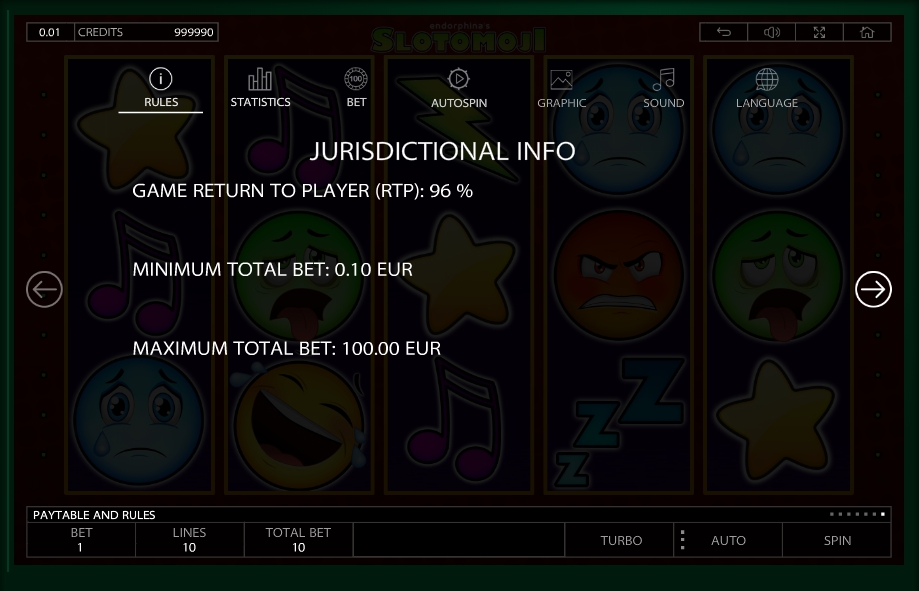 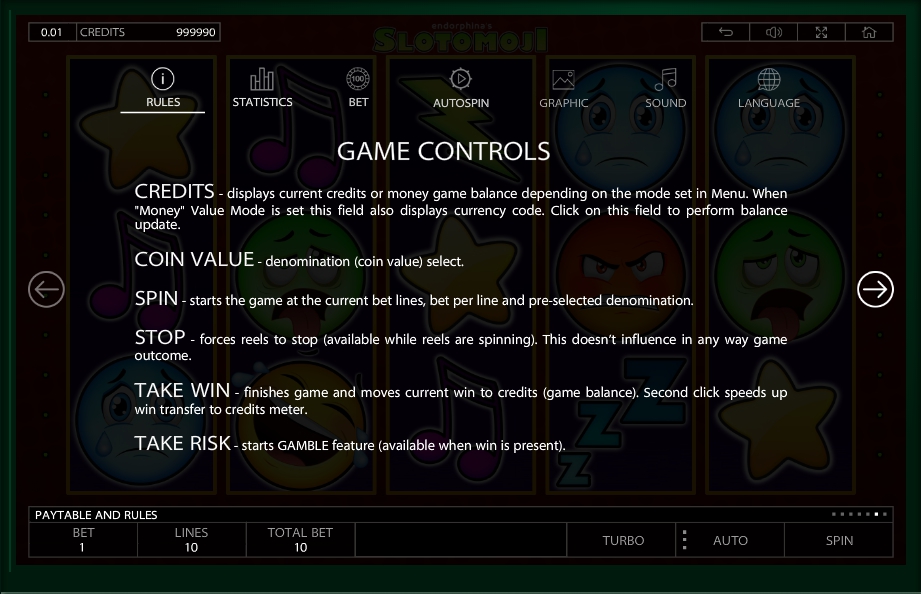 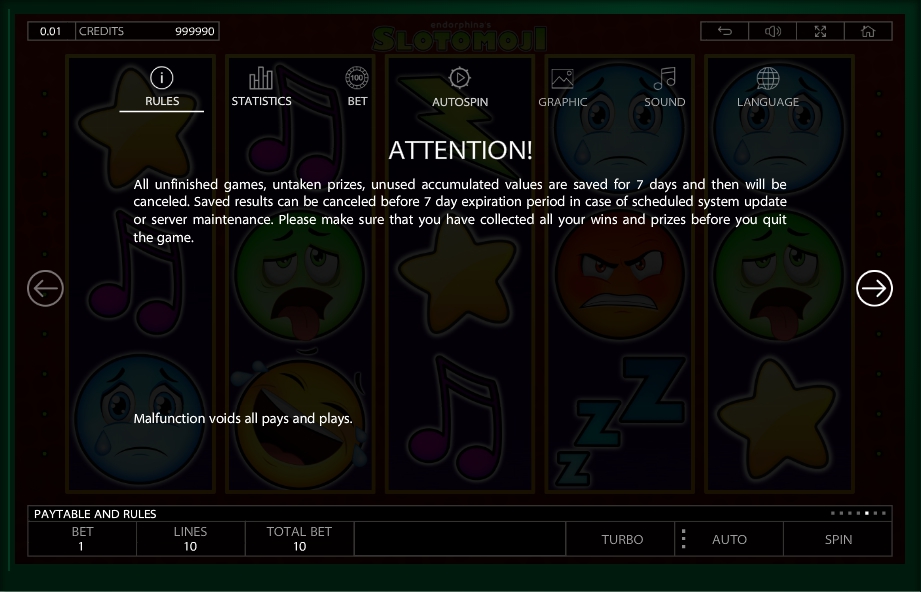 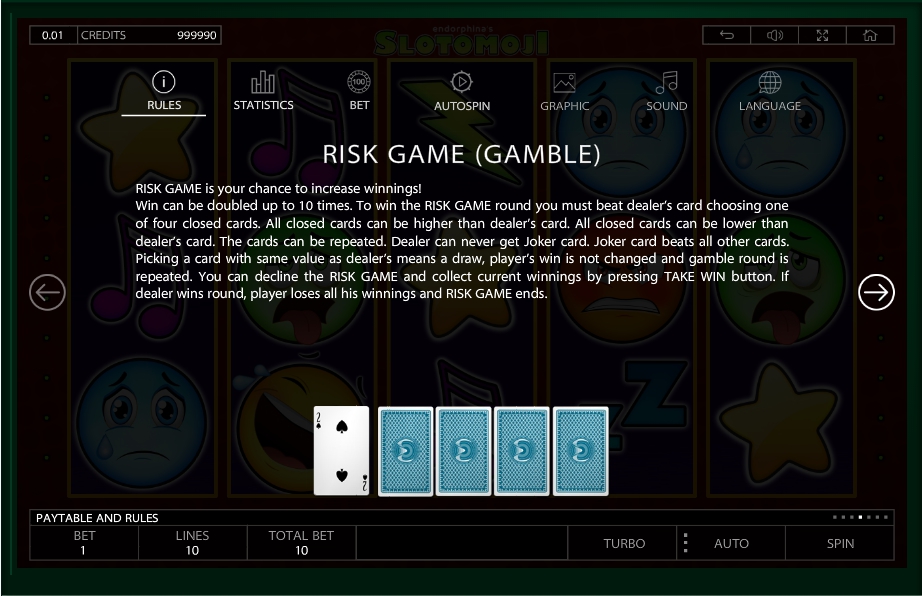 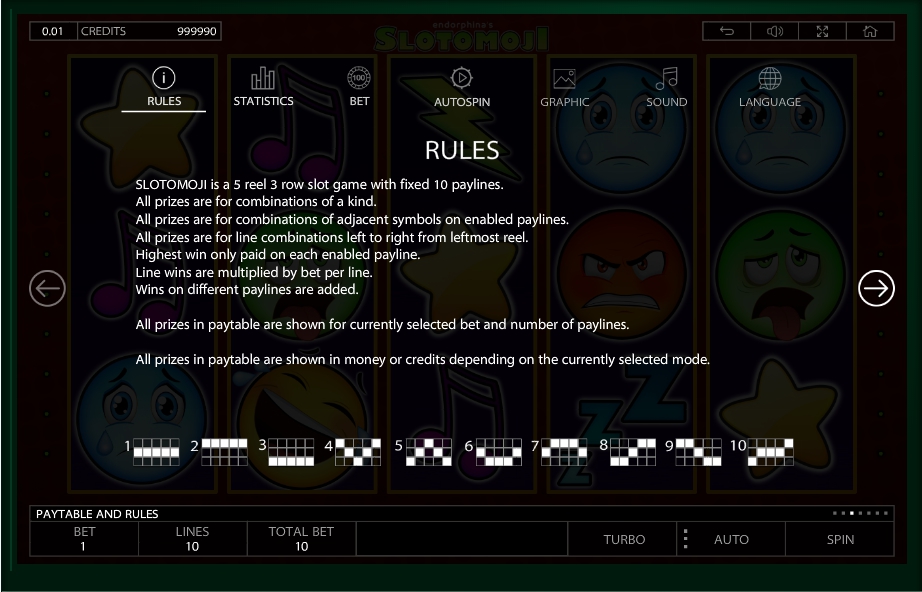 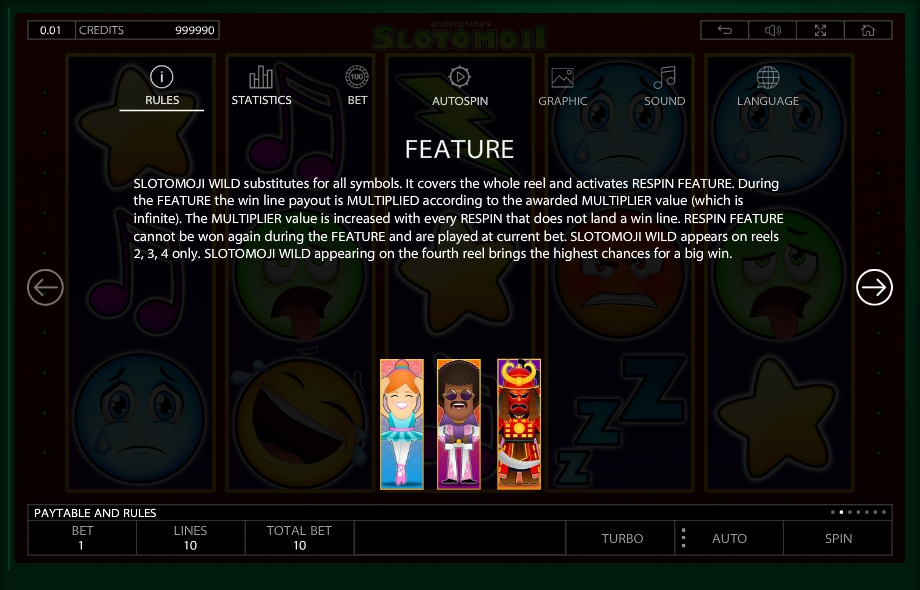 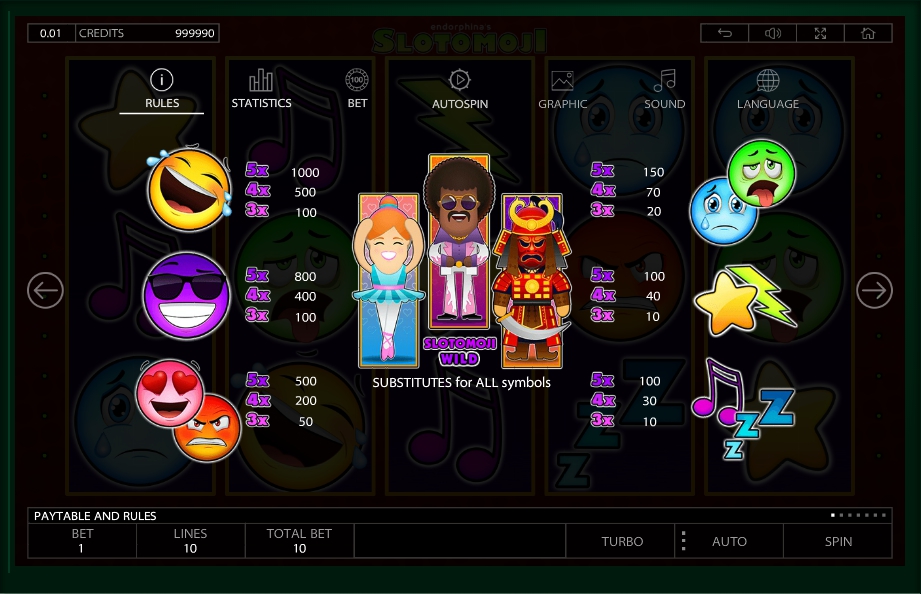 ”Endorphina”, being an Internet developer of games, created a very colourful slot machine, where every of us, internet users, can feel free playing. What is even more convenient, the Slotomoji Slot uses ”smileys” as its symbols. Not only in Las Vegas people prefer to play gambling. Everybody can try his or her luck and skills online. With this video slot, gamblers can get much fun and real money simultaneously. Why exactly such a title? There is a very easy answer. Emoji is a language of ideograms and emoticons used in electronic messages and web pages.

This graphic language, where combinations of pictures are used instead of words, appeared in Japan. Unlike emoji, emoticons arose as a means of depicting emotions by existing typographic means on the initiative of users. Nevertheless, some emoji, which designate persons, are referred to as emoticons.

The Gameplay of the slot is cheerful

The Slotomoji Online casino is brightly designed, having cute animations and pretty sounds. Almost all of the symbols are emoticons: a rosy face with hearts-eyes; a sorrowful weeping face; a ”lol” (”laughing out loud”) face; a disgusted face with a drawn tongue; an angry one; a violet with sunglasses and a smile from ear to ear. In addition, here you can find purple notes, a yellow flash, an orange star and blue ”zzz”.

All of these symbol types are going appear on 5 reels. (They are represented as a separate unit, but act as one.) With a functional ”Lines” button, you can settle/change a number of paylines, which by default is 10. A size of your wager, which you have to choose, can be got from the range of from 0.010 to 1.00. ”Total Bet” will help you with regulating a total wager.

Pressing ”Spin” and watching how the reels are turning, you will hear a cool music. The Slotomoji Slot contains the ”Auto” button as well. (It performs a role of the ”Autoplay” option.) The button, which “kicks” the reels faster is called ”Turbo”.

After you land a winning combination, two buttons, of course, not at one time, can be pressed. One of them is ”Take Win” and the second one contains a signing ”Take Risk”, which will bring you to an extra screen with the ”Gamble” game, where players have to guess suits of cards.

Cute features and Bonus rounds that can be played

Funny ”Ballerina” (can appear only on the 2-d reel), a fashionable wore of 70’s ”Disco dancer” (can be found on the 3-rd one) and a cruel ”Samurai” with a large sword (protects the 4-th reel) have the functionality of the ”Wild” symbols.

If any of them is landed, it will activate ”Free Spins”, the re-spinning feature. There is no jackpot in the Slotomoji Slot, but you can win the largest prize of it – 10,000 (!!!) coins or dollars (if you play a ”real” game and not the test one).

Leave stereotypes about mandatory downloads and registrations! Here you will face none of these both limits! Unwind and ?