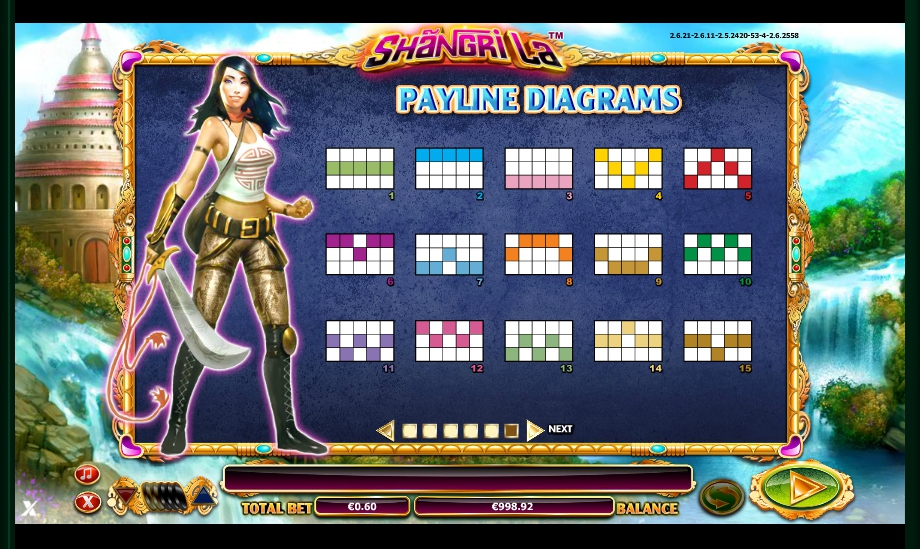 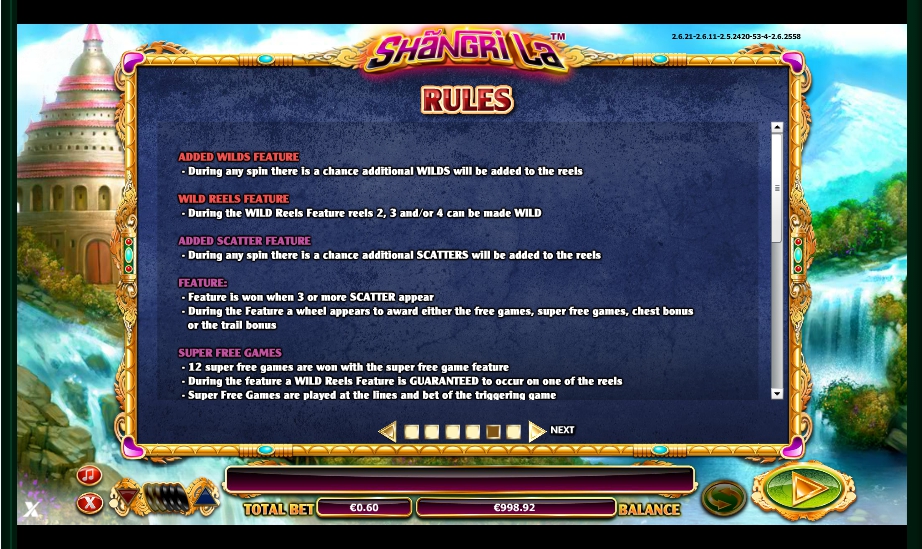 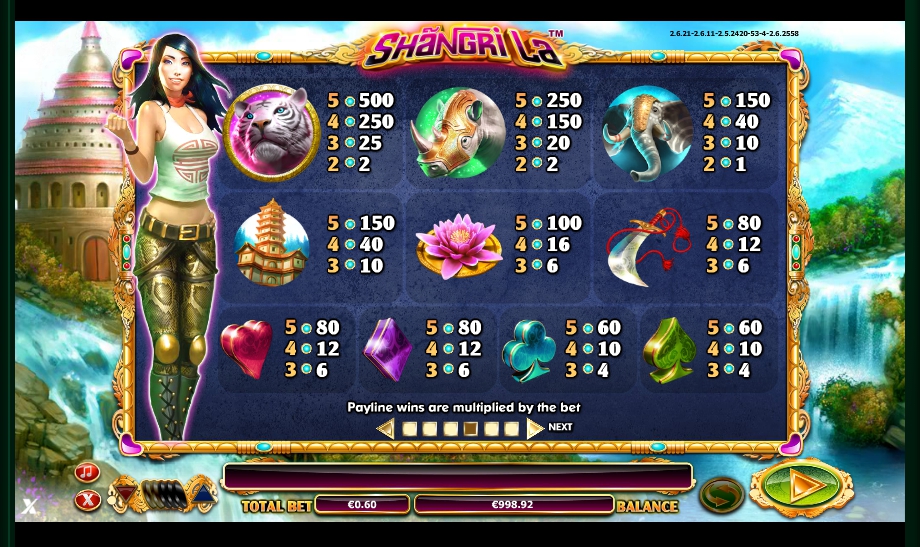 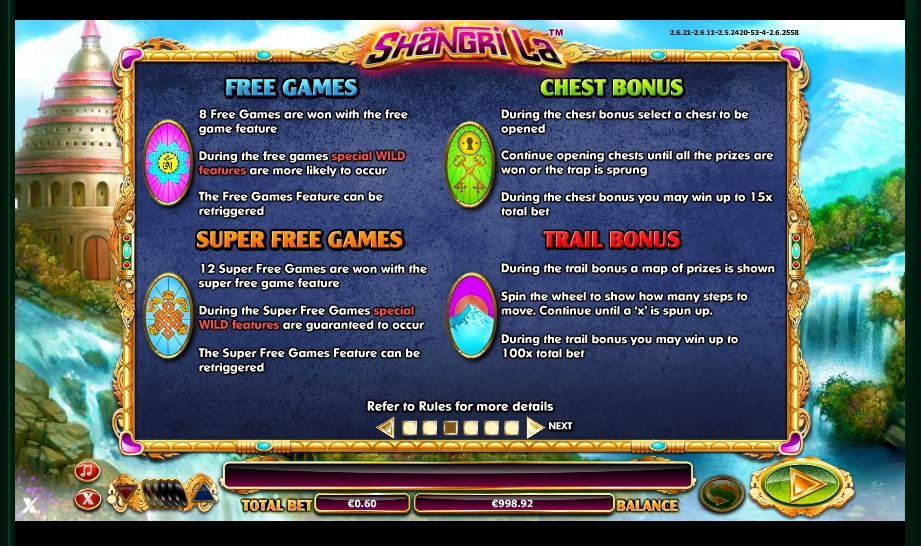 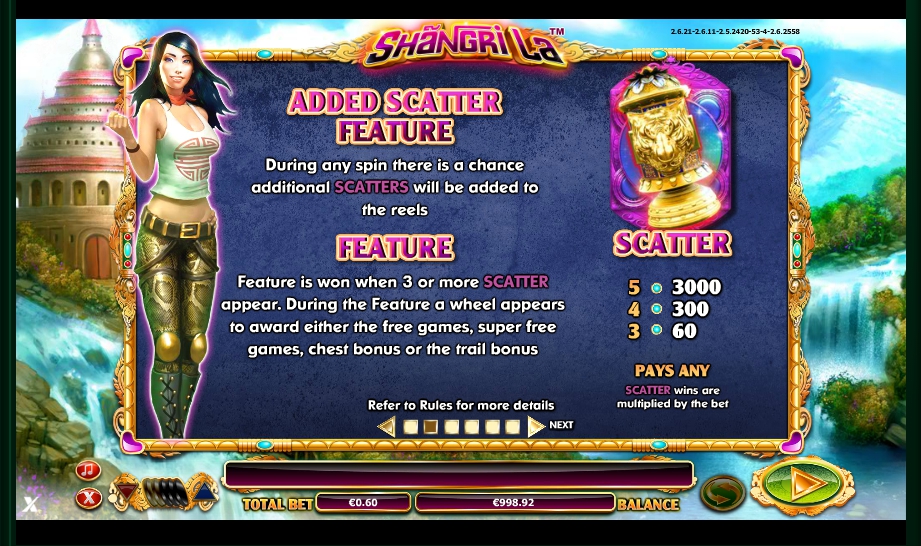 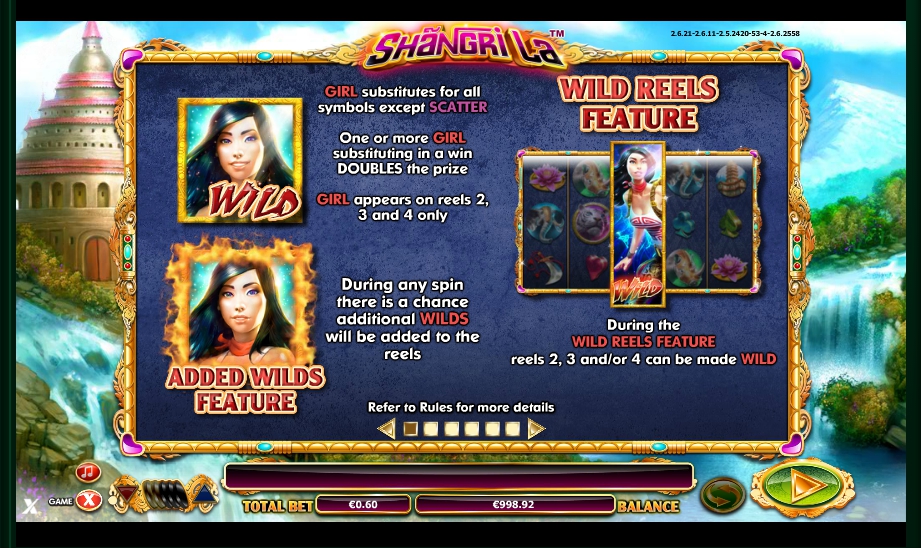 Shangri La is a new slot machine on the mythical subject from the NextGen Gaming company which has five reels and 15 game lines. The gambling machine has even seven bonus rounds, three of which are started during the main game, and remained four are activated at loss of a symbol of a scatter and can bring up to 24 free games with additional function by Rand Wild.

The design of the Shangri La Slot is based on the novel by James Hilton “The lost horizon” who has thought up the name to the fictional city of Shangri-La. Playing the new slot from the company NextGen, you will be moved to the earthly paradise in a mythical Himalaya utopia – all thanks to the game screen which is located against the background of the temple with beautiful falls.

On reel it is possible to see a symbol of a white tiger, rhinoceros, elephant, the temple, a flower of a lotus and sword and also an icon of all four suits. The most expensive is a white tiger, he can bring up to 500 coins for one game line.

However the most important, is a symbol of a gold statue which activates four bonus rounds and can bring up to 3,000 coins.

Simple symbols – the suits stylized under jewelry the saber, a lotus, the mystical temple Shangri-La and also three portraits of the animals protecting an entrance from uninvited guests make prize-winning combinations on the fixed chains.

The brave traveler who has reached the mysterious temple is given with the Wild function and accommodates on average coils:

Three collected symbols with a gold statue activate free functions. At the start of a bonus on the screen there will be a wheel on which will be located four function bonuses:

– Free spins – at you will be eight free rotations with additional wild characters which can appear in any place of the game screen. In total it is possible to receive up to 16 rotations.

– Super Free Games – you receive 12 free games with a special Wild character which with guarantee appear in case of each rotation and if happens, then it is possible to receive 24 free rounds with the guaranteed wild character.

– Chest Bonus – here you should select chests, the cache bonus is behind each of which, a game will continue until you do not benefit all bonuses, or the trap will burst.

– Trail Bonus – you will rotate a wheel on which game coins will be located, you can increase the bet a hundred times in case of each rotation, but a game will stop if on a reel to appear the character” X”.

Sale of the Century