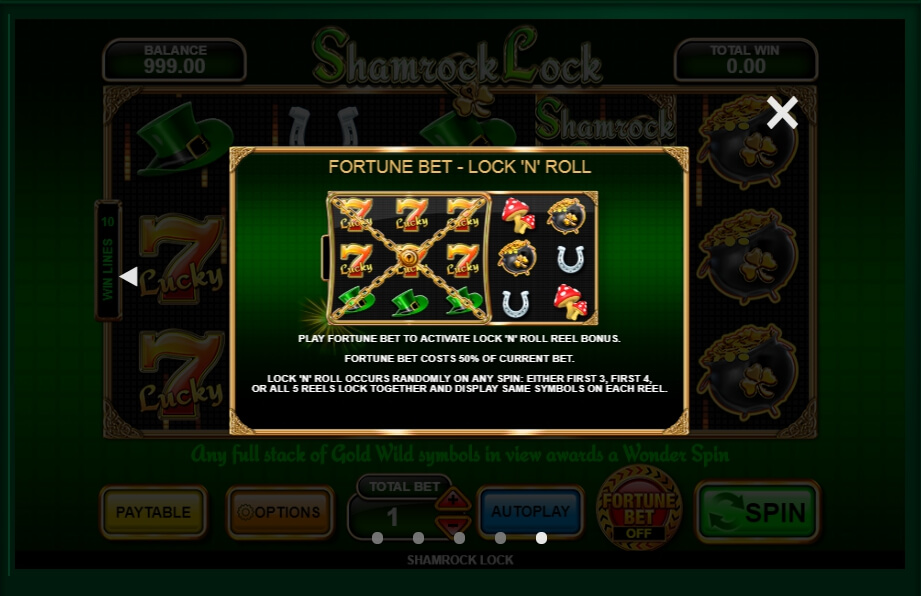 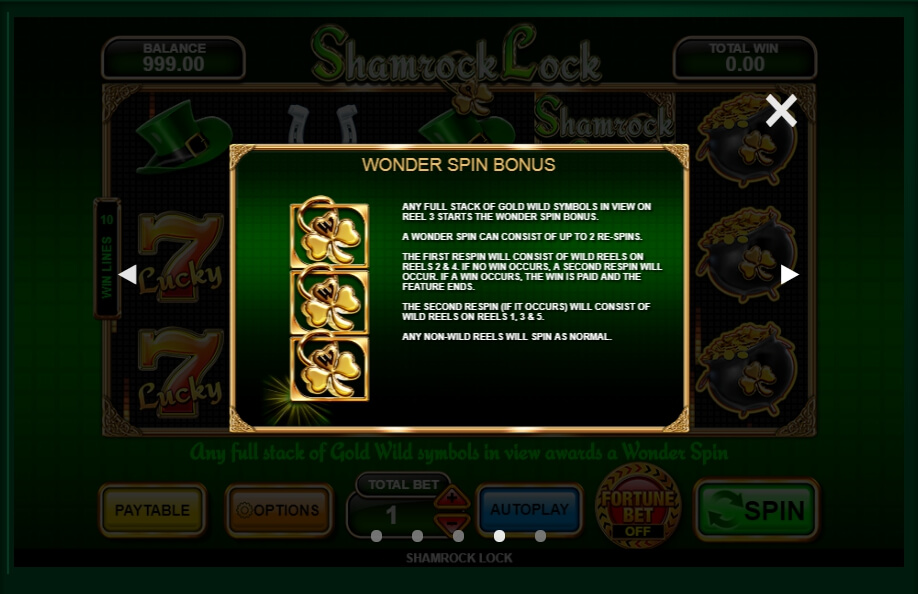 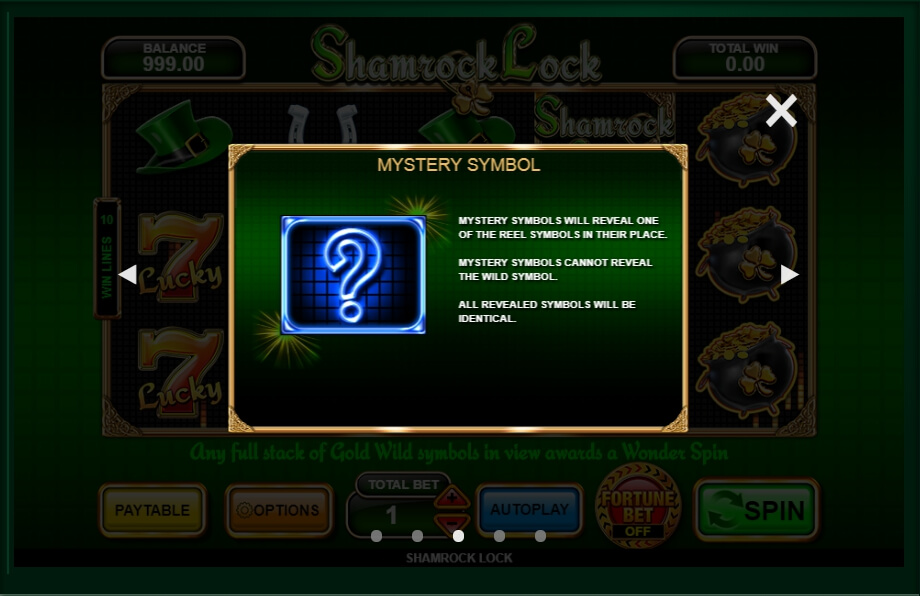 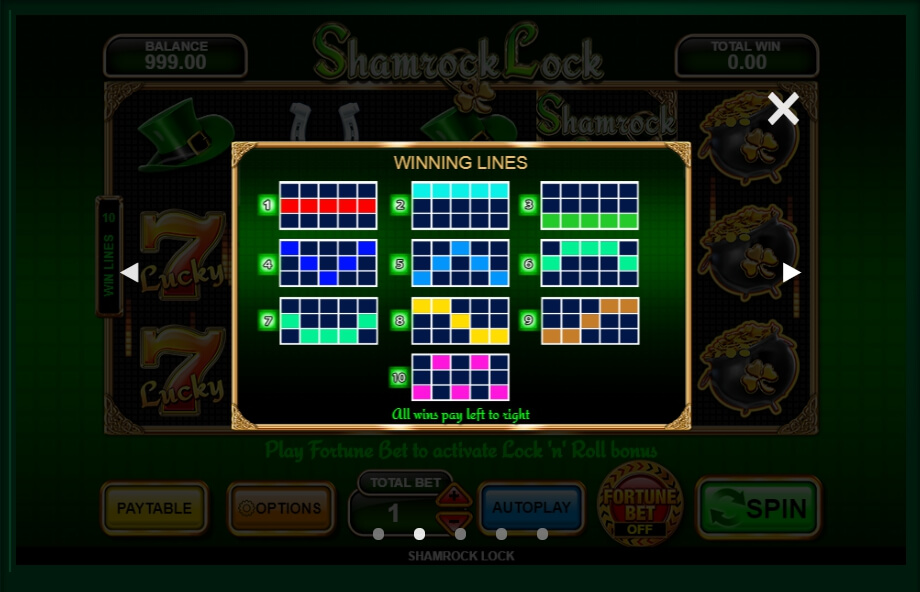 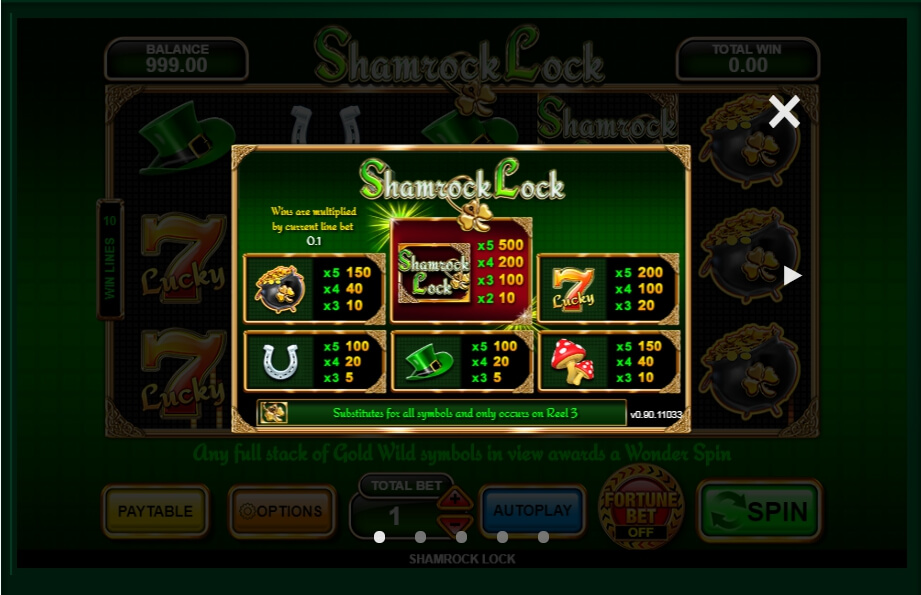 Years ago, in order to find a pot of gold coins you would have to travel to beautiful Ireland, find and somehow catch a mysterious Leprechaun. In addition, even success in these actions could not guarantee you a prize, as those little green creatures are known to be tricky and deceptive. However, things have changed since those horrible times and now you can try to get the gold by playing slots machine. You don’t even need to travel to Las Vegas to do so!

All you have to do is just go online, find the Shamrock Lock slot game, made by Inspired, and play it. Moreover, that is exactly the order of operations you will have to perform to get to the coins, as this game requires no downloading and even no registration.

Even while Leprechauns are magical creatures, their strength is apparently proportional to their size. Therefore, Leprechaun’s gold pot in Shamrock Lock is large, as the jackpot in this game is 10,000. However, winning the jackpot is not the only way to get real money in Shamrock Lock. The game features 5×3 spinning reels and 10 win lines.

A combination of 3 symbols (or 2, in case of Shamrock Lock) has to be collected in order to win. Among the symbols, players can see a Leprechaun’s hat and a lucky horseshoe (these ones pay the least), an Amanita mushroom and a pot of gold (these ones pay slightly higher) and a lucky seven that pays the most. Sometimes, large question marks will appear on the reels in some places. Those are called the mystery symbols. Once the reels stop, all mystery symbols transform to identical other symbols, and only than symbols at paylines are counted.

From time to time, one or more golden four-leaved clovers that serve as wild symbols appear on the third reel. Most of the game arts, including the background, are performed with the prevailing green color that is pleasant for eyes and reminds of Ireland. Presence of the Turbo mode that is not something uncommon for Inspired games, allows you to play this game with the higher speed.

Shamrock Lock has the button, called the Fortune bet. Turning it on leads to an increase of gambled money amount by 50 %, but allows random activation of the Lock’n’Roll bonus. This bonus locks up from 3 to 5 reels and makes all the symbols on these reels the same that can give the player great profit.

The Wonder spin bonus is another interesting bonus mode of Shamrock Lock. It turns on in cases when all the 3 symbols on the third reel are wild. Once Wonder spin occurs, the second and fourth reels are filled with wild symbols, and other three reels spin. If player wins nothing from this spin, the first, third and fifth reels are the turned wild, and another spin is performed.

The Grand National Race of Champions