Sam on the Beach Slot Machine 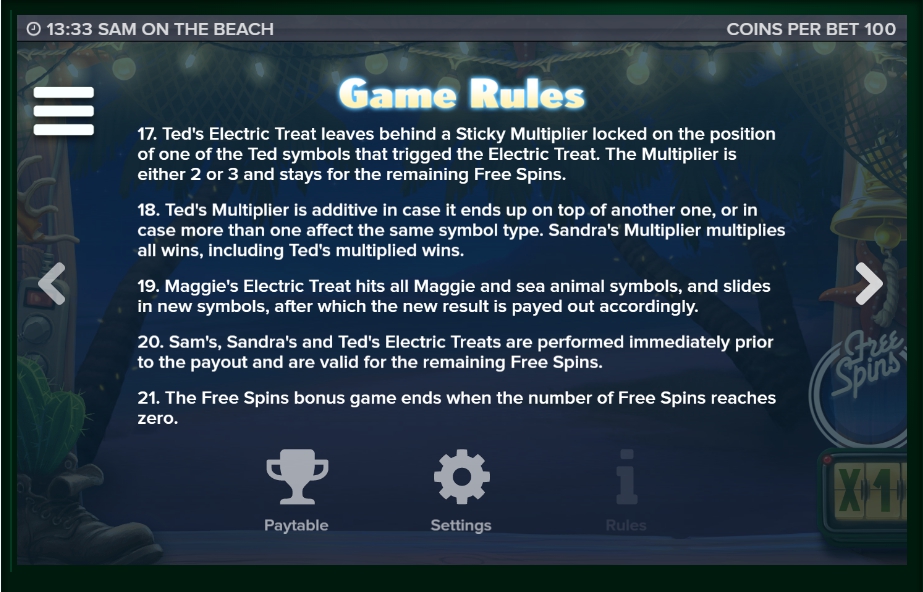 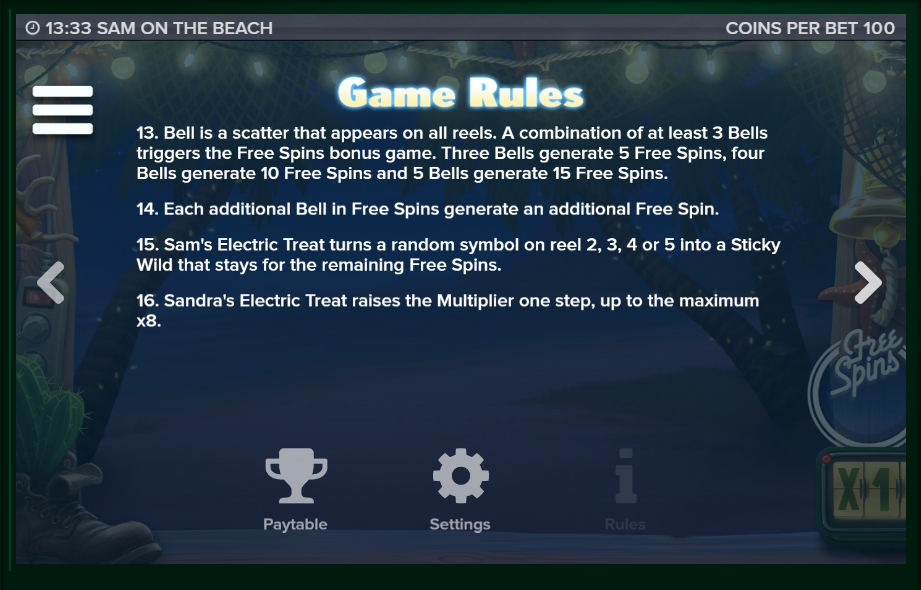 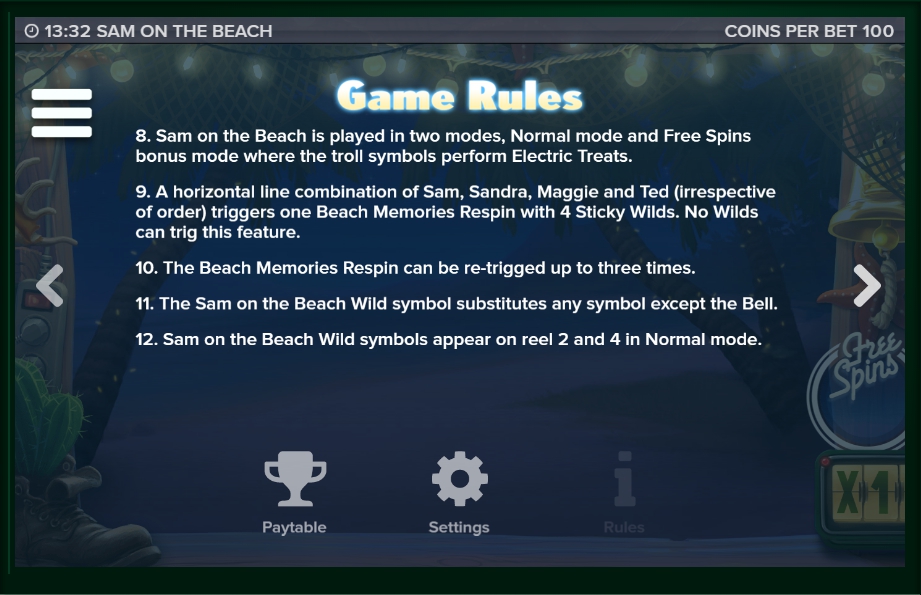 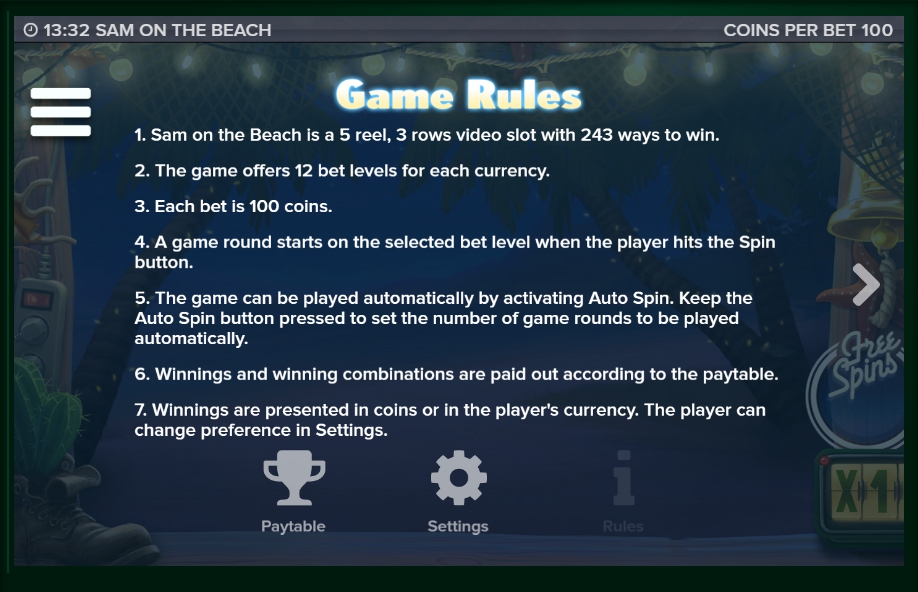 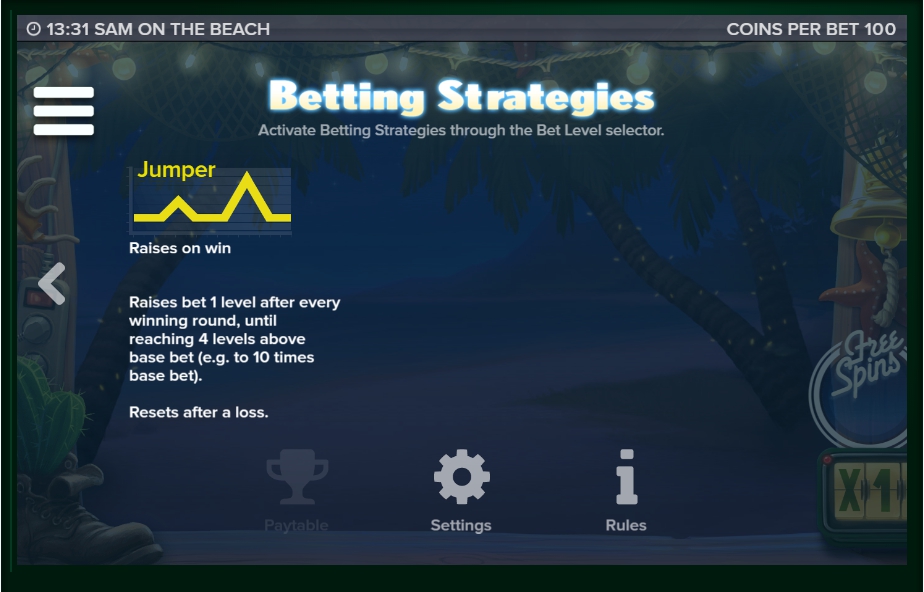 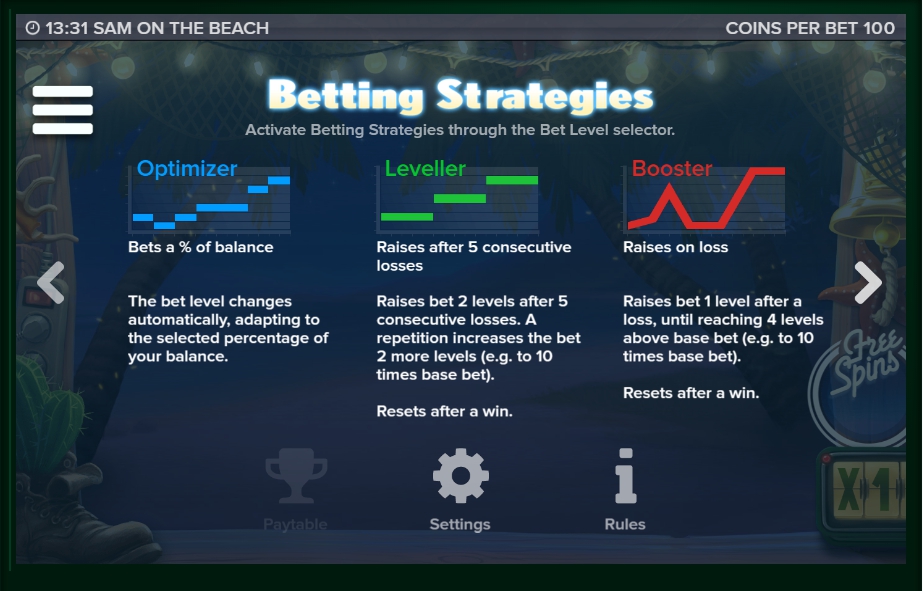 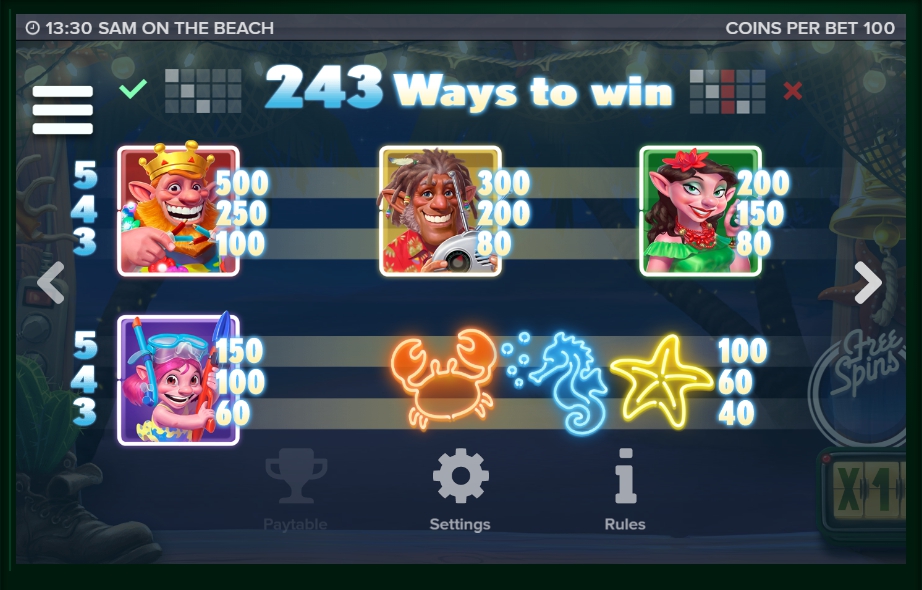 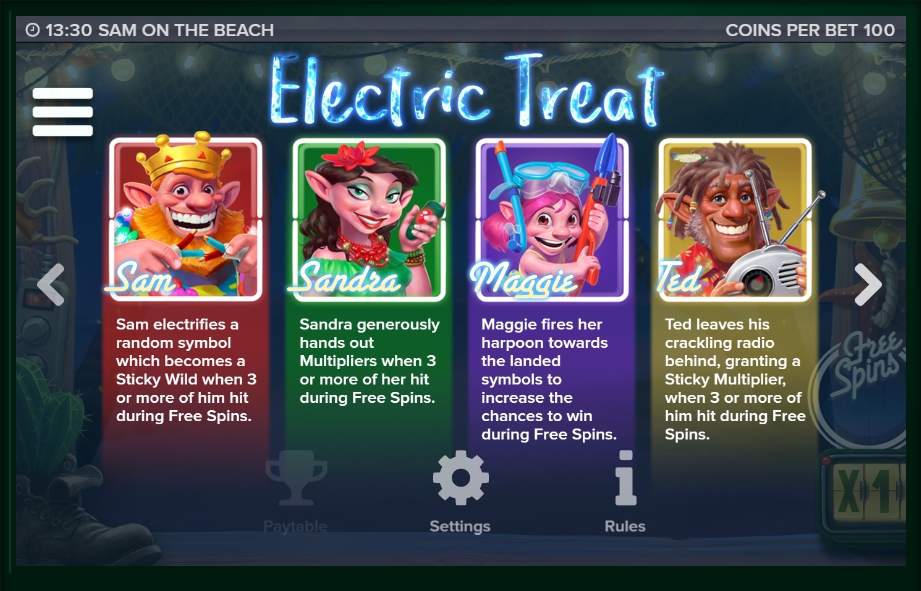 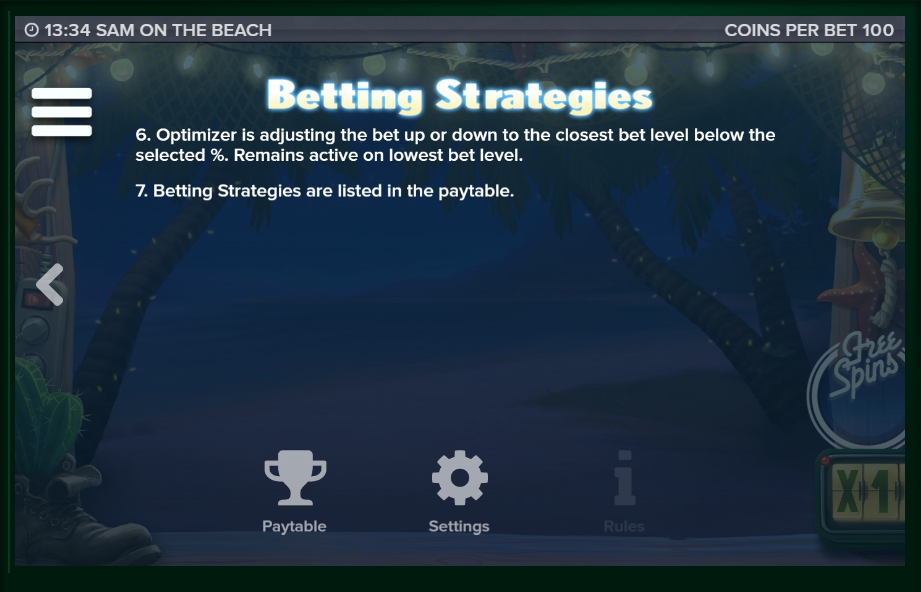 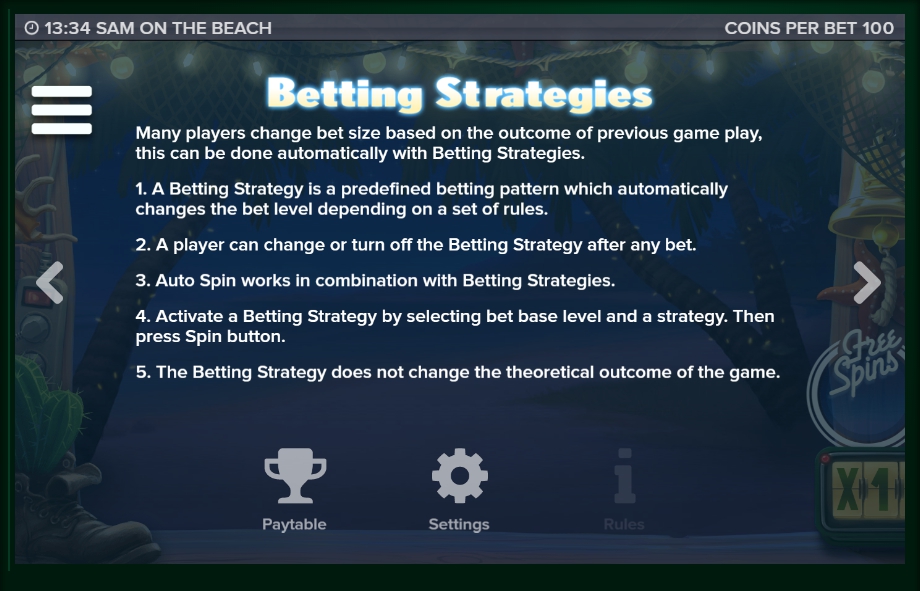 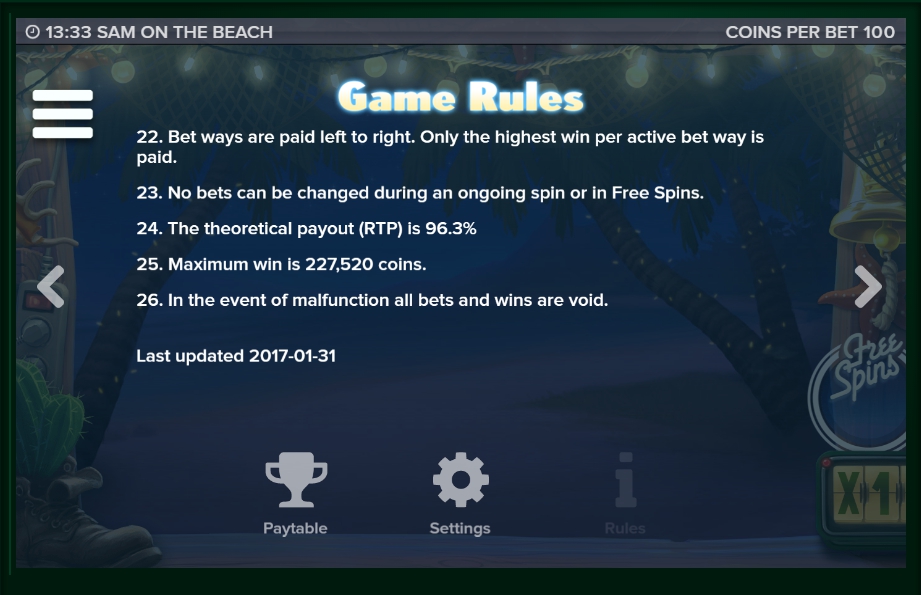 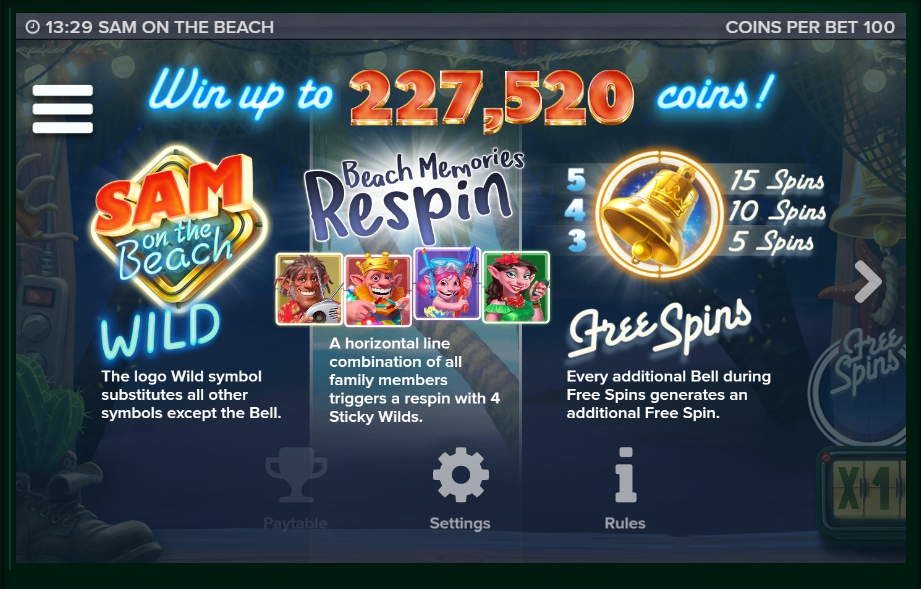 Sam on the Beach Slot Review

Fairy-tale characters very often become heroes of video games. Replenish the collection of slot machines, where the main role is assigned to the fantastic creatures, Elk Studios also decided. Video slot Sam on the Beach is one of the best, through which, players can discover a magical fairy world and earn good winnings. Developers at the virtual slot game playground, carried a fairy tale story about the king of trolls Sam, who wanted to use the blessings of the human civilization in his kingdom. Mostly – to conduct electricity. Tired of public affairs, the monarch goes on a vacation to the ocean coast. Even here, Sam will not sit idly, especially since the company of trolls he meets, is very funny. The sunny island provides a pleasant time.

To give the participant a possibility to see the picturesque picture of the exotic island, the manufacturer made 5 gaming drums transparent. Therefore, you can see a blue ocean in front of you, which merges on the horizon with the sky. Waves are running and you hear the seabirds.

High palm trees spread out their branches, creating a cool shadow, where it is nice to sit, drinking a tropical cocktail. To control the keys do not interfere with enjoying the beauty of the island, they are placed at the edges of the screen and the conventional signs are also there. It is easy to believe in the reality of the events presented due to a high-quality visualization and animated screensavers. The game process accompanied by the sound of waves and clockwork tropical melody. Virtual slots of this manufacturer stand out among others because the function keys do not have labels, but only icons. The function of each button is clear to every user. By clicking on the circular arrow to the right, the player starts the reels. Above it there is a key to turn on the automatic rotation mode. To the left, there is a key with a pile of coins, which will help to determine the size of the bet. To familiarize yourself with the rules of the video game and the size of the payments, click on the button with three bars. Before you join the company of funny characters, you should determine the size of the bet. The video slot has several strategies, according to which, the number of credits will change automatically, depending on the situation on the playing field.

The logo of the video slot acts as a wild sign. The scope of its operation is limited. It appears only on the 2nd and 4th drum. The bell is scattered and does not bring payouts, It triggers bonus rotations the number of which depends on how many scatter symbols are present on the reels. During the free spin round, additional bonus options are included. Sam’s Electric Treat: Sam can turn any of the game symbols on one of the drums into a wild sign. The resulting wild will remain in place until the round ends. Sandra’s Electric Treat: The aim of this option is to increase the multiplication factor with any of the next rotation of the drum. The maximum value is x8. Ted’s Electric Treat: The protagonist adds sticky multipliers to free spins, an action that ends with the end of the round. When one horizontal line with four main characters is built on the playing field of the video slot Sam on the Beach, i then one more prize function is activated – Beach Memories Respin. It involves re-starting the reels, during that 4 Sticky Wilds appear, which are fixed on their cells.

Sam on the Beach Slot Symbols

Logo of the game: wild symbol