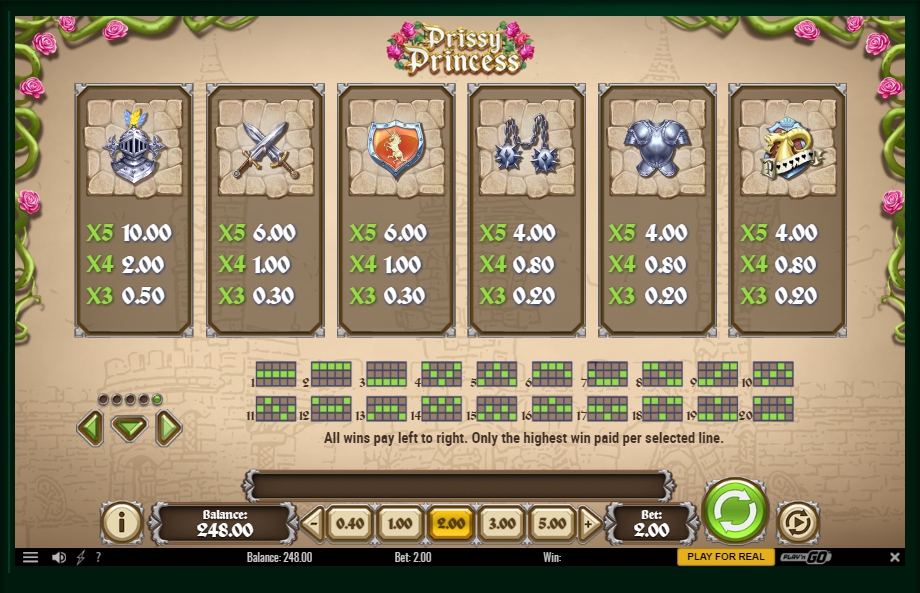 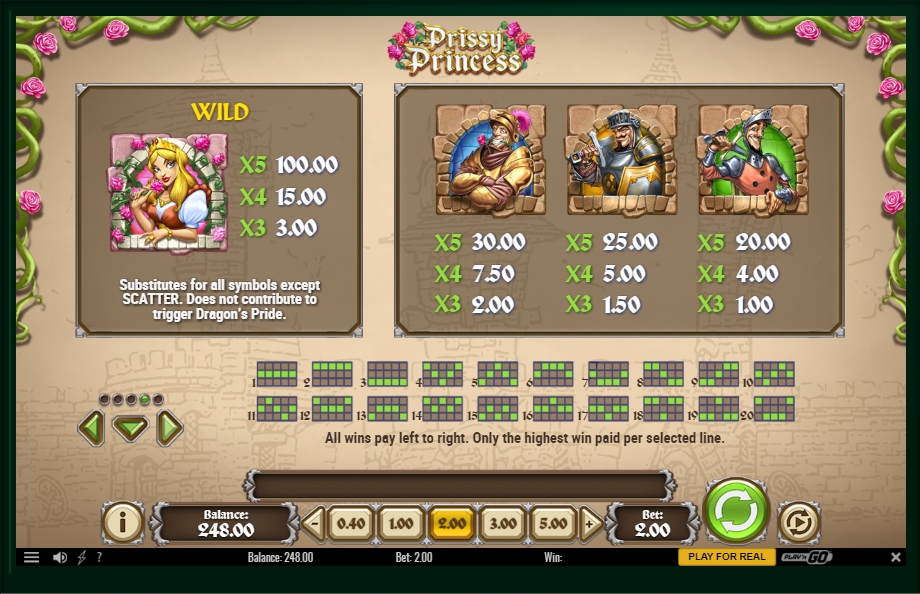 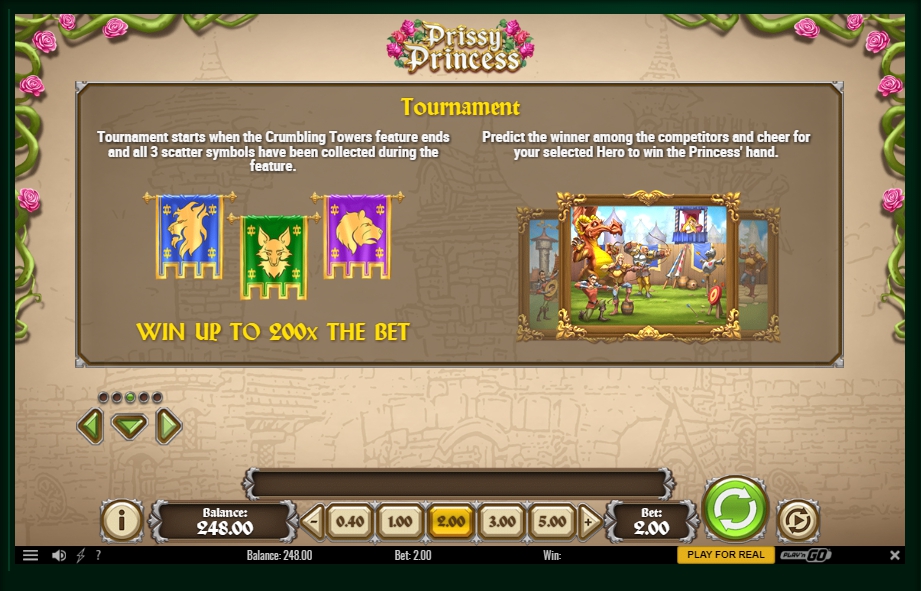 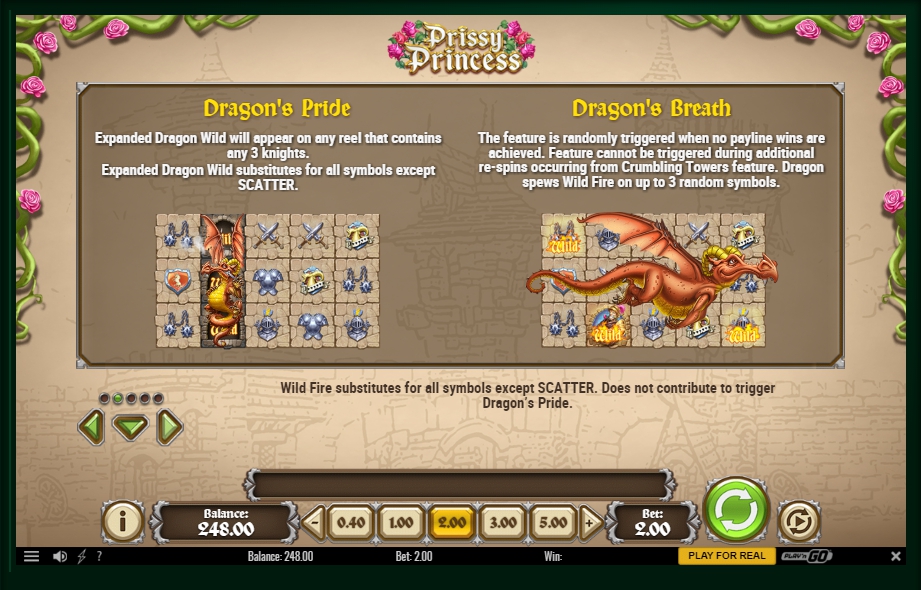 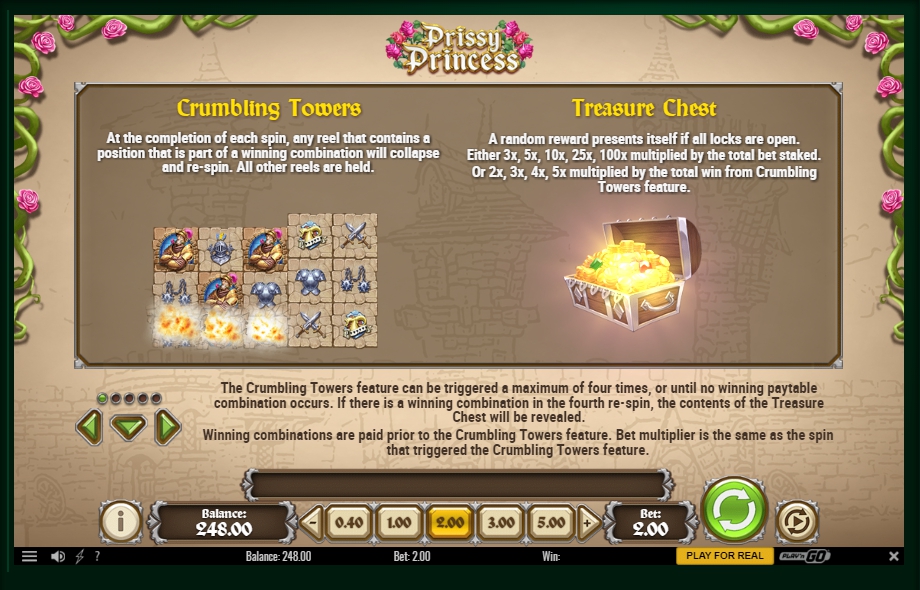 Why do we love video games? Because it is a great opportunity to visit any country, make time in time and meet with different people. The gaming machines guarantee the user a rest and unforgettable adventure. One such is the Prissy Princess emulator from the well-known manufacturer Play’N Go. From the name of the machine, it becomes clear – the main character is a young girl, well-mannered and capricious, as the daughter of the king is supposed to. Extraordinary adventures become the basis of the game process.

The plot of the Prissy Princess revolves around the life of a medieval princess. A capricious girl who chooses her bridegroom inspired the developers to create an intriguing plot. The design of the slot machine is original and intriguing, it admirably conveys a fabulous atmosphere. Events unfolding on the screen occur in the royal castle, which is depicted in the cartoon style. Numerous thematic pictures and characters’ images also differ in quality styling, creating an unusually fun, wonderful mood. The user with enthusiasm will plunge for unfolding on the screen intrigues of the royal court, after all developers use original graphics receptions, allowing to fully realize the peculiarities of this unusual slot.

As a background of the playing field, stone slabs of the castle are used. The back plan of the machine is made in a dark blue color, symbolizing the approach of the night. The game is accompanied by high-quality audio effects, and thematic images create an ineffable color, immersing gamers into the world of brave heroes, kings and queens, tournaments and chivalry.

Beautiful styling is different and the navigation bar, located at the bottom of the screen. The slot machine has a wonderful splash screen that starts at the very beginning. The control keys are standard. With the help of informative windows gamer tracks the number of gaming credits and the number of winnings.

Before starting the game, it is recommended to familiarize yourself with the data of the payment table, which allows you to understand the intricacies of the game process.

If the user managed to create a prize combination, the interactive option Crumbling Towers will be pleased. Verticals containing winning symbols disappear, collapsing and giving way to new columns. Dragon’s Pride is a mini-game that starts when three knights appear in the column of the playing field.

They are replaced by the image of a fire-breathing dragon. Dragon’s Breath – the name of another interactive bonus, launched during the main game. The virtual dragon breathes fire, creating additional wilds on one, two or three positions. Tournament – a bonus, opened when the user has 3 different tournament flags and the opening of a mysterious chest.

Entertainment something like a win-win tote, where the gamer should point to the knight-winner. In any case, the player receives prizes.

Rich Wilde And The Aztec Idols

Rich Wilde and the Shield of Athena