You can not play this game for free
For free slots game go
Play free
or
(29 votes)
Game Played: 4
Full screen: close 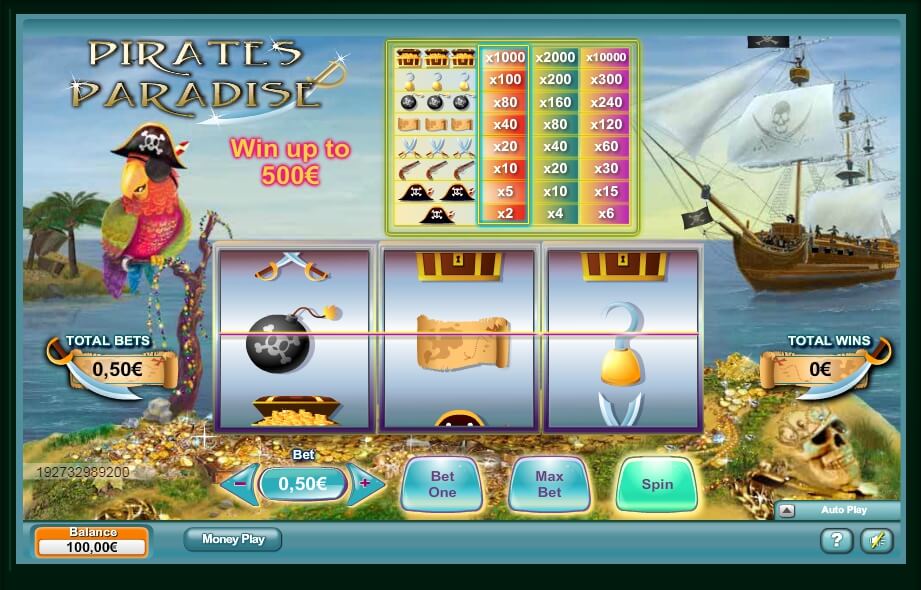 Few centuries ago, seas of the Earth were plagued with all kinds of pirates – corsairs, privateers, buccaneers and so on. In their eternal quest for treasures, they killed many innocent sailors, burned many trade ships and pillaged many peaceful coastal towns. However, even in that times image of pirates was highly romanticized, as they were a symbol of freedom. As years passed, pirates become more a legend than real threat, and fear of them was forgotten. Instead, the life of pirates tended to be thought of as everlasting adventure.

Nowadays pirates are largely represented in the pop culture, including movies, literature, music and, of course, video games. As pirates liked gambling and largely depended on luck, it is no wonder that every year a lot of pirate-themed online games are released, including slot machines. Pirates Paradise by NeoGames is one of such games, where you can win real money. As real pirates do not like any formalities or bureaucracy, this game requires no registration and moreover, even no downloading is needed to play it.

Apparently, even nowadays pirating is a profitable business, as a jackpot in Pirates Paradise can be as high as 200,000 euro. In order to try to win it, players have to spin a single 3 x 1 reel. There are 7 paying symbols in Pirates Paradise – a pirate hat (that pays the player bet x2 even when there is only one of them is on the reel), a pistol, a saber, a treasure map, a bomb, a pirates hook and a treasure chest that pays the most when collected (bet x 1000). The bet value can be varied in the range from 10 eurocents to 20 euro.

Furthermore, by hitting the “Bet One” and “Bet Max” buttons, situated in the lower part of the game screen, the player can choose between one of three paytables. The first one is the basic one, the second one multiplies both bet and all of the rewards in 2 times, and the third one multiplies the bet and most of rewards by three, with the exception of reward for collecting treasure chests.

When the third paytable is active, reward for collecting three treasure chests is set to be as high, as bet x10,000, and it means that winning the jackpot is possible only when the third paytable is active. Taking the paytable mechanics into account, the total bet therefore can be varied in the range from 10 eurocents to 60 euro. The game can be set to the autoplay mode with adjustable spins number. The game graphics and animations are pleasant and quality made, but not too impressive.

Pirates Paradise is a single payline slot game that is played on the smallest of all conventional reels. It can be said that this game has only one feature – its simplicity. So spin the reels and believe in yourself.

Other Games by NeoGames