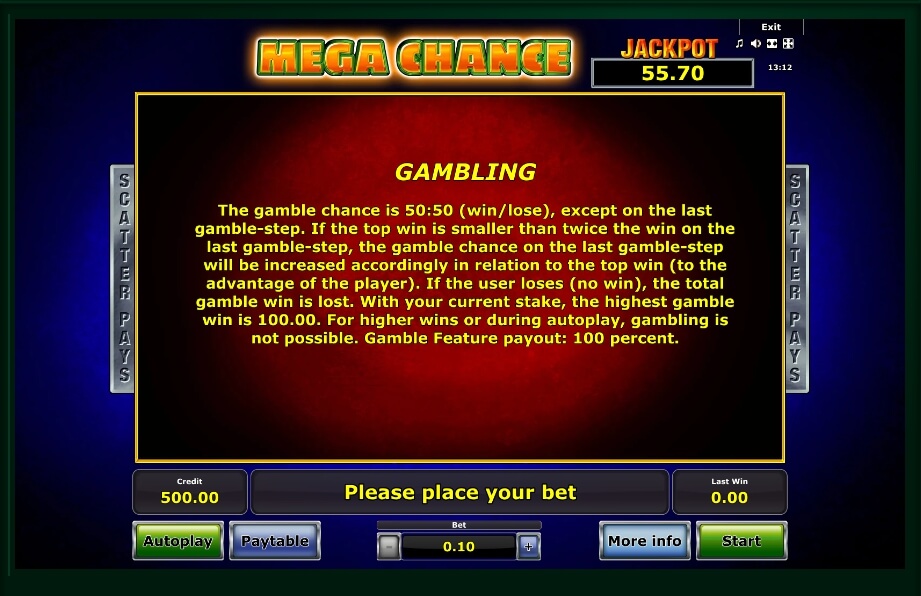 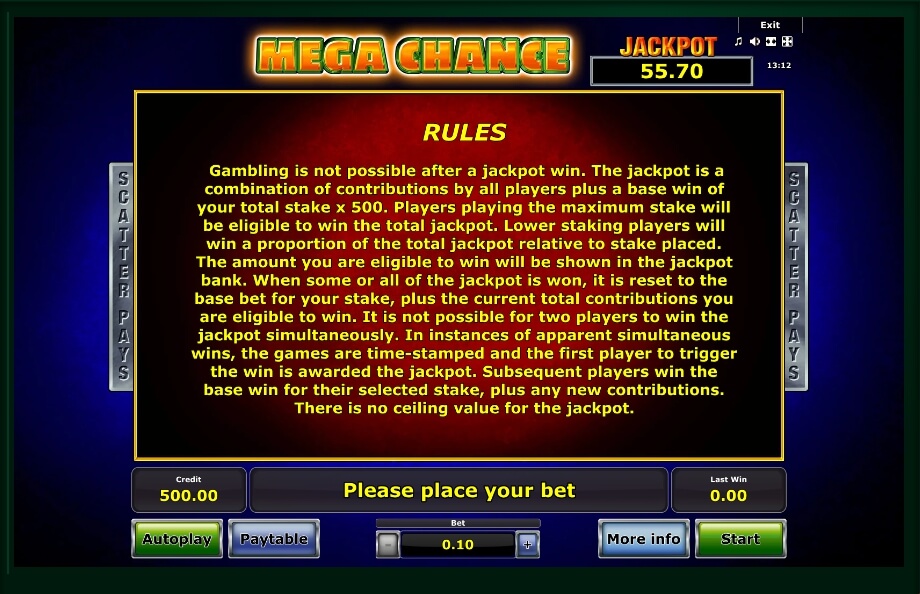 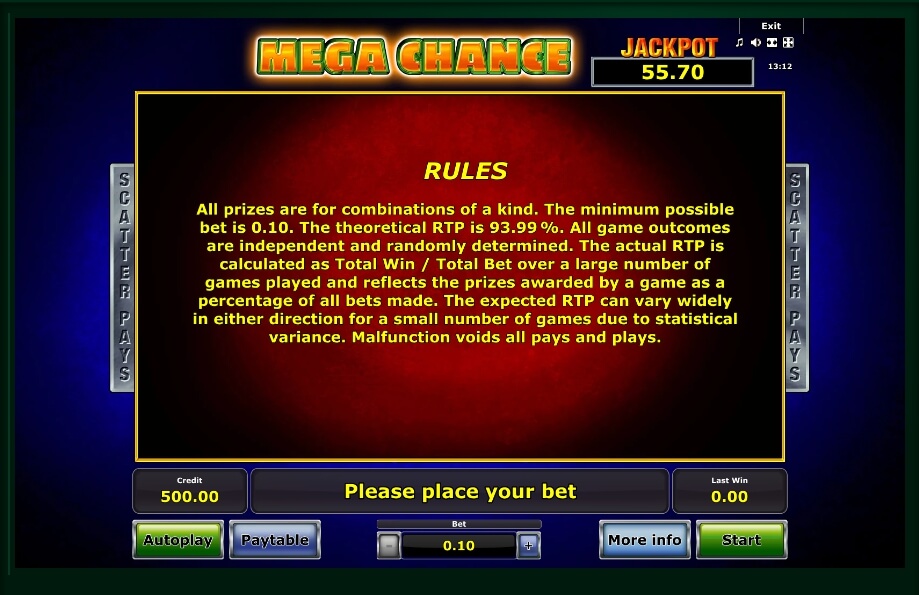 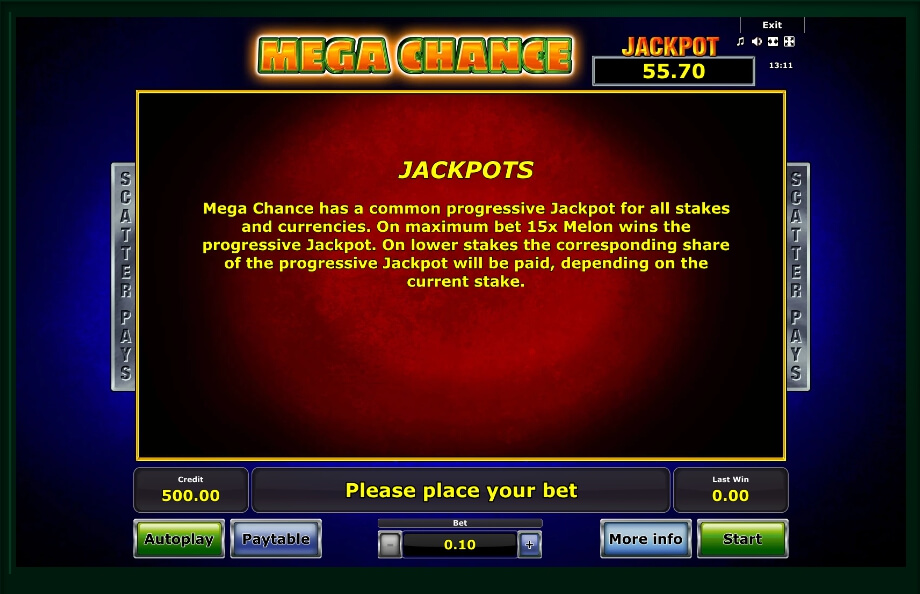 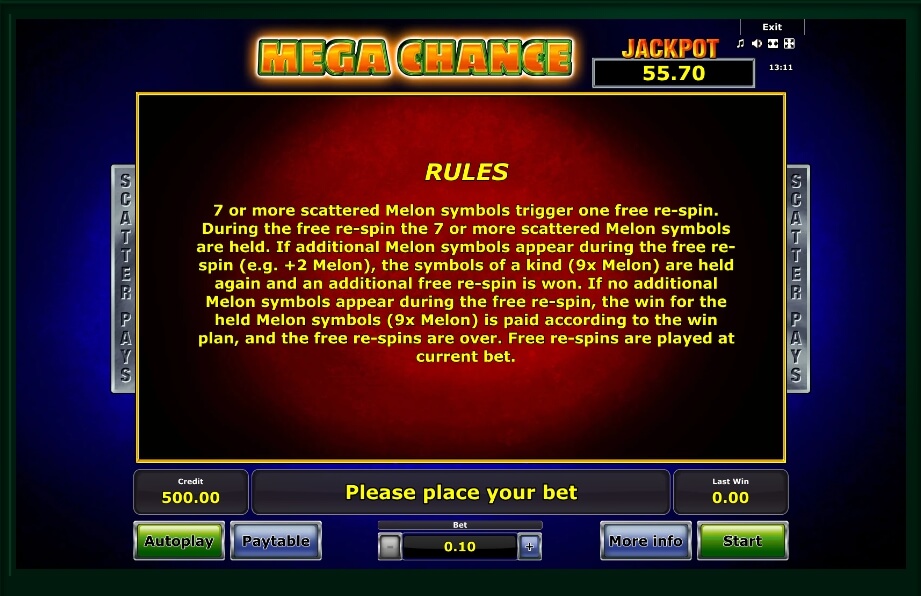 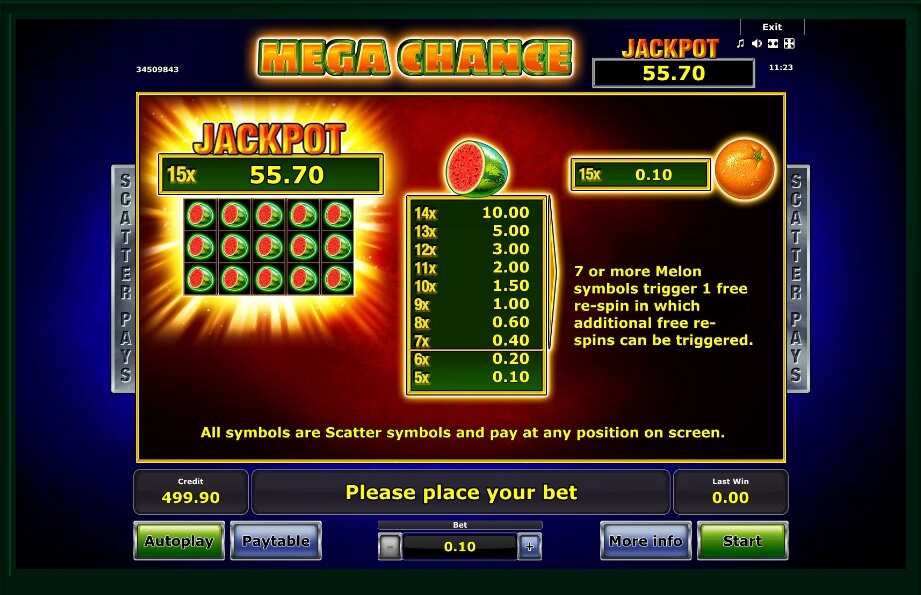 It’s no secret that the developers of the famous Greentube company are able to unexpectedly and interestingly embody unexpected functions in their video products. At the same time, they remain unchanged with the travelers, as simple and even a little ordinary design. Therefore, looking at the Mega Chance slot machine, you may think that this is just another five-drum variety of fruit classics. But we recommend that you take a closer look at all the possibilities of this novelty.

A fascinating type of entertainment has already surprised a hundred our highrollers. In doing so, we give you an opportunity to play in the mode where there is no registration and there is no downloading. Only you, your luck and real money.

In this bright machine you only expect five spinning drums, on which the long vertical bars show only two kinds of symbols. For the construction of winning chains, 15 cells are also provided here. There are no active lines, and combinations are formed by the Scatter-Pays system. That is, pictures are scatters paid regardless. The bet is accepted for a round. It is from forty coins to ten thousand credits.

Exact limits are found right in the game portal, where you are going to play for money. In the slot machine, there is also many “tasty” things. Here you can play in the risk game for doubling. And a progressive jackpot and free spins with additional prizes are prepared for your win.

Winnings are accrued for 5 to 14 identical symbols that have appeared in any cells on 5 reels. The amount of payment is determined by the general rate and the coefficient from x1 to x100. You can get only one win on the results of the spin.

Doubling round starts only if you wish, when you charge any amount. You will guess the color of the closed card. Choosing the right doubles the payout, and the error means losing the bet. There is a maximum limit that you can learn about from the Info section.

It’s also worth mentioning that in front of you is one of the games with accumulative jackpots. To become an owner of the entire amount collected, it is necessary, while playing for money at the maximum rate, to fill all fifteen cells with watermelons. If the stake is less than the limit, the potential jackpot (about 1 million) is proportionally reduced.

If you are lucky and on the playing field are seven watermelons, then they seem to be “stuck”. But the rest of the pictures will change to new ones for free. When new watermelons appear, one more re-spine is launched. They continue until additional pictures of this type drop out. The size of the stake here remains unchanged until the end of the round.