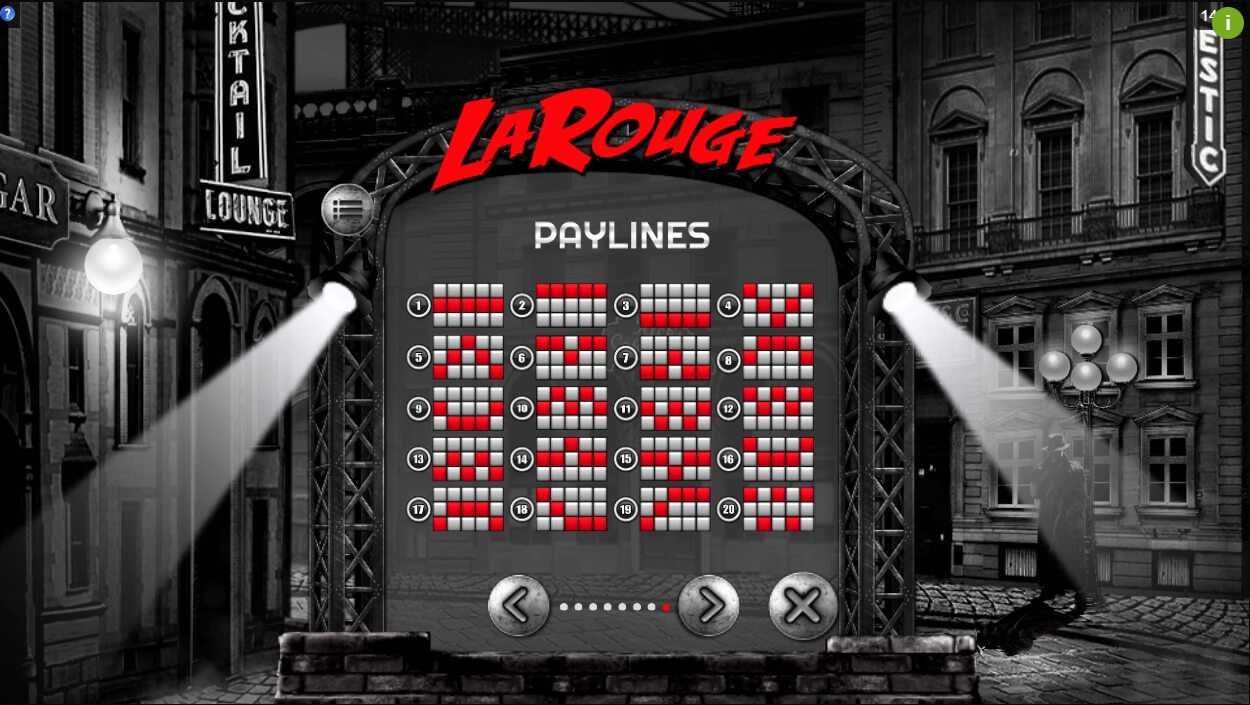 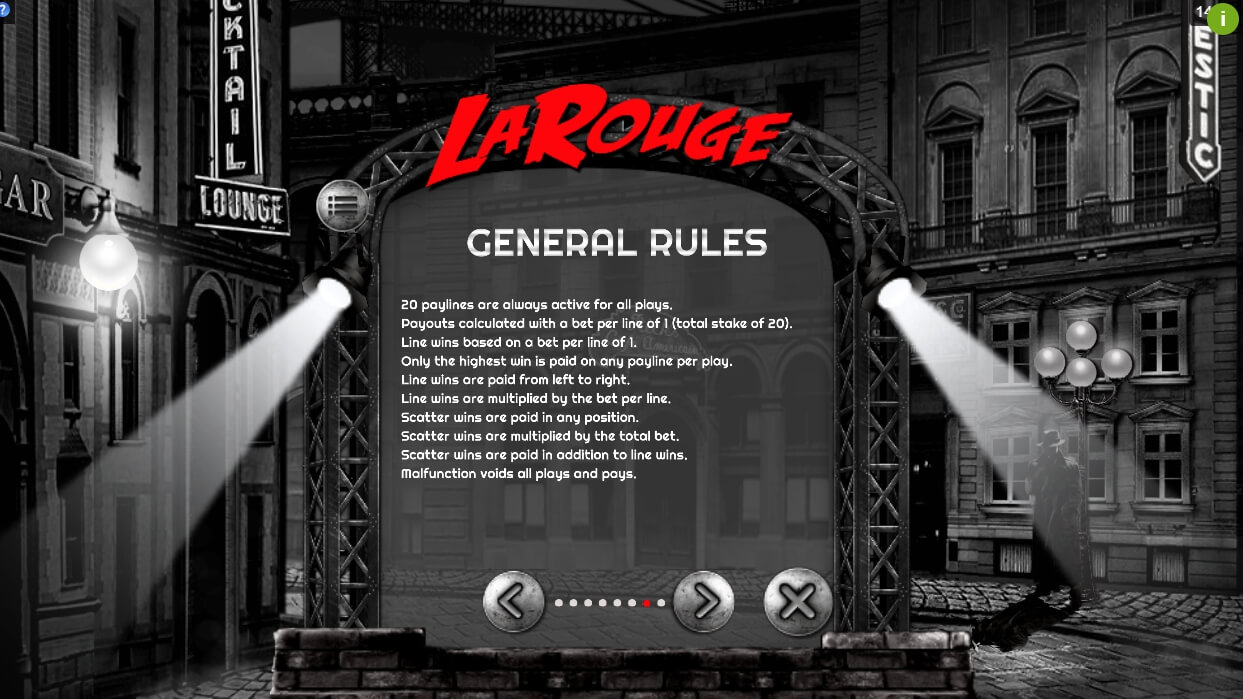 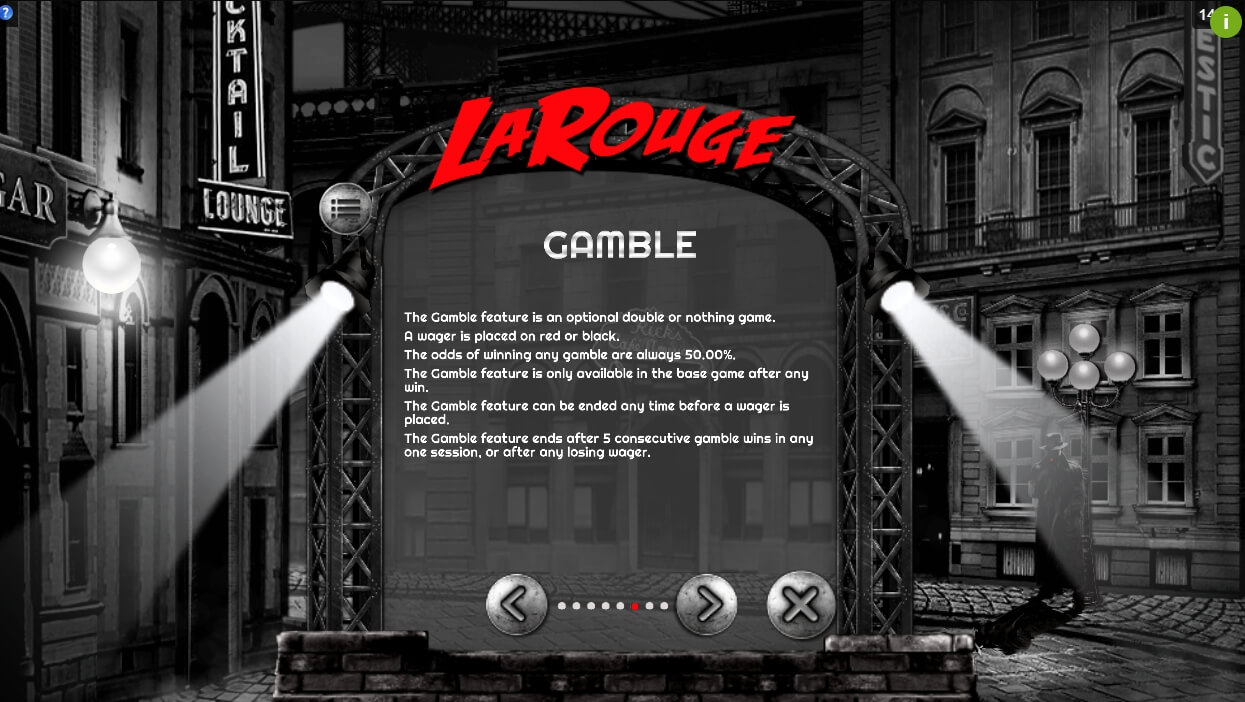 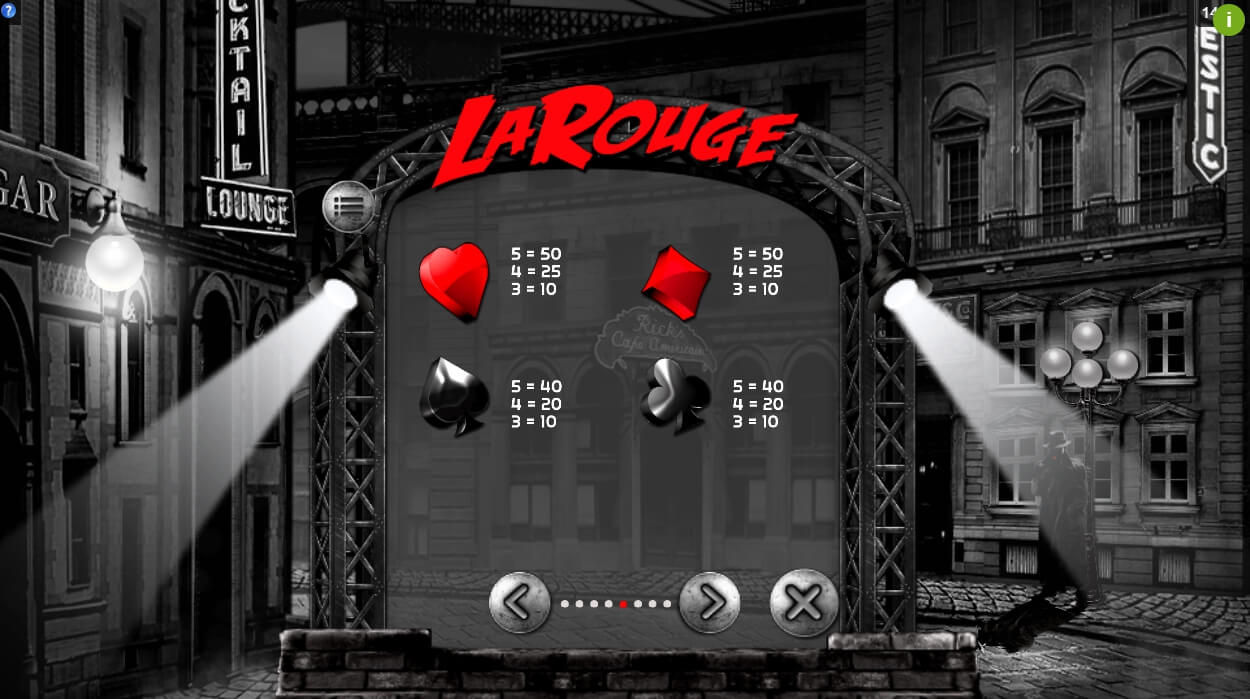 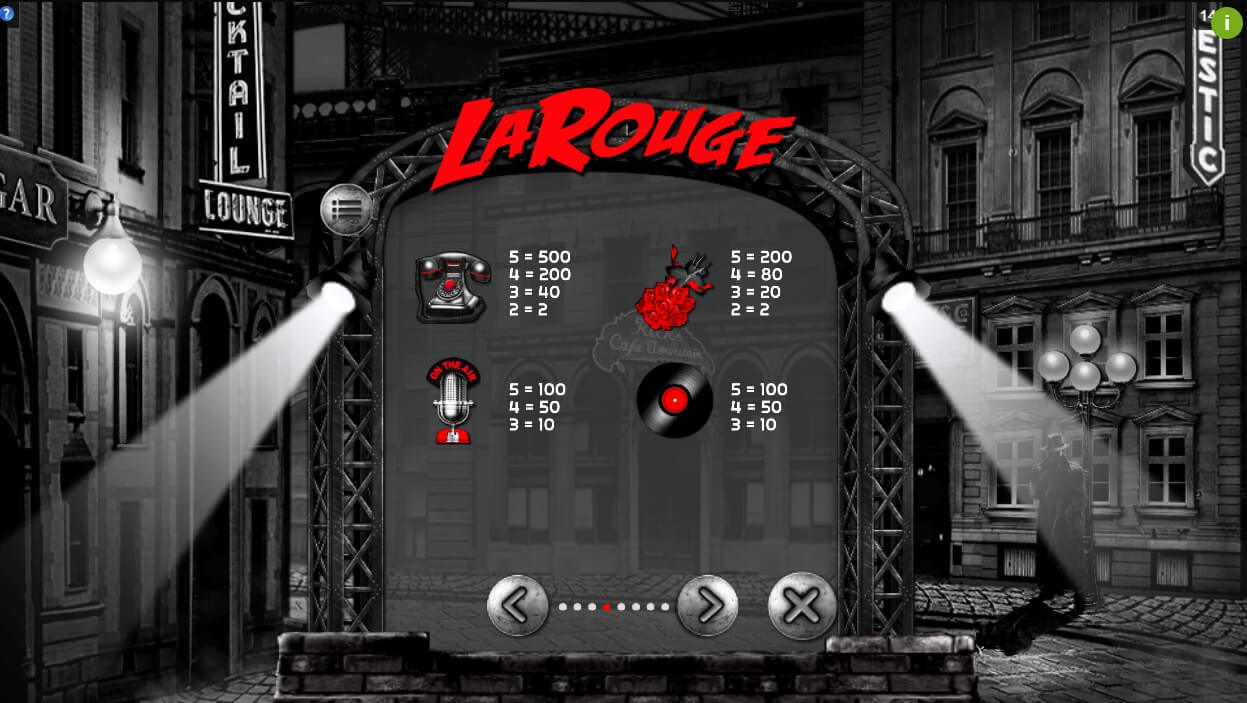 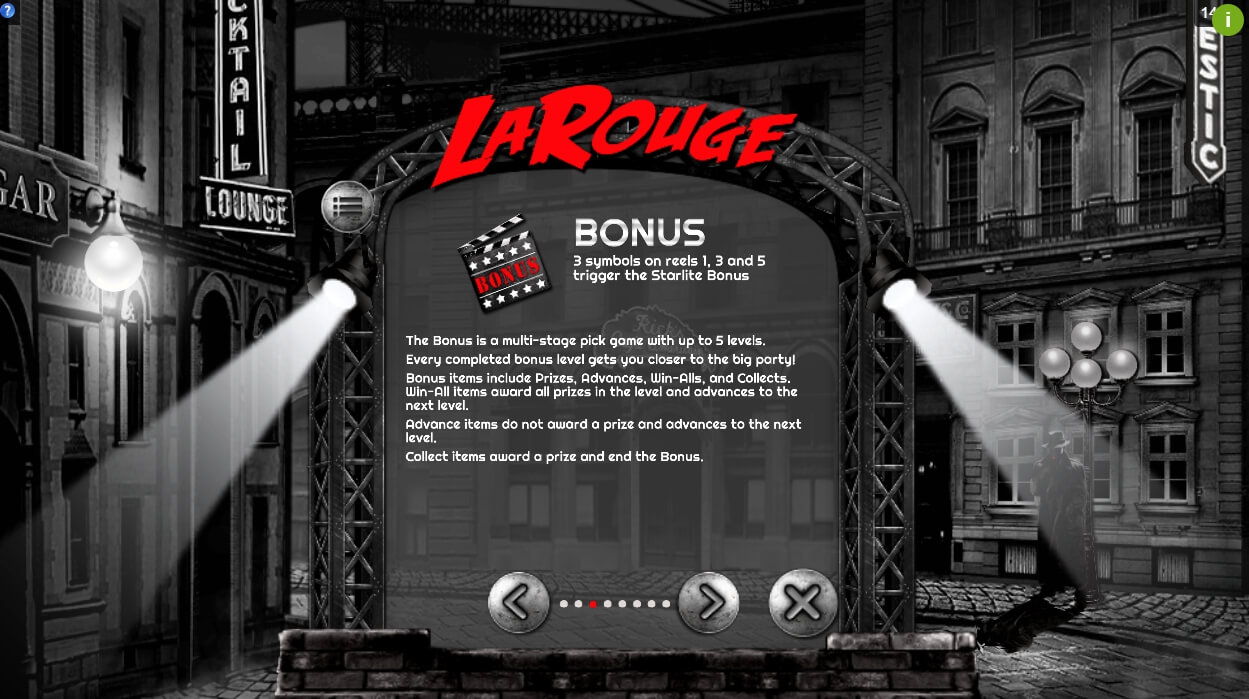 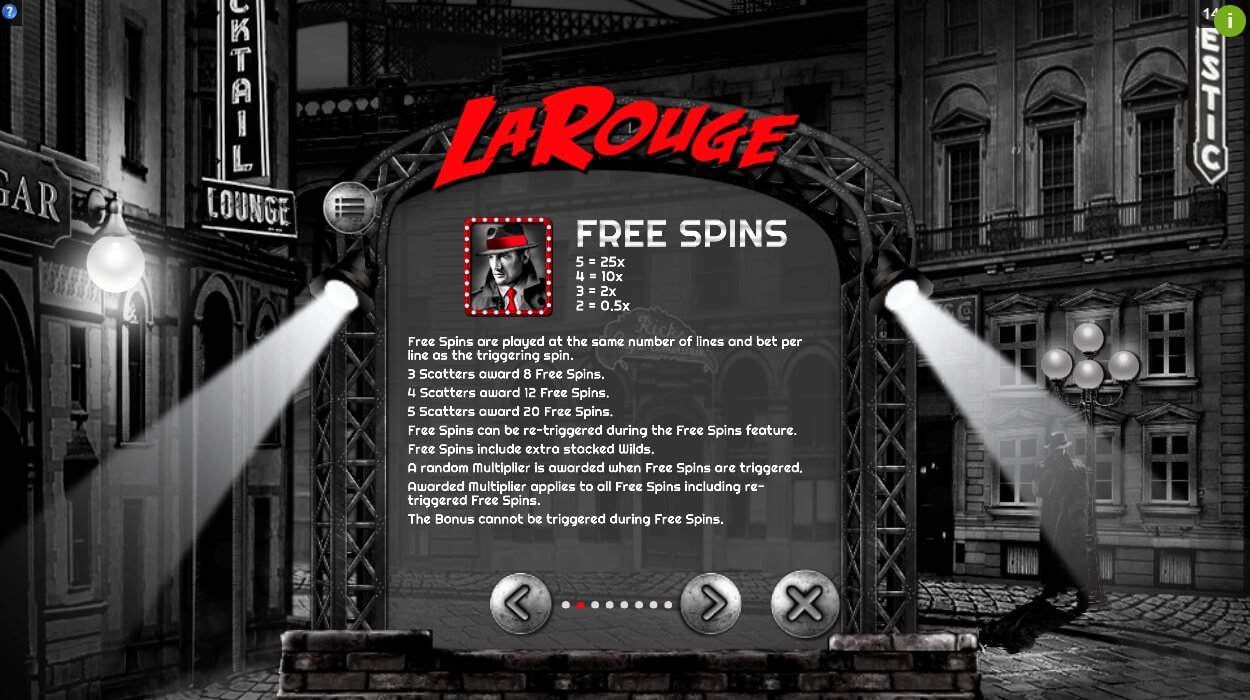 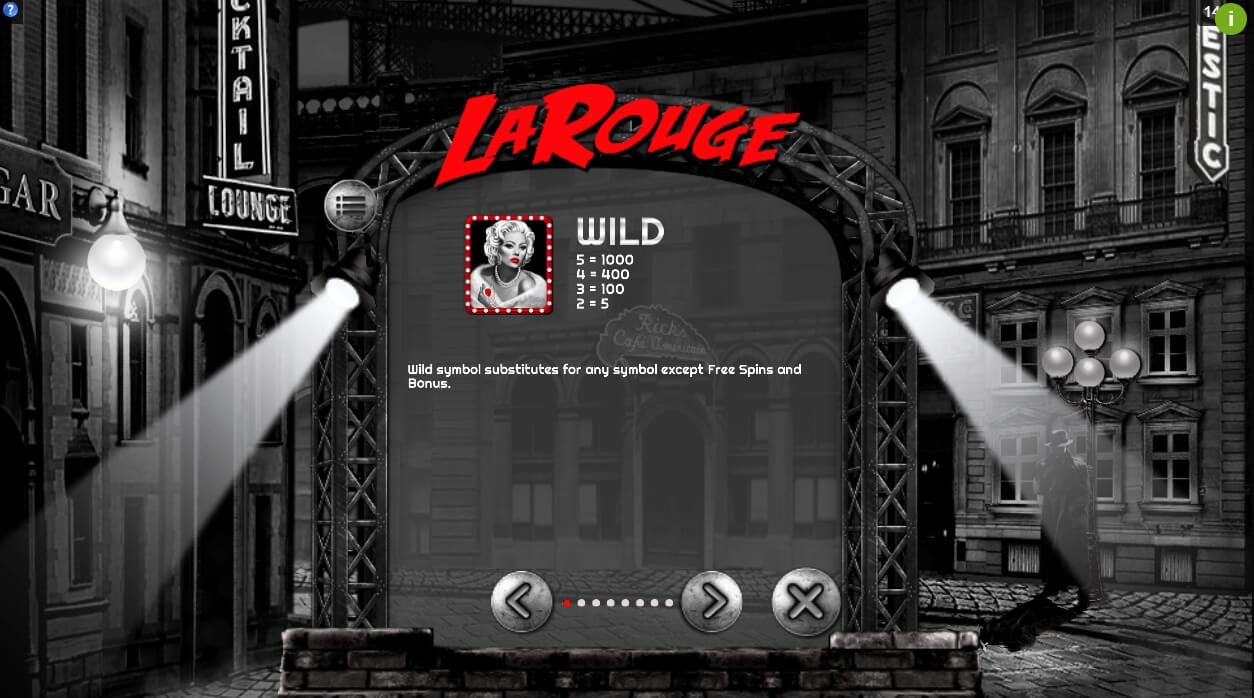 The use of a red element as the only color spot in black and white is not a new technique that was used in various films. Today, such a color solution is often used by photographers and famous designers. Developers from Old Skool Studios also could not resist the temptation to release a video slot with such design. The La Rouge model suggests the cult thriller “City of Sins”, but the theme of this emulator is based on a separate story. It will tell you about the dawn of Hollywood cinema that was presented by many talented actors.

Are you ready to dive into the awesome game? Then run the slot machine that will immerse the user in the atmosphere of the metropolitan streets. Here we can see a lot of back shades. The center is the playing field with 5 reels and 20 winning lines. On the right side, we can see a man standing under a lantern. At the top of the display is a bright car logo, by the way, some game symbols are also made in red. The gameplay is dynamic thanks to the use of 3D graphics and additional animations.

This stunning style is complemented by sound effects. By the way, the latter options can be turned off. Additional settings also offer the choice of graphics quality. It is not difficult to start the game session. The player should first make a bet using the BET button.

The final win also depends on the number of active lines that are controlled by the LINES function. Do not forget to visit the theoretical section that hides information about the rules of the game. In addition, there is the paytable that describes all the functions of the game symbols. The rotation is activated by the round SPIN and AUTOPLAY button.

The second function allows you to take a break and enjoy the stunning atmosphere. There is an additional button on the control panel that flashes after the combination appears. The GAMBLE key opens access to the risk game. Here the participant should guess the color of the playing card. If the user gives the correct answer, the last payout will be doubled.

An actress is the joker that appears on all the reels, where it goes with vertical stripes. The joker replaces simple pictures in chains. Scatter is paid regardless of the location on the playing field. Payments are considered at the general rate. Three similar images activate an additional round that includes free spins.

The participant will receive 8-20 rotations that are carried out at the current rate. In addition to jokers, multipliers that are involved in the calculation of payments are used here. The developers also implemented an additional level. The bonus game consists of five stages. Here you need to choose items, getting different prizes.

To go to the next stage, where winnings are bigger, the player needs to open a special picture. At the last stage, the customer can receive 10 thousand. Each player is guaranteed to win real money.

Other Games by Old Skool Studios