Jack and the Beanstalk Slot Machine 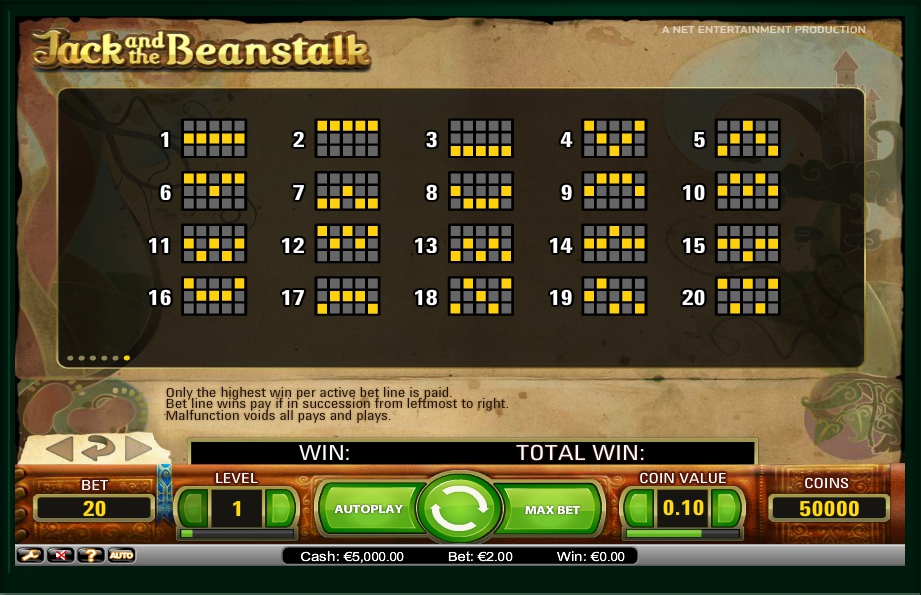 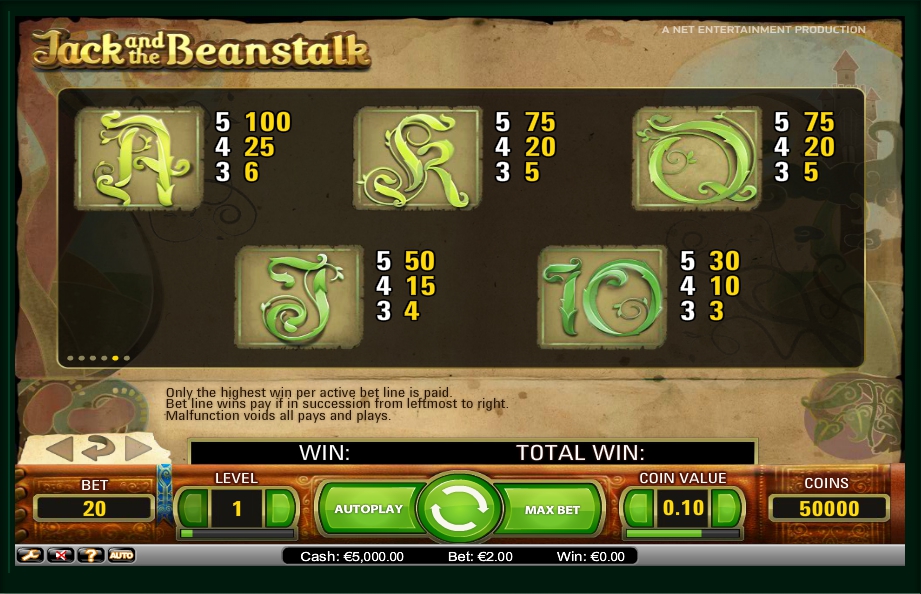 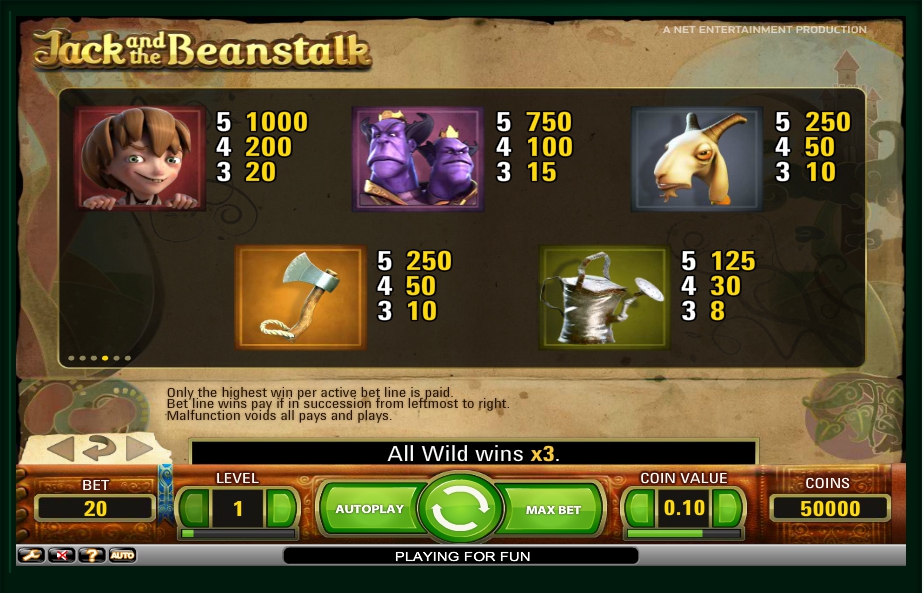 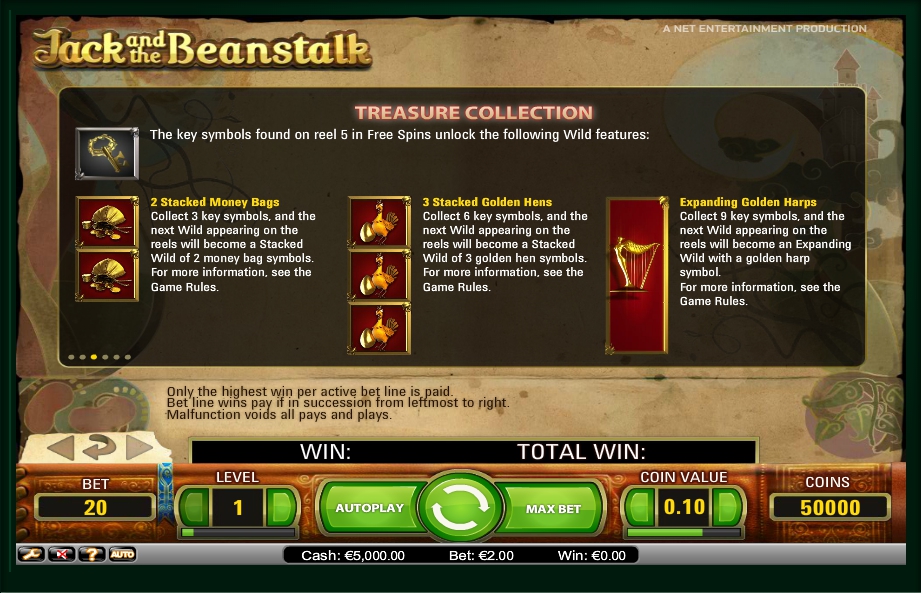 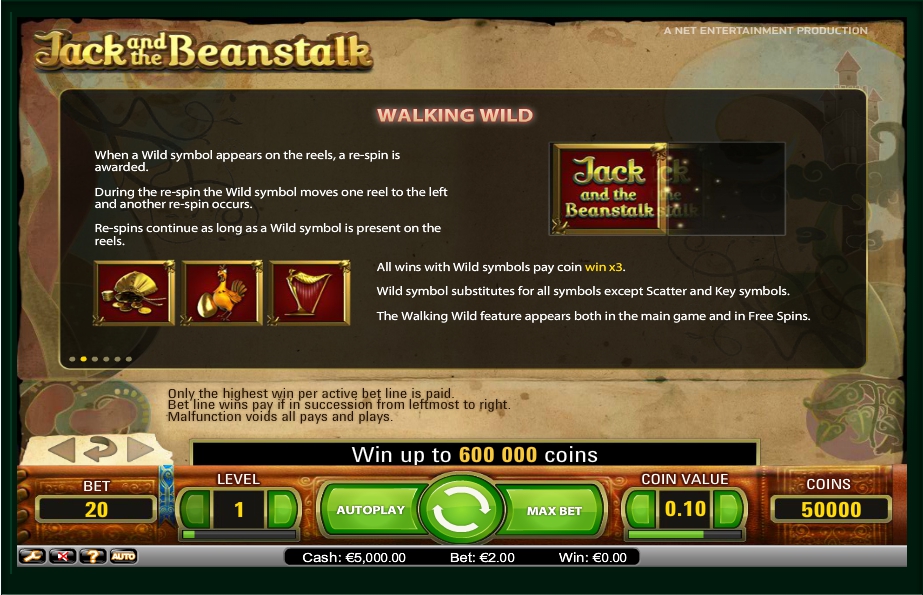 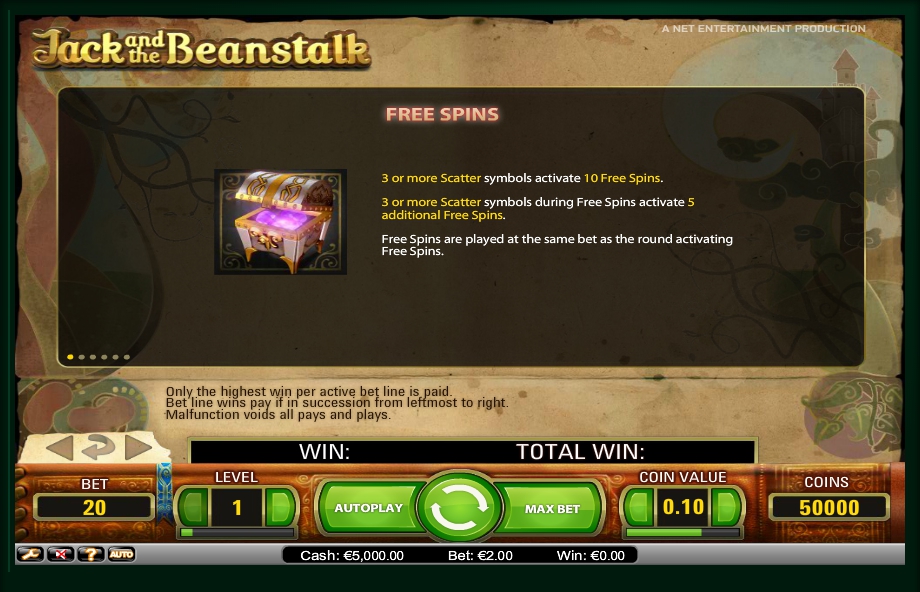 Jack and the Beanstalk Slot Review

Most adults believe that in the real world there is no place for fairy tales, magic and miracles. Developers from the NetEnt decided to disprove this myth and created an amazing slot for the fairy tale Jack and the Beanstalk with truly magical functions. This story is very popular, therefore, a lot of films about Jack and his adventures were filmed.

The videoslot will tell us about a guy who always believed in miracles and went to search for a magical stem. Since childhood Jack has not been like everyone else. At a time when everyone was embroiled in craft, the boy dreamed of something more. Accordingly, he had no friends and he could not live with someone else’s dreams. The goal of the player is to help the boy to cope with all the difficulties and plant a beanstalk, and then everything will be like in a fairy tale. We all know that the stem has grown to the skies, and the reward was an unusual chicken carrying golden eggs.

The design and interface of the game are made in a fairytale style, and the main images will be animated heroes of the same name. The musical design harmoniously combines with the concept of the videoslot and successfully fits into the theme. Jack will also be present at the “playing field” and will always help you with advice. And also, he is ready to pay you 1000 credits for a successful game.

In the best traditions of NetEnt interactive products in the online game is extremely simple and intuitive control, as well as a fixed number of lines. The betting range is quite loyal, in addition, the player can adjust the coin value using the Coin Value and choose one of the suggested 10 bet levels.

A table with payout ratios is hidden in the PayTable menu, and additional information and settings are on the bottom left of the screen. In addition, lovers of excitement and newcomers will be able to use the mode of auto-games through PayTable and quickly set the limit bet with the Max Bet.

The maximum base game hit is just x50 to your stake for five Jacks, although this can be tripled if the winning combination contains a wild symbol, which gives a 3x multiplier to any combination it is contained within. The Wild image is even more important than usual in this game, because every time you hit one you automatically receive a free re-spin and the wild symbol moves one position to the left, and this will continue until there are no wilds visible on the reels, meaning you can get an awful lot of free spins even without hitting three or more scatter symbols.

Another interesting feature will open up to the player in the extra round. In an additional round on the fifth reel there may be gold keys, and based on their number (for the whole round) customer can receive a special reward. 3 keys turn the Wild symbol into a double symbol of a bag of gold, 6 – into a triple golden chicken symbol, 9 – into a golden harp symbol. It’s hard to imagine how much you can win in such an incredible extra round!

Jack and the Beanstalk Slot Symbols