You can not play this game for free
For free slots game go
Play free
or
(2 votes)
Game Played: 0
Full screen: close 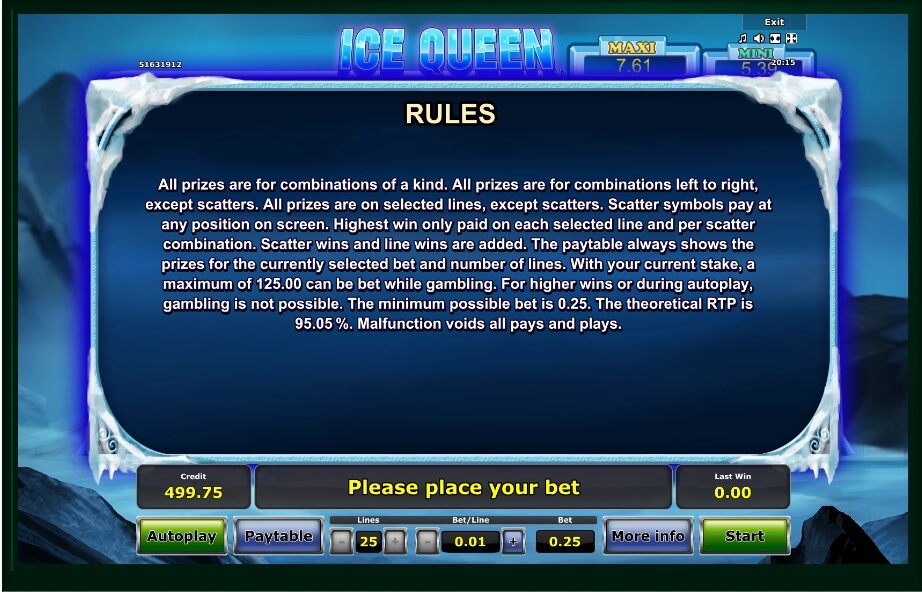 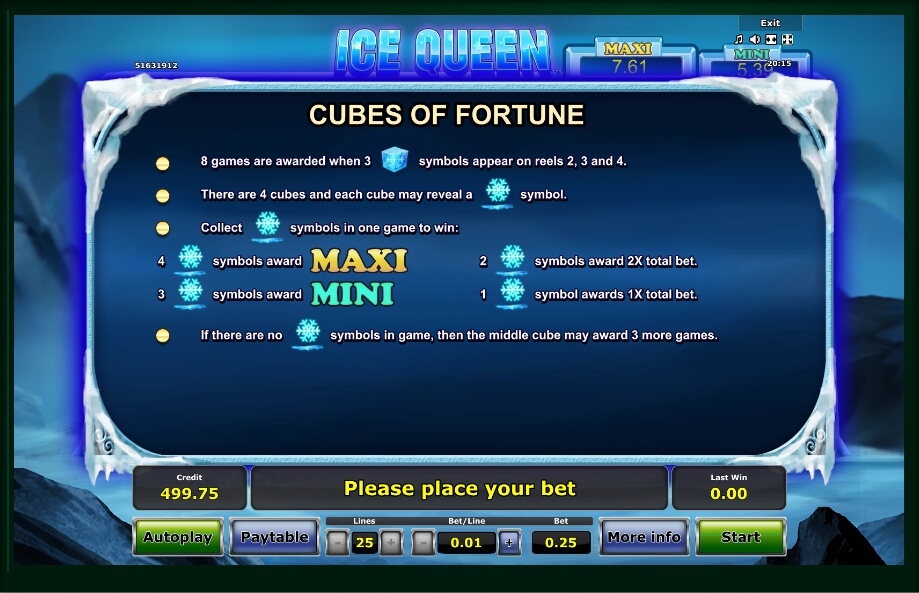 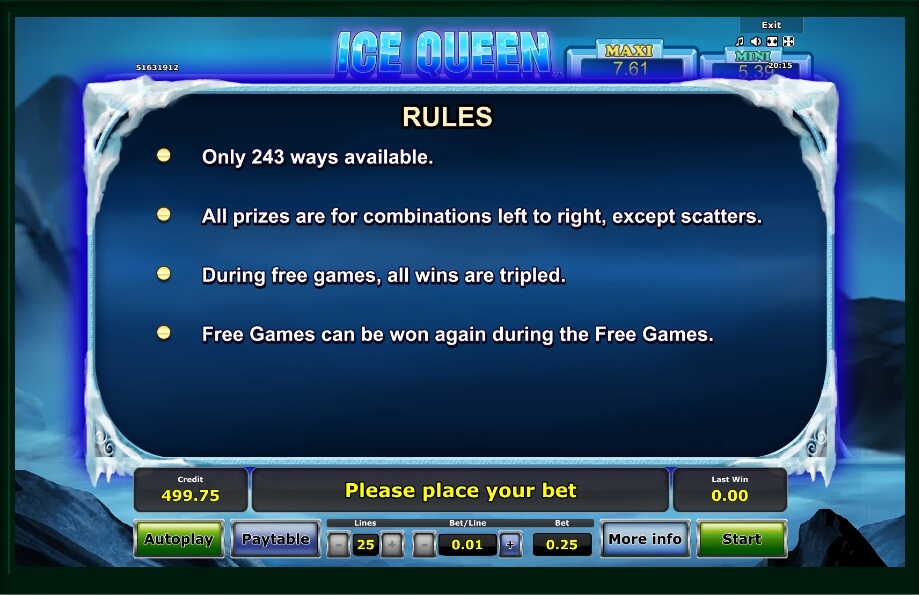 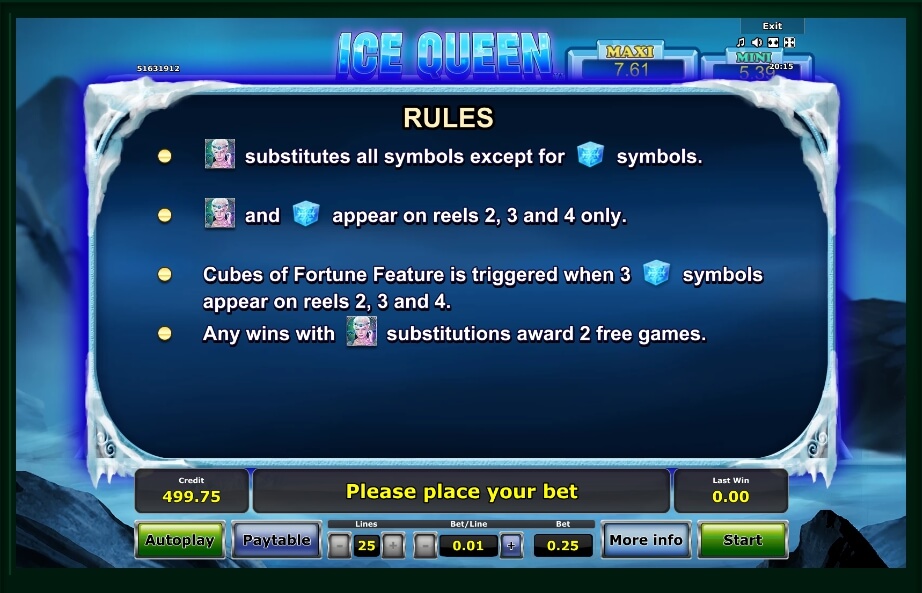 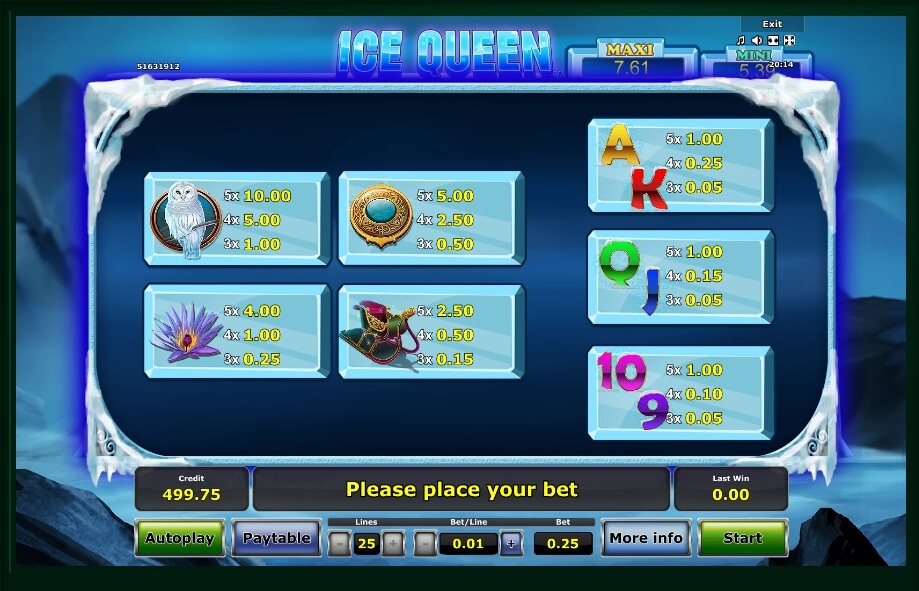 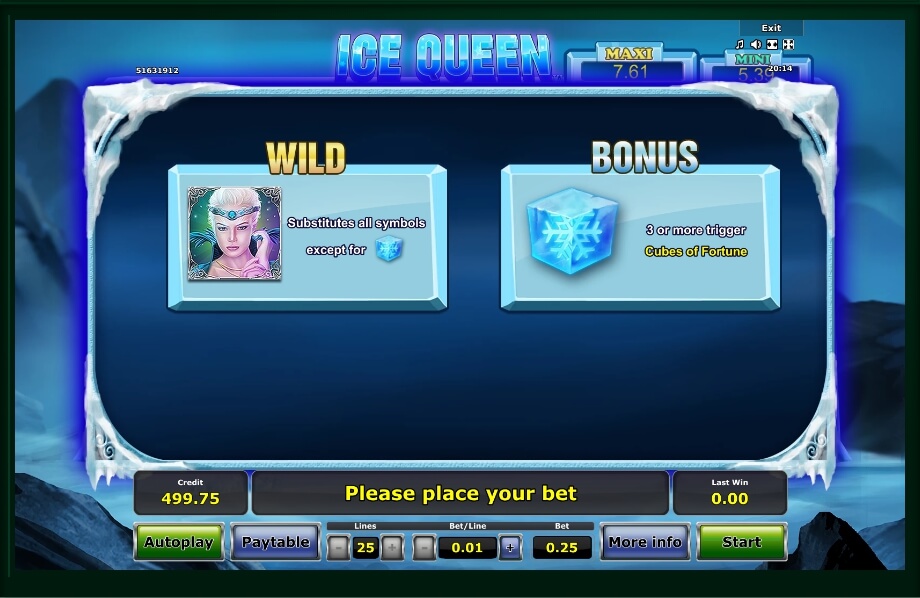 Very often, when developing new products, providers pay attention to fairy tales. This is due to the fact that such slots are very popular, as only they can bring us back to childhood and give positive emotions. Most recently, the fairy tale “Snow Queen” became a basis to a new video slot from the Novomatic Company. “Ice Queen” invites all users to visit the cold place and fight with the main character of the story. Following our advice, the player will receive a large number of prizes and payments. Do not think that everything is easy here, the insidious queen has prepared many tasks…

This gaming machine is more high-quality and modern compared to analogues from other manufacturers. It has a more interesting and well thought-out plot, better graphics and increased payments. In addition, all symbols are very clearly drawn here, and the background is presented in the form of a winter landscape with animated elements.

Against the backdrop of the snowy mountains, the playing field with 5 reels is depicted. There are no standard lines, so combinations are formed in 243 ways. The screen can boast of bright colors, 3D elements and amazing animations.

Before going on the trip, the participant should get familiar with the control panel. It contains only a few buttons that help control the gameplay. To begin with, the user needs to review the PAYTABLE section that stores information about combinations, payouts and basic rules of the game. When potential amounts of payments are known, it is possible to start fixing an optimal rate (from 0.01 to 2 credits).

This action is performed by pressing special +/- knobs next to the BET / LINE button. Having familiarized with all the functions of the control panel, the user can start rotating using START or AUTOPLAY. All indicators will be displayed in their windows. You can also use advanced settings at any time.

Since the snow queen is the main character of the game, she performs the functions of a joker. This means that this character is able to replace standard pictures in chains. If this happens, then the user will receive two re-spins. A bonus can appear on several reels and activate bonus rounds.

After that, you can take part in a round of 8 free spins, during which the bet is made by an online casino. All payments are tripled here. In addition, it is worth noting that during this round will be accumulated snowflakes, for which additional prizes and a jackpot (84,000) will be calculated.

For players who like risk, there is an additional round. When the GAMBLE button lights up, click on it and take part in the risk game, during which the last payout can be increased. Here, the player only needs to correctly indicate the color of the card.