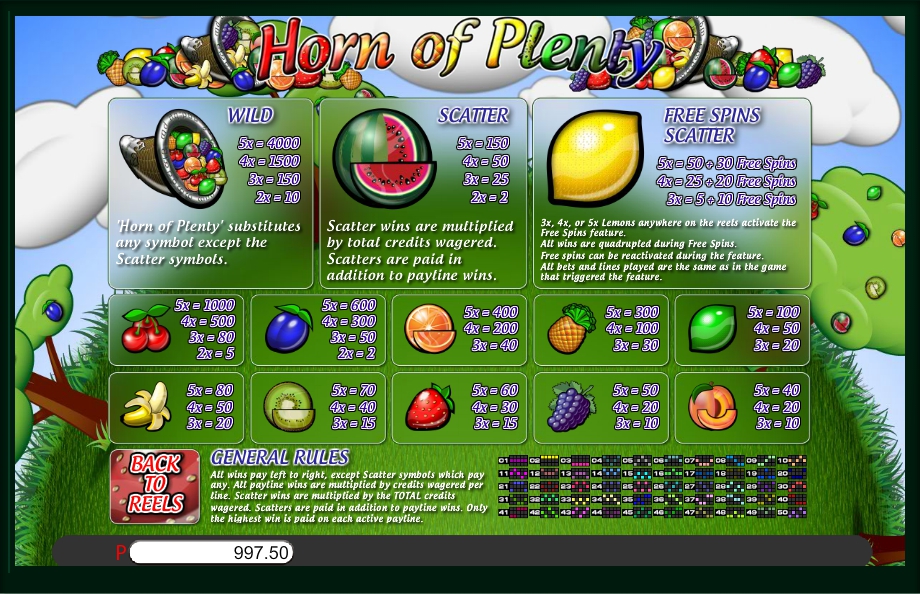 We all know the company–manufacturer BetOnSoft that was famous for its slot–machines even in times of real casinos, and now the company has moved to a qualitatively new level, the Internet. The gaming machine, called Horn Of Plenty, belongs to the genre of videoslots about fruits, because virtually all images are represented in the form of fruits and berries. We will return to the mappings a little later, and now let’s consider the design of the online machine in more detail.

At start five reels are opened, each of which contains three icons. The game is pretty cute, each character is placed on a square with a homogeneous fill of white. Behind the coils there is a green lawn and a blue sky, which does not detract from the game, and even on the contrary, it helps to concentrate completely on the symbols. With the background, the game emblem, located at the top of your screen, also perfectly matches.

After selecting the game mode, five reels, control buttons and several fields for entering values ​​appear in front of your eyes. The game is played according to the standard rules for slots: the winning combination is considered to consist of at least three identical elements that must be within the same active line.

At the maximum values, everyone will have an opportunity to get a grand prize of 4 thousand coins. To adjust the size of the bet and the number of lines, click on the – and + buttons of the corresponding fields. The bet on the line is displayed in the Lines field, and the final bet on all reels in the Bet field. Now it remains to start the coils by clicking Start.

To simplify the game there is a function Autostart, which allows you to specify a certain number of turns, which will be done without your participation (up to fifty pieces). At any time, you can stop the Auto-play by clicking the Stop button. You can see all the rules of the game, as well as the payout table by clicking on the PayTable button.

This product is a 50-payline slot but honestly it can’t be felt while playing that it would mean any advantage. In the Horn of Plenty, the Wild has just the functionality to be the best paying image of the game and can reward players up to 4000 times of line bet but when it substitutes for other symbols a multiplying plus ability is not assigned to it.

5 Melons which are the Scatters here pay 150 times of total bet if the reels contain 5 of them regardless the positions. The free spin feature has its own Scatter in the guise of Lemon which can award 10, 20 or 30 free spin and the good news is all wins there are quadrupled, and the feature itself can be re-triggered during free games.

Generally, it’s not an ordinary online–game from the payout standpoint. It has its rewarding system and the occurring winning combinations sometimes give back that much money that a player could be totally satisfied with.