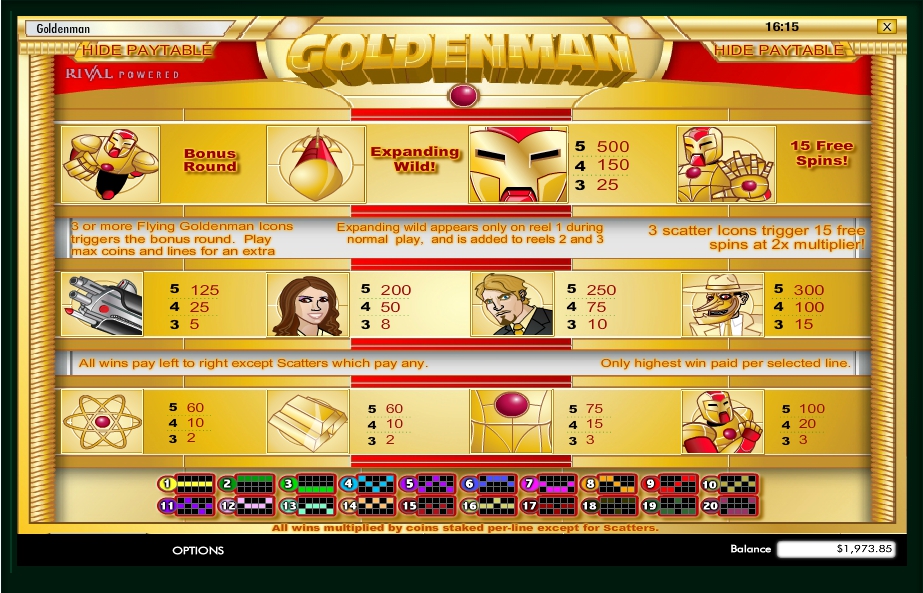 Programmers who work in the company Rival restlessly continue to please their loyal gamers and simply admirers of selected graphic novels by embodying on the screens of slot machines of your favorite comic book heroes. Perhaps, one of the most famous such examples is a video slot called Goldenman, but we also can safely call it “Ironman 2.0”.

The inventor and philanthropist Tony Stark, reincarnated as Iron Man, is heard by adults and children: this talented superhero struggles not only with extraterrestrials and crime, but also solves the global problems of mankind. Many years of experience in this field has shown that it is these slot machines that are used in the virtual space for special demand. Already familiar to us heroes and favorite stories come alive again on the game board of video slots, helping us to earn quickly, easily and with interest.

The video is designed in an interesting and somewhat unusual style, graphics and animation deserve a special praise. Millionaire Tony Stark gives superpowers his iron suit, which resembles an exoskeleton. The outfit not only increases the armor and gives the possessor superhuman opportunities, but also is equipped with a weapon: in boots and gloves there is a jet engine through which an Iron man can fly. As for the apparatus itself, in it, according to the name, “golden” colors predominate.

The online game is represented by 5 reels and twenty paylines. “By tradition,” the controls are under the drums. The most important of them is select coins, with which the user will put his bet. Nearby is the button – select lines, with which clients select the number of active lines. Now, the last step is to press the spin button. Well, if you just want to enjoy the game, then use the autospin button. Despite the small jackpot (750 coins), the online slot will give you unforgettable emotions and impressions!

We have to collect at least 3 GoldHand characters during normal game mode to get entry to feature where 15 free games are waiting for us. Each wins there are counted by x 2 but luckily the Wild also joins the party with the extended function and here it is not just on the first reel appears but also can do the same at the first three reels.

The other side of the game is the Golden Money game where you have to shoot down. If the triggering spin was played with maximum lines and bets, we have 4 attempts to destroy the enemy. It could be a little bit more exciting and you can not take part in it more than 25 times x of the total bet award.

One Million Reels BC