You can not play this game for free
For free slots game go
Play free
or
(21 votes)
Game Played: 9
Full screen: close 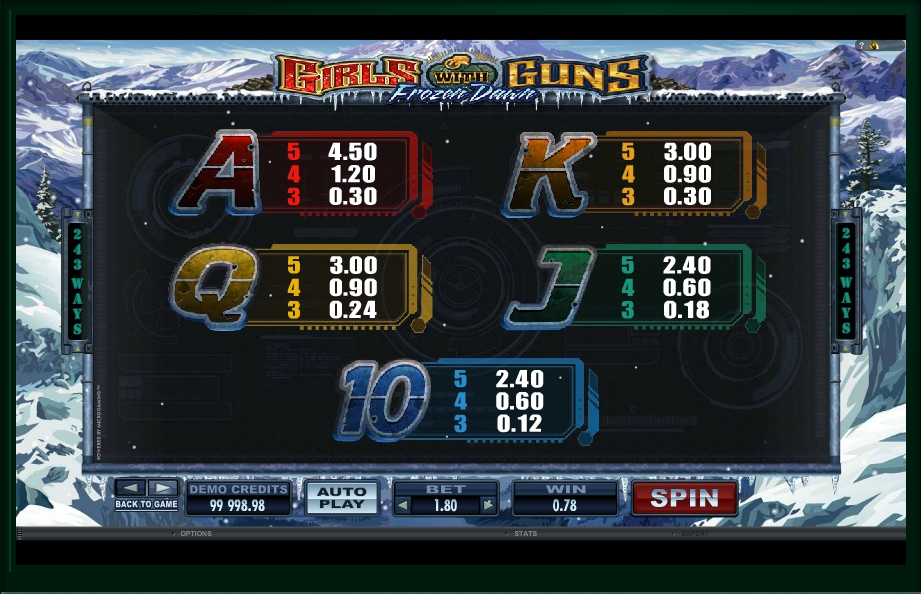 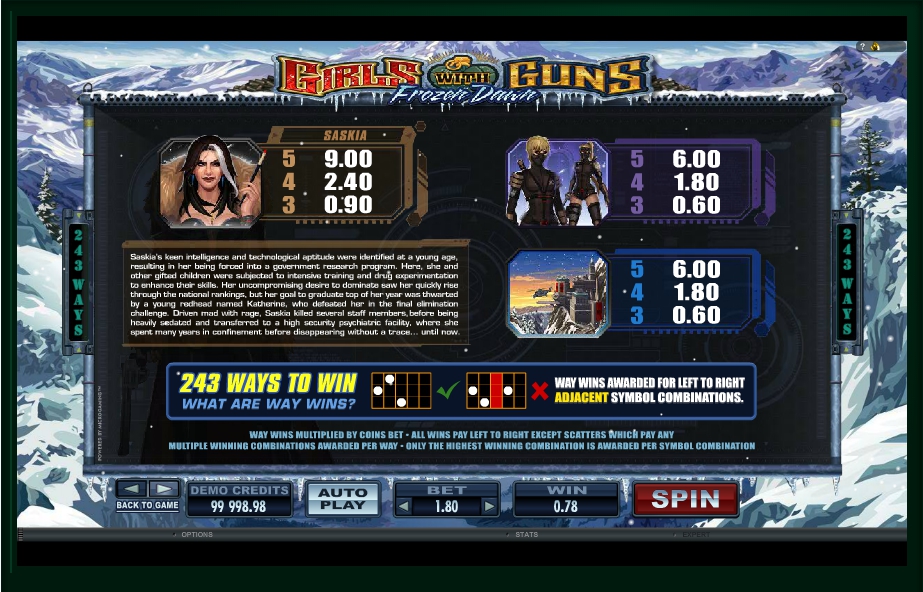 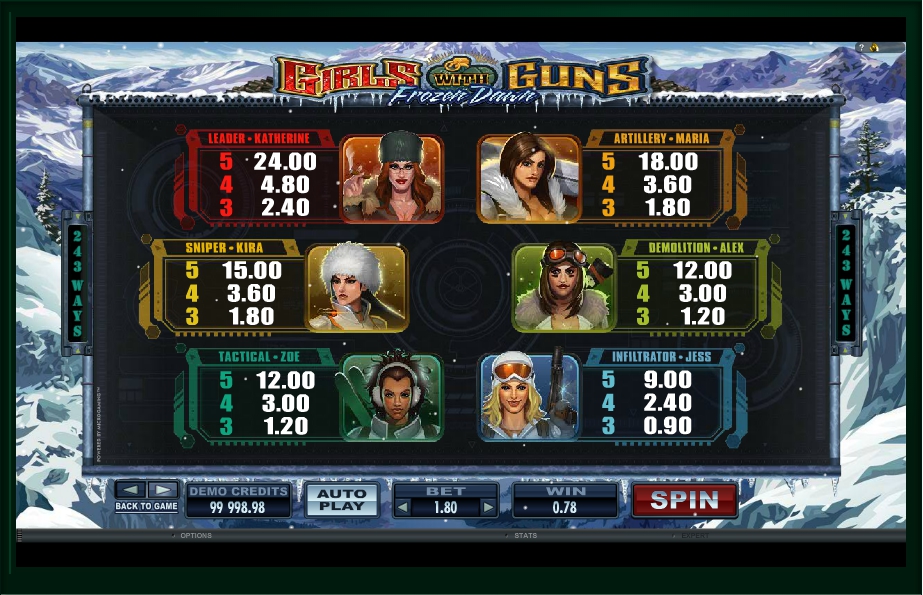 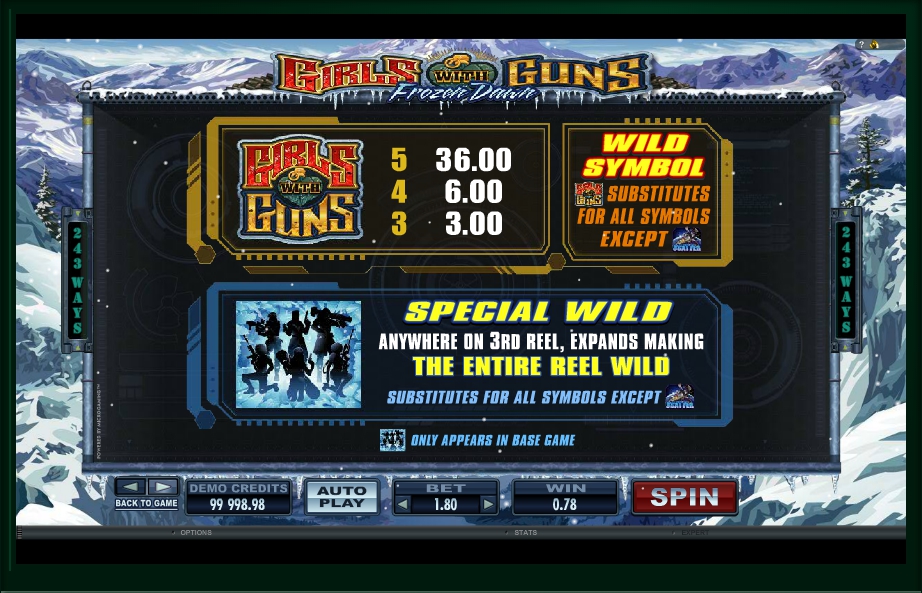 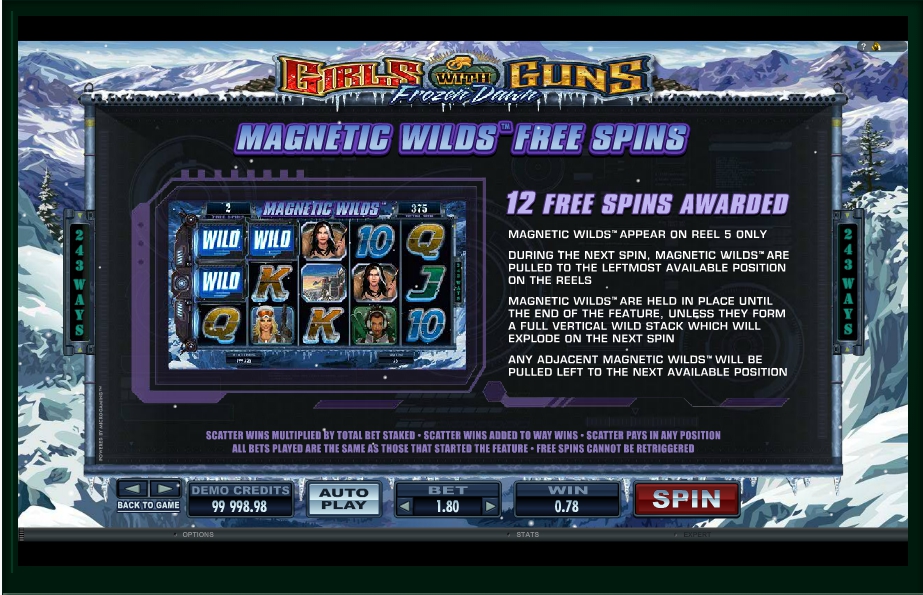 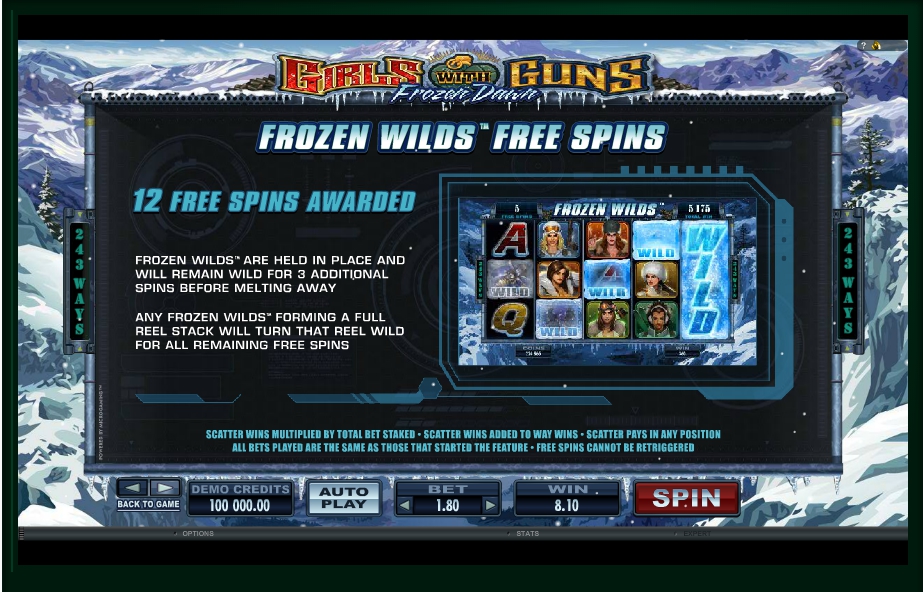 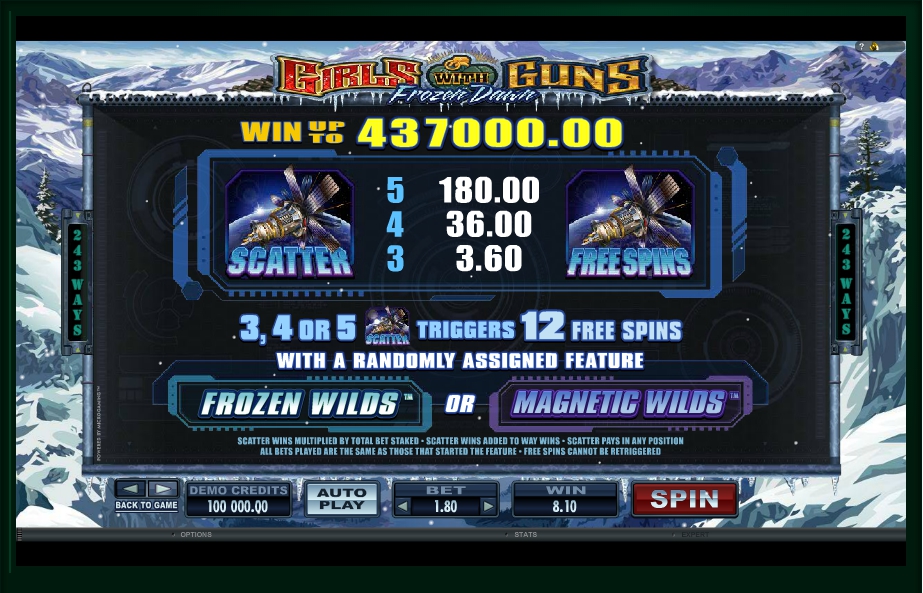 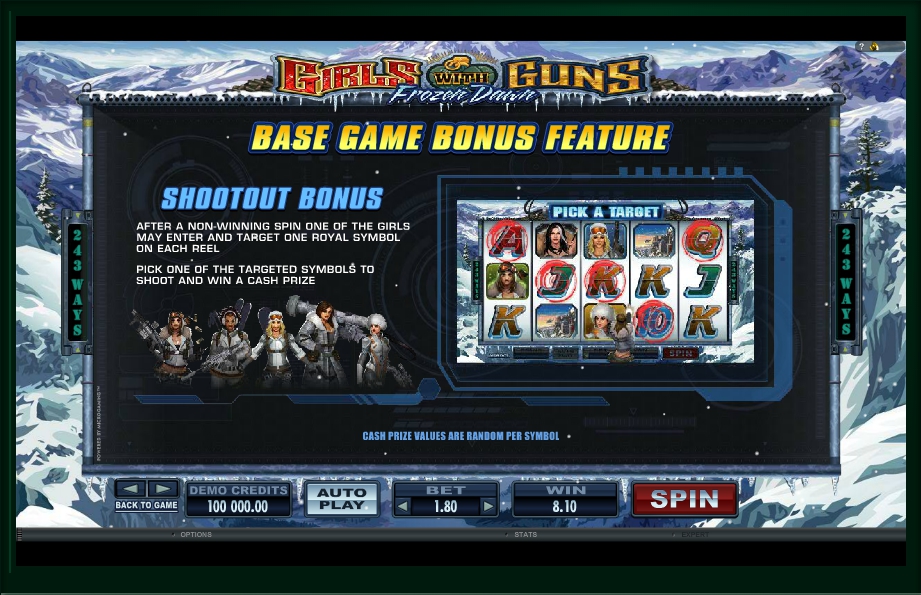 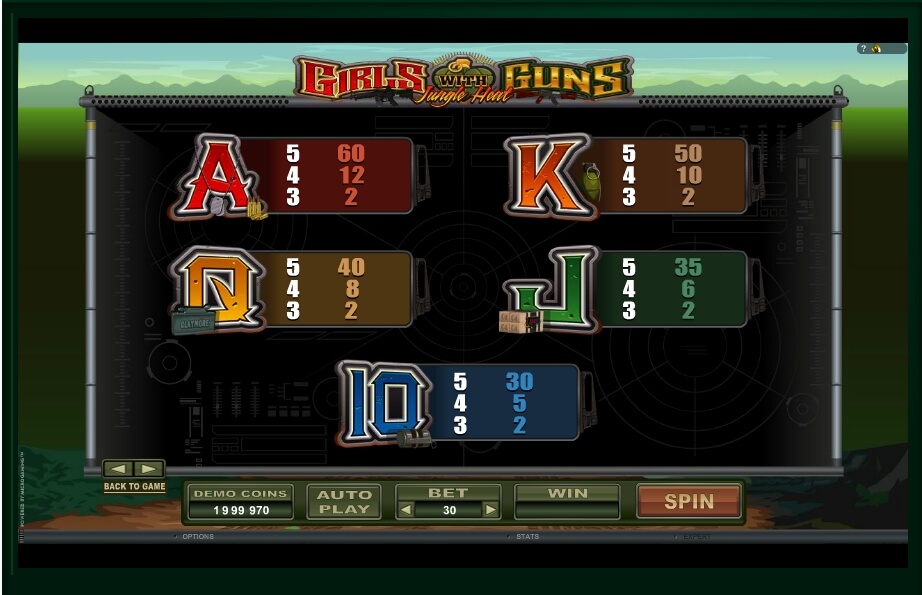 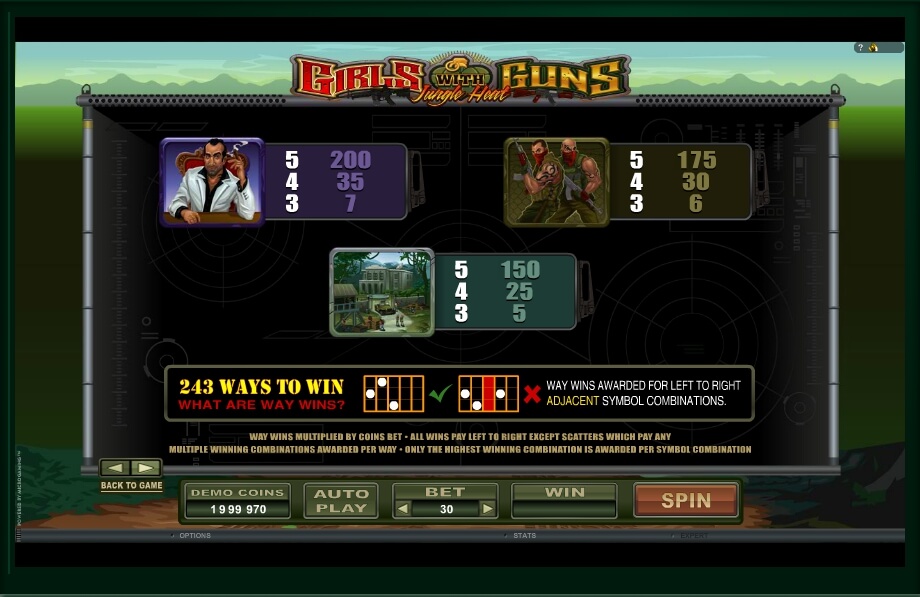 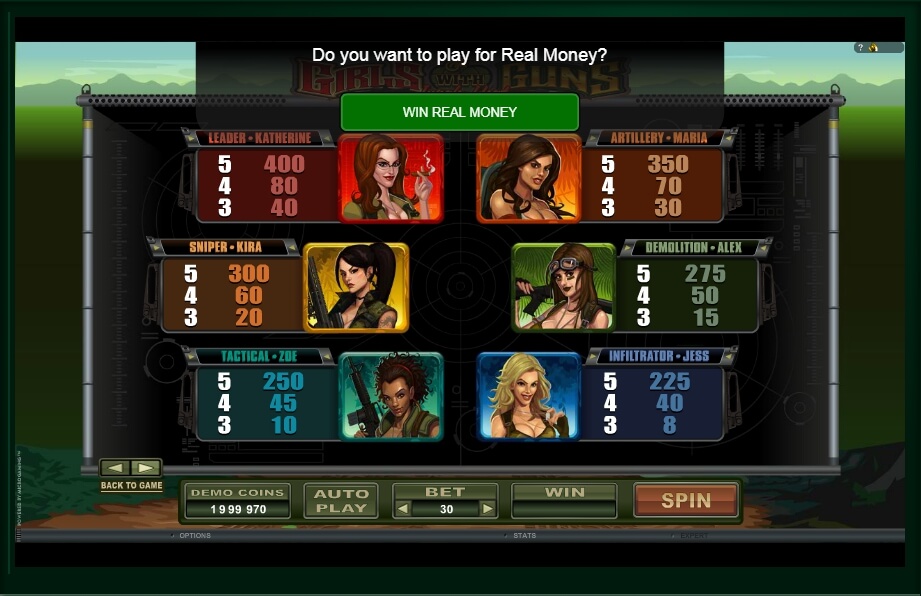 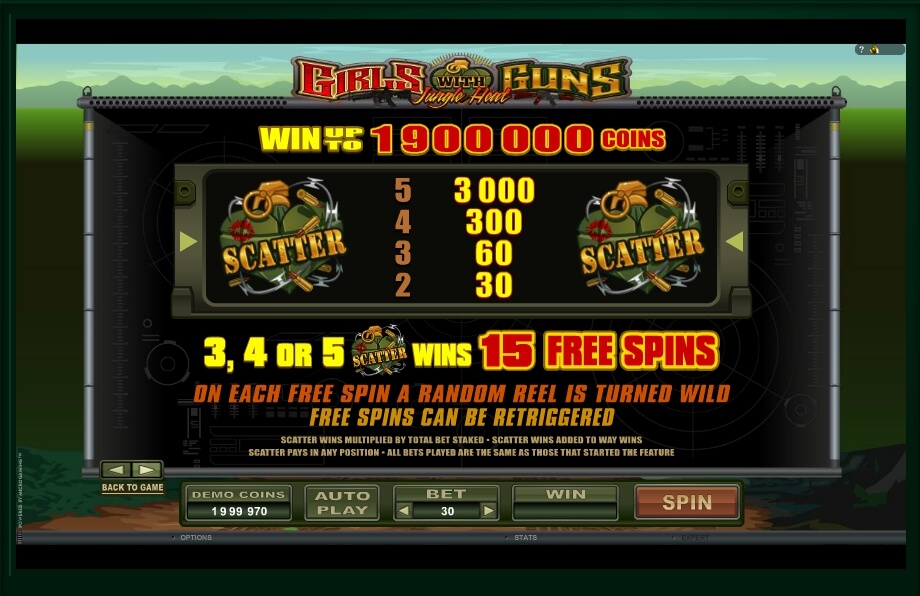 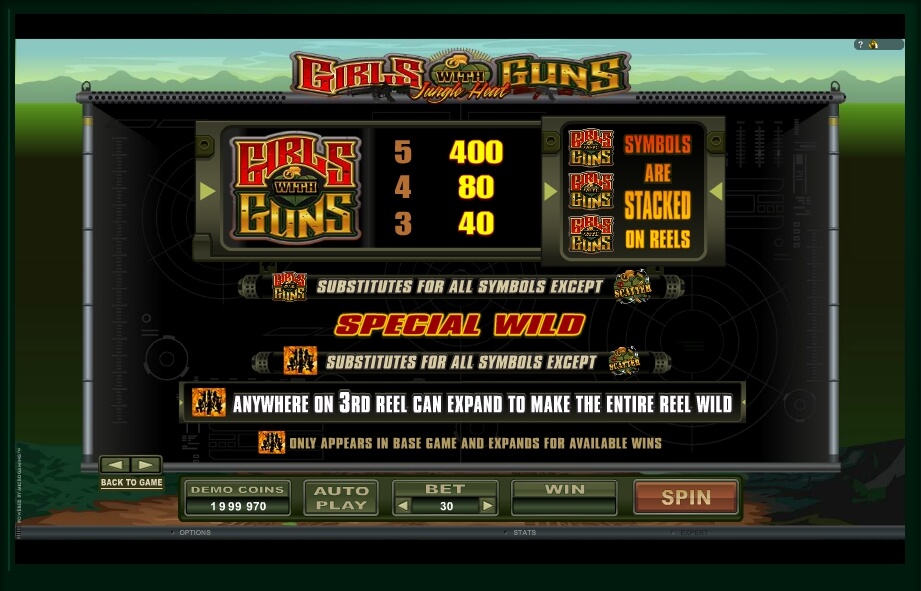 The second part of the story about the elusive bandits – heroines of the Girls with Guns gaming machine from the Microgaming – unfolds around the snowy expanses of the Russian tundra, among the permafrost and the continuing wind. And again you have to use all your available arsenal of weapons to capture the fateful beauties and gain control over their secret lair. Here you can play Girls with Guns: Frozen Dawn in free mode, and if you want to hunt not only for ladies but for the jackpot – then choose the Microgaming casino that is convenient for you and start playing now.

Unlike other typical representatives of military slot machine, the Girls with Guns: Frozen Dawn casino slot offers the player to become a real secret agent in order to disarm the gang of dangerous ladies. The manufacturer has equipped it with standard 5 reels and 243 possible winning combos. On one line you can put from one to fifteen coins, with a value from 1 to 20 cents. At the same time, the jackpot in the game is impressive and is equal to 9000 gaming credits, which is totally a high-roller’s paradise!

The control buttons are located at the bottom of the screen and do not need a detailed description:

Gaming Symbols of the Girls with Guns: Frozen Dawn slot

Gaming Symbols of the Girls with Guns: Frozen Dawn gaming machine are simple yet stylish: these are images of the charming bandits themselves, their weapons, ammunition, and artillery, as well as military landscapes. The game also has standard card symbols from 10 to ace, which can also add several coins to your game balance. In addition, the Girls with Guns: Frozen Dawn slot machine offers players some special characters to increase their chances of winning the big lump of coins:

he gameplay is quite simple and even a newbie will quickly get used to it.