Gems of the Night Slot Machine

You can not play this game for free
For free slots game go
Play free
or
(23 votes)
Game Played: 14
Full screen: close 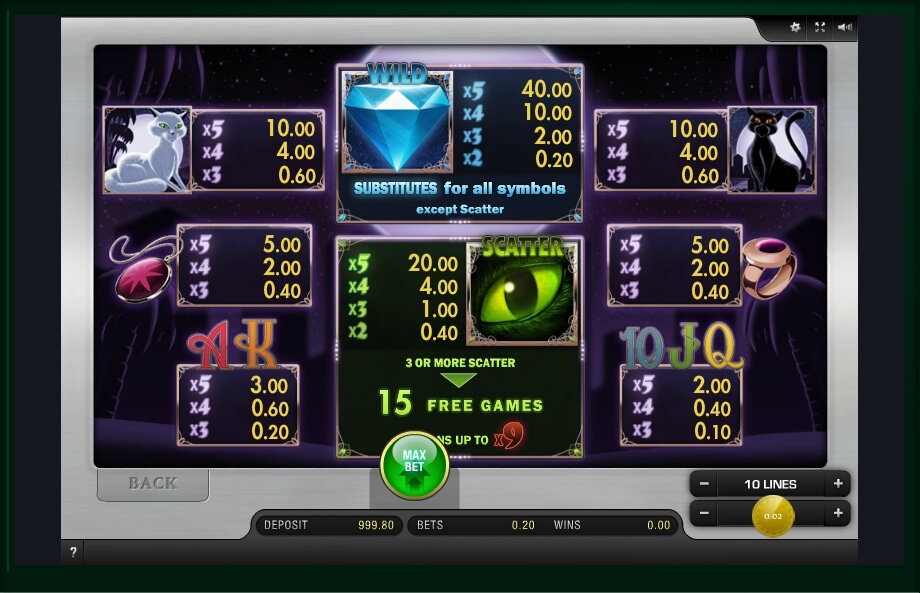 Gems of the Night Slot Review

Night is not only time for sleep. Night is the right time for walking and romance. Two cats have a romantic date this night. However, these are unusual pets because they hide precious stones in their collars. The stunning brilliance of diamonds attracts the attention of even animals. People also often succumb to this temptation. The young team of the Merkur company helped users to feel luxury in a new video slot called Gems of the Night. During the game, each player will be able to admire these beautiful diamonds as well as the plot of the slot.

Despite the fact that the gaming machine is mainly decorated in dark colors, all the characters look bright and realistic. In general, each detail emphasizes a unique and romantic plot. Against the background of the large and bright moon, two cats in love meet. Night is the best time for them, as they have an opportunity to escape from home and be alone. The game even has an appropriate soundtrack. On the background of the night city, there are 10 lines on 5 reels. Note that the game board is marked with cells that correspond to all paylines. Above is a beautiful logo of the game with a large diamond. This detail also emphasizes the style of the online game.

You probably know that before each game, you need to get acquainted with the peculiarities of the video slot. For this purpose, the “paytable” section hides information about combinations and payments. Having studied this section, the participant should make a bet using the regulators of the “bet” function. Nearby you will find a function that determines the number of active lines on which paid combinations will appear. All the above listed indicators will be displayed in the corresponding windows.

Two large buttons activate two rotation modes (automatic and normal). Now, when the preparation is over, the player needs to wait for the appearance of prize chains. Fortunately, the slot machine does not have complicated functions and extra buttons.

Of course, the video slot has many advantages that distinguish it among modern analogues. However, the developers do not offer bonus rounds or special symbols. To get paid, the player needs to catch several identical images. After that, the winning line will light up and two additional buttons will appear on the screen. A bag of money suggests picking up a payout. The second button suggests taking part in a risk game, during which you can double the payout.

According to the rules, the participant needs to guess the color of the last card that appears on the screen. If you give the right answer, then a double amount will be credited to the balance. This is a game of risk because the prize can also be canceled. In addition, you can choose ladder risk-round where you will have to get the highest pays. The main prize is 50 thousands.