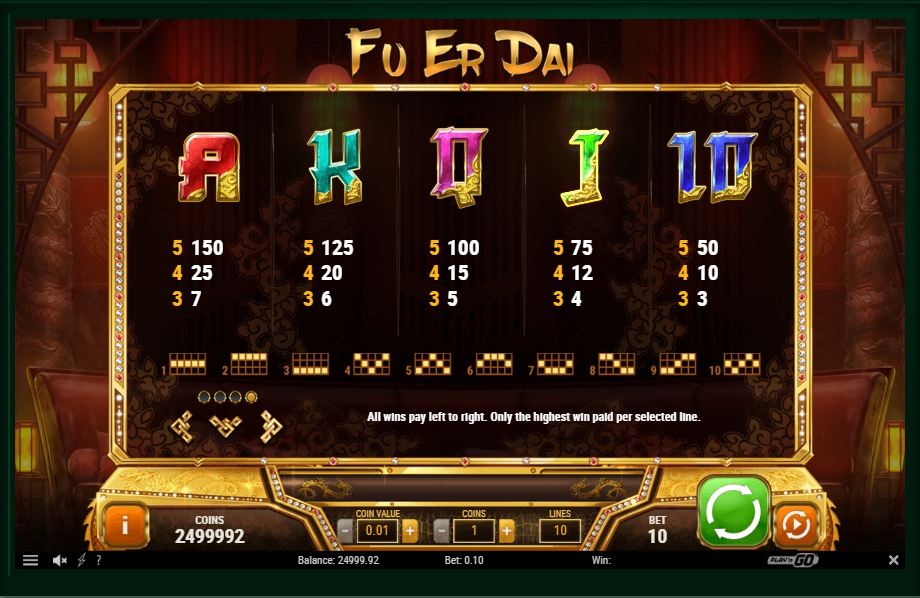 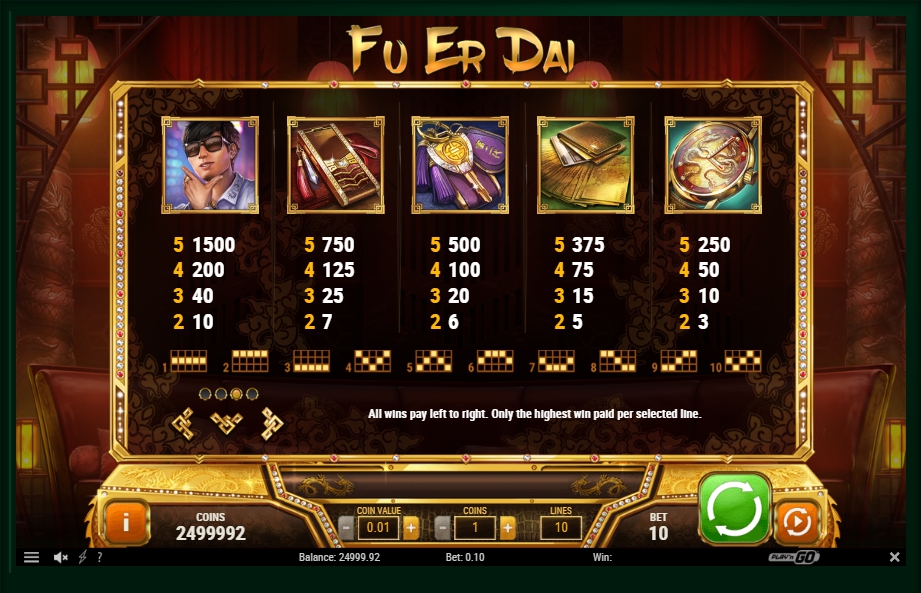 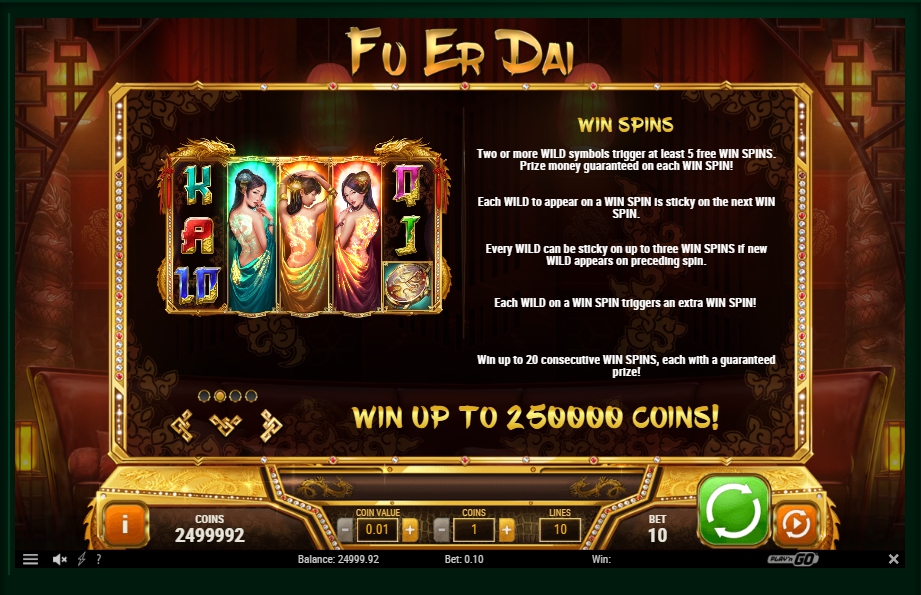 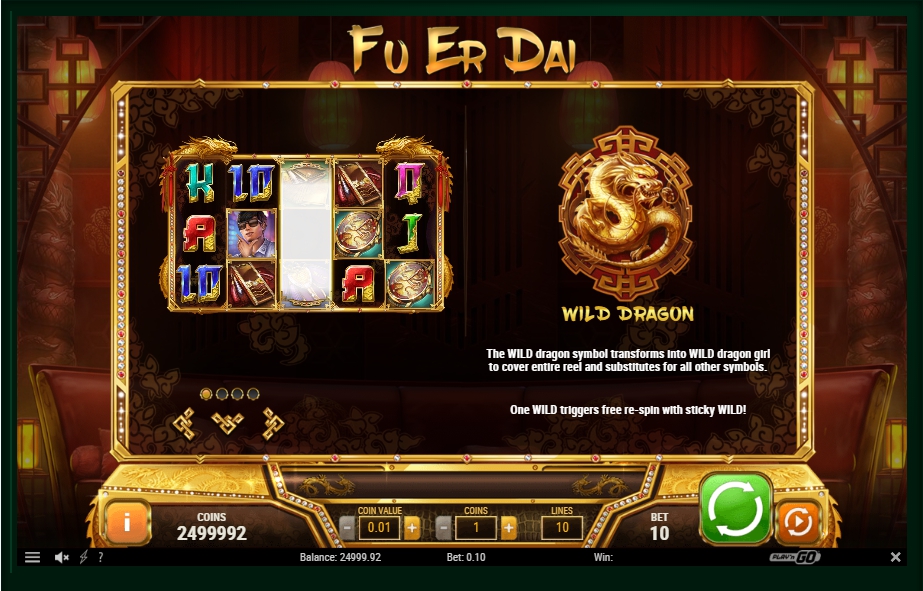 It is known that in any society there is a certain interlayer of the population which in the people is called golden kids – it is young people – young men and girls, children of rich parents who idly spend time, having a good time. To the golden kids who live in China devoted the unusual and interesting game machine Fu Er Dai of production of the Play’n GO company.

And attributes of such carefree life are figured on characters of the fascinating gambling machine Fu Er Dai. On reels of the slot machine packs of banknotes and bank credit cards, fabulously expensive watch, keys from the super fashionable car, the gold mobile phone flicker. All these status things will bring to the user excellent prizes if settle down on a game field according to rules.

The high character is a portrait of the representative of the younger generation of rich men. Has the leading role in a game original Wild with additional functions on which the medallion with a figure of the dragon brings to the owner, according to the Chinese mythology, good luck and welfare is initially figured. Also players are expected by pleasant surprises in the form of re-spins and bonus rounds of the free spins.

Reels of the game machine Fu Er Dai settle down against the background of stylish trimmed location issued in purple-red tones: the convenient sofa with a set of soft pillows is visible, red lamps radiate intimately muffled light. The game field is framed by figures of dragons which are read in China by sacred.

Except for subject characters with images of attributes of rich life there are also colorfully drawn nominals of playing cards. The game process is accompanied by dynamic music. Prize-winning combinations are indicatively displayed by animation.

Fu Er Dai is the five-reel slot with 10 constant active lines for bets. The control bar is minimized. At center sections are placed: Coins in which bets are selected from coins – from 1 to 5; Coin Value from which the nominal of coins from 0,01 to 2,00, and Lines in which the number permanently of the active lines – 10 is designated is selected.

At the left the Coins window showing quantity of money on the account of the player, on the right – the Bet window with a size of the general bet is located. The table of payments informs the user on values of coefficients of prize-winning combinations and nuances of rules of the game.

The purpose of a game is standard – to collect a maximum of advantageous combinations on slot reels to win. Such combinations are created of identical pictures which shall take positions according to pay lines, beginning from an extreme left column. The sequences shall be mandatory continuous.

The necessary quantity of advantageous elements is stated in the table of payments, there shall be from 2-3 to 5. The charge of an award depends on a current linear rate and coefficient of a combination – these values are multiplied.

Very frequent guests on the screen are Wilds, having the right for replacement of any element that gives a set of additional chances of a prize. Wild possesses extraordinary generous and spectacular options. Its emergence – and it can appear only on 2, 3 and 4 reels, very effectively.

The wild symbol is developed on all 3 cells of a vertical, suddenly turning into the beautiful half-naked Chinese woman with a magnificent tattoo in the form of a dragon on a back. In total girls are 3 – everyone on the reel. If the player is come into the view by one Wild – that is there is one Chinese woman, then this expanded element remains on the place, and other reels begin re-backs.

If 2 or 3 Wild turning into girls then start from the 5 free spins in each of which at the same time drop out the player will surely earn the reward. As Wild, having stretched for all reels, stick on several spins in a row, the mass of opportunities for the formation of prize-winning combinations is created. And the free session can be prolonged by the emergence of new wild symbols, as much as possible – up to 20 spins.