So-called fruit slot machines can be called first in ranks of thematic games. It is slots of fruit and berry subjects that entered the market a little less than 100 years ago and have been considered the most popular ones since that time. It is unlikely that there is at least one provider of gambling and entertainment content that has not produced a single fruit machine. Genesis Gaming is also no exception, as it has released the Fruity Grooves gambling machine for fruit and real fun! 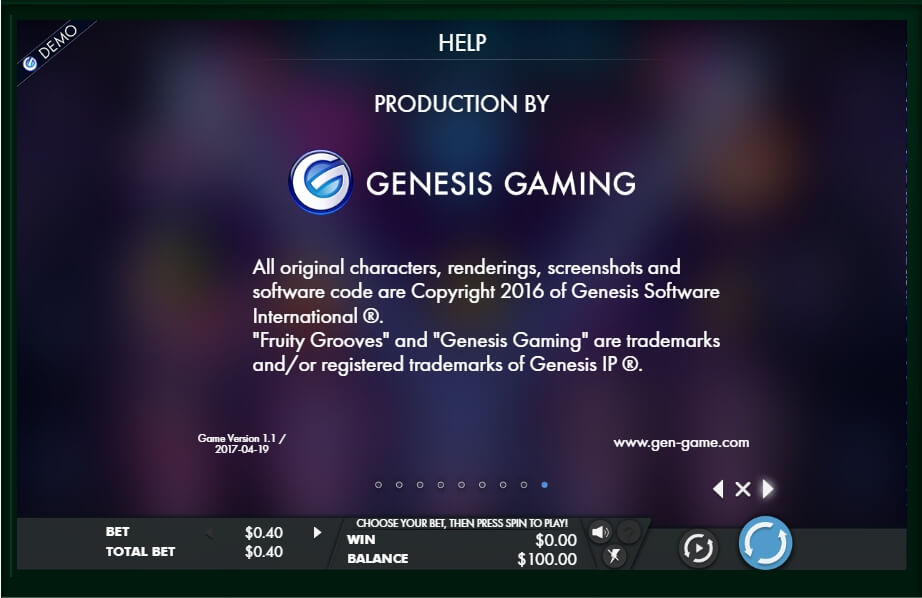 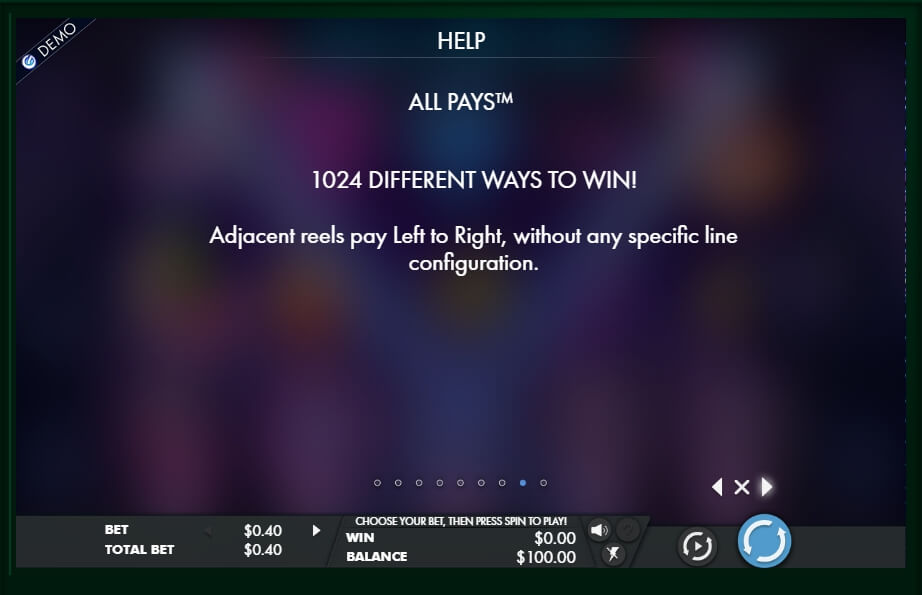 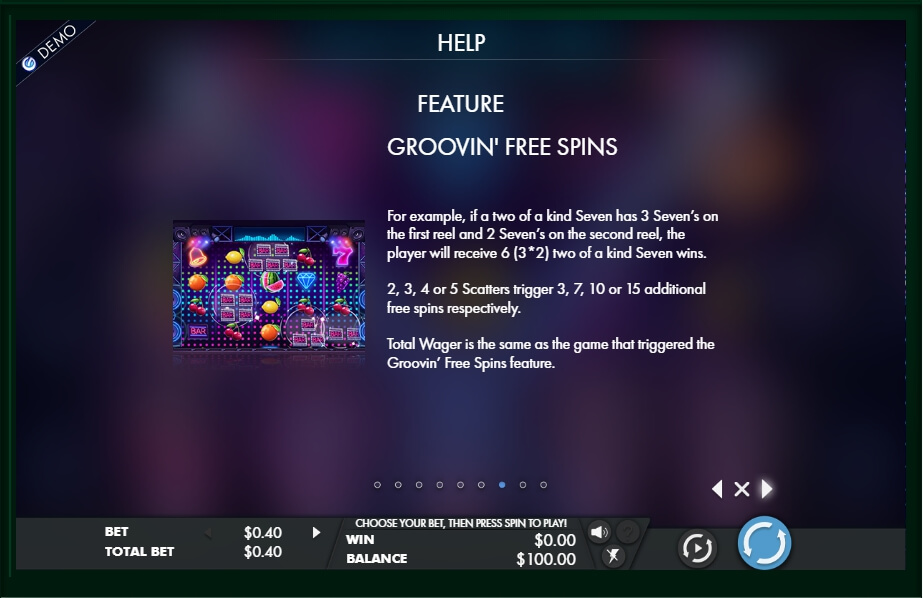 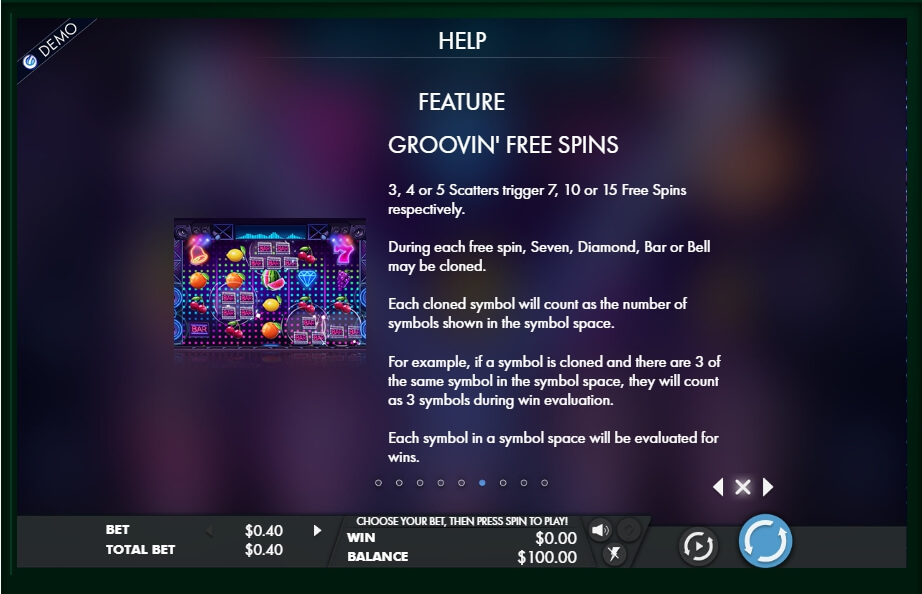 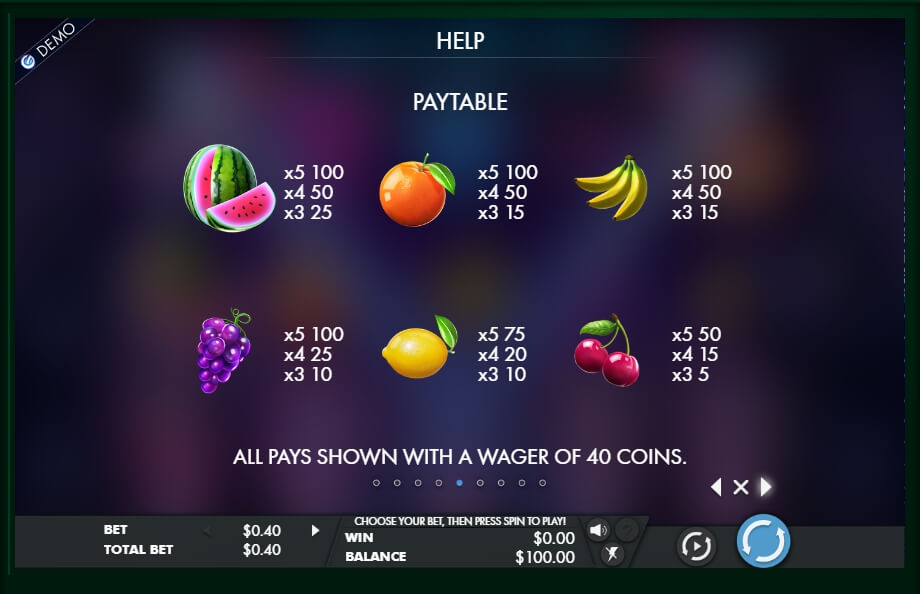 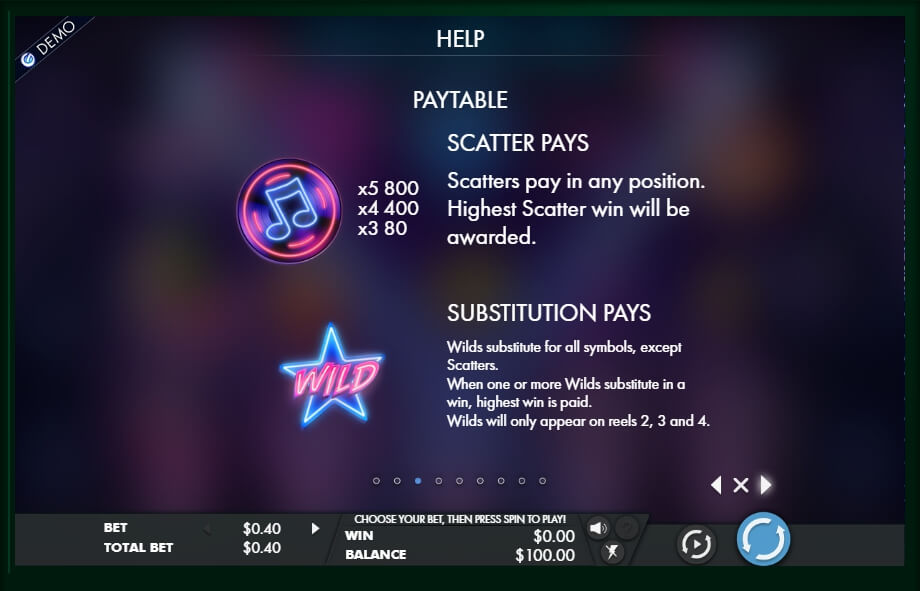 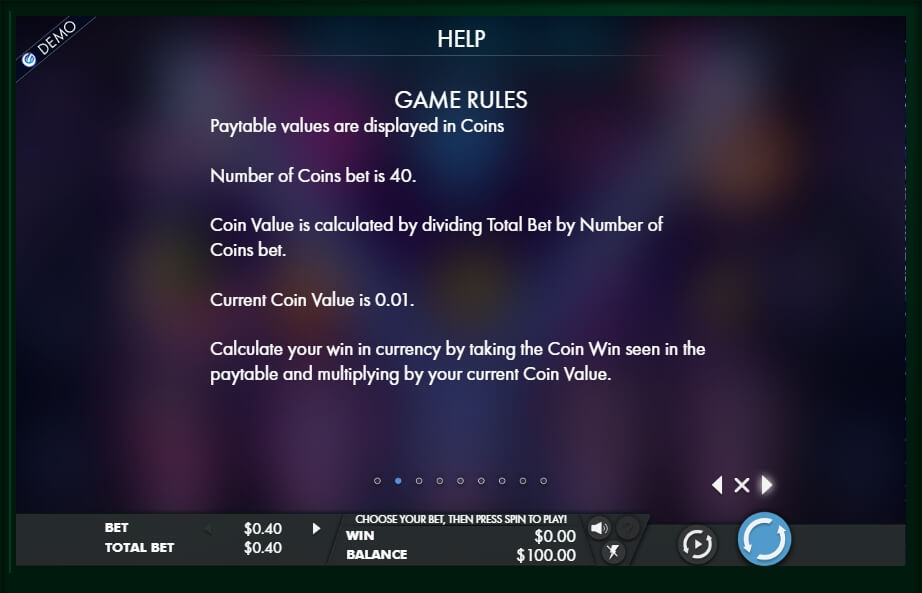 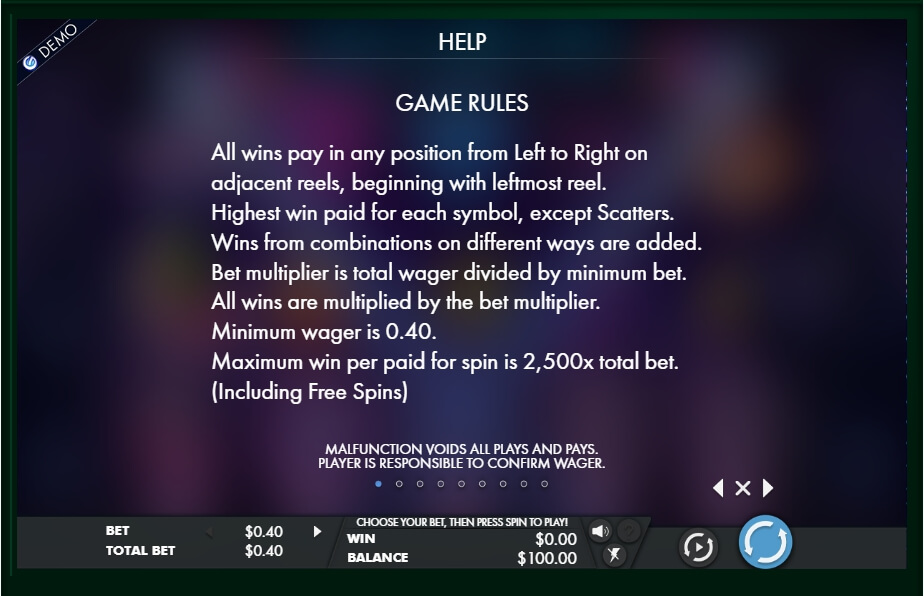 Fruity Grooves, although it is a fruit slot, reveals a real disco theme. Users will be able to visit an excellent night disco club, where clockwork plays around the clock, and neon lights add atmospheric and cheer up. Themes of bars and fruits have gone along for a long time, as they complement each other.

In case of game Fruity Grooves, the storyline tells you exactly how to spend your free time. The game tunes for fun, charges with positive and gives enough generous rewards! Just visit the Fruity Grooves club, for example, make sure that game from Genesis Gaming – a right choice!

Description of the Fruity Grooves design

The visual presentation of Fruity Grooves can only be described in one word – excellent! Overall palette of shades here is bright-violet, so that users instantly have the right associations with the entertainment nightlife. In the background, you can see the dance scene, on the sides of which are placed huge columns. It is from them that will sound a clockwork, and a truly dance melody, from which you want to start dancing.

The game field resembles a single solid neon screen, along which dynamically fly colorful lights. With help of such simple animation effects, the picture becomes much lively, brighter and more atmospheric. Half of symbols on reels resemble neon signs, from which it becomes more fun to play. In general, the interaction of graphics and sound provides an opportunity to get a real buzz from the entertainment process.

The game interface in Fruity Grooves is extremely simple and intuitive. The main space of the main screen is represented as the field with the 5-drum structure. There are no lines in the game, but the user can count on 1024 potentially bonus prizes that can be formed at any point in game. The main tool for setting the basic parameters will be the control panel. In the Fruity Grooves game this panel is at very bottom of the screen. It consists of several buttons that will allow you to adjust the settings. To left there is a button bet that is intended to adjust the bet.

Under the button there is a special counter that broadcasts final bet on spin that is very convenient. In the center of the control panel you can see the status of the user account, as well as value of last win. These indicators dynamically change during game.

Nearby there are buttons for the additional settings, as well as a key that opens the coefficient table and basic game rules. Right part of the control panel is represented by two start buttons: one of them is needed for standard spins, and the second one is for self-timer. At the same time, by pressing the automatic mode button, the player has an opportunity to set the number of repetitions of automatic spins independently.

Playing Fruity Grooves is pleasure because “automatic” means most traditional rules. As soon as user starts spinning, one can only expect when prizes are formed on the reels. It is worth remembering that departure point for all prize combinations is leftmost drum. The winning structure can include from 2 (sometimes 3) to 5 identical symbols. Doubles should follow one another without interruption, and the rewards will be charged according to rate and pay coefficients of the played symbol.

Since the game has wild and scatter symbols, users can count on a productive process. Wild is a universal element in the game, so he/she can become part of most of the attacks on the playing field. Scatter, as it should, plays differently and allows you to receive winnings in any position on the drums. In addition, this sign activates free spins in the amount of 7 to 15 pieces. Fruity Grooves is able to turn over the idea of ​​fruit slots. In addition, there is no downloading and no registration!