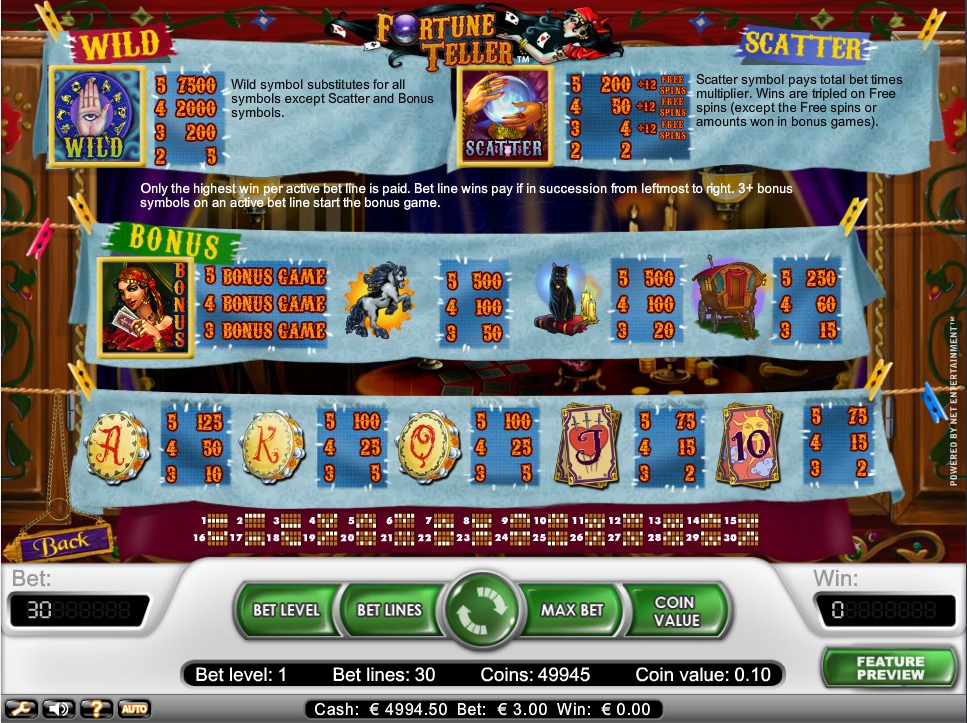 The future is dangerous and unpredictable. Everyone wants to know where to go, what to do, what to buy and much more. Unfortunately, not all people are given such an opportunity. And if someone begins to practice this without training, then most often, a person calls himself a disaster. And it’s about all the people… Except for the gypsies. This glorious people, have always had similar skills. Someone says that they are all born with this “gift”, someone believes that they receive it by inheritance.

As the gypsies say, this “gift” needs to be earned from the heavens. In addition, this is a big responsibility, not every person will survive. But despite this, there were always daredevils who “looked” into the future. This is what a video slot called “Fortune Teller” will tell us. The production of this slot is occupied by the company NetEnt, which means that we are expecting an unforgettable experience from this game.

The Net Entertainment Team offers a story of a fortuneteller who will talk about his craft. For your attention, the gypsy will give you a valuable prize. The magical power of a gypsy woman is embodied on 5 slot game drums, where thirty possible paylines are used to pay out. Each player will be able to appreciate the adequately beautiful design of the slot, as the developers endowed the characters with excellent graphics and animation. A gypsy girl is capable of fulfilling all desires and predicting only a fortunate fate!

The remaining attributes of the fortuneteller will help in the course of the game to get decent payouts. All buttons for control are located at the bottom, which has already become a “tradition” in online casino sphere. You do not need to change anything in this, because it is such an arrangement that does not distract the player from the game.

Some magicians can learn all about you from your palm. Everything is written there, we just do not know how to read symbolic signs. And those who have learned to do this have power over others. To see what is not given to others sets you apart on a general background. Look at the Wild symbol. In the palm of your hand you will see an eye that knows everything: both past and future.

It’s no wonder that a character can replace others in winning combinations. However, the symbol of palmistry cannot replace the symbol of the crystal ball, and will not be able to activate the bonus game of the tarot cards.

The symbol of the Scatter in the game Fortune Teller is a symbol of the crystal ball, which the fortune teller keeps in his hands. This animated symbol can appear wherever it wants and still will bring you profit if there are at least two scatter symbols. Payments are made according to the set fees that were specified in the payment tables.

When there are 3 or more Scatter symbols in the game of the Sibylline on the reels, then the bonus game of free spins is activated. And when three or more symbols of the gypsy woman predictor appear in the game on the drums, then a rather entertaining bonus game of tarot cards begins. You can win it by selecting and opening cards from three rows.

Along with the cards that promise to win, there are also death cards. Once you open such a card, then the game ends, and all the winnings that you could get in case of luck, you are shown.