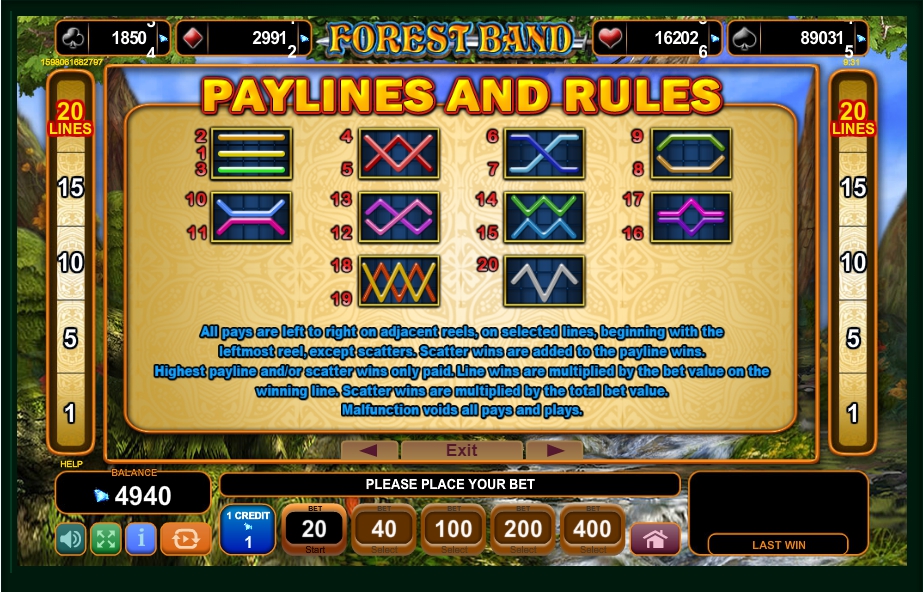 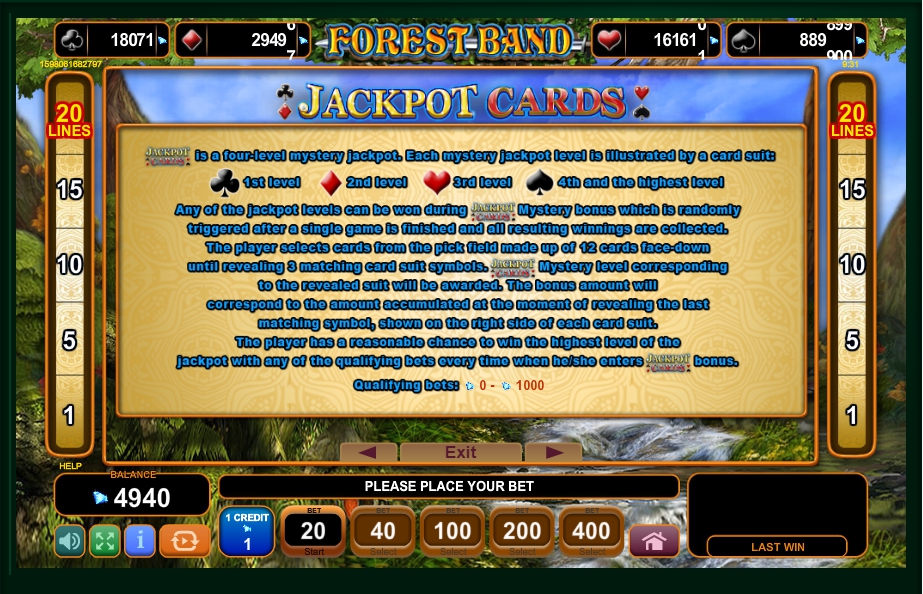 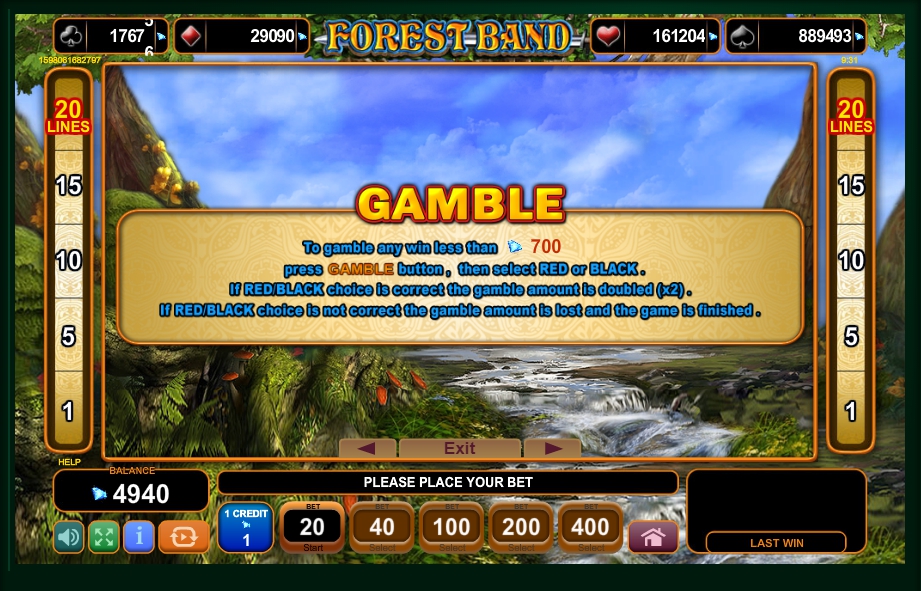 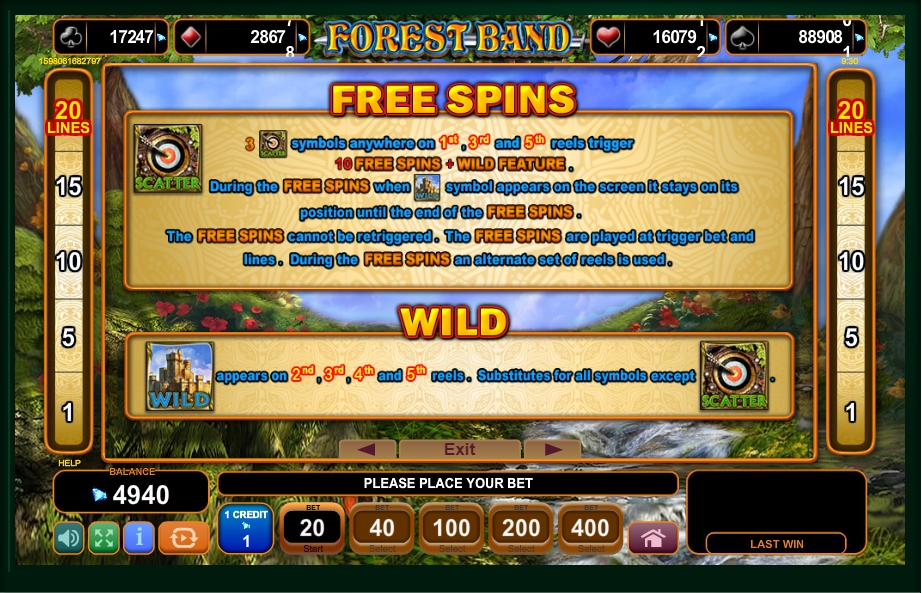 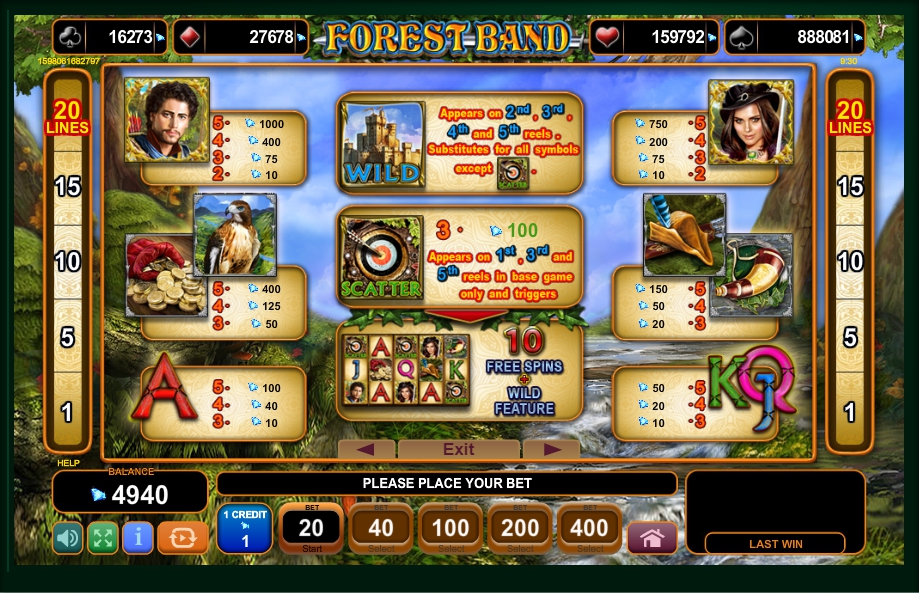 The Great Northern Route, paved by the Romans, leads us through the huge Sherwood Forest, which is not far from the city of Nottingham. It was Sherwood that became the main abode of the valiant Robin Hood and his band, which was assembled, when enemies burned Robin`s house. There were many merry men dressed in green raincoats in Robin’s team. Among them: Little John who was Robin’s deputy, Friar Tuck who loves food and beer, Much, the Miller’s Son, Will Stanley-Scarlett dressed in scarlet silk, a minstrel Alan-o-Dale and other very curious characters. Many legends have been composed, a lot of books have been written and a lot of films have been shot about Robin Hood. Now you also have an opportunity to play with him at the Forest Band slot machine by Euro Games Technology video slots provider. Its great graphics, easy-to-do control panel, special wild and scatter symbols, a risk game with multipliers and free spins, and four jackpots are waiting for you during playing the Forest Band slot.

Introduction to the game process in the Forest Band slot

The Forest Band slot is a five-reel one with 20 fixed paylines. The rules of the Forest Band slot are simple. You ought to activate any of the lines and rotate the reels. Winnings will be awarded to you every time when any winning combination of the slot elements will appear on the screen. Your wins will be monitored in a special table, so you can check it anytime if you desire.
The Forest Band slot will provide a gamer with the panel containing the bet/start buttons 20, 40, 100, 20 and 400, where it is possible to select the bet amount and the quantity of lines. The rotation of the reels is started by the green Start button. The Autoplay mode is also available. On the screen, the gamer will see all the information regarding the game process. Moreover, it is possible to adjust the sound and the image settings, if needed.
The graphics in the slot is extremely realistic and cosy with an excellent portrayal of the main characters. Looking on the screen, you will see a castle, images of merry men, an eagle, a bag of gold coins, traditional symbols of playing cards, letters and others. The gamer can check the value of any symbol in the information field of the Forest Band slot in detail.
For example, the playing cards will bring maximum from 50 to 100 points and five icons of Beautiful Marion on an enabled pay-line will provide with 750 points. In addition, the jackpot of this game reaches 1000 points.

Free spins, the Gamble options and the Jackpot Cards Mystery

The Wild element is the Castle, which arrives on the 2nd, 3rd, 4th and 5th reel. It will substitute any element to form various winning compositions. Scatter is a Target, which occupies the 1st, 3rd and 5th reel. It will open the door to the free spins bonus and activate the sticky wild symbol, which will stay up until the free rotations end.
Having won, a gambler has an opportunity to double the amount of winning in a special mode of the risk game named Gamble, provided for the most adventurous and confident gamblers who are not afraid to take risks and gain real money. On the screen, the gamer can see playing cards, which begin to flash black and red. You need to determine a colour of the face-down card to double your wins, otherwise, you will fail. The gamer can imagine being in a Las Vegas casino clicking the Gamble button with the wins doubled or even tripled.
The gamer has an opportunity to obtain one of four jackpots in the Jackpot Cards Mystery option of the Forest Band slot. There are four card suits: clubs, diamonds, hearts and spades. The slot usually activates these jackpots randomly. A player ought to guess three cards of the same suit from 12 ones, which are on the screen.

According to the legend, Robin Hood took money from the rich and distributed it to the poor. The slot can provide you with an opportunity to gain a lot of real money and help others as Robin did. Moreover, you can play the slot online without registration or download to become a merry man of the Robin Hood’s band.