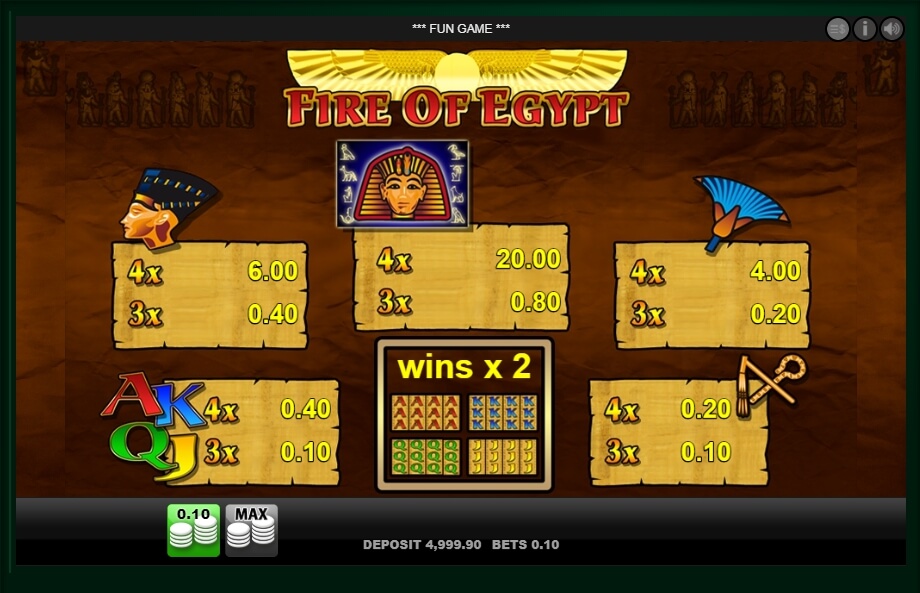 Ancient Egyptian themes are most often used by producers. As statistics show, such slots give unforgettable adventures that are filled with treasures and mysticism. Usually, such a slot suggests going on a trip and exploring the ancient pyramid that holds secrets. Therefore it is very difficult to choose a slot that has an Egyptian story with an unusual theme. We want to offer you a new exclusive Fire of Egypt slot that was implemented by the Edict (Merkur Gaming) corporation. The peculiarity of the slot is an unusual structure and additional prizes.

The demand for slot machines of the ancient Egyptian theme is conditioned by the fact that this historical period is the most interesting. In spite of modern technologies, scientists can not reveal all the secrets still. This slot machine will conduct an interesting excursion that has prepared many pleasant surprises. The user will open the door to the pyramid. According to scientific accounts, each pyramid has a special history and purpose.

For example, large pyramids are meant for burial. Different rituals were held in small buildings that corresponds to the chosen subject. In the background, the entrance to a mysterious room is depicted. Here we can see different sculptures and inscriptions. Probably, anybody does not want us to visit this place…

The color scheme consists of bright colors on the playing field. By the way, it is based on 4 reels of 25 available lines. The playground is made in the style of papyrus that was a prototype of modern paper. The logo of gold is on the top.

The participant should familiarize himself/herself with the features of the function keys in order to effectively perform the game in the class. The control panel is located at the bottom. There are few buttons here so you can easily control the game process. The Spin key starts the game.

The Autostart button activates the automatic mode that passes without user intervention. You also need to make a bet and choose the number of active lines (Bet and Lines buttons). These are all buttons that control the gameplay. All results will be displayed in the corresponding windows.

During the main round will be charged for the prize combinations that are formed on the active lines of the video slot. Such a chain can include 2-5 thematic symbols that are paid according to the payout table. We can confidently say that the user will receive an interesting game process that will present real money.

The player can receive up to 80,000 dollars following simple rules. We would like to advise using the demo mode for beginners. This game mode allows you to familiarize yourself with the game’s characteristics for free. In addition, Fire of Egypt is optimized for modern gadgets. Everyone can enjoy the game on their mobile device.

Gems of the Night