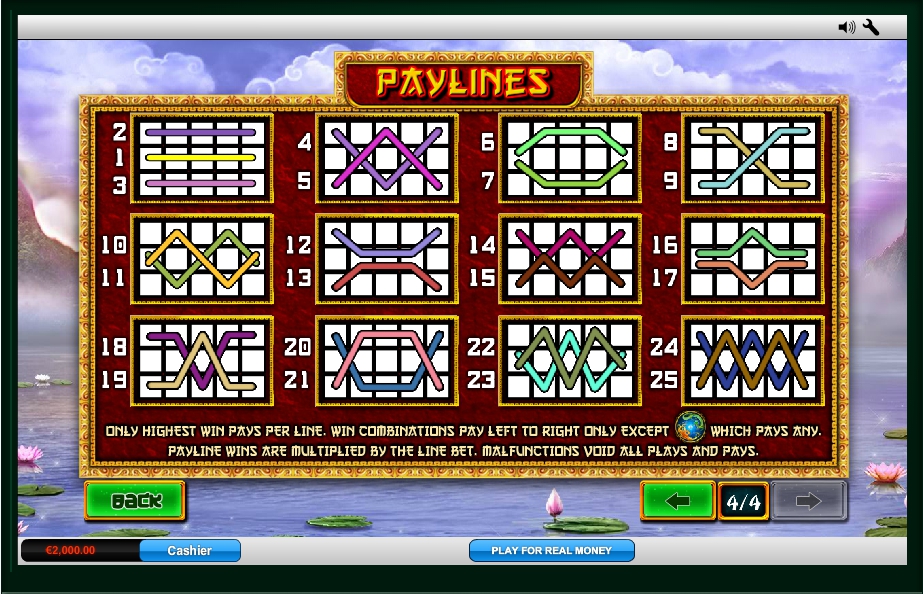 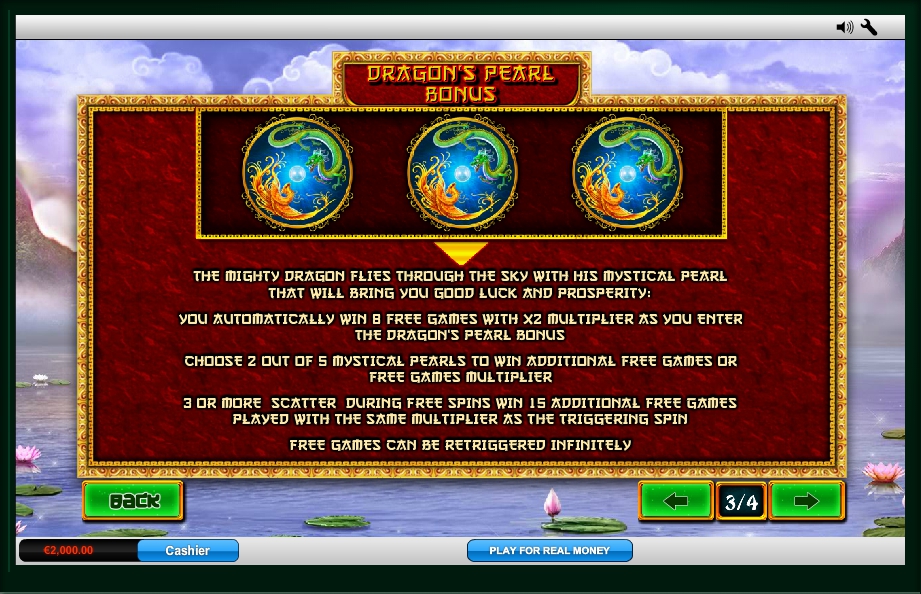 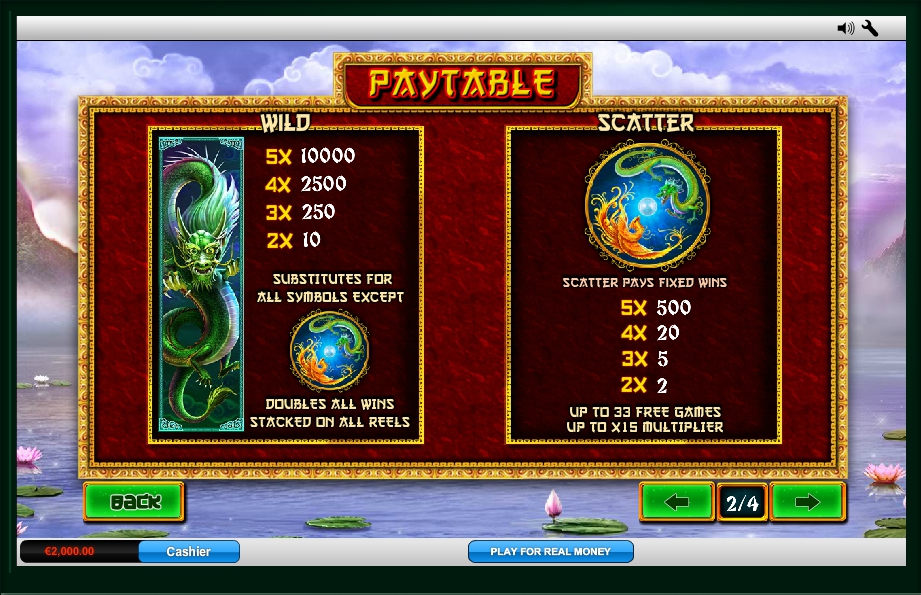 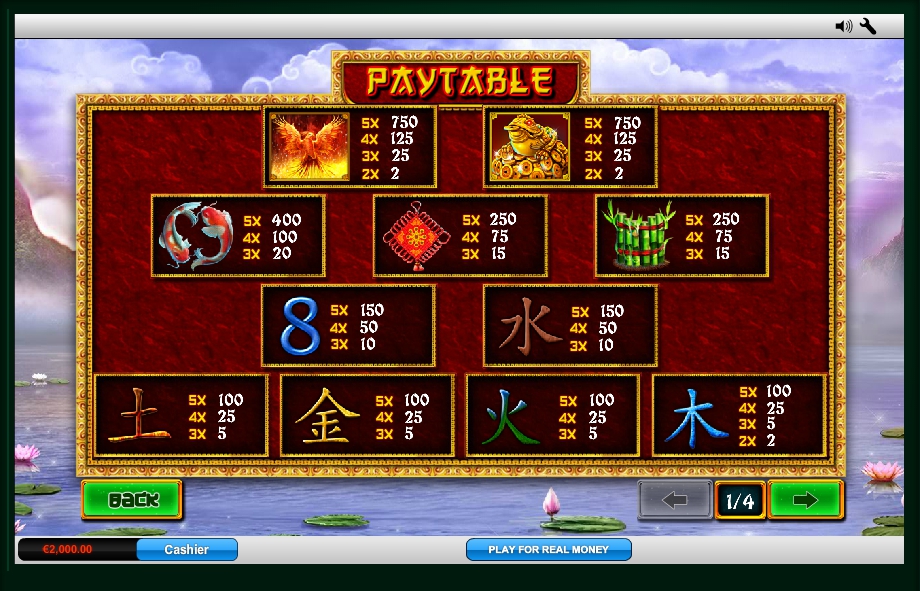 Playtech always subtly captures new trends in the game space. The rapidly growing popularity of the Chinese theme led to the appearance in the collection of the famous manufacturer of Fei Long Zai Tian gambling machine. The original interpretation of the popular story about the dragon will appeal to many users.

Fei Long Zai Tian reinterprets the traditional for Chinese culture history of the dragon. This time he climbs high into the sky to watch the game from there. The dragon is not alone – he has a beautiful girlfriend, with whom he rests under the moon. The new storyline makes the slot more lyrical and kind. Elements of culture, traditional Chinese symbols (hieroglyphs, golden bird) create a national flavor in the game. The slot looks like a virtual tour of Chinese history. Why not use the slot to visit the Celestial Empire? You may play for free, with no registration and no download!!

Description of the design of Fei Long Zai Tian

Two colors are widespread in Chinese culture: in clothes, in the interior. Gold and purple – these two colors dominate and on the playing field of the machine Fei Long Zai Tian. A magnificent color duo looks great on a blue background – the sky and the ocean merge into a single space. The picture on the screen looks great: the bright colors blend harmoniously with each other green buttons bring a little freshness to the design.

Thanks to the skillful animation the characters come to life – the spectacle truly fascinates. The protagonist of the plot – the dragon – hovers in the sky, making rapid movements. Golden sparks fly from the blazing firebird. Even modest hieroglyphs, acting in the slot analogs of card symbols, at the time of successful combination radiate a wonderful radiance. Sounding throughout the game, the Chinese melody shades the plot slot looks thematically uniform on all levels of design.

The control panel in Fei Long Zai Tian is traditional for Playtech. On the left side there are buttons for betting: Line switches the number of lines for a single round, and Lie Bet is needed to select the size of the line bet. On the right there is an option for setting in one click the maximum bet – the button Bet Max.

Nearby are the buttons responsible for rotation: Spin activates the standard spin, and Auto Play starts a series of auto rotations. A special purpose for the Info button is that it opens the help desk pages. The centrally located scoreboard keeps the player informed of the size of the total bet and the payout that has fallen in the round.

Fei Long Zai Tian has 5 reels. It has 25 lines. Announce the game you can any number of lines. Each line takes a bet from 0.01 to 50 credits. The largest slot game in the slot is 1250 credits. At low rates, the gain can also be significant, because the machine has high coefficients, the largest of which is X10000. Charges are paid for combinations formed from the same 2 / 3-5 characters continuously lined up on the active line.

Start winning combination is required from the leftmost drum. If there are several successful combinations in a round, each is paid, and the amount of all accrued payments is sent to the balance. In the formation of payment combinations, a wild symbol takes an active part – occupying the entire vertical or only a part of the dragon. It replaces any image on the line, except for the scatter symbol.

The scatter symbol (the scatter) is not playing on the line – it’s enough to win in order to drop it in 2-5 any windows of the playing field. In addition, skatter-combination of at least two balls with a dragon and a feather-bird image is a condition for obtaining free spins. To start the actual gameplay, you need to press Spin. Instead of basic rotations, you can start automatic – the Auto Play button and the pop-up options 10/25/50/99 will do it.

In the machine there are only elements of the bonus thematic game. And they are plotted inside another promotion. If a combination of 3-5 balls with the image of a dragon and a feather-bird was formed on the screen, the first series of free spins – 8 rotations starts in the slot.

Each winning combination obtained at this stage is evaluated at a double rate. To extend the free session, the player must point to one of the pearls that appear on the screen. A successful choice will allow continuing free spins, but now with an increased multiplier.

Moving along the bonus stage, you can get up to 33 rotations with a multiplier in the last stage of X15. The bet in the free spins is performed by the institution its size is equal to the amount exposed by the player in the last paid round.