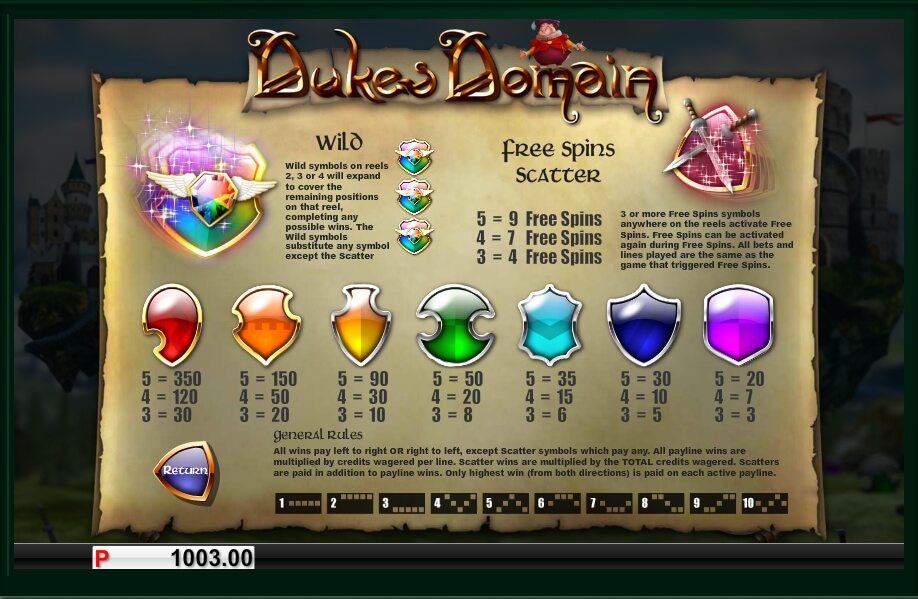 Try yourself as a warrior and traveler of the Middle Ages. This is a video slot game about the times, when people used to travel on ships and horses. They could get to the lands unknown in several days. But they looked not for the pleasure and bright emotions. They had to fight and win to save their lands independent! Not you have a chance to try yourself in the middle ages history and play this bright video slot game with no downloading and no registration on our website!

This is a 5×3 grid game. In total, five reels and three vertical rows make the interface look traditional and quite easy to play on. There are 11 playing symbols in the game. All of them have different price. For example, painted specially for the slot symbols will cost more than other symbols. Players will be able to find 10 winning combination in this game. Usually, developers of bright video slot games offer players 20 or 25 paylines.

However, the Genii Software has decided to make this game easier. As well as, less lines there are in the game, the easier it will be to win a jackpot! Players can regulate the amount of lines manually. They are not fixed. Play only on the certain lines you consider being profitable ones. The minimal bet in the game is one cent per one line only. The maximal bet is five coins per one winning combination.

Change bet pressing the “plus” and “minus” buttons on the bottom of the interface. The Autoplay option is also available in the game. Just hold the start button and you will get numerous automatically turning on spins that can let players start gambling sessions one by one.

Wild and scatter symbols in this game will bring you not only 9 free spins and a great boost of cash, but also a lot of money and pleasure of the game! The wild one can be found on any reel in the game (there are five reels at all). However, there is surprise for the player.

If the gambler catches wild symbols on the second, the third and the fourth reels, he/she will be able to turn just the wild one into an expanding wild symbol. The expanding wild one fills all the reels with wild symbols and gives the player a chance to get as many winning combinations as possible. It is a great luck to activate such an option in the game!

Why do players like wild symbols that much? It is just because they can appear accidentally and replace all other symbols with those that are needed to get a winning combination. The scatter symbol can also be found on any reel in the game. However, if there are three scatters on the screen the same time, players will get their cash increased quickly. Moreover, three scatters on the screen can give the player a chance to get 9 free spins activated!