You can not play this game for free
For free slots game go
Play free
or
(23 votes)
Game Played: 0
Full screen: close 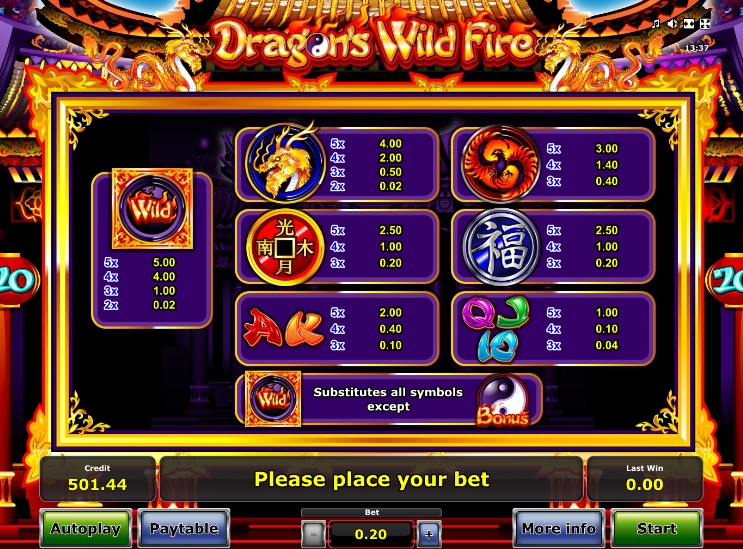 In the Asian culture, dragons are symbols of wealth, prosperity and luck. It was often used as a symbol of China as was mostly considered as a friendly, but dangerous magical creature. As Asia in the Western culture is often associated with wealth and mysteries, no wonder that Oriental theme is so popular among modern slot machines. Most of these games include dragon images, and Dragon’s Wild Fire, developed by GreenTube, is not an exception. As this game needs no registration and even no downloading, everyone can try to win real money in it.

How Can You Tame Dragon’s Wild Fire
Gameplay and Prizes

The value of the Jackpot in Dragon’s Wild Fire is impressive (40,000 dollars). The reels in this game have the 5×3 format. There are 20 unadjustable paylines on the game screen. This game has the untenable autoplay feature that can only be turned on (and, of course, off). The minimal bet value is 40 cents, and max bet value is 100 dollars.

The game background is drawn to represent the Chinese temple, while the reels look like 5 golden frames in front of it, decorated by golden dragons. Among the paying symbols, there are a deck of poker cards from Tens to Aces, a silver Chines coin, a golden Chinese coin, an image of flaming Phoenix and a golden dragon head that pays the most among them. When the Phoenix or the dragon head symbols take part in winning combinations, flaming animations are played on them.

How Wild Dragon’s Wild Fire Is
Features and Bonuses

When any win occurs in Dragon’s Wild Fire, the player is offered by two choices. He/she can either collect his/her winnings immediately or gamble them in the small mini-game. If he/she chooses the latter, he/she will have to guess whether the next turned card will be black or red. If he/she wins, his/her winnings are increased and he/she can choose, whether he/she wants to continue this mini-game or to collect his winnings. Any failure to guess the color of card results in the losing all of the money won in this spin.

There is a wild symbol that looks like a flaming “Wild” caption and substitutes for all paying symbols. There is a scatter symbol in this game. It looks like a Ying–Yang symbol with the flaming “Bonus” caption. It can only appear on the first, third or fifth reel and grants the player with 7 bonus rounds when collected.

During these rounds, additional free spins can be won. In addition, there is a “stepping wilds” feature, active during these free spins. This feature works the following way: before every free round, the player can choose one of four directions (up, right, down or left). After the reels stop, all wild symbols will move on reels in the chosen direction, replacing any other symbols with additional wilds.