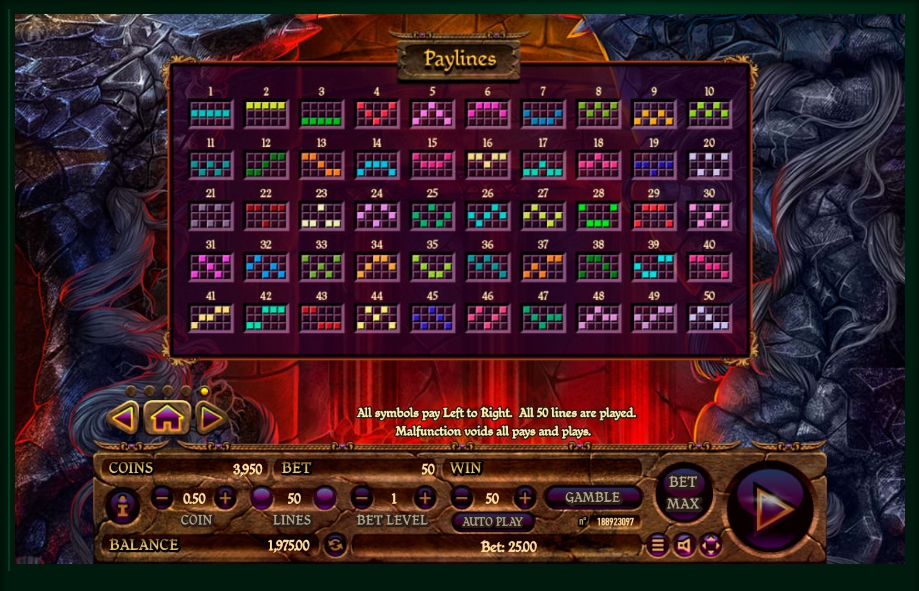 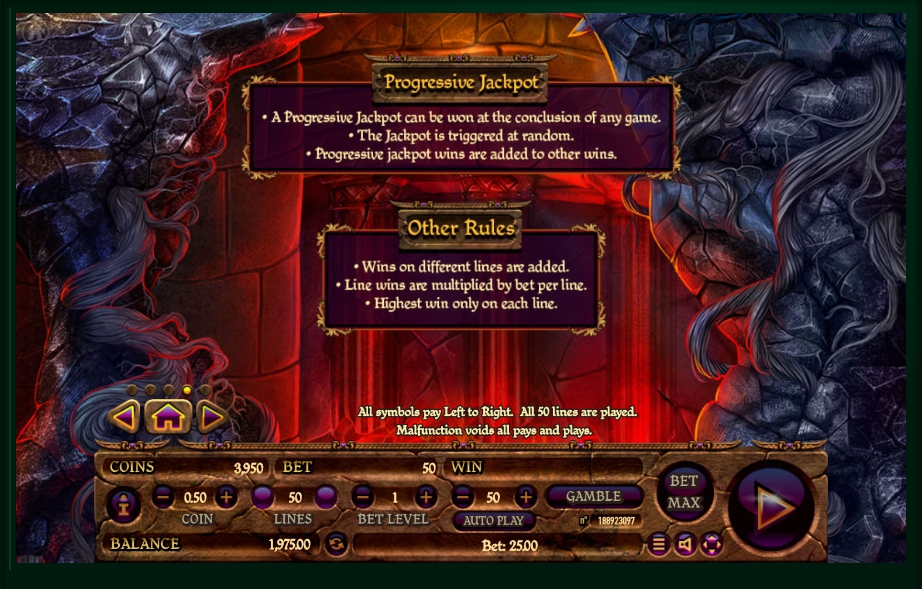 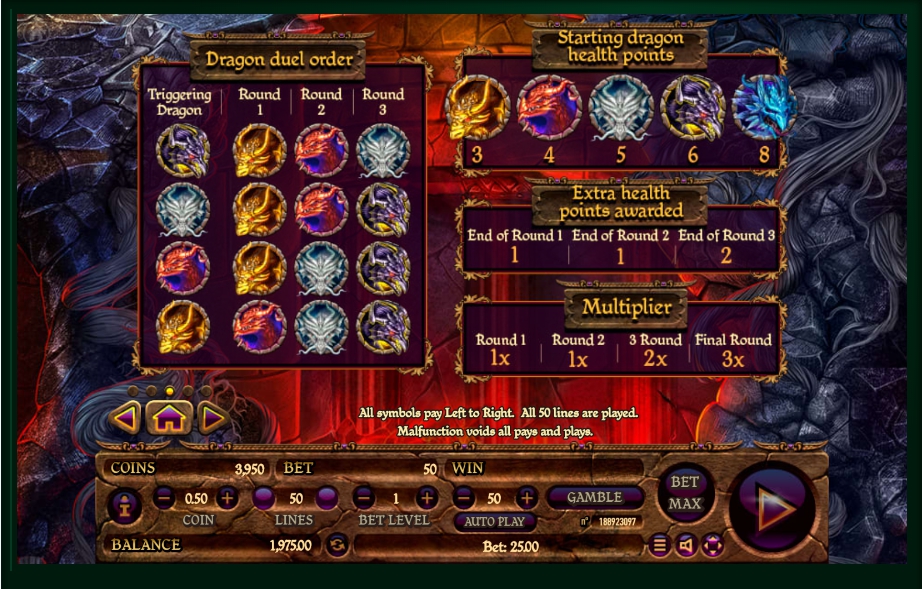 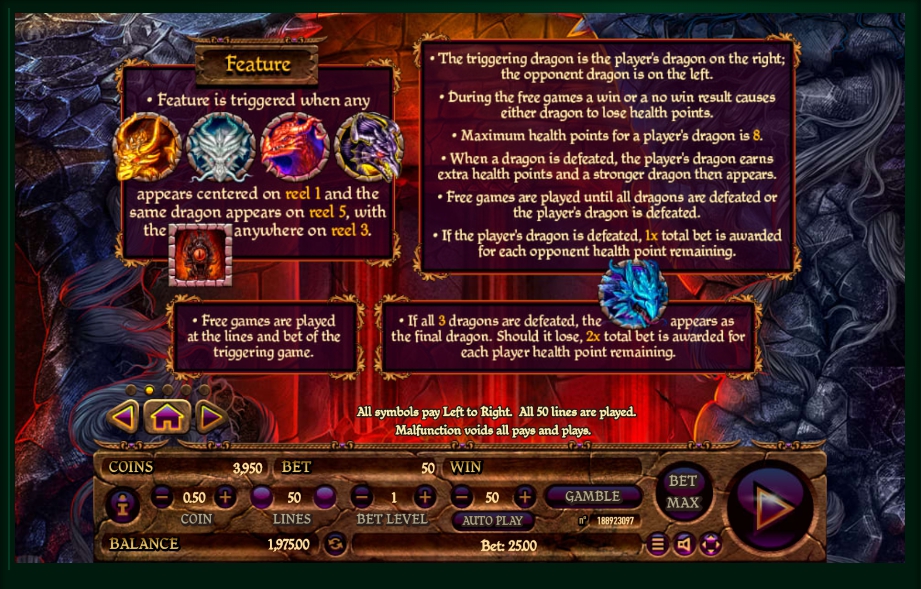 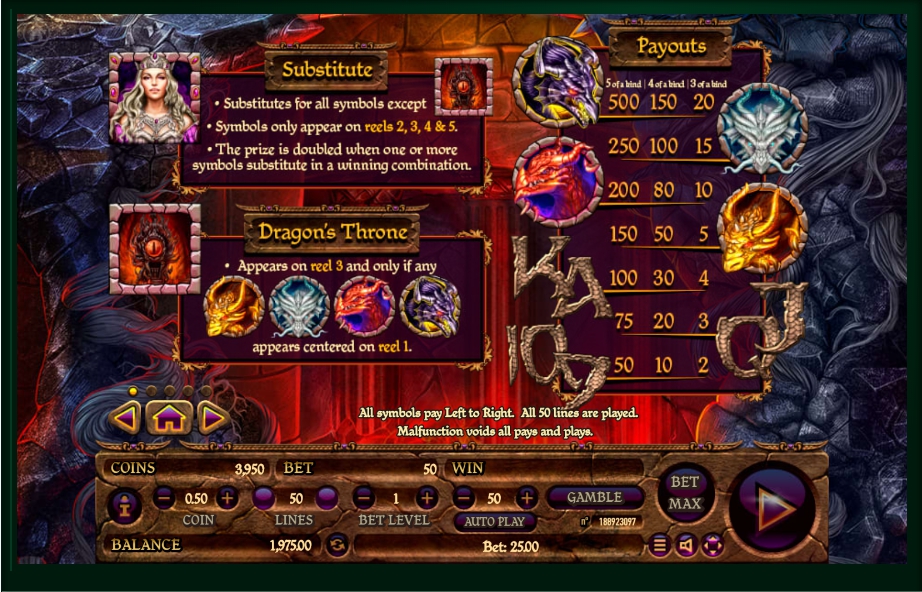 Dragons are one of the most legendary creatures that earn their place in mythology and subject to controversy even in our day. Developers from the company Habanero even dedicated a separate slot to them and called it Dragon’s Throne. You have a real opportunity to make friends with these majestic and wise creatures, and if you are lucky, you will get some of the dragon hoards! Play Dragon’s Throne for real money in any of the below Habanero casinos, or go on a trip with these sometimes dangerous, but such bewitching creatures in a free mode!

The game screen of the Dragon’s Throne casino game is created in the form of a dark filled with treasures dragon cave, from the bottom of which rises a mysterious reddish glow. The design may seem a bit gloomy at first glance, but it does not distract from the main element on the screen – playing reels. They are here invisible, which means you will not see borders, but the overall outline is made in the form of a patterned frame.

Under the reels is an interactive table of winning combinations, as well as the already familiar to each gambler buttons control the gaming machine:

Like most of the slot machines from Habanero, the Dragon’s Throne casino slot has 5 game reels and 50 active lines. For each of them, you can put from 1 to 10 coins, but the range of available denominations of the wager is quite impressive – from 1 cent to 10 dollars. The slot machine also offers players to compete for a progressive jackpot, which is randomly given for the luckiest player during the session.

Game characters of the Dragon’s Throne progressive video slot are very coolly worked out and completely reflect the theme of the slot. Here you will find images of various dragons, their treasures, and glowing crystals. Moreover, in the game, there are standard card symbols, but they have an interesting scaly covering in the form of dragon skin. These symbols are able to bring you some coins almost at each spin. Also, in the Dragon’s Throne progressive slot there are also special characters that affect the gameplay:

Also, the slot offers the players a standard bonus game for doubling, which is triggered after any winning combo.

The Habanero Manufacturer always competently approaches the release of each of its slots, and Dragon’s Throne is no exception. Here we see a well-worked out plot, appropriate design, and sound design, as well as the availability of pleasant bonus options and a good main prize, which is worth fighting for.  The slot will definitely appeal to experienced gamblers, and if you are new, then you can play Dragon’s Throne in demo mode in any casino that is licensed by Habanero.