You can not play this game for free
For free slots game go
Play free
or
(3 votes)
Game Played: 4
Full screen: close 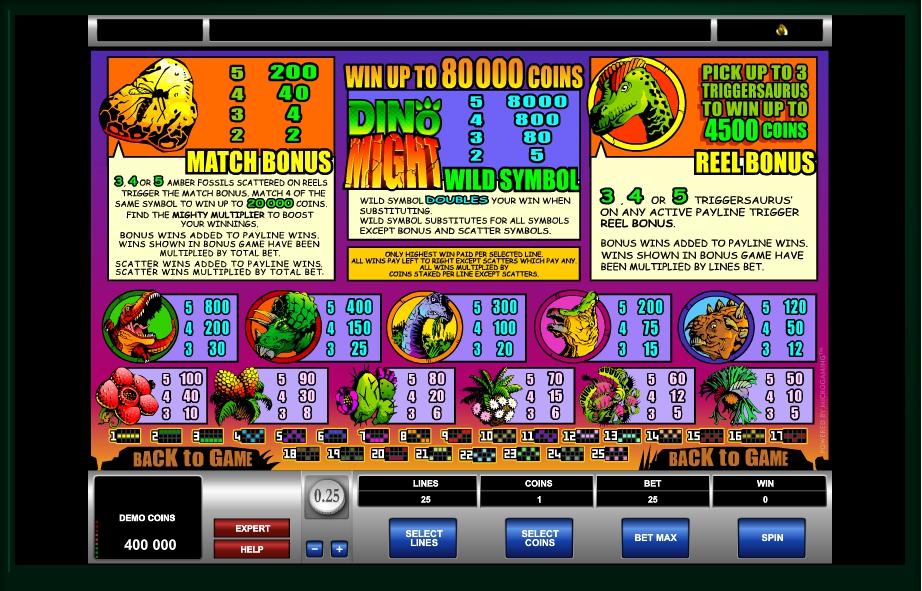 The Dino Might is another video slot game by the leading casino software developer, Microgaming. It is about the dinosaurs, the powerful and vile creatures that inhabited the Earth millions of years ago. It is a standard slot machine game of the traditional five reels and 25 pay lines. Because of its big jackpot and other ways to win, it is a great game for both newbies and experienced gamblers. This online casino game can be played for free or for real money.

Dino Might slot game has a very simple interface with not too many buttons to click. To play it, you first need to choose the number of pay lines, the size and the number of coins per each line. You can place as many as 10 coins per line, and the size of a coin can be anywhere from 0.01 to 0.5. The process of placing a bet can be simplified: you can just click the Bet Max if you want to place the biggest bet available in the game.

The interface is very intuitive and it is not that difficult to understand how to play this slot machine game, but for your convenience, there are extra info buttons in the interface. You can click them to learn more about the game and its rules.

There are also info plates that show how much coins you have won, how many of them have left, as well as your current session ID, how many lines you have chosen, and how many coins are at stakes. The game can be played in the Auto play mode or it can be started by clicking the Spin button.

How to win in the Dino Might slot game

Dino Might resembles traditional slot games in every way possible. It has many different symbols, and when some of them appear in the same line, you can win credit coins or real money. You can win up to 20,000 coins if you are lucky enough. Different symbols pay 50x to 800x your initial bet, with the T-Rex dinosaur being the highest paying symbol.

Hitting the jackpot is not the only way to win this casino game. There are other symbols that can give you extra coins. First, it is the game logo symbol that works as the wild symbol of the game. Whenever it substitutes for another symbol in a winning combination, it multiplies the prize. The wild symbol can replace almost any other symbol, except for the scatter, the jackpot and the bonus round symbol.

The amber fossil is the scatter symbol that can trigger the Match Bonus game. When there are three, four or five of these symbols on any pay line or reel, the bonus round starts. It is a small match-it game that can result in a mighty win of 20,000 credit coins.

All wins earned during the bonus round can be multiplied if the multiplier symbol is also in-game. Another bonus game is triggered by the Triggersaurus symbol. 3 identical symbols start a picking game and you need to pick a certain symbol to win up to 4500 credit coins instantly.

Dino Might: play it for free or for real money

The Dino Might slot game can be played for real money or in the demo mode. The latter option gives you a possibility to enjoy this game for free. You can play as many games as you want. No download or registration is required.