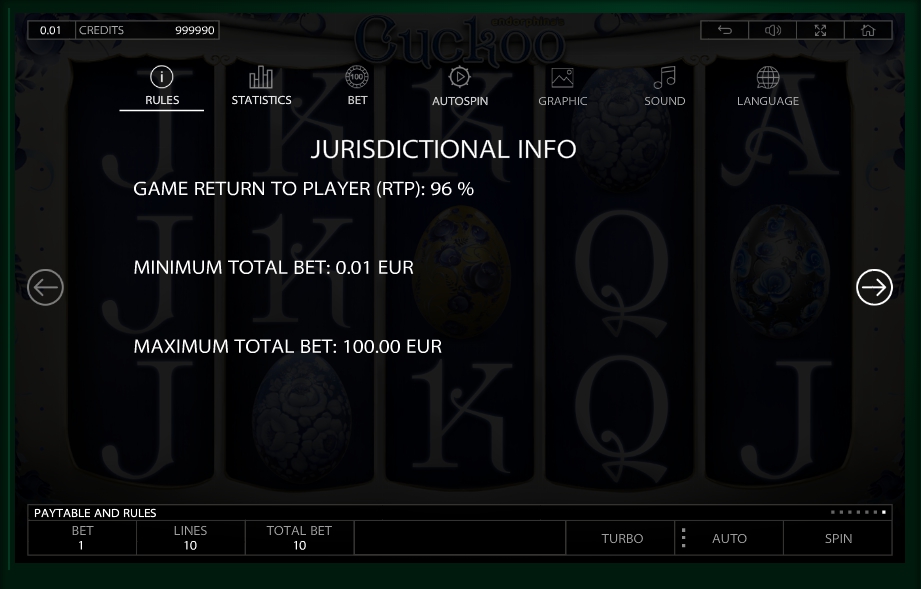 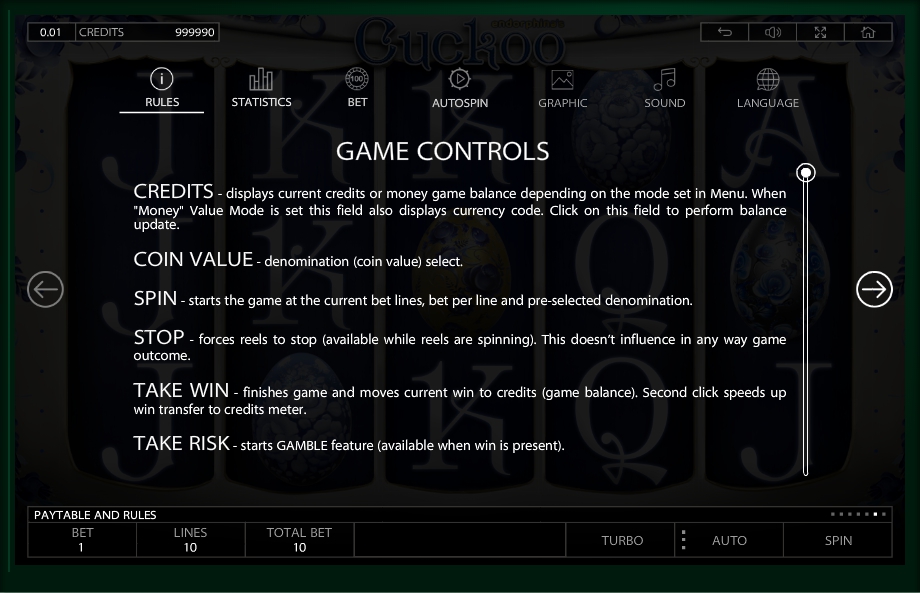 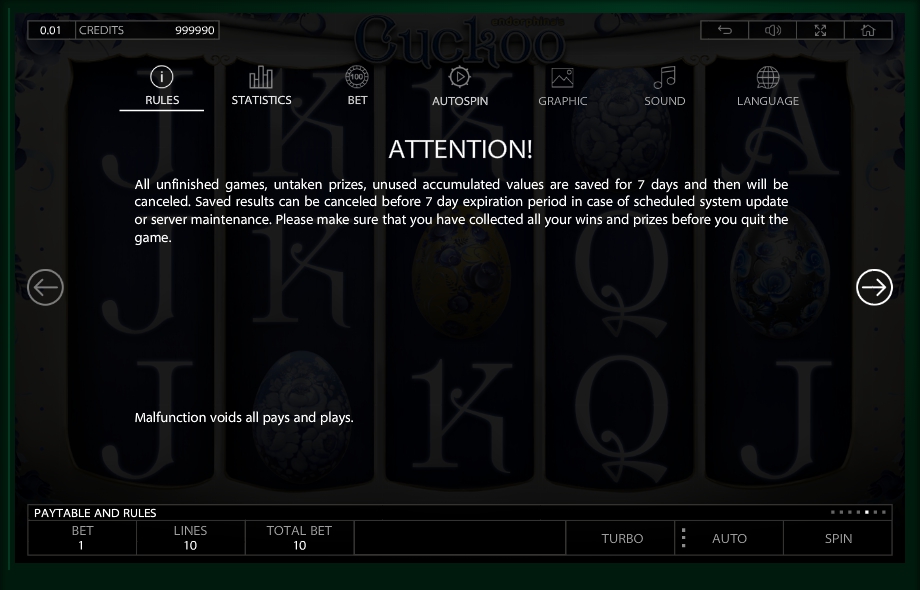 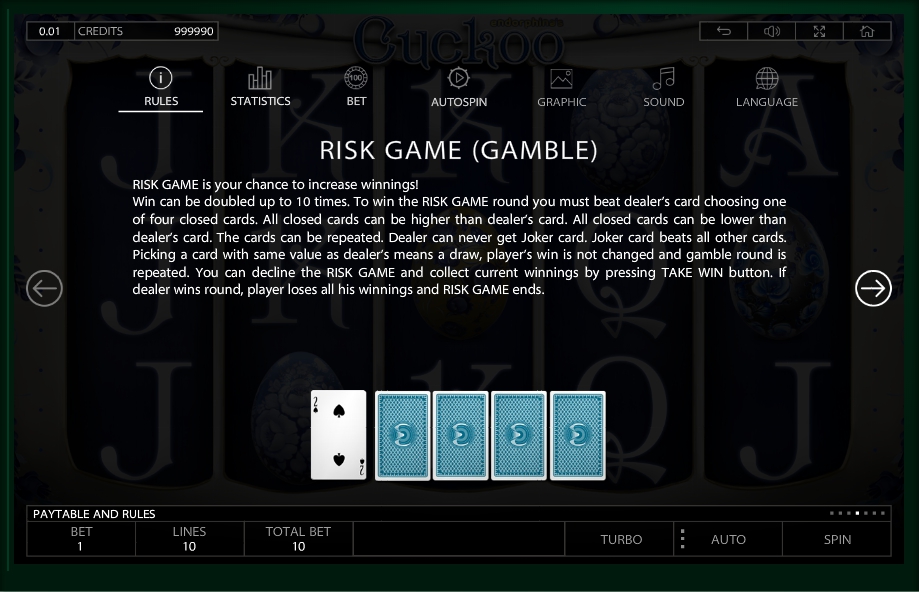 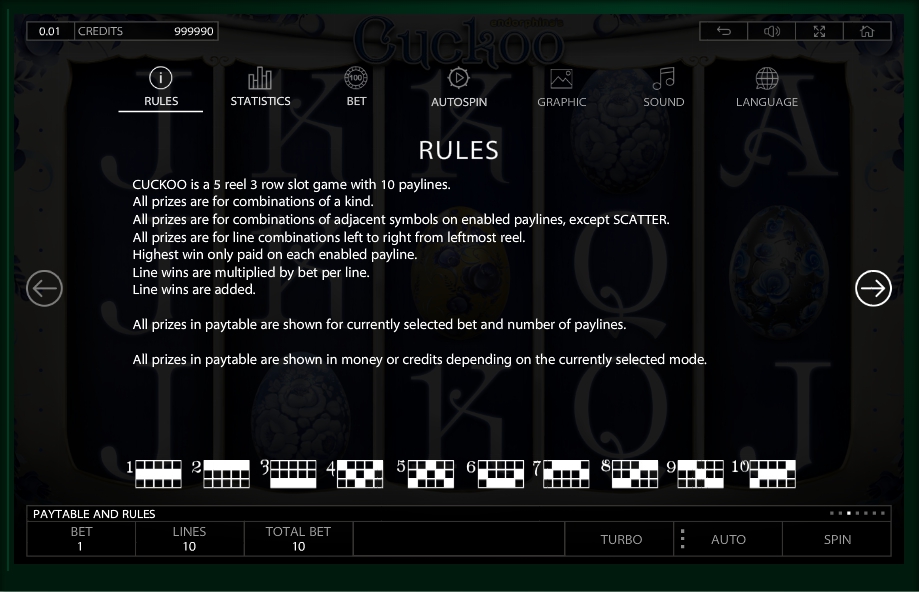 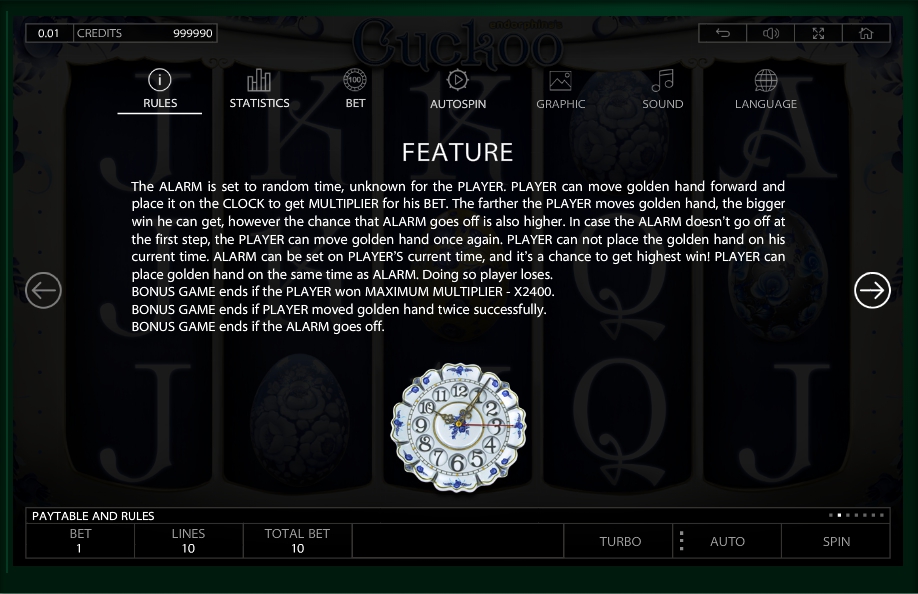 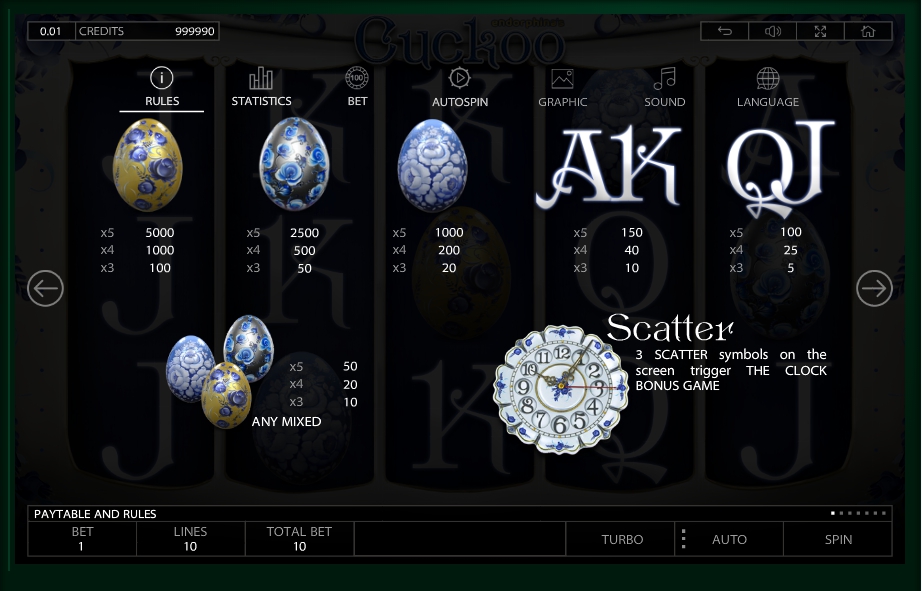 Surely, there was a cuckoo clock in your house. There was a time when this device for timing was all the rage with a possibility to be found in almost any home. Moreover, even now in some houses, this old friend takes its proper place. It was the cuckoo clock that became a basis for a new and unusual theme of the Cuckoo Slot machine from Endorphina. Despite a rather strange subject, the model turned out to be more than successful and interesting. You can see by yourself and play Cuckoo Slot for free on our site with no registration.

Description of the interface of the Cuckoo Slot

The Cuckoo gaming machine will attract your attention right after launch. The developers used for its color palette only three hues: white, blue with its shades, and gold. Despite this, the slot turned out to be quite beautiful, being decorated in the style of folk crafts, so the design will surely be remembered. Its control panel isn’t knocked out from the general style, and the commands located on it are familiar to each player:

The Cuckoo slot machine has 5 reels and 10 active lines. Game symbols can form combinations not only in a straight line, but also diagonally, or in a column. The wager in the game varies from 1 to 10 coins per line, and the range of rates is from 1 to 100 cents. A jackpot in the game is equal to 5000 coins.

The description of the game symbols of the Cuckoo video slot

The game symbols of Cuckoo casino slot are very amusing and surprisingly well worked out. Here you will see painted porcelain eggs, plates, and of course, a cuckoo clock. In addition, the slot contains standard symbols in a form of card denominations, which also quite often form winning combinations. There are no wild symbols, which could affect your profits for the better in the Cuckoo casino game. However, 3 collectible eggs are the most profitable icons.

For five blue eggs on any active pay line, you will receive 5000 coins. The silver ones will give you a win of 25,000 coins, and finally, the golden eggs will bring you the most important prize – 50,000 coins, 10 times more than the jackpot! Scatter in the game is the cuckoo clocks. If you collect 3 or more scatters, a bonus level will open. Adjust the clock with a golden arm, and get a bonus in a form of multiplied winnings, additional spins, and coins. Moreover, in the Cuckoo five-reel slot machine, you can face a standard doubling game, which is activated with the Take Risk button at the player’s will after gaining any winning line.

The incredibly funny and interesting Cuckoo slot will certainly become one of your most favorite gaming machines. Its pleasant gameplay, availability of bonuses and an impressive jackpot is everything a slot needs to be guaranteed with gaining a devoted audience. And if you just want to have a good time, then you can try the Cuckoo slot out without registration directly on our site.