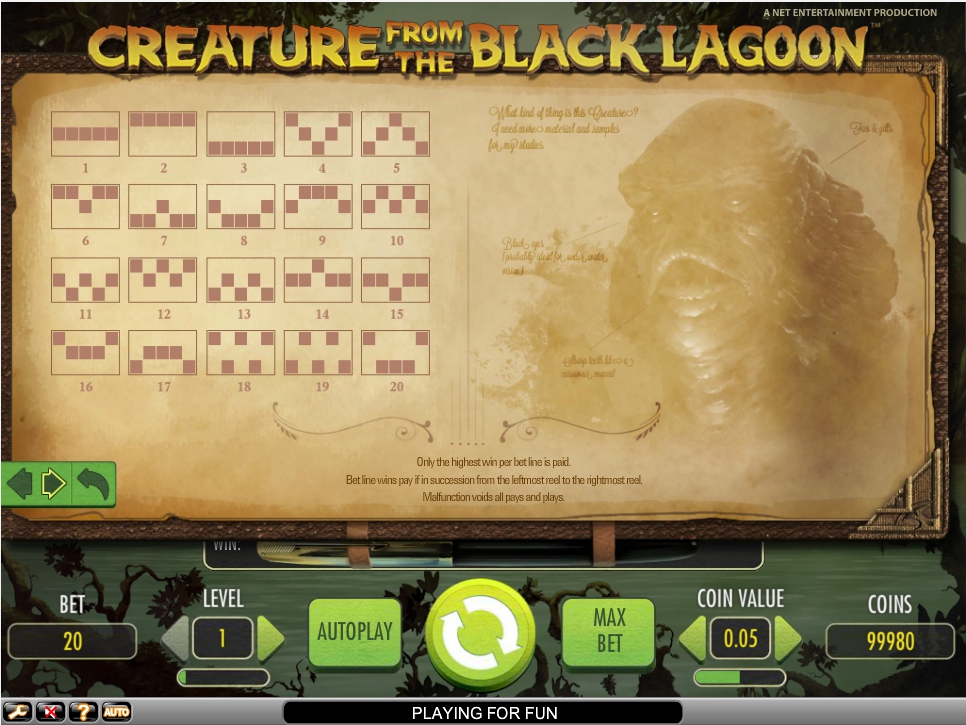 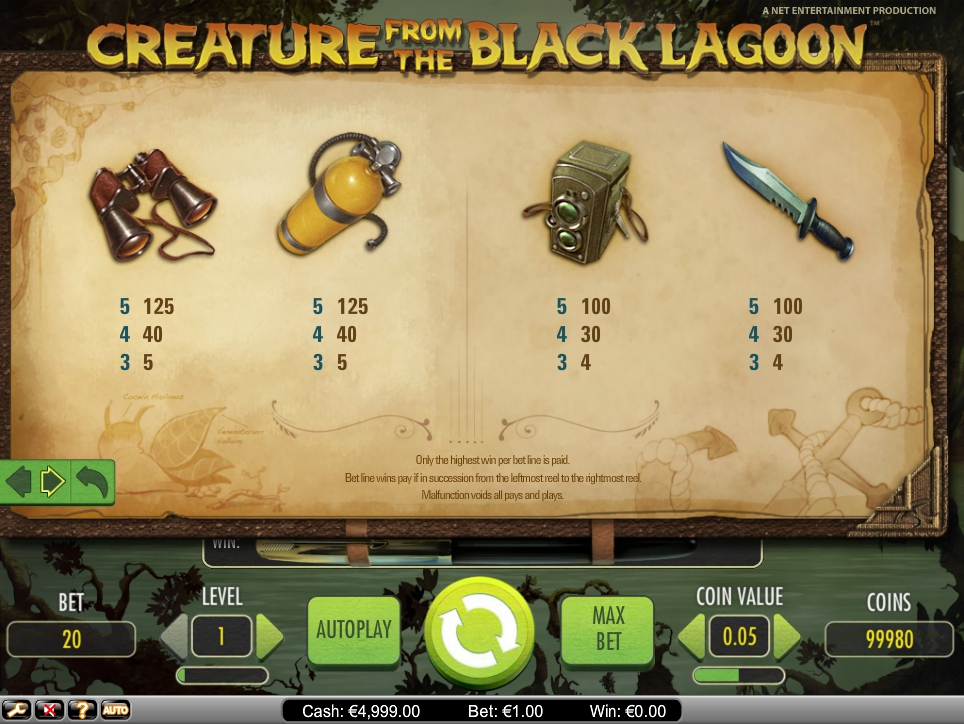 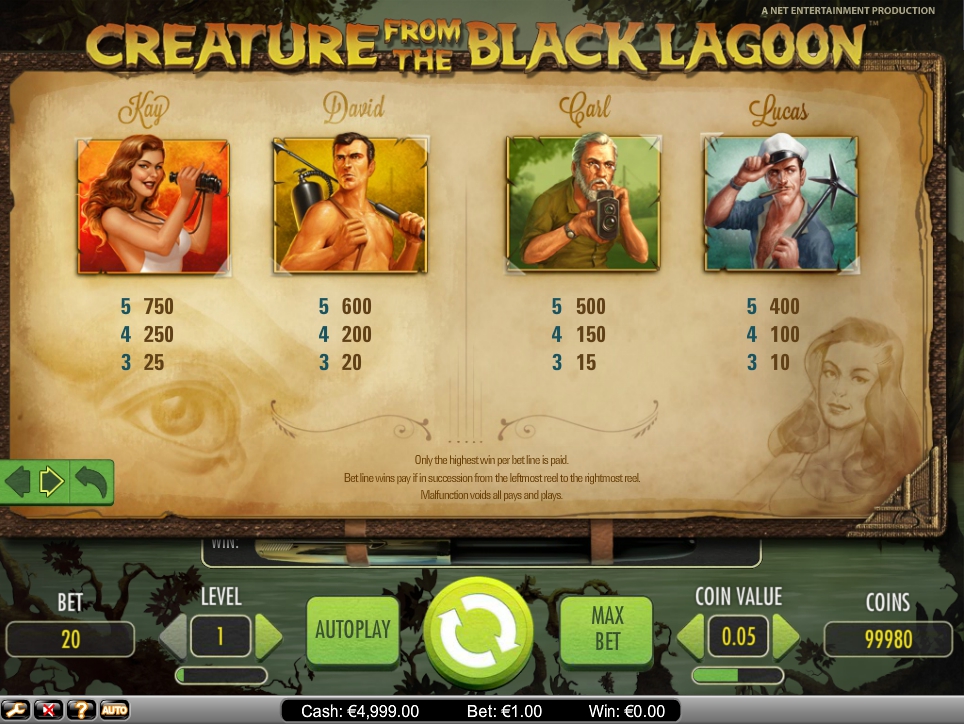 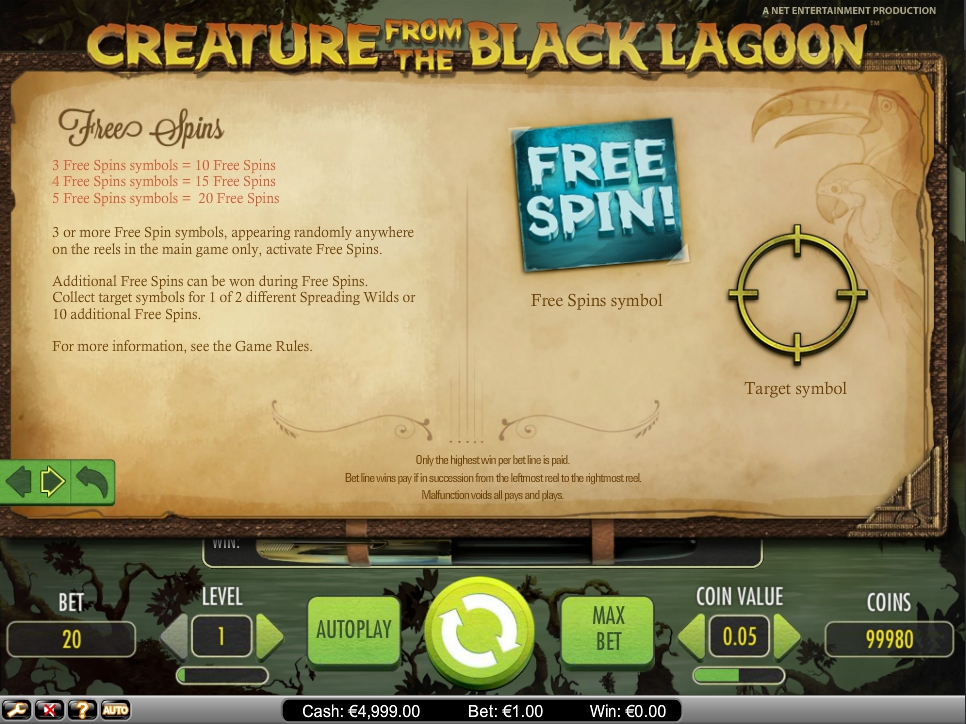 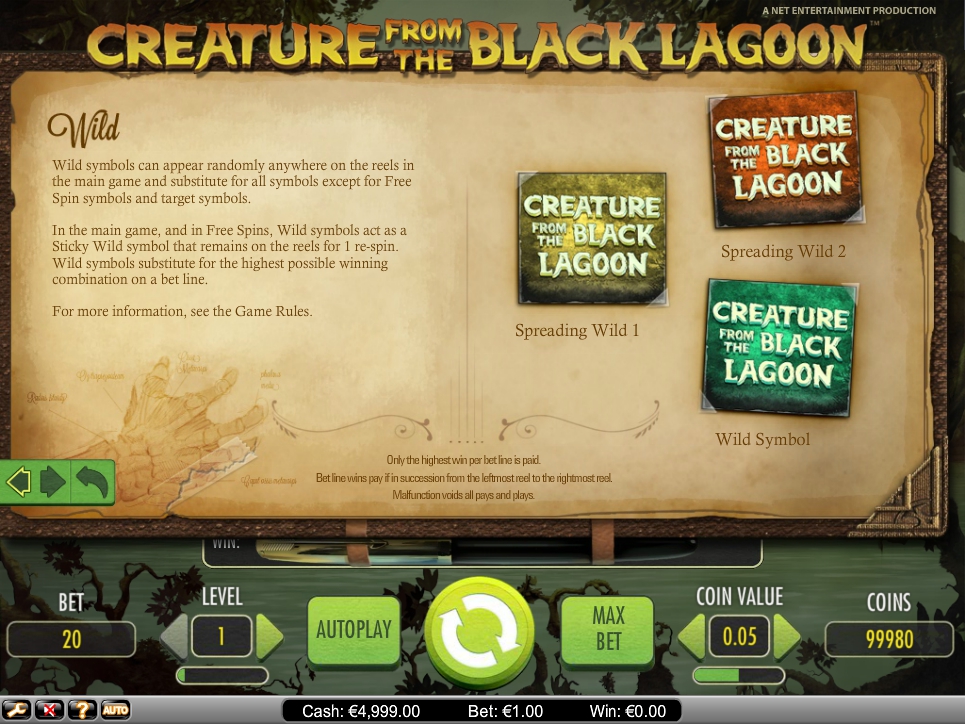 The manufacturer team from NetEnt, working with Universal, created a wonderful video slot called Creature from the Black Lagoon. As we see, the machine was based on the film with the same name. In 1954, one of the founders of the horror genre did appear on the screens with the presence of an unusual monster – the first of a series of films about the mysterious person-reptile Gillman`a.

The film is recognized as a classic of the genre, and most modern ideas such as “Alien” and “Predator” were taken as the basis for the launch of the Universal Studio of the 50’s. The plot of the video slot, as we see, is very simple: a research expedition is sent to the Black Lagoon, then a strange creature takes the girl with him, and the rest of the team must save her. The slot carries with it its simplicity and entertainment.

The interface and gameplay of the online–game will please the players with spectacular symbols, bright animations and convenient controls. The musical accompaniment is unobtrusive and corresponds to the mysterious theme of the slot. Collect combinations can be from the characters of the protagonists of history and additional equipment!

Management in the game is as intuitive as it is in all Net Ent’s projects. The informative panel at the bottom of the screen will help the player adjust the Coin Value and select a suitable bet (Level). All lines in the slot are fixed in the amount of 20, but loyal ranges of rates give the opportunity to select an individual strategy for the game.

You can set a certain number of automatic rotations using the AutoPlay, and set the marginal rate through the Max Bet. The Info button will familiarize the player with all payout ratios and features of additional signs.

Still even with a paytable like this the game has the potential for a descent payout thanks to the wilds in the game and the round of free spins. There are 3 wild images you will find here, including spreading wilds. A great feature in the video game is that during basic game if a wild image lands on the reels, it remains on that position for 1 re-spin.

If you get another wild in the next spin it also stays on its place and you get another wild. This way sometimes you can get 4-5 wilds on the reels and if they are in the right places you get not one but two big wins thanks to the re-spin. Despite the main prize of 750 coins, the online game will give an unforgettable experience and a rush of adrenaline.

Champion of the Track