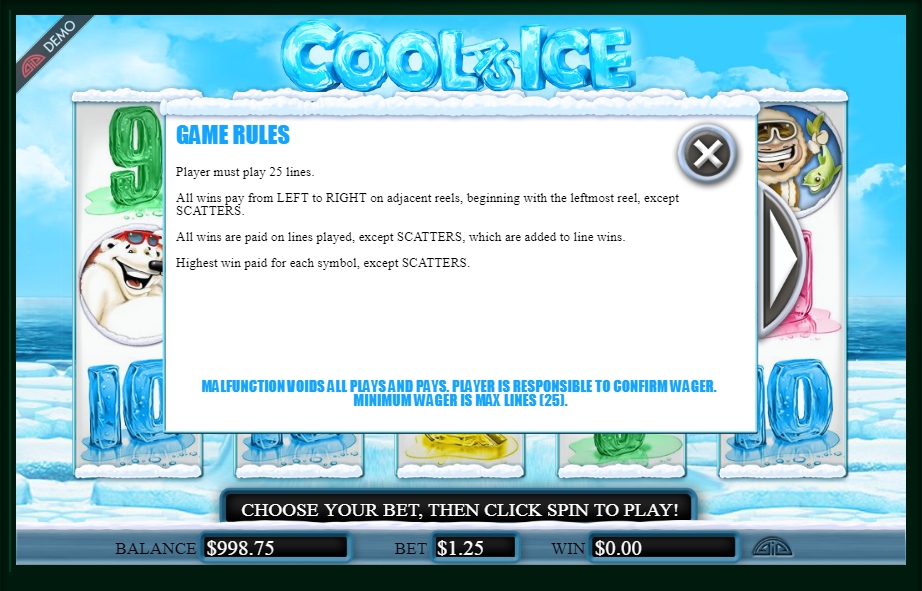 The Arctic is the most unusual region of our planet and it is not surprising that it is called mysterious, because it does contain many different miracles. Cool As Ice, presented by Genesis Gaming, offers the user to get to know the happiest inhabitants of this continent. Among the cold and constant ice, they found a way to fill their lives with merriment. Huge glaciers and endless waters of the seas give a unique entertainment. To get to know the characters more closely, the participant needs to become an Eskimo for a while.

This online game was created in a very interesting style, which uses elegant graphic elements and thematic music, allowing players to cheer up and enjoy the gameplay a little. All the characters in the game fully correspond to the slot theme, which creates an even more mesmerizing atmosphere for the game process. This is the five-drum machine; active lines can be used no more than 25. Above the game drums the name of the game is placed.

The control panel is themed, the buttons resemble blocks of ice. Here, users will see the latest winnings, current bets and many more interesting. This online game is a unique version of modern video slots, and the main difference is to give players the opportunity to independently choose from a set of available functions.

Depending on which of the suggested sets will be chosen by the player himself, his bet in the further game process will change. In order to set a bet in the game, users need to vary the parameter Line Bet. As for active lines, they are constant here.

Players will never be bored with the slot, because it is equipped with the most interesting sound and graphic effects that revitalize the game and make it more similar to reality.

A fishing hole with the word wild coming out from it is the wild image in the game. It will substitute for all the symbols except for the Scatter. When more than one wild substitutes in a win, the highest prize will be paid out.

The Scatter here is the game logo, and it can appear on reels 2-4. When 3 of such pictures appear on these reels the Free Spins feature will get triggered. Gamers will be taken inside of an igloo, where they will have to pick sunglasses in order to get free spins. The spins will be added together, and you can keep on picking glasses until you run into a pair of glasses that hide ‘Collect’. Once you do, the picking game will end, you will be taken to the base game, and free spins will ensue.

This game possesses an Iceberg Wild symbol which can appear only on the reel no. 3. Once you hit it, the symbol will expand to fill in the whole reel. However, the symbol can also expand to the adjacent reels 2 and 4 giving you even more chances to form a winning combo.

Ice Fishing feature is triggered when you hit the Ice Block symbol on the reels 2 and 4. When you do, an Eskimo will wander onto the reels and break the ice creating a fishing-hole. This will reveal a symbol which can bring you a prize which will be paid immediately.

The Husky Racing bonus feature is triggered when you land a Husky dog symbol on the reel no. 1 and the sled in the same row on the reel no. 5. In this feature 3 pulling sleds dogs will race across the rows leaving Wild symbols at random positions. After this, the reels will be re-evaluated for any new potential wins.

Yggdrasil The Tree of Life