You can not play this game for free
For free slots game go
Play free
or
(28 votes)
Game Played: 9
Full screen: close 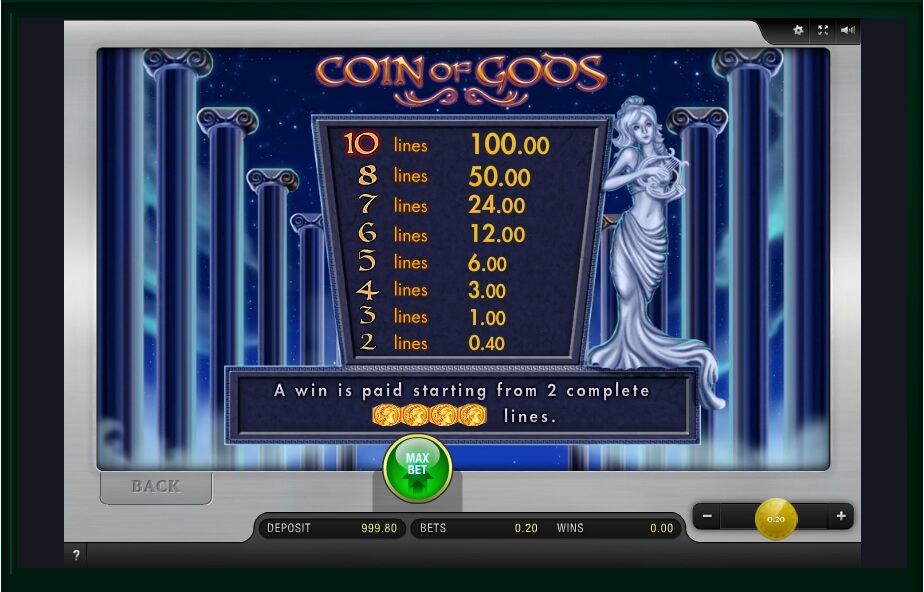 Every user likes the themes about the ancient Greek gods who surprise with their strength and power. Therefore, each provider has several similar products in its portfolio. The young Edict (Merkur Gaming) company is not an exception, as it presented a video slot called Coin of Gods. The developers said that players are waiting for an exciting adventure in a mysterious city that is somewhere in Greece. The color of this country was transferred using modern technologies that were used in all aspects of the slot.

Considering the graphic design of the slot machine, the participant can understand that he/she is in a mysterious city where all the actions of the game unfold. In the background there is a beautiful landscape that describes a beautiful city. Here, every detail was made with the help of modern 3D technologies that help to immerse in the atmosphere of the game. The developers have perfectly beaten subjects devoted to myths of the Ancient Greece and have successfully embodied it on 4 reels and 10 lines of payments.

In the game players will be able to find on the game board a lot of thematic characters. By the arrangement of the elements, the video slot is presented in the traditional form. The playing field takes up most of the screen. It is surrounded by columns that are characteristic of the past era. The control panel is at the bottom as usual.

The world of the gods lives according to its rules which are described in the theoretical section. The participant needs to open the “paytable” tab that will tell about all available symbols and their features. Now you need to return to the main screen to place a bet. Press the “+” and “-” buttons of the “Bet” function and select the value of the indicator that is consistent with your budget. Note that the grand prize (2,000,000 credits) is available only during the game at the highest bid. The user needs to press “Max Bet” to put the highest score.

The “Spin” button starts the manual play mode. If the player wants to enjoy the storyline and the beautiful scenery, he/she should press “Autoplay” by setting the number of continuous spins. The set of pedestal settings includes the setting of sound effects and the parameters of the screen. Button with “?” opens the reference section.

This manufacturer always adheres to its traditions so Coin of Gods guarantees a diverse and lucrative gameplay. The participant should try to catch several identical symbols in order to win real money. After it happens, the winnings will be credited to your account. This slot was also adapted for modern mobile devices. Now customers can enjoy their favorite games at any time. You just need to connect the gadget to the Internet and visit our website.