You can not play this game for free
For free slots game go
Play free
or
(28 votes)
Game Played: 4
Full screen: close 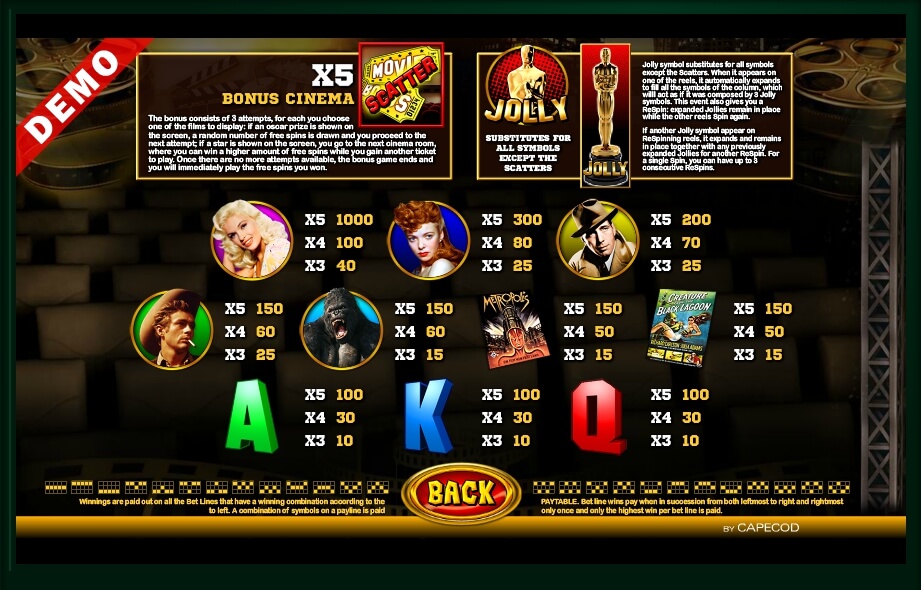 Everyone loves movies: horror or drama, comedy or western, there are films on all tastes. That’s why Capecod Gaming invites you to the Cinema online slot. It is worst knowing that you are a really lucky person because you will see classic legendary films, the best ones in the cinema history. Besides, the developers prepared a lot of prizes and bonuses. So grab your popcorn, a can of cola and quickly begin to play in this slot machine.

The game is high quality, made in HD size, symbols are bright, realistic and colorful. In the background there is a cinema hall with highlights, a film projector and usual goodies – popcorn and cola. Enjoy your movie! And don’t forget to play and earn real money. So let’s see, what we have on our playing field: two tickets with a movie bonus, the Oscar, two films to choose from – “Metropolis” and “Creature from the Black Lagoon”, actors and actresses from the past, the King Kong and card icons (usual for slot machines).

The gameplay is rather simple, the player doesn’t need to download something because this game is complete online. There is no registration as well. Firstly, place a bet from 0,01 to 1,00 and then click on the Spin button. There are 25 lines in this slot, and unfortunately we can’t change its number. Don’t forget to look at Credit and Win windows to know, how much you have earned or lost.

There are subsidiary buttons that the player need during the game – Max Bet and Autoplay. If the gamer likes to play 24 hours a day, Autoplay will be useful. Max Bet can bring a lot of real money, but in the same time, you can lose everything and continue playing. To get a winning combination the gamer should collect three, four or five same symbols. In this case he/she will be awarded with payouts or bonuses.

The most valuable symbol is a blond actress, she may bring 1000 payouts maximum, the least important are card icons, they can bring only 100 payouts maximum. There are 2 extra symbols: Scatter and Jolly. Scatter is 2 tickets for bonus free spins, and Jolly is the Oscar, that will be awarded only those, who get a winning combination with it.

The player will have 3 attempts to choose a film: if there is Oscar on the screen, the gamer is awarded with free spins, if there is a star, he/she goes to another cinema hall, where it is possible to win more free spins.

Other Games by Capecod