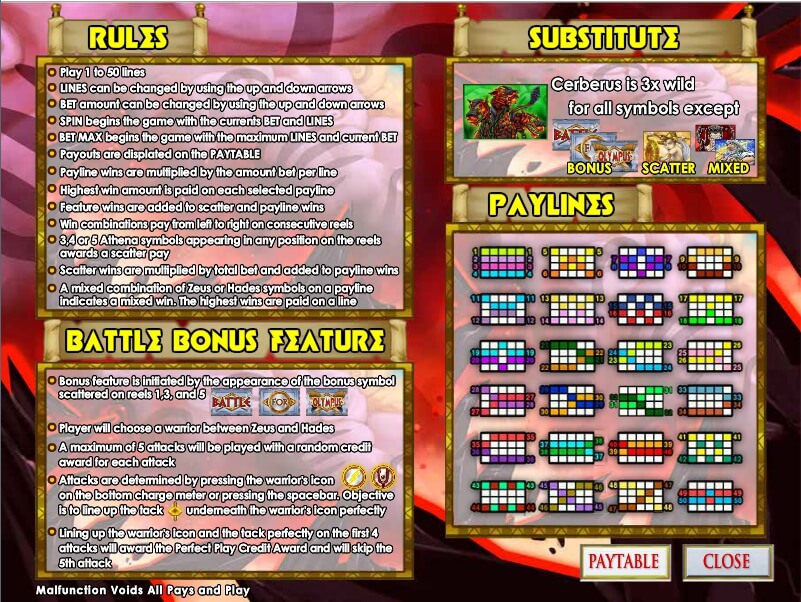 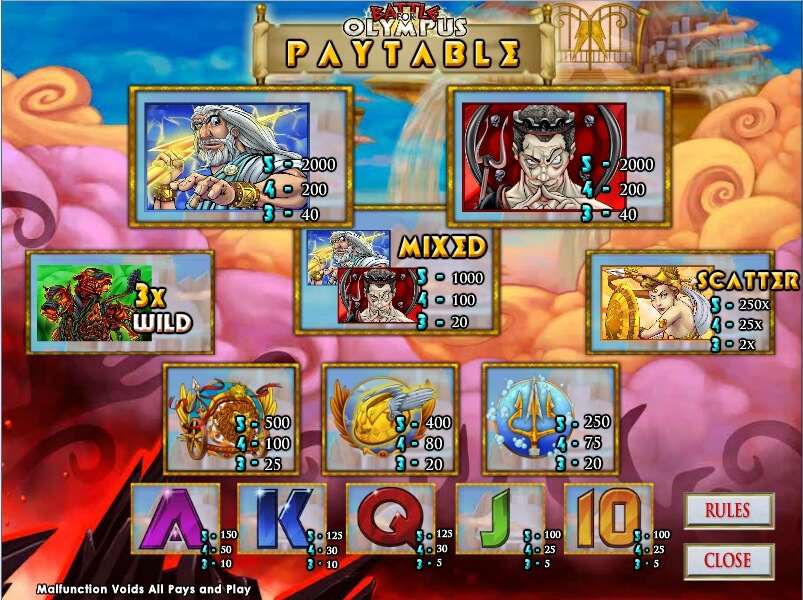 As you already guessed from the name of the video slot, the theme of the game is Greek mythology, namely the famous mountain of Olympus where the powerful gods live. If you are a fan of virtual models, then you know that such models are very popular today. This is due to the fact that it is interesting for a person to observe the life and adventures of the Gods. The Amaya (Chartwell) company knows this and therefore created a unique product called Battle for Olympus. So turn on the video slot and enjoy the exciting adventures!

It is worth noting that here the attributes of the pagan world are played out with the help of animated graphics. The developers tried to make the game interface modern and high-quality. All figures, background, table and menu are detailed, qualitatively traced and processed.

On the left side of the screen, you can see the interpretation of hell, on the right side there is a paradise. This alludes us to the eternal confrontation between Zeus and Hades.

The playing field with 5 reels and 50 active lines is transparent, so we can enjoy the beautiful scenery. Here we can see pink and orange clouds. This means that we are on the top of Mount Olympus. In the distance, there are large gates that open the way to the paradise.

At the bottom is the main control panel of Amaya. Management in the game is simple, standard for many slots. The rules of the game process can be understood even by beginners. The process of playing the slot machine is dynamic, offering a lot of novelties. These details attract the attention of users.

But first we dissect the singularities of the basic game. There is everything you need to fully control the process. So, the main button called SPIN starts scrolling the drums, next is the BET MAX function, which sets the maximum values. Using the LINES and the BET function controls, you can set the indicators for one round. There is also an automatic rotation function here.

Pay attention to the PAYTABLE tab that contains information about the payments, rules and features of the online game. Clicking on ADVANCED will display the basic settings of the game.

Wild (angry Cerberus) is not paid, but it can replace other pictures. Payments for combinations with wild will be tripled. Scatter is beautiful goddess Aphrodite who can appear in any position on the screen. In addition, this symbol can give the player an additional multiplier. Bonus is three pictures with the name of the game that activate an additional mini-game.

The user moves to a separate screen. Here is a duel between Zeus and Hades. You need to bet on one of the gods, and then the opponents strike each other. The selected character attacks after pressing a special button. The level of damage can be different, and it depends on when the player clicks on the button. Payments will be assessed for each blow.