You can not play this game for free
For free slots game go
Play free
or
(22 votes)
Game Played: 15
Full screen: close 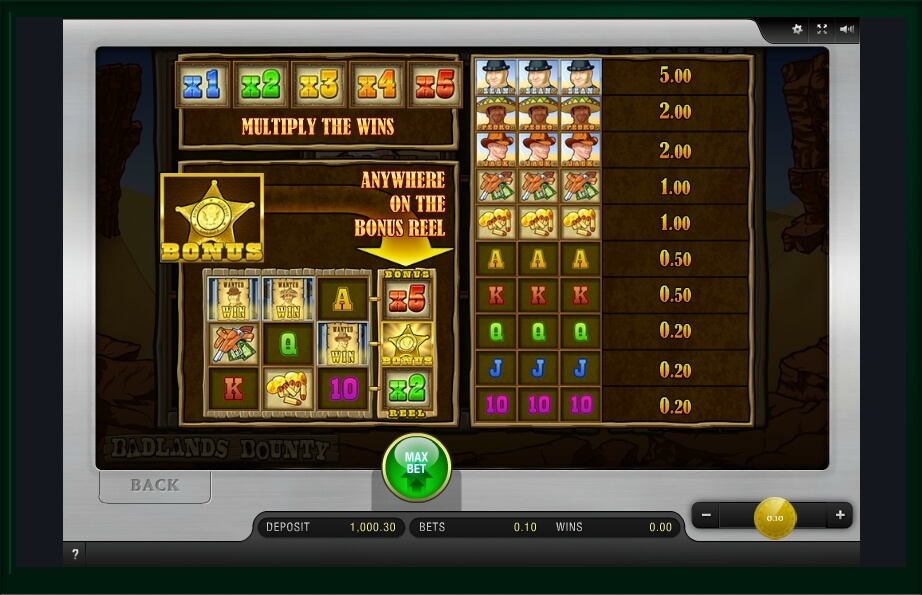 Each manufacturer at least once addresses the topic of the dangerous West. Such popularity of this theme is caused by stunning stories that are filled with shooting, chasing and money. Of course, the Merkur company could not miss a chance to replenish this category with its slot machine. It is called Badlands Bounty and offers to get acquainted with the warmth of cowboys who protect their territory from bandits. It’s amazing that in a short period of time the video slot could attract a large number of customers and get many positive assessments.

After the game starts, users will be convinced that they have moved to the wild West. A stunning blue sky with clouds spread over the “golden” sand. In a word, in the background there is a local landscape that will help you to immerse yourself in the atmosphere of the game.

In this gaming machine, the participant will be greeted by three brave cowboys that will tell he/she where the lost treasures are. The designers and programmers have spent a lot of time and made effort creating this slot game. The musical accompaniment also helps create the suitable atmosphere of the wild west and at the same time it does not detract from the game session.

Of course, the basic actions of the game unfold on three reels that work on the structure of 3×3. The symbols of the video slot are matched to the theme. Beginning to play will be very easy even for a beginner, since the interface in the game is intuitive, the control is standard and extremely simple. The main buttons with which you can configure the basic settings are at the bottom. The “bet” key may suggest making a bet that the result of the round will depend on.

The number of lines can not be changed. A large button starts the spinning in the normal mode. At any time the participant can activate the automatic mode, but first, he/she needs to set the number of such spins. To survive in the Wild West, the user needs to know the local rules. To do it, go to the “paytbale” tab that contains information about the rules, symbols and the corresponding symbols.

Having studied the table of payments and running the game process, you will be pleasantly surprised from the large number of paid combinations. If the same pictures appear on the screen, the corresponding amount will be credited to the user’s balance. Thanks to these features, the game is dynamic and interesting.

Every client of our website can go to the West in the demo mode during which virtual bets are available. In addition, this is an excellent chance for players who first visited such an institution. But in this case, the participants cannot win real money (up to 1000 credits). Thanks to the additional settings, your gaming session will be comfortable and profitable.