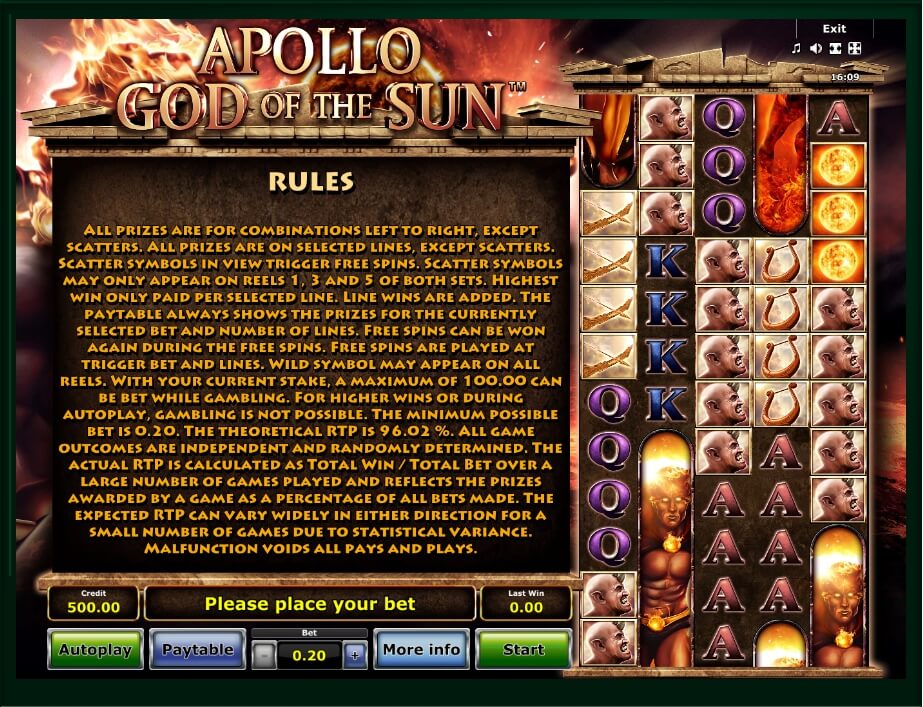 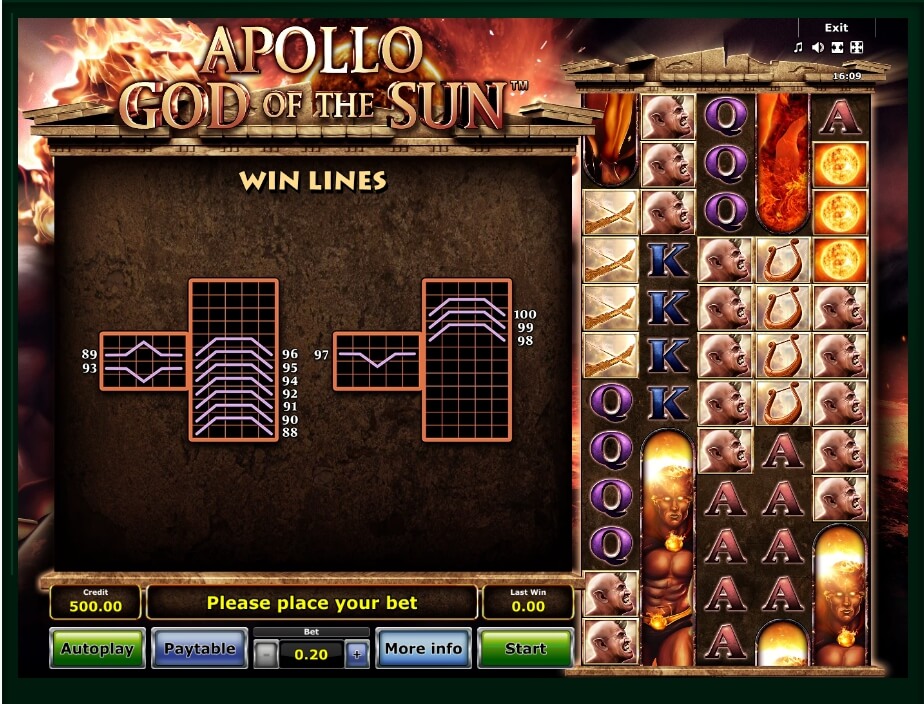 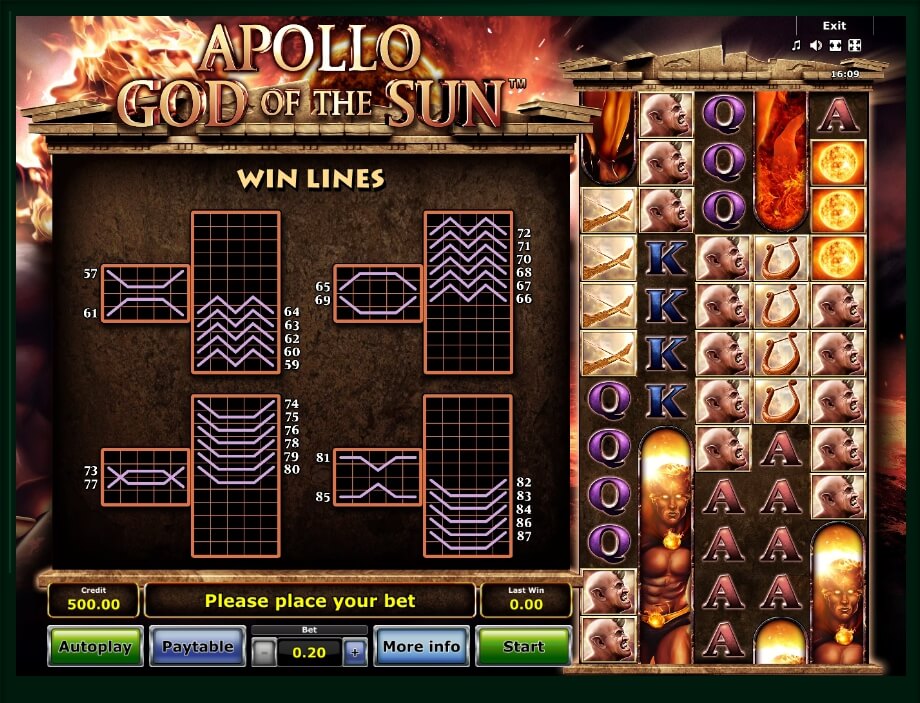 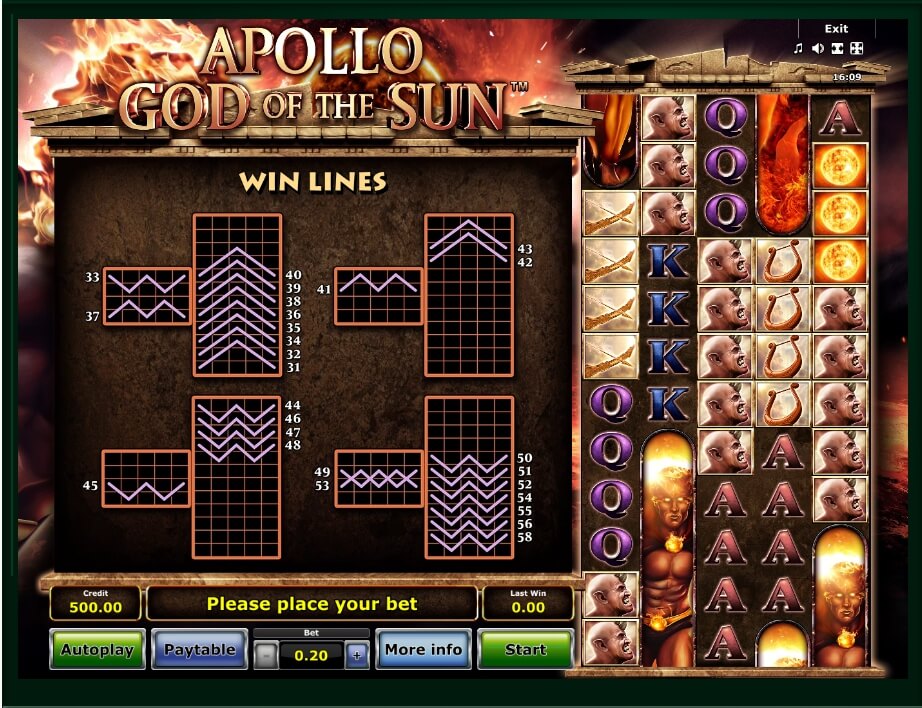 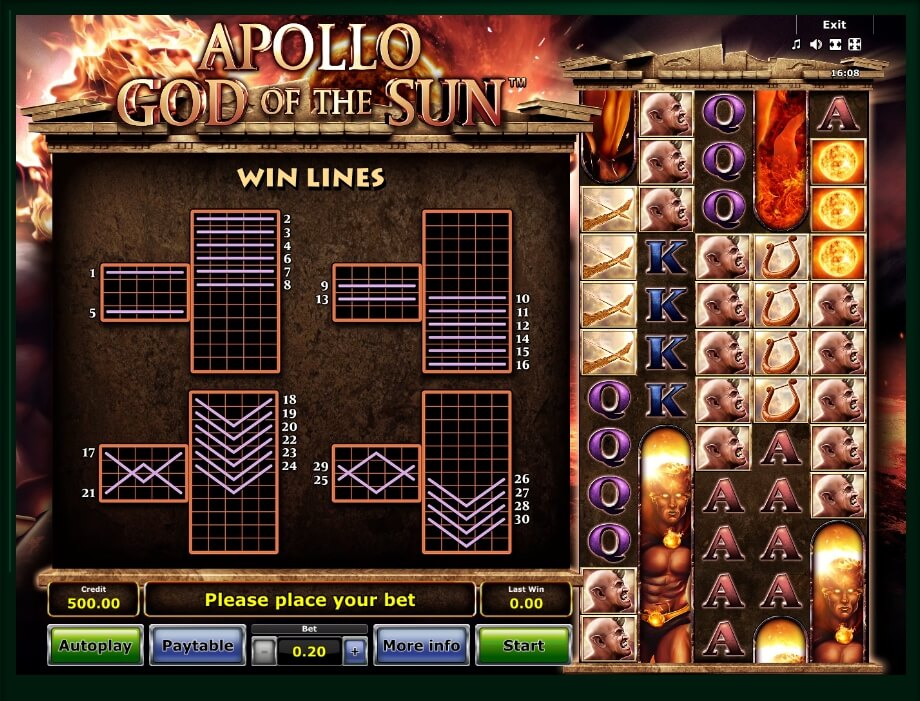 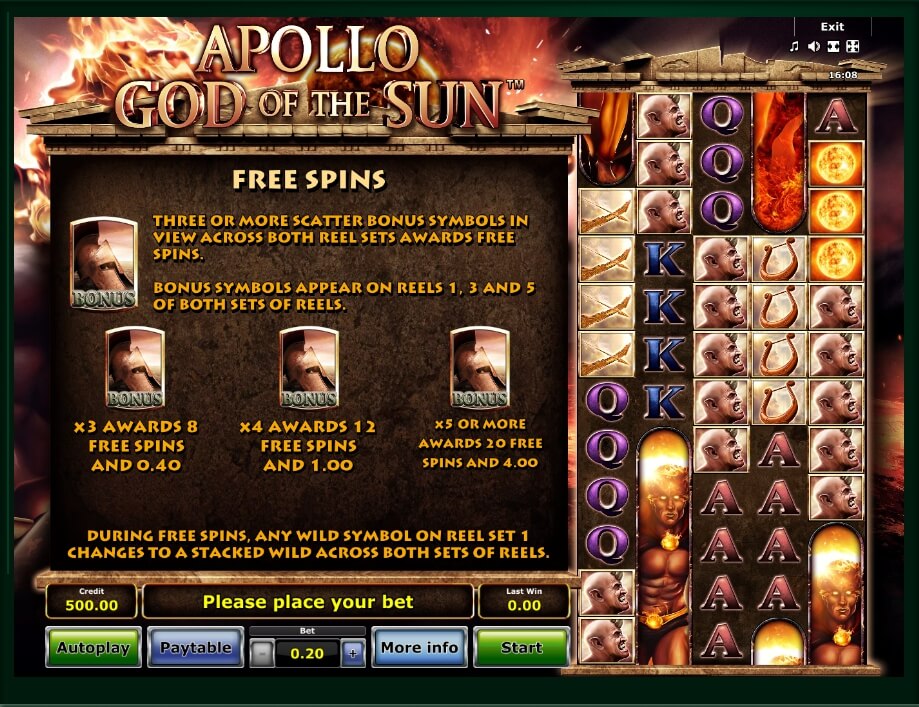 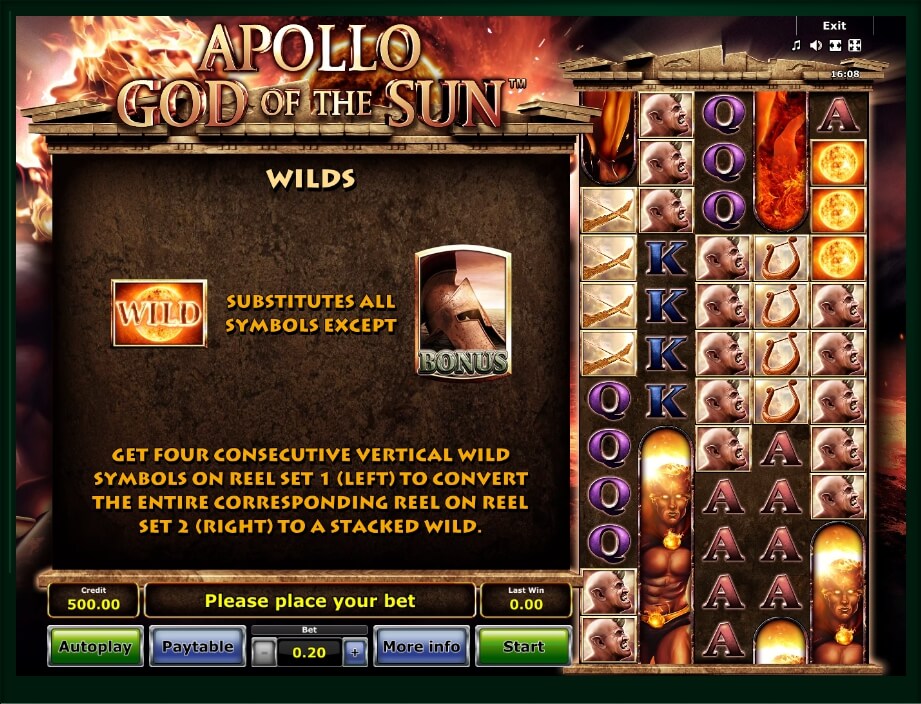 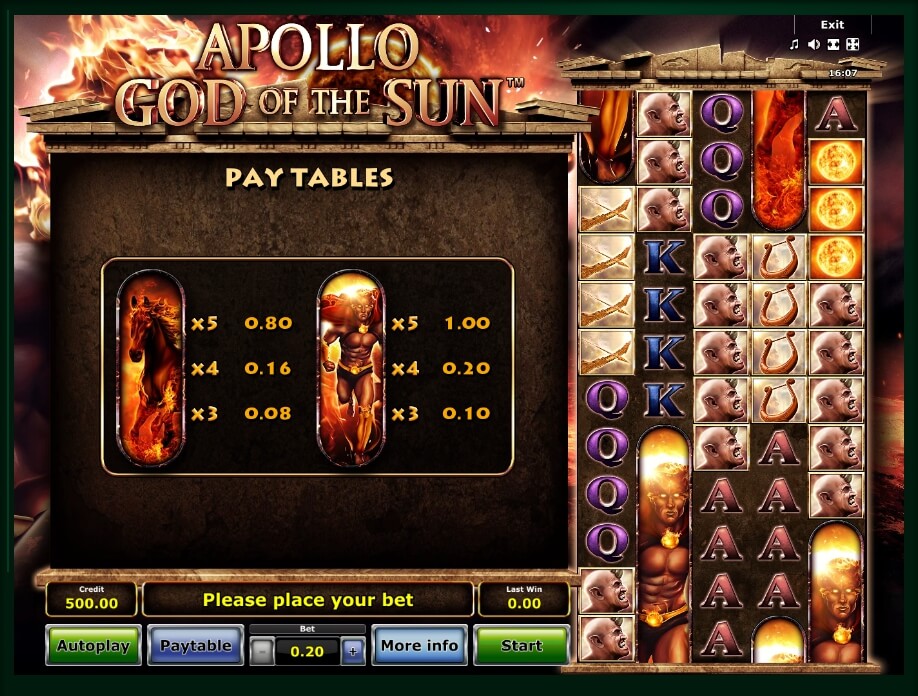 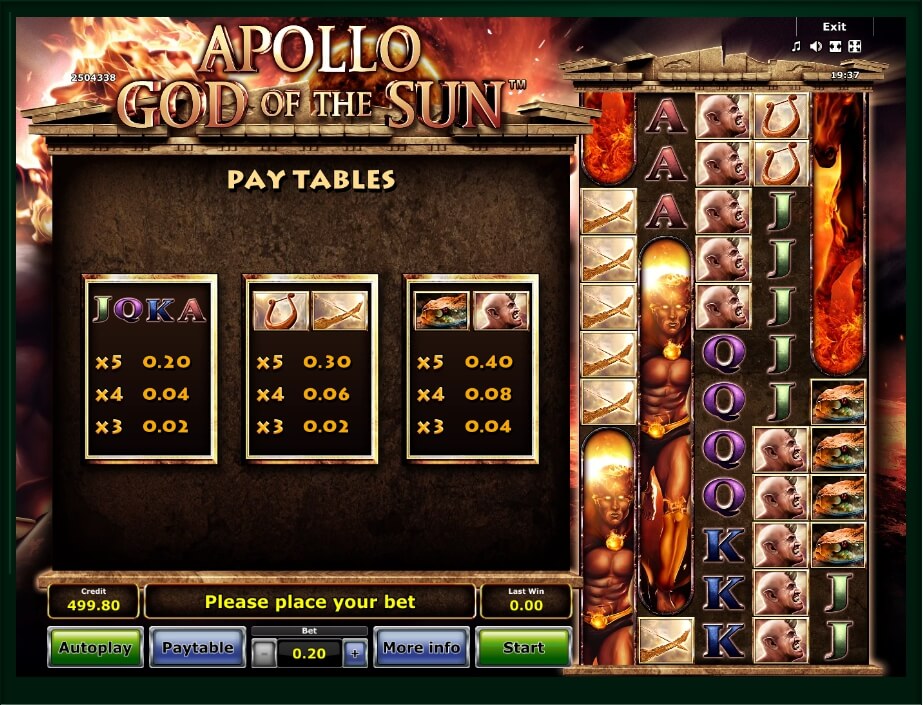 Ancient Greek myths tell us about the powerful Gods that control people and the course of history. We also met Apollo who has the power of the Sun. According to the legends, the dawn comes after this god rides on the golden chariot across the sky. The image of this character is very common in the culture of Greece. So he is portrayed everywhere and even in the Apollo God of the Sun video slot from the GreenTube company. This brand has released many slots that occupy a leading position today. Finished this product is no exception. It describes the brutal battle between the gods. Such a plot is more like a fantastic film.

The main plot in the presented video game tells about the dark side of the sun god. In the myths, he is represented by a kind and friendly guy who gives people joy. But no one knew that Apollo could be cruel, mighty if he was angry. So it happened during the war that took place between the Gods of the whole Olympus.

After the game opens you will see a fantastic picture. We have no words to describe this. In the background there is a volcanic eruption, lava flows and also the sun whose power is concentrated in the hands of Apollo. Here, also the God who is preparing to strike at his enemies is depicted. Such an atmosphere of the slot machine is supplemented with fantastic animations and 3D effects. The musical accompaniment is professionally chosen.

This video slot has a structure that is not typical for the products of this provider. In the center there are 2 playing fields. Each of them has 5 reels filled with thematic symbols. The control panel consists of several buttons. Since all the lines are fixed to the player , you need to click on the Bet button and make a bet.

But you need to visit the section with the theory before that. Click on the Paytable button that opens access to the paytable and instructions. The Play and Autoplay buttons launch different game modes. In the upper right corner there are additional options that adjust the sound and quality of the display. With the help of all the above options you can make the gameplay convenient. The developers have fully disclosed the topic of the battle.

Let’s talk about the functions of the Gamble button. It will be active after the paid chain appears on the screen. It will suggest doubling the payment in the risk-game according to classical rules. The prize can be increased and lost.

The user can ignore this offer or disable it in the settings. But the video slot can offer additional symbols, such as: wild and scatter. The first one replaces images that do not have special functions. Scatter is designed to activate the round of prize spins.

During this mode, the player can win valuable prizes and real money (up to 100.00 credits). As we can see, the slot game can offer many bonuses and special offers. Such a game session will give a lot of emotions and impressions.