You can not play this game for free
For free slots game go
Play free
or
(5 votes)
Game Played: 71
Full screen: close 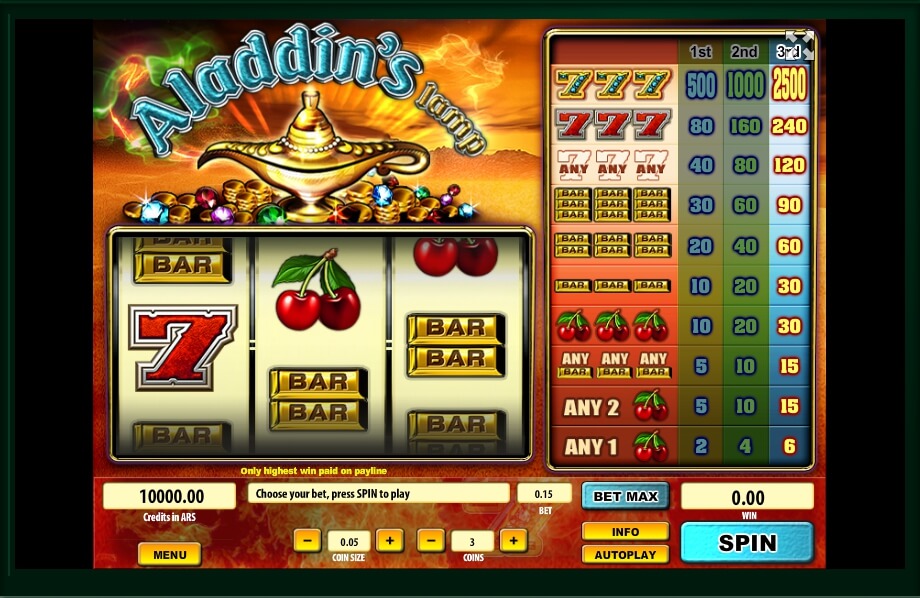 There are a lot of fairy-tales that describe a hero on his quest for glory and wealth. May it be Garrett, or Ali-Baba, or someone else, every time we have a young street rat, an orphan usually, who is deadly starving and want to find something better than his life could offer.

The same case was with Aladdin, a young guy who decided to go on the trip into the Cave of Wonders in order to find a mystery lamp that promised him a lot of treasures, and some unique artifact with which he could obtain whatever he wanted.

And that thing was no mere than a lamp with a genie inside. The moral of this story could be easily re-told for casino gamblers, because here is all the same: you want some fortune, depend only on your luck and you are ready to go with high stakes.

No wonder that as a result, the Tom Horn Gaming slot development team created an arcade video slot named Aladdin’s Lamp, and, that is it: every gambler all over the world now has an opportunity to their draw three wishes. Now let us see what is inside.

As for the core gameplay, Aladdin’s Lamp stays really faithful to the classics. First of all, here are 3 reels of 3 rows to spin around, and a little number of paylines to make combos. The symbols themselves are strictly limited to classic choices, such as cherries, jewels, various ‘7’, including red one and bejeweled one, and a gold bar. Each of the listed symbols has its own paytable.

The success of the spin depends on the combination you receive on the payline, putting into attention the fact that only similar symbols can match each other, and nothing else. Aside from that, there are no wild symbols, no free spins, and even no score multiplier. Only a jackpot that may come in handy if you really are lucky enough.

Yet, there is the autoplay option that might help you to relax. Once your bet is placed, just sit calmly and watch the reels spinning for you.

Offering almost no special bonuses, the game presents a fascinating 2500-credits jackpot that can be converted into actual casino currency during a withdrawal stage.

Other Games by Tom Horn Gaming