You can not play this game for free
For free slots game go
Play free
or
(9 votes)
Game Played: 0
Full screen: close 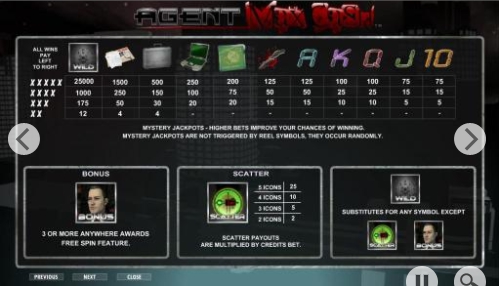 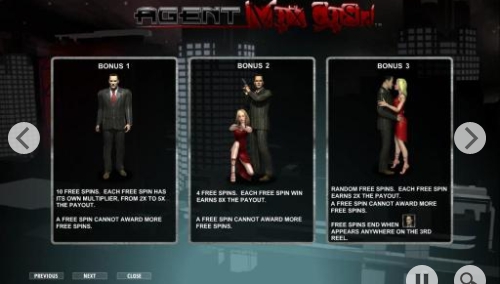 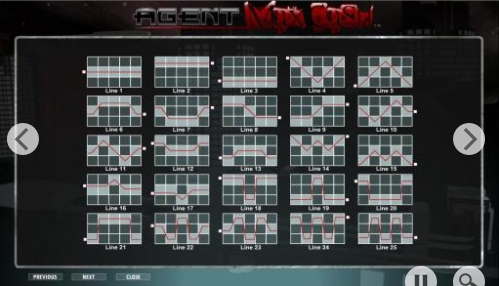 The Agent Max Cash casino is the type of game, that is based on the numerous of classic spy movies. Developers from the Amaya Studio have tried to create the perfect atmosphere of the 20th century. The player can see that even by looking at the characters. They are vintage. The main hero is the spy in the expensive costume, and his partner is a sexy blond girl. Both of them are trying to protect the world from the terrorists, that want to destroy the government of every country.

Designers of the game did an amazing job by creating the whole new universe with its own rules. Every slot on the gaming reel can tell its own story. Besides, the gamer can launch the Agent Max Cash online on any device. It can be not only the personal computer, but also the smartphone, tablet or anything like that. User interface and the gaming process were adapted to work with touch screen. It is time for the player to enjoy the game for free. Because the project contains the demonstration version. It has the standard elements of the regular project.

This game was created specifically for those gamers, who have zero experience in such projects. After the first launch, you will see the notification about the rules you should follow. You cannot go forward and play, without customizing the gaming process. In order to do that, use the special panel right under the gaming field.

Click on the “Paylines” option, if you want to change the line on which you are going to play. Do the same thing with the “Credits” section, to change the amount of money to put at the stake. It is the only way to regulate the level of risk.

However, if you want to make the gameplay much easier, use the “Auto Spin” option. This function allows the game to bet automatically. Portable gamers use this function regularly.

Because, after activating it, you don’t have to focus on the gaming process that much. For the risky players, there is a function called “Bet Max”. It raises your bets to the limit. So think twice, before you use it.

The player can’t win much money without the use of bonuses. It’s pretty easy to get them. The player just needs to collect matching slots on the same paying line in order to do that. If the player will combine at least three similar items, then his winning score will be doubled.

You can get better profit by the use of special slots, such as the Scatters. Land a couple of them and you will enter the mini-game for the jackpot prize.