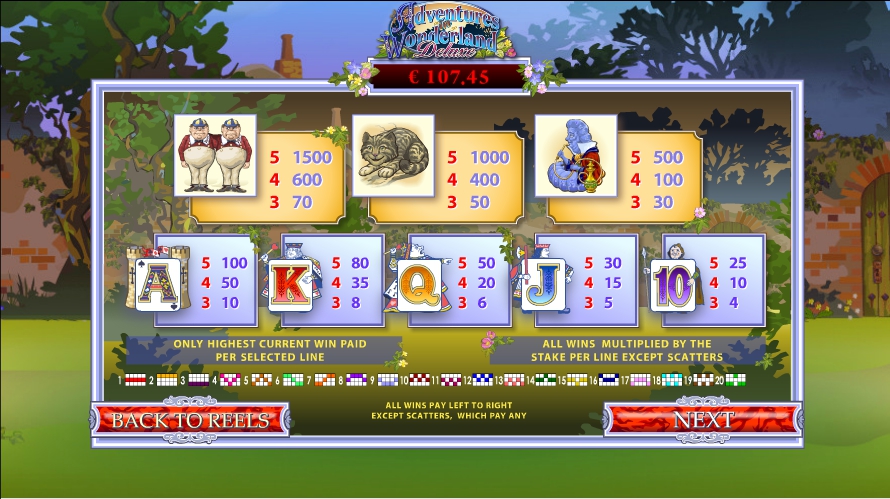 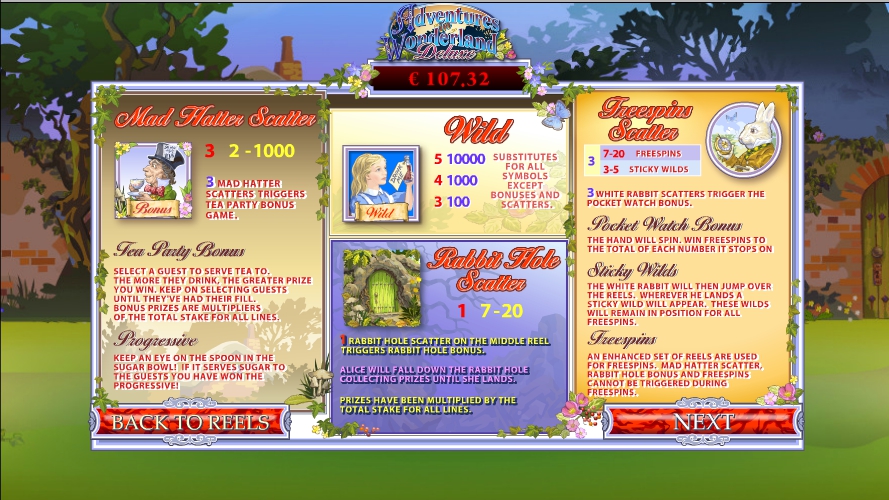 For many years, humanity has been amazed by the extraordinary fairy tale created by a famous English writer. Works about a little dreamy girl Alice strike the imagination of both adults and children. In addition, there were created lots of various films based on the plot of the books about Alice. Moreover, the developers of slot machines also decided to join the work on creating their own Wonderland. Therefore, the Ash Gaming Company released the slot called Adventures in Wonderland, based on the motives of the fairy tale.

The game process takes place against the backdrop of the entrance doors to the hare-house, which resembles the plot of the cartoon. Bright thematic graphics, a presence of fantastic characters and qualitative animations create a style of the game and make it most similar to the book.

The game also contains a musical accompaniment, which provides the atmosphere of the fairy tale and a mystery. First, a user should visit the PAYTABLE section, which contains a detailed information about each game symbol and paytable.

Next, the user should determine a size of a suitable bet for the game. The betting can be done by the STAKE UP and STAKE DOWN buttons. The maximum bet that can be fixed on one active line reaches 10 coins. The second regulated game index is a number of the game rows. In general, you can use 20 lines in the game.

To put the maximum number of lines in one click, a player should press SELECT 20 LINES. Then use the PLAY button, which rotates in normal mode. If the user wishes to play an automatic game, he needs to click on AUTOPLAY.

The most important thing we must know about this 20-payline slot is that it is the Progressive Jackpot game, which can be won in the Tea Party bonus, which is activated if 3 or more Mad Hatter characters appear anywhere on the reels in the mane game. Then we get an invitation to a tea party, where 4 characters like Alice or Dormouse are the guests.

An amount of your winning there depends on how long they take to drink their cups of tea. However, we also have to concentrate on a sugar bowl, as a spoon in it can serve to you a great Jackpot.

The game offers other two bonuses, which activate the Rabbit Hole feature if Scatter becomes visible on the centre reel, and then Alice falls down to the rabbit hole, collecting bonus prizes.

Mostly, this reward is around x10-x15 of the total bet. Three White Rabbit characters on the screen trigger free spins. However, before the actual play starts, the rabbit determines the number of free spins and turns randomly selected symbols on the screen that will act as Wild during extra session.

Who Wants to Be a Millionaire

Aztec Gold Fortune of the Gods