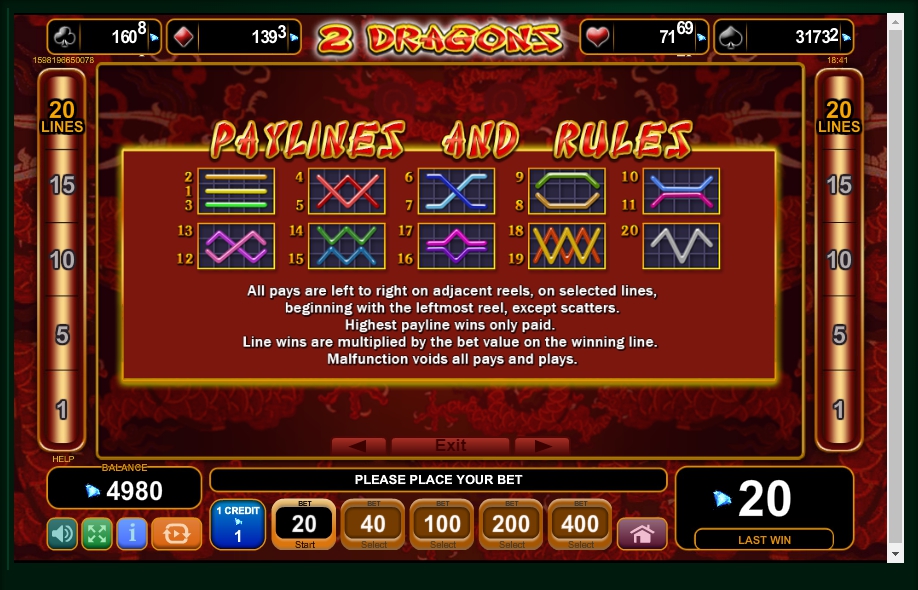 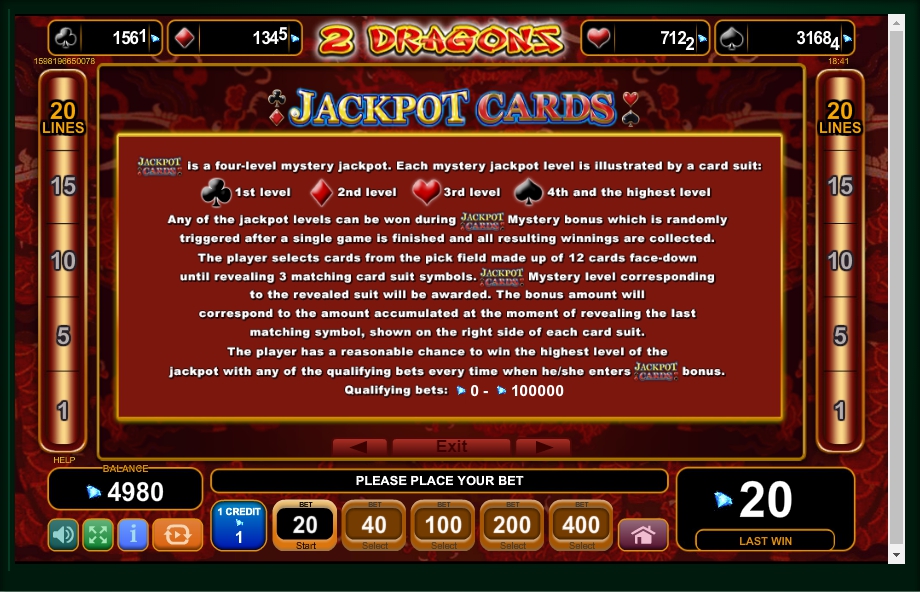 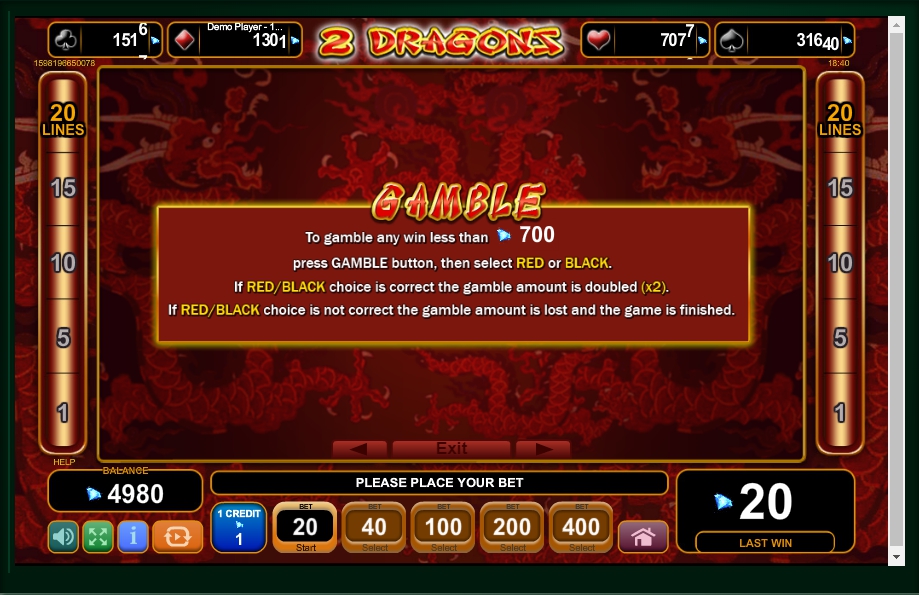 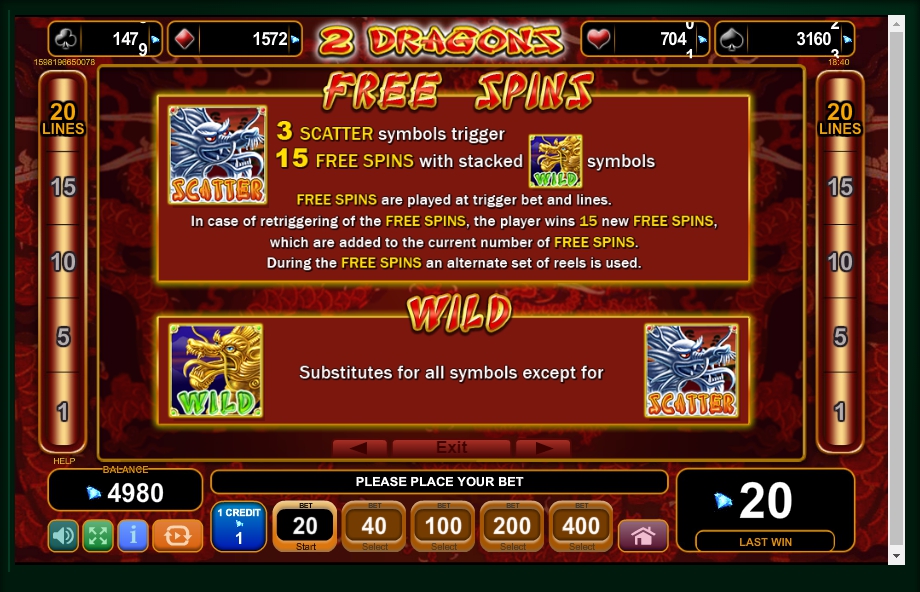 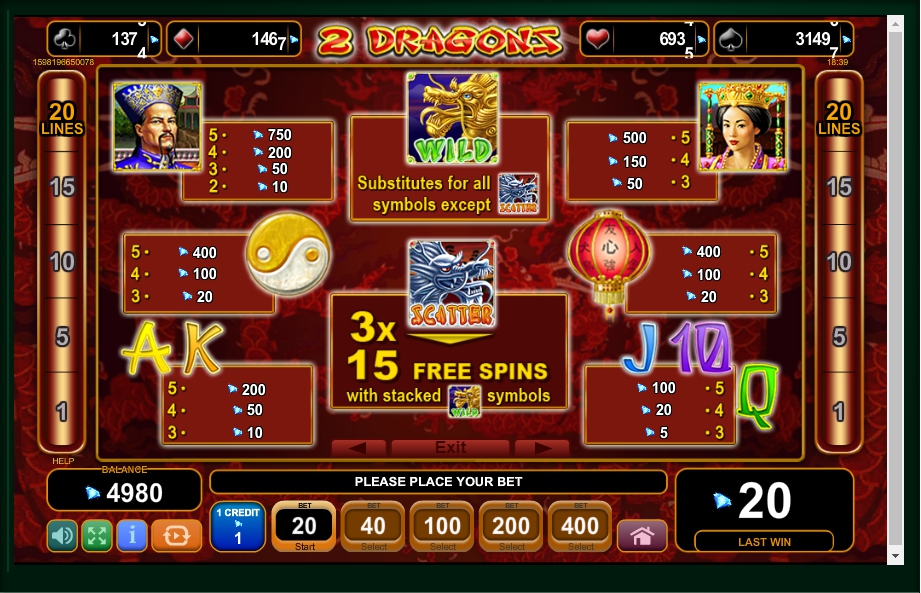 Asia is full of mysteries. A kind of mysticism differs Chinese culture, which originated thousands years ago. Rituals, traditions and customs accompanied, and continue to accompany the population of China. Since the reign of ancient emperors, the culture of this nation began to grow rich and full. In the world of gambling and slot machines there is a rather large number of video slots, the themes of which are devoted to ancient peoples, their values ​​and customs.
Basing on this, EGT represents its new creation – a gaming machine called 2 Dragons, which is dedicated to the Chinese culture, and in particular to powerful mythological creatures – dragons.

The game process of 2 Dragons takes place on five reels with 20 fixed prize lines, so a player can choose any number of them. The main screen of the slot is decorated using a traditional Chinese graphics: on the wallpaper with an appropriate ornament, the drums rotate. The game involves an instrumental Chinese folk music, which makes the whole process even more atmospheric.
As in many other developer`s projects, the profitability of each round depends on a size of your bet and a number of paid lines in the game. Once you`ve determined the bet size, the coin denomination and the lines with the bet / start buttons, you can rotate the reels. The paytable is placed on the left side of the screen in a small, barely noticeable tab “i”. It describes in detail each symbol and an amount of an expected prize, depending on a number of identical pictures. During the rotation of the reels, user settings allow you to turn off and on the sound, and also to expand the game to a full screen.
In addition, it is worth to note a presence of the autoplay function. Moreover, the main prize in this game reaches 400 coins.

To begin with, the game has its very own wild icon. The image that represents it is a golden dragon. As the wild symbol, it substitutes for any other symbol on the reels, except for the scatter icon, in order to form a winning combination.
The game’s scatter icon, in its turn, is represented by a silver dragon. It offers you a payout wherever showing up on the reels. This icon will also help to activate the free spins round, bringing 15 of them. However, this round also has an additional perk. All wild icons here appear as stacked symbols. It provides players with a greater opportunity for creating multiple wins within one spin. The free spins round is played on a different set of reels.
Finally, there’s also a gamble round available within this slot game. It comes into play at the end of every winning combination that you make in the base round, presenting you with a new screen of playing cards. Your goal here is to simply guess a colour of the next playing card to be turned over – red or black. If you make a correct guess, your winnings will receive a double multiplier.