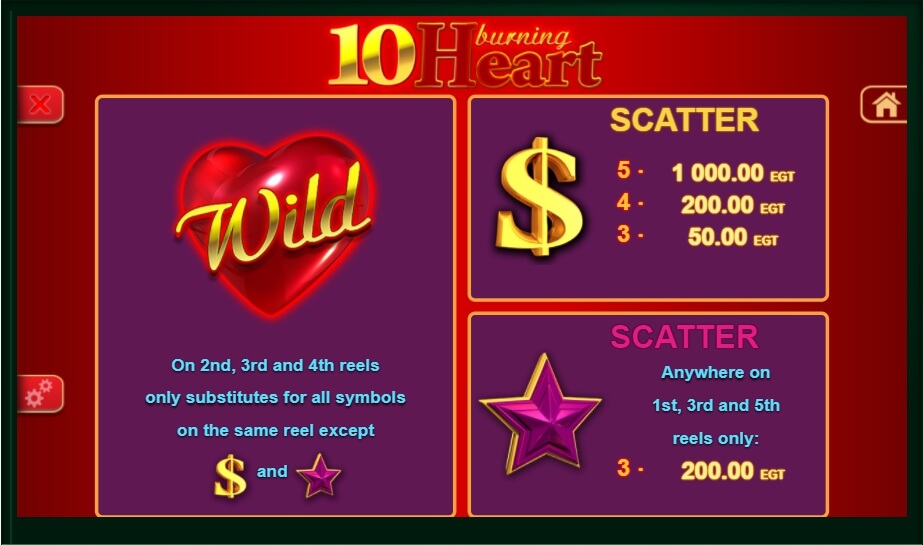 Welcome to the sequel of the well-known game “5 Burning Heart”. This is another bright video slot game of Euro Gaming Technology. It is famous company on the gambling market. There are several reasons why it is so popular – the first one is that this company was the first developer of slot machines on the market. The second reason is that EGT Software keeps on developing their slot games and stays one of the smartest producers. The background of the game is made in juicy red colors, just like a burning heart.

The HD graphics and 3D animation in the game make it not only interesting, but also good-looking. There is no registration and no downloading required to play this slot machine.

To change a bet, just press a button on the bottom of the screen. Such a wide betting range makes it comfortable to play this video slot machine for everyone. There is also a chance to check out how winning combinations are placed on the interface. To do that it will be enough just to press a “Line” button on the bottom of the screen. After that, bright and colorful willing combinations will appear on the interface.

The Autoplay option is also available in this slot game, made by the EGT developers. To turn it on, players have to hold the spin button. There is no limit of the automatically turning on spins of reels.

Burning Heart itself is the most influential card in the game. It can be found only on the second, the third and the fourth reels in the game. It is hard to miss a wild one as there is a “Wild” written just on the heart. It is one of the most expensive playing icons. It also can replace almost all symbols on the screen, apart from two types of scatter symbols.

Of course, there also will be a reward for four and three scatter symbols, but in the smaller amount. The star symbol can be found only on the first reel, on the third and on the fifth reels. There is also a great reward for these symbols. In the end of the game, the multiplier will turn on automatically. It is a card game that is turning on instantly after every lucky spin of reels. The player will be choosing between red and black card. Cash will be doubled automatically if the choice is made correctly.