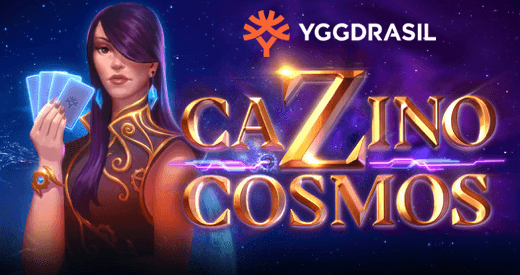 January this year turned out to be rich in new gambling items and a testimony to this is the launch of the continuation of the favorite Cazino Zeppelin in the Yggdrasil slot model. The model, in turn, is equipped with an intergalactic theme, offering a series of unusual features that are sure to suit casino slots players.

Thus, a new slot offers any player to visit the universe located among the stars and galaxies, headed by the strict matriarch Stella. Well, Cazino Cosmos is an excellent opportunity for players to fight face to face with the unknown opponent for incomparable victories and gains in an intergalactic duel.

In addition to the futuristic look of the reels as well as the corresponding character theme, any Cazino Cosmos player can easily access six different bonus games, which include the standard FS mode and five collectible FS modes, each with a unique bonus offering.

The main functions of the FS mode include sticky jokers, which means that all the jokers that hit the reels during FS remain there until the end of the round. Gamblers can also access the normal FS mode by selecting 3-5 scatters, and thus open 10-20 FS.

Each of them triggers a round of FS with a unique additional function, which in turn provides the game with either additional jokers or FS, wild symbols or high payouts that turn into a joker.

It is also worth noting that the head of the slot model department at Yggdrasil, Jonas Strandman, was quick to announce that Cazino Cosmos is a special slot for him and his team, because Cazino Zeppelin appears one of the most successful games in the company’s history, and its huge potential continues to live in new releases like Cazino Cosmos.