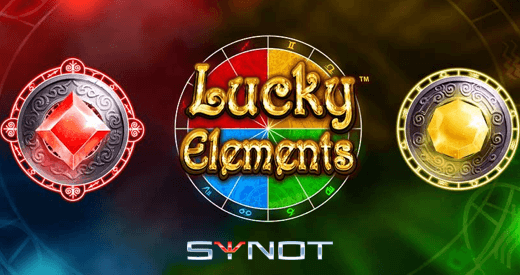 Water, earth, fire and air – these are the major natural elements that could just as well turn into life-changing components helping you to win big during your next gaming session.

Lucky Elements slot is a fabulous gaming tool where the scene is set in an astral world with 5 reels and a total of 243 different ways to hit prizes. In addition to the basic components taking the shape of precious valuables hiding each of the natural elements, the game also features a few bonuses that have the powers of re-shaping certain elements of nature. There are three bonus icons in total allowing you to play the extra round. Each bonus stands for one life during the bonus rounds. Respective colors are suggested to increase all symbol values presented on the wheel.

Here you’ll get a chance to establish harmony between different elements finding a balance between yin and yan and gaining wealth all along.

The developers of this game admit that by contrast to their action-packed games filled with adventurous turns and twists, this gaming tool has a much more soothing gameplay, but it is still added with various fascinating bonus rounds that have not yet been seen in the products from SYNOT Games. Wheel of Lucky Elements is a newly invented option, which was inspired entirely by the Wheel of Fortune feature. Obviously, this game provides all chances to win big and the only question here would be how much you’ll get during your gaming leisure time.

Spin the beautifully embellished reels and discover what awaits you in this fascinating game allowing every gambler to grab some big wins to one’s pockets.