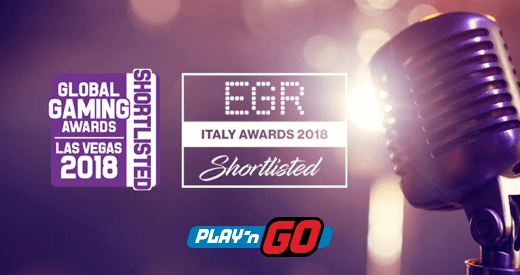 Four Awards in a Row for Play’n’Go

Play’n’Go have recently announced that they are feeling extremely glad to have been nominated not even for one, but for four awards in a row as a sign of their recognition by the industry. It became known that EGR Italy and the Global Gaming Awards located in Las Vegas as the heart of gambling have granted Play’n’Go a unique chance to receive two honors individually during the approaching special events that are going to take place in autumn this year.

It is widely acknowledged that EGR Italy Awards are generally held annually in order to mark the “perfection of the Italian gaming market for the previous 12 months”, while the Global Gaming Awards are generally perceived as “the most reliable honors across the entire segment”. The Play’n’Go representatives admit that they feel honored to be nominated for these two awards and they perceive it as a sign of their appreciation and continuous progress inside the gambling-powered market.

As for the EGR Italy, in this case the company was granted two categories, namely – Mobile and Casino-Related Content Supplier, while the Global Gaming Awards included the Slot of the Year honor for their technologically advanced game Hugo Goal as well as the Product Innovation of the Year that was obtained for their all-new gaming software solution – OMNY. The director behind the company admitted that he was happy to have received these honors and he believed they signified the appreciation of their high performance on the market and the premium quality of their content.

He said that it was extremely pleasant to be nominated for so many awards consecutively! At the same time, they will continue delivering the superior content to their customer base and the honors they have obtained just prove they are doing well inside this segment. The mentioned honors are going to be given out in October this year. Good luck, Play’n’Go!