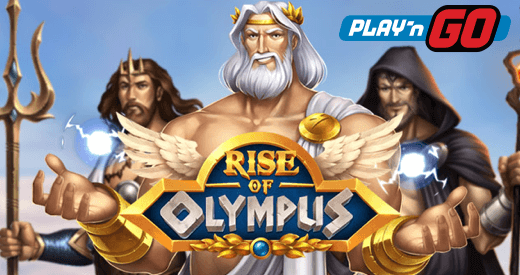 Rise of Olympus by Play’n GO

Play’n GO gaming provider has proclaimed the launching of its most recent slot that is now accessible to the gaming community – Rise of Olympus. This video adventure is grounded on the idea that the legendary Greek gods were truly almighty and powerful.

Rise of Olympus permits casino enthusiasts to experience the powers of such world-known mythological godly creatures as Poseidon, Zeus and Hades. Your task would be to help them in their search for greater power and wealth. This video slot has the identical structure as a few other previously launched titles including Sweet Alchemy among many others. This is truly the kind of sphere where Play’n GO exceeds all expectations of the gaming-inspired community.

The idea of the new game originated from one of the most widespread mythological stories in the entire history. This gaming product has been designed with much skill and talent incorporating a few truly unique features that are peculiar to the world-known godly characters.

Among others, the game allows adding a unique icon to each of the characters, while the bonus option is grounded on the characters’ exceptional range of powers, which allow gamblers to hit big-sized winnings and set on a journey towards discovering one of their most beloved mythological gods.

The director behind the company admitted that they have made sure each detail of the game is eye-catchy and brings maximum satisfaction to users. He claims that every one of us knows perfectly well what the Greek mythology is like. Therefore, if a company wishes to create a game based on this theme, they should know how to do it correctly. He himself believes that much focus has to be placed on the kind of characters utilized to capture the attention of users. The uniqueness and exclusivity of such gaming elements would improve one’s gaming leisure many times.

He is also of the opinion that the overall design of the world-known godly creatures should be without any flaws. He said that the godly creatures themselves are indeed extremely popular with the global community, and it could serve as a hindrance towards making them exclusively styled and unique. The major idea here is to turn them into long-familiar characters that would allow recognizing each and every mythological creature. It is not quite a simple task to find the proper balance, but the director of the company considers that their developers have done a great job and have incorporated all their sacred ideas into reality.