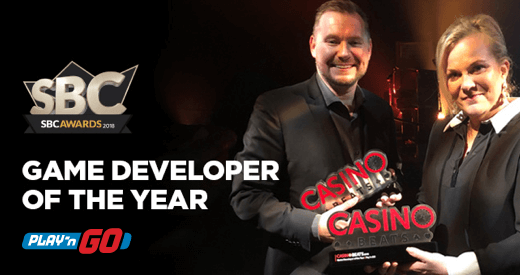 The beginning of December was marked for Play’n GO in gold, because the company received such a desirable award at the SBC ceremony. The celebration took place at The Artillery Garden at the HAC in London.

2018 has become the fifth year in a row as the award aiming to recognize and inspirit outstanding providers, branches and operators in the field of gambling for their efforts and innovations is being held.

This time, Play’n GO became appreciated as Game Developer of the Year, which appeared another important achievement after the company’s triumph at the Malta Gaming awards, where it has gotten a deserved prize in the Games Vendor of the Year nomination.

The year has generally become fruitful for Play’n GO, considering that the company has gained more than one significant victory, which has noticeably strengthened its position in the market, offering to become a powerful player and a worthy opponent for the leading suppliers in the industry.

Johan Törnqvist, the CEO of Play’n GO, in turn, noted the high value of the victory for the company’s reputation, as the triumph like nothing else reflects the provider`s efforts and dedication in developing its own ultimate content.

He also hurried to add that obtaining the title of such a high level testifies to the honesty of the provider, stressing that Play’n GO customers always get what they are promised.

Besides, Mr. Törnqvist thanked all the employees of the corporation for their interest, hard work, dedication and outstanding skills, because it is these components that make the company evolve and make headway.

Moreover, during the interview it became clear that the leadership of Play’n GO has huge plans for the following 2019 year. So wait and see!